Available on PS4 (version tested), PC – VR required
Originally released on Oculus Rift a while back, Valkyrie has you playing as a cloned fighter pilot for a space pirate gang called Valkyrie. When you die, your consciousness is uploaded to another clone and you go again, swiftly side-stepping the whole ‘respawning’ thing with a sneaky narrative device. As this is, for the most part, a multiplayer online space combat game, you’ll be respawning a lot. It follows a fairly straightforward, tried-and-tested formula of arcade controls, team deathmatch modes and unlockable upgrades – it’s really nothing we haven’t seen countless times before. However, this is a genre that lends itself to VR extremely well. Hell, it may even be a perfect fit.

The added immersion that VR brings to the table is clear from the off. Being able to look around your ship, out into space to see enemy ships and lasers shoot past your cockpit draws you in far quicker than any non-VR space combat experience. But being “in” EVE Valkyrie also affects the gameplay in a really smart way. Being able to actually follow an enemy spaceship with your view as you fly your ship is really useful, obviously, but this eye-tracking is also how you lock-on with your homing missiles.

Expert pilots will enjoy the freedom this allows during combat, as you can aim your cannon with your Dualshock 4 sticks and your missiles with your head. This control scheme also gives beginners a gameplay reason to constantly look around at the space chaos – something they wouldn’t be able to do without the help of virtual reality.

There are a few single-player missions, called “Chronicles”, which essentially act as tutorials for the different craft you unlock as you rank up in multiplayer, but the main meat of the game is the player-versus-player combat. Until you hit level 5, you’ll be teamed up with other players but pitted against a team of AI ships. After that, you’re against other real pilots.

One of the main issues with Valkyrie is that, try as the developers might, it’s very hard to get a load of variety into maps that are in space and have to house two teams of eight different ships. Oh look, it’s the one with the asteroids! Oh look, now it’s the one with the wrecked spaceship in the middle of it all! There are a few things that you’ll notice after a few plays of each one, but on initial viewing there’s not a huge amount of stuff that clearly defines them.

Like almost all games of EVE: Valkyrie’s ilk, once you’ve picked the right loadout for your playstyle, gotten used to a few of the levels and – better yet – managed to get a few mates together to communicate with while you play, it’s hard not to enjoy this. Conversely, when it’s all going wrong, firing up this game becomes an exercise in frustration. 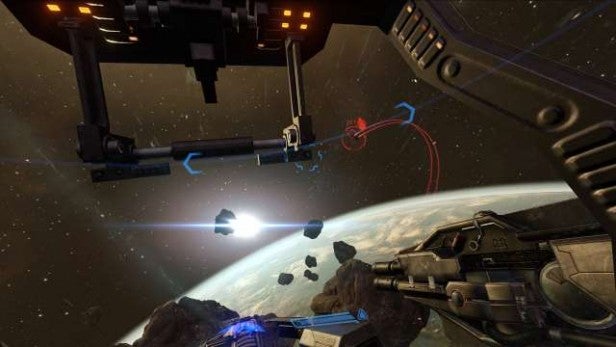 There was a free add-on released for the Oculus version in June and it’s included in this release of the game. It adds a new map called “Crossroads”, and the brilliant “Carrier Assault” mode. Both teams have to defend their carrier, which contains the spawning equipment for their clones, from the other, by taking part in three stages of space combat. The final stage has you doing a Death Star-esque trench run, and although this lacks that music, those sound effects and those exact visuals, it’s hard not to be swept along for the ride as you come pretty close to recreating that icon scene. Only you’re in it. No, really, you’re right in it. Right in the bloody thick of it. “Stretch out with your feelings…”

A handful of titles released alongside the PlayStation VR headset have been positioned as full-price products, costing 60 quid for the most part. Most VR titles are shorter, enjoyable “VR experiences” and are priced as such. So when you slap the big bucks on a VR game, there’s going to be a certain expectation when it comes to content and, to be honest, for the money EVE is lacking in scope. The actual game itself is brilliant, but a handful of maps scattered across three admittedly entertaining modes is a big ask for 60 whole pounds. Especially when you’ve got cast-iron belters like REZ: Infinite costing half the price.

There’s also the somewhat shady microtransactions. You earn silver by playing games and, as is always the case with these things, buying the good stuff is going to take quite a bit of playing to rack up enough silver. Gold, which is only available when you buy it with actual, real-life money, will buy you everything a lot quicker. Consequently it’s a bit galling when you’re blown up by someone with a load of way better firepower than you and you’re left wondering if he slowly earned all that stuff or just dropped a bunch of money on it. On top of his 60-quid videogame, of course. 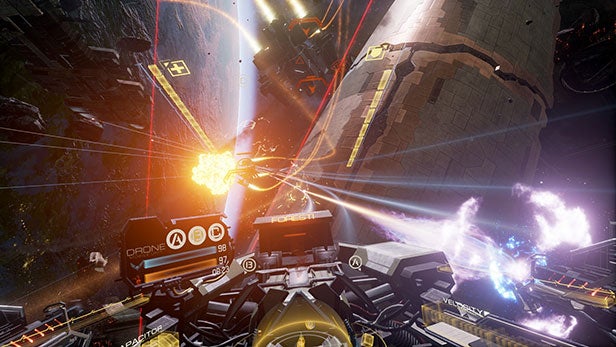 It’s a shame, because CCP have stated that all additional content, such as maps and modes, will come to Valkyrie for free.

Of course, from the very second PSVR was announced, our minds started racing. “How long is it going to be before we get to be in Star Wars?” we all thought. While there is a shorter “experience” coming to Star Wars Battlefront in the next month or so, EVE Valkyrie is going to be what you turn to to scratch any space dogfighting itch for the foreseeable future.

Unfortunately, a lack of maps and modes means it’s hard to wholeheartedly recommend at its high price. This, coupled with some fairly mercenary microtransactions, take the sheen off an otherwise excellent PSVR launch title.

However, the microtransactions can be avoided if you don’t mind being in this for the long haul, whilst the developer has said that there will be more content coming to the game in the coming year for no extra cost.

Ultimately, EVE Valkyrie is a lot of fun and still a welcome addition to the PSVR lineup.