Since the BT Whole Home Wi-Fi is an access-point-only system, I had to set up the test rig a little differently from my usual setup.

Rather than setting up the first disc as you would a router, I hooked it up to another router to get things started. For this task I chose the TP-Link C3150, since it’s fast and has gigabit Ethernet I disabled its Wi-Fi before beginning my tests.

Both router and disc were placed on the ground floor of a three-storey, brick-built, semi-detached house, over to the side where the telephone cable enters the building.

This configuration normally results in single routers providing a mid-strength, half-speed signal to the middle floor and either a much slower connection to the top floor or it won’t even reach, depending on the router and exact test location.

The second disc was then placed at the centre of the middle floor, and the third on the top floor. The BT app reported back that all were decent locations with good signal.

Testing was via LAN Speed Test, with one laptop acting as a server attached to the router via Ethernet and a second laptop connected via the Wi-Fi. 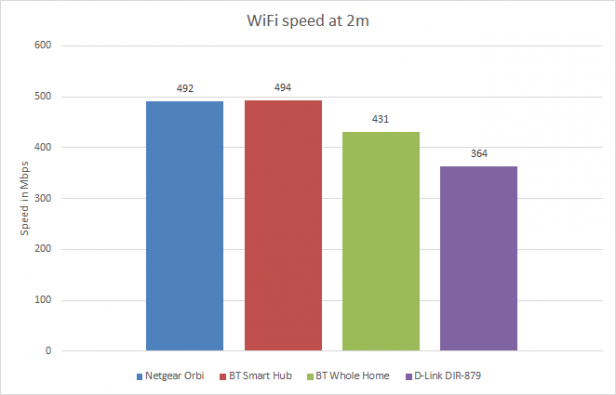 To start I tested the peak speed of the setup by standing 2m from the first disc – and it produced impressive results. With peak throughput of 459Mbps and an average of 431Mbps, it competes well with other high-end routers, showing that raw performance of the BT Whole Home is good. 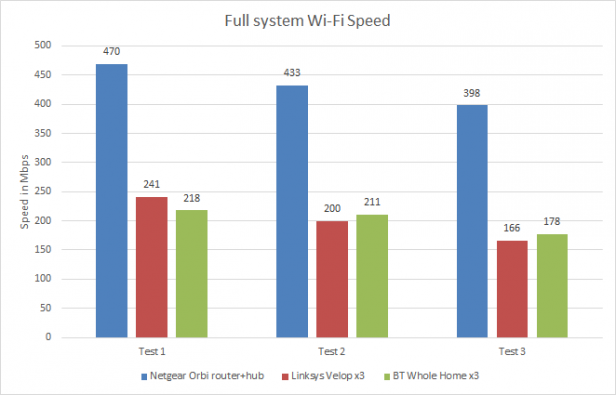 It’s clear that, like the Velop, the BT Whole Home suffers from not having the Orbi’s single dedicated 4×4 5GHz band purely for high-speed communication between its router and hub. The Linksys and BT systems simply can’t keep up.

In order to get a fuller understanding of the system’s performance, I tested again using just one Whole Home unit, then with two, then three.

By testing in this way, two things became clear: first, the Whole Home doesn’t seem to have quite the power of the Velop and Orbi – noticeable particularly in the single unit setup. And second, it seems to favour connecting at a slower speed, even when it’s perfectly capable of delivering more. 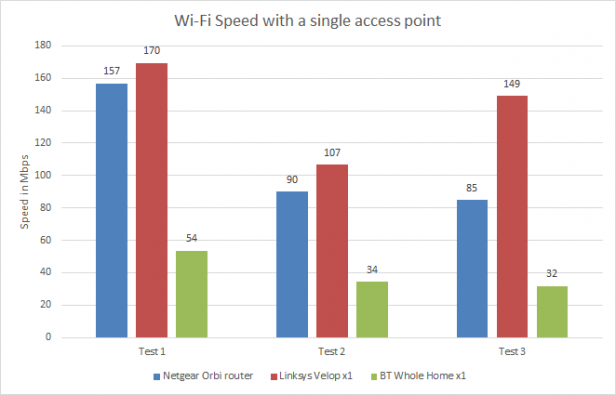 The second point was highlighted even more by simply roaming around the house, which forces the system to connect you to different discs as you move around.

Doing so regularly resulted in a strong but not particularly fast signal, even when I was within line of sight. But, by disconnecting and reconnecting it would reconnect at a faster rate.

This is true of other mesh router systems, but the BT seemed to favour signal strength over speed far more than usual. Moreover, in my specific test locations it stubbornly refused to connect via a faster route. 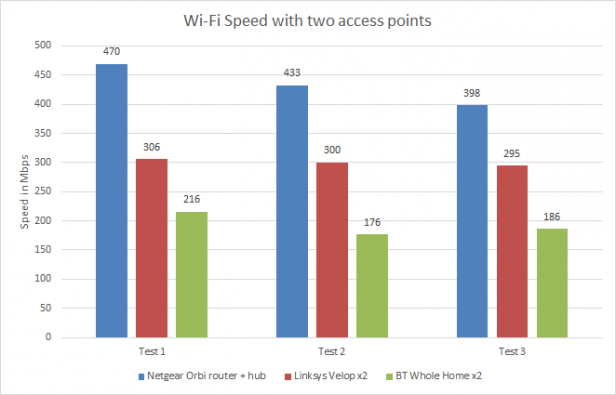 Also, as hinted at the start of this review, it’s pretty clear that a two-disc version of the Whole Home would indeed be sufficient for my three-storey house, so it really is a shame that BT doesn’t sell this cheaper option as many people don’t need three. 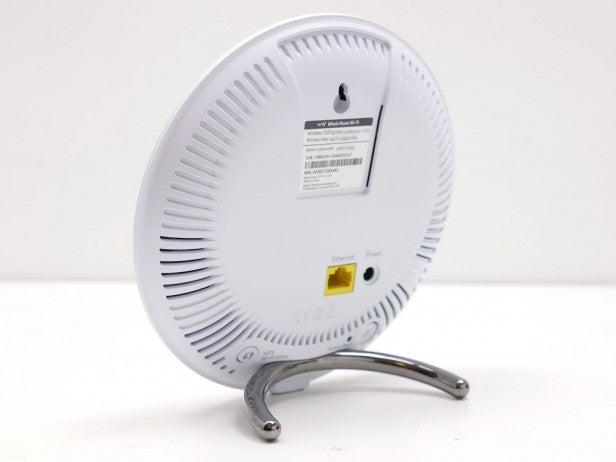 Should I buy the BT Whole Home Wi-Fi?

The BT Whole Home Wi-Fi does exactly what it says it will. It effortlessly provides reliable, fast Wi-Fi coverage for your whole home (within reason). It will reach far further than any single router, and avoids all the hassle of traditional Wi-Fi extenders.

What’s more, it does this for a lower price than most other “whole-home” systems; it’s £50 cheaper than the Netgear Orbi, and £200 cheaper than the three-node Linksys Velop system. There are cheaper whole home systems available, but not ones that provide the sort of Wi-Fi speeds of these three systems.

However, the Whole Home isn’t perfect. It’s a basic system that provides none of the extras of more traditional routers – and, in fact, it requires a separate router to work.

As such, if you’re looking to upgrade your whole home networking setup then the Orbi or Velop will serve you better. However, if you’ve already invested in a feature-rich router – or run a home-made router – then the Whole Home could be a great addition.

The BT Whole Home Wi-Fi outclasses any normal router when it comes to Wi-Fi coverage – and for a tempting price. It requires an existing router, though, and other whole-home systems are faster and more feature-rich.