Powerful and good value, BT Complete Wi-Fi is a decent upgrade for those with older routers – but it isn't particularly feature-rich.

What is BT Complete Wi-Fi?

The BT Whole Home Wi-Fi Mesh system proved to be a big success. Generally fast and well priced, it made for a decent upgrade for those with an existing router they didn’t want to replace. With the BT Complete Wi-Fi, BT is offering a neater solution: a new router for the base connection, and discs that you spread around your home to improve the signal.

Available exclusively to BT Plus customers, Complete Wi-Fi gets you a BT Smart Hub 2 router and a single Wi-Fi disc for boosting the range of your wireless network. If dead spots remain then customers can order up to two more Wi-Fi discs free of charge. If you still can’t get a signal everywhere, then BT will give you £20 back.

BT says this guarantee was in response to a survey that showed how much families rely on Wi-Fi. According to the survey, 43% of people believe poor wi-fi restricts life at home and 52% of families are put off living in, or buying, a house with wi-fi black spots.

Faster network speeds and a cost of just £5 per month for BT Plus customers make the BT Complete Wi-Fi a worthy upgrade for existing BT Smart Hub owners. Now, the system is also available to standard Ultrafast and Superfast BT Fibre customers for £10 a month. While the system is good value, its limited configuration options in the router’s main interface detracts slightly.

BT Complete Wi-Fi was originally available for BT Plus customers. With BT Plus you get a Keep Connected promise, where the company will send you a 4G router should your broadband go down, keeping you online until the fault is fixed. Take out a mobile contract alongside and you get double data, with the Keep Connected promise extending here, too: if your main broadband goes down, your phones receive unlimited 4G for the duration of the issue.

Now, the system is also available for standard BT fibre customers on Superfast or Ultrafast contracts. The main differences are that you no longer get the data connection promise that you get with Plus and the price doubles to £10 a month. However, you still get the Wi-Fi promise, and BT will send additional discs if you’re having problems getting a connection anywhere in your home.

The BT Complete Wi-Fi system comprises of the Smart Hub 2 and a single Wi-Fi disc designed to extend wireless range. The Smart Hub 2 is an evolution on the previous router’s design. Externally, it looks fairly similar, but the status lights have moved to the centre of the disc.

As far as routers go, the Smart Hub 2 is inoffensive and should easily fit into your home. Like the previous router, on the rear is a pull-out reference card, which shows you the default secure wireless settings. It’s handy, particularly when you have guests and want to give them your network password. 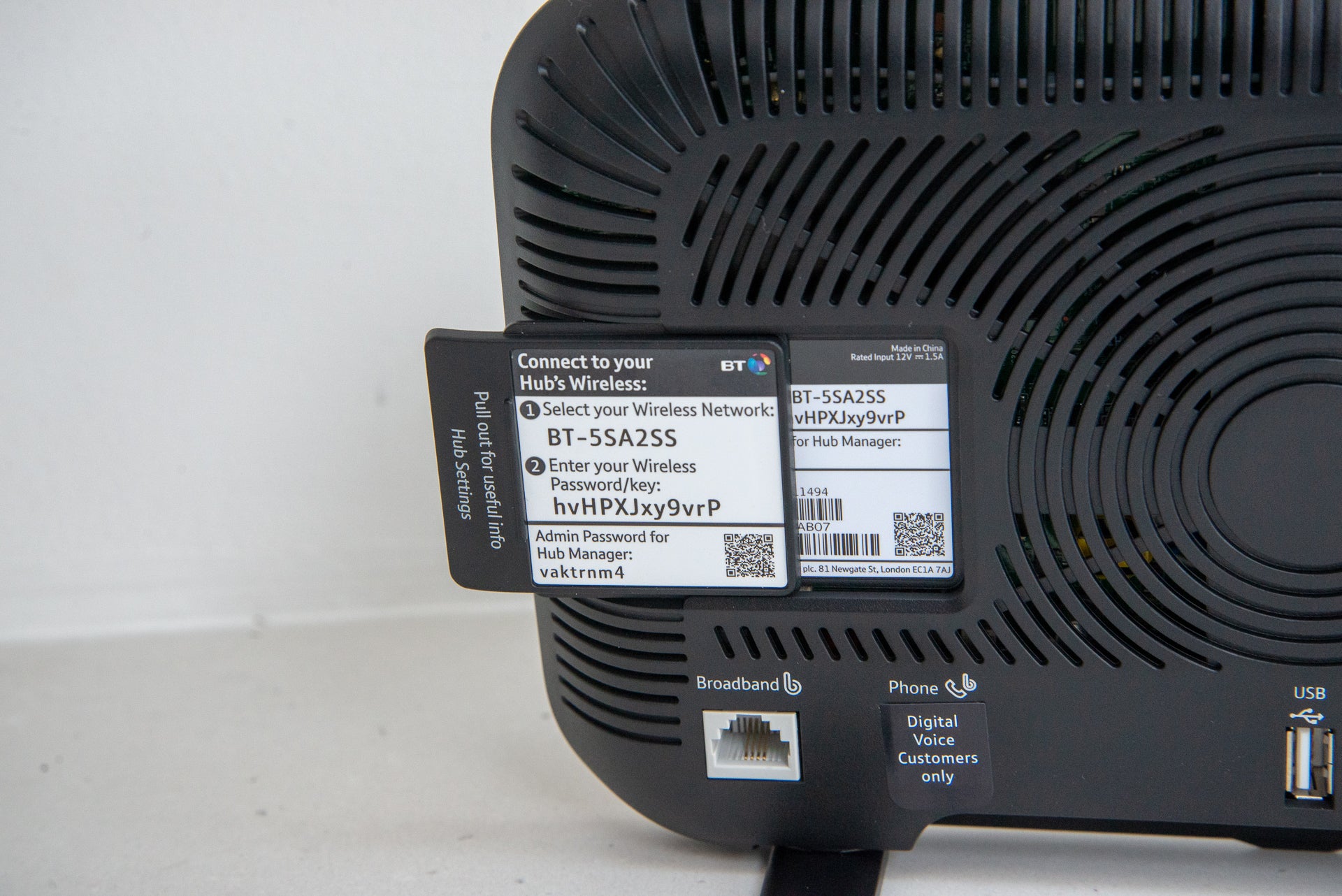 Around the back of the router are four Gigabit Ethernet ports for adding external devices, a USB device for sharing external storage and a single RJ-11 port for your internet connection. 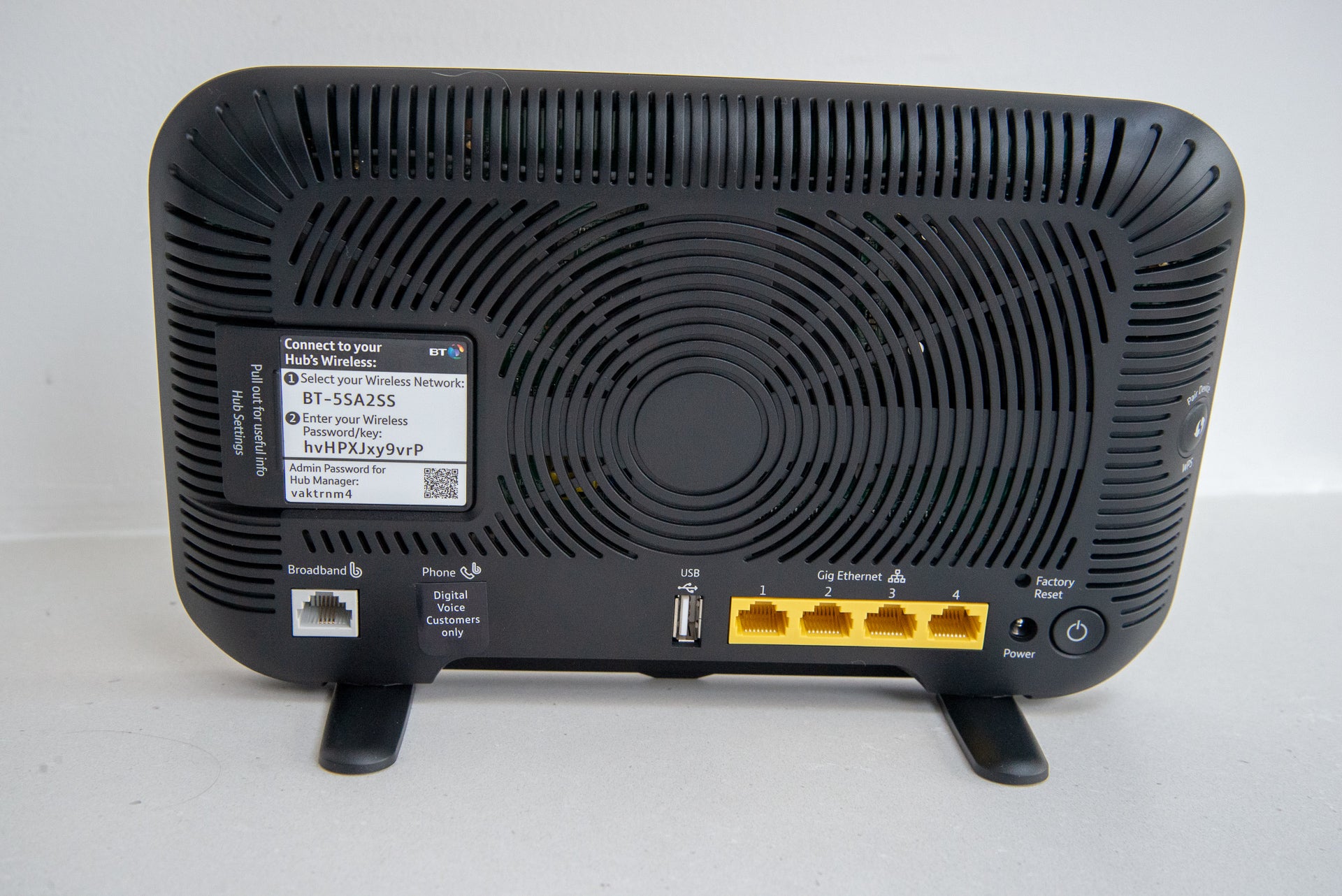 The use of RJ-11 might be slightly disappointing for some. For example, I have an Openreach modem in a cupboard and run an Ethernet cable from this to where I want to place the router behind the TV. Moving to RJ-11 only meant that I had to install the Smart Hub 2 in the cupboard instead.

The disc looks similar to that available with Whole Home Wi-Fi system, only this time around the disc is black and it doesn’t have the pull-out card with the Wi-Fi details written on it. 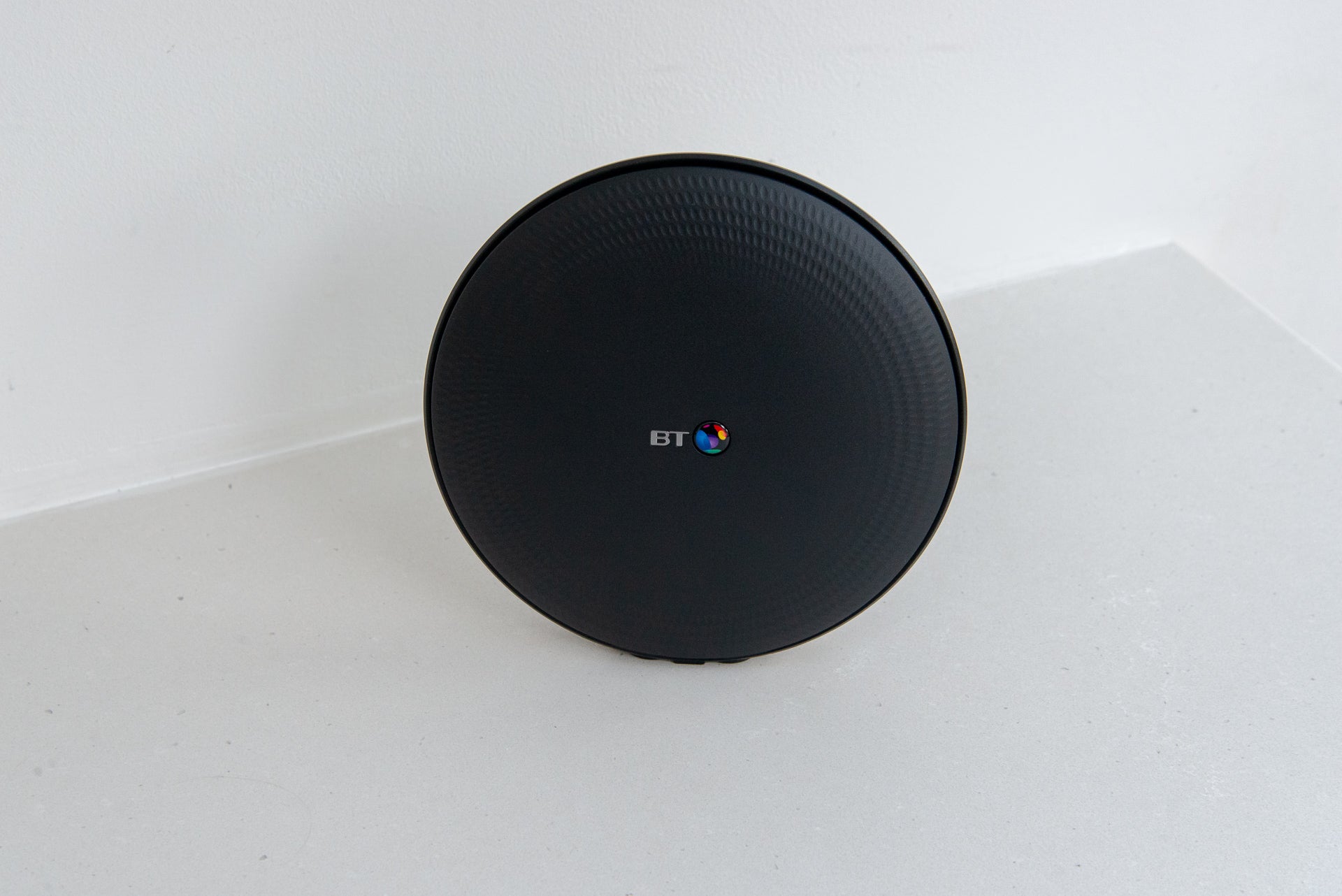 BT Whole Home Wi-Fi isn’t compatible with Complete Wi-Fi; you can only use the new discs with the existing system. Given that BT will send you up to two more discs for free, this isn’t really a problem: with a fully-loaded Complete Wi-Fi system you end up with four access points (three discs and the router) compared to Whole Home Wi-Fi’s three discs.

BT Complete Wi-Fi is set up and configured through the new My BT app, rather than having a dedicated app of the type seen with the Whole Home Wi-Fi system. It takes you through configuring the router and then finding the best spot to place your discs.

Ideally, it should be possible to place and configure the discs wirelessly, but that didn’t work for me. Instead, I had to plug the disc in via Ethernet directly into the router for configuration. Once installed, the disc worked just fine on moving it back to its main location. If you’ve got more than one disc, you can repeat the process to get these installed, too. 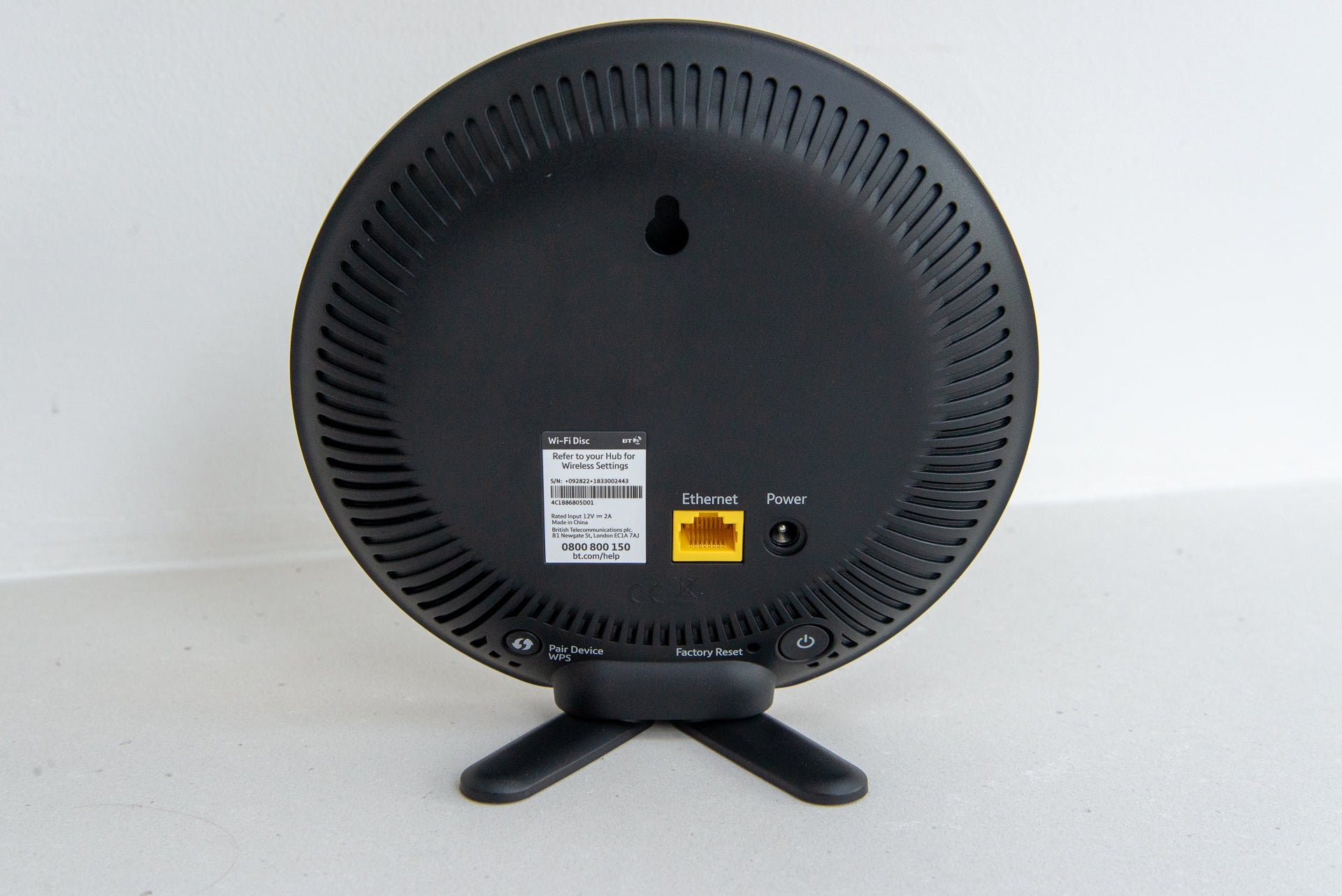 Once the disc (or discs) are installed, you can use the app to manage your system, but note that there aren’t many options available. You can turn down the lights on your router and discs, or turn them off completely. The latter option makes sense if you have a disc in a bedroom and don’t want to be disturbed by any flashing lights. Note that the lights will come on to warn you of any problems, however. 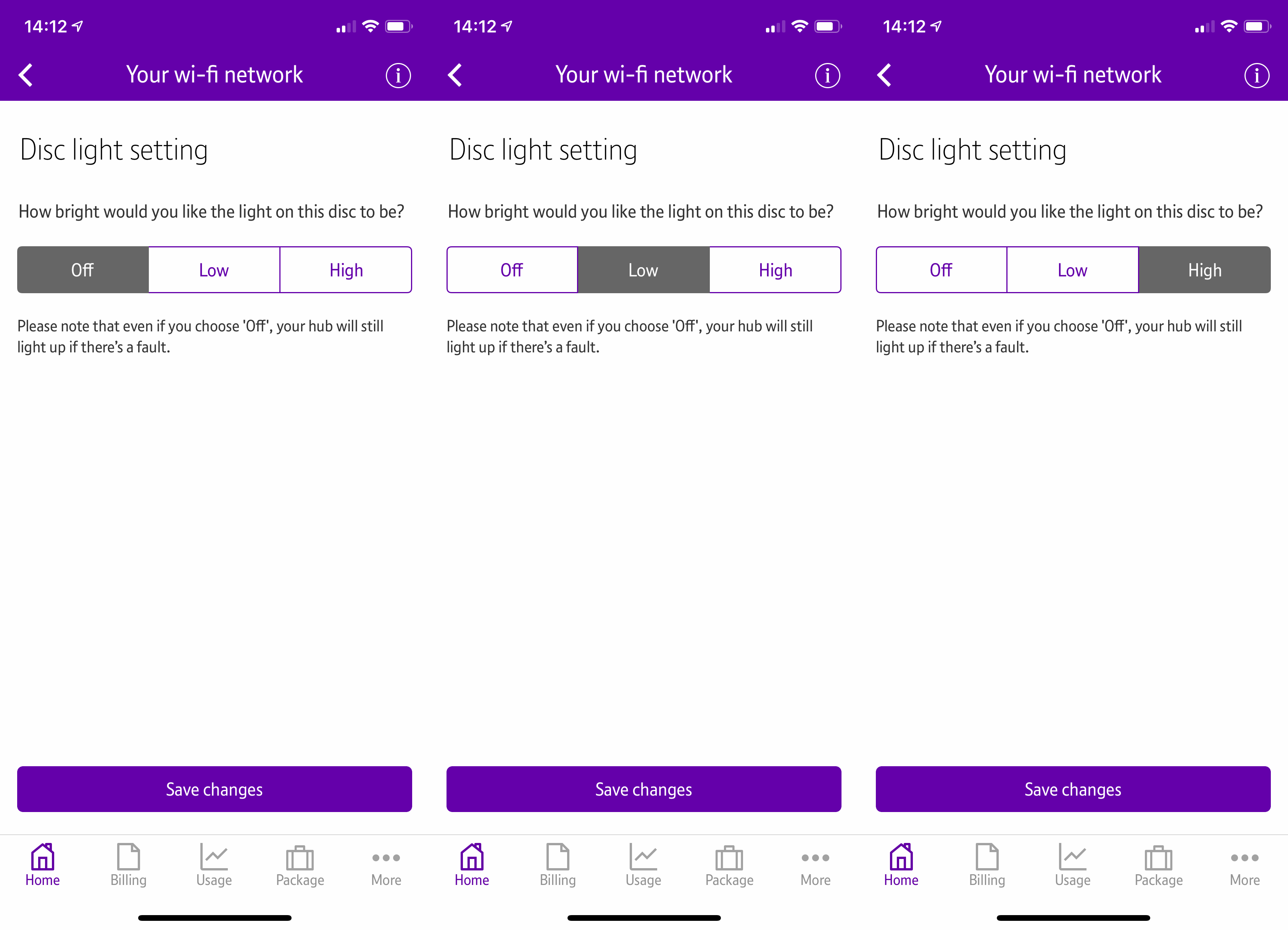 From the app, you can also change the network name and password, and that’s about it. There’s currently no option for a guest network and the app won’t let you control simple things such as port forwarding. BT has said that additional features are being worked on, so things like Guest networks should be an option in the future. 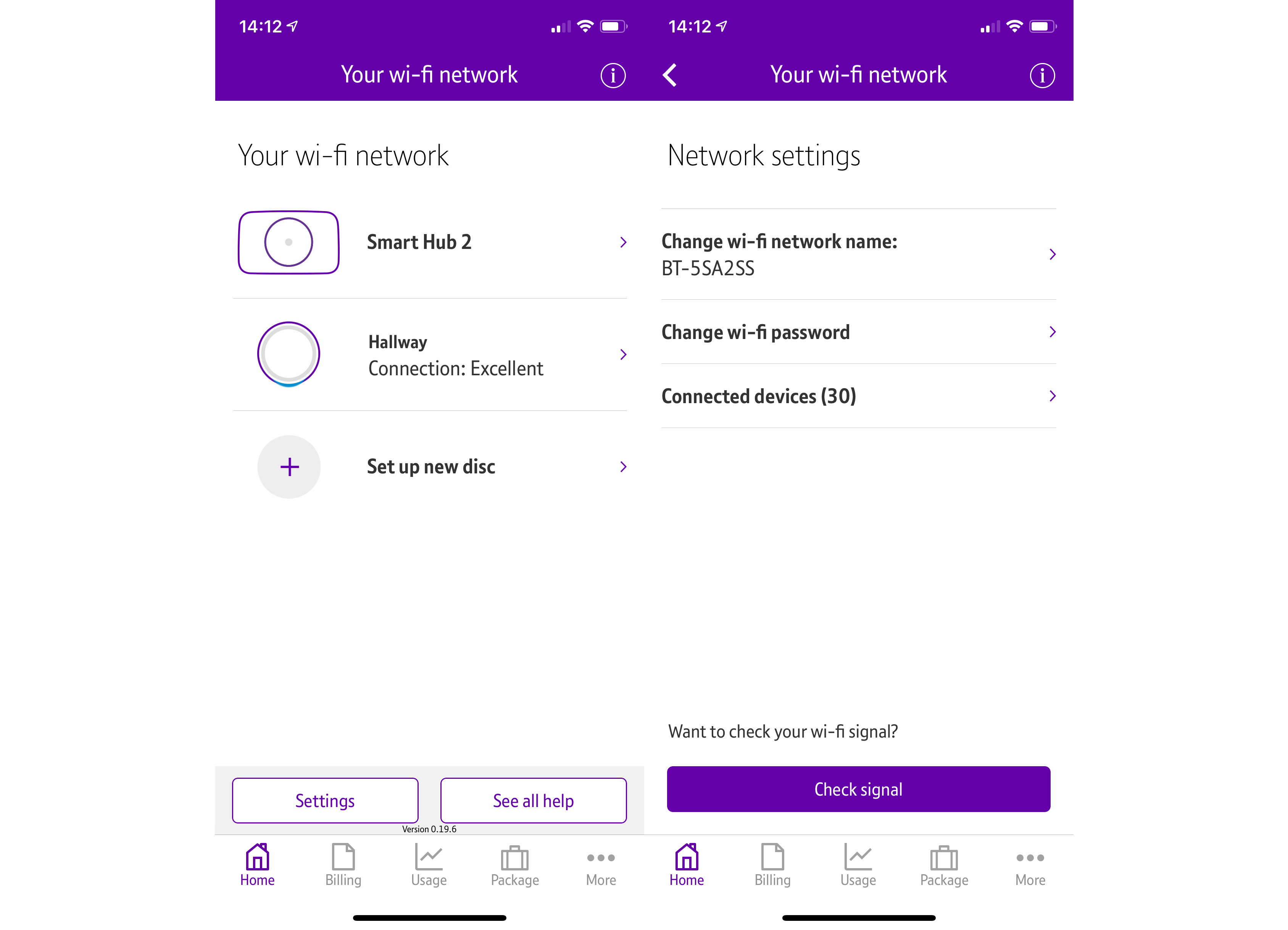 The Whole Home Wi-Fi system launched in quite a basic form, too, only for new features soon added via online updates.

To change more advanced settings, you have to go into the web portal. This, too, is fairly basic, but from here you can change the wireless networks from being on automatic channels to one that you set. This can be useful if you find that you run into interference problems with the automatic settings and want to lock your configuration. 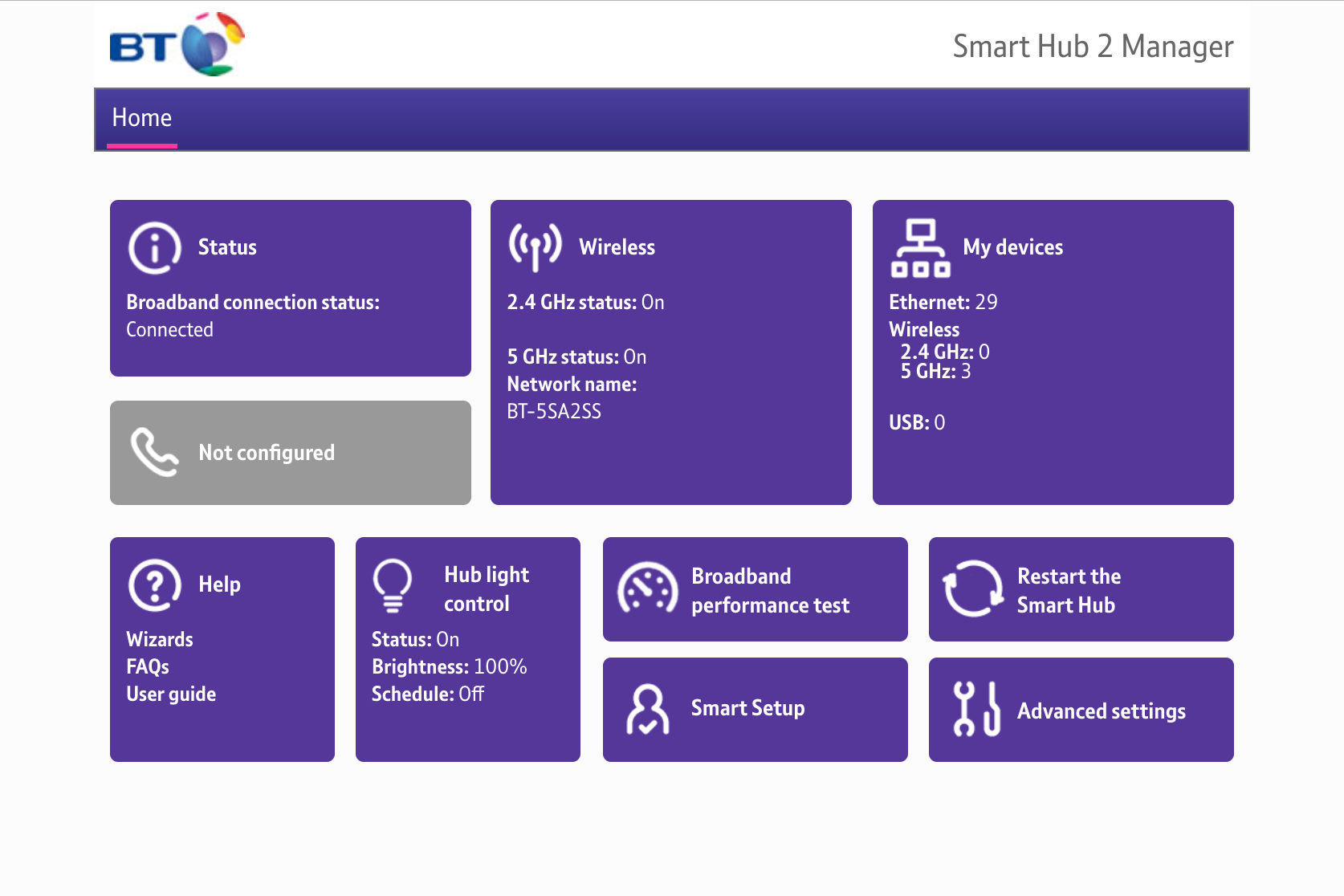 Port forwarding is available through this interface and is the only way to configure any rules you need.

I recommend turning off Smart Setup. This feature redirects new devices that connect to a page about configuring other BT services and is particularly annoying.

Parental Controls is available through the My BT online portal. Once enabled, the rules apply to all devices connected to your network. It’s a shame that you can’t create profiles for each family member, grouping together all of their devices. This would offer greater control, including individual filtering levels and setting when each family member can go online. This puts BT Complete Wi-Fi behind the competition.

Of course, BT TV YouView is supported out of the box, so you can stream live channels such as BT Sport without needing to configure functionality.

As is usual for mesh systems, the BT Complete Wi-Fi system combines the 2.4GHz and 5GHz networks under one name, using band-steering to direct connecting clients to the best network for their capabilities and range. The system will also push clients to the strongest disc to maintain performance as you roam through your house.

That compares well with the Netgear Orbi RBK50 system, although that pulled ahead at 10 metres on the second floor, with the tri-band system proving to have a bit more power at range. 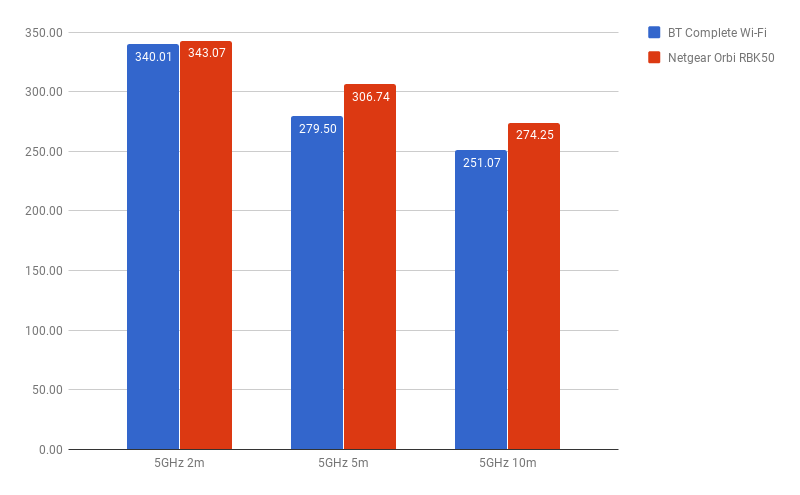 Why buy the BT Complete Wi-Fi?

Throughput from the BT Complete Wi-Fi managed to keep up well with the Netgear Orbi RBK50, with both systems using one router and a single satellite/disc. Given that BT Complete Wi-Fi costs just £5 per month for BT Plus customers, it’s a great upgrade for anyone running an older hub. At this price, it would take more than four years for BT’s system to cost you more than the Orbi.

At £10 a month for standard fibre customers, the system’s not quite such good value, and it would take just over two years before the system become more expensive than an Orbi. That’s a little closer to call, and while the BT Complete Wi-Fi is far better than the older BT routers, you’ll need to think a little more carefully before you buy.

However, there is a caveat to all of this: if you need more than one disc. Thanks to BT’s coverage guarantee, if you’re suffering from any deadspots in your home, you can get up to two additional discs for no additional charge; with an Orbi system, you have to pay for additional satellites.

For both Plus and regular BT customers, there are other things to think about. While the BT Complete Wi-Fi is fast and easy to configure, it’s lacking in many features. There’s no guest network at the moment and no way to set individual parental controls.

Satellites only have a single Ethernet port, too, making them less useful where you need to hook up further wired devices. For those who want more control over their networks, greater features and more Ethernet ports, the Netgear RBK50 remains the top choice. Its app is better, it has a guest network and parental controls are available for individual family members. It’s a touch quicker, too.

All that said, if you want something simple, fast and cheap – and have a BT broadband connection – then the BT Complete Wi-Fi is a great choice.

Powerful and good value, BT Complete Wi-Fi is a decent upgrade for those with older routers – but it isn’t particularly feature-rich.