I'm enjoying my time with Bravely Default 2, even if a few notable issues hold it back from being a true JRPG great. However, such issues don't detract from a thoroughly engaging core experience, which builds upon the original game in delightful ways.  Genre purists will arguably look past many of its shortcomings, much like I have, and once you do, the opening chapters tease a journey that will only grow stronger as I press on. Bravely Default 2 could certainly be one of the strongest Switch games of 2021.

Bravely Default 2 is a grandiose RPG adventure in the vein of classic Final Fantasy and Dragon Quest, where you and a small group of adventurers embark on an epic, world-spanning journey.

The original Bravely Default was a successful reminder to Square Enix that fans are clamouring for classic experiences, those that hark back to the RPG genre’s origins while also building upon it in new and distinct ways. It was gorgeous, challenging and ambitiously creative in every conceivable way. Its sequel aims to continue such a beloved trajectory.

After spending dozens of hours with the game and triumphing over its second chapter, I’m happy to report that Bravely Default 2 is largely successful in this goal. However, fumbles in a few key areas will definitely prove divisive among fans. The cutesy aesthetic loses much of its charm on more powerful hardware, and the cast simply isn’t as likeable as its forebears.

Such flaws do have a negative impact, but the signature JRPG feel remains intact, and this identity transfers over to exploration, grinding and travelling the world in search of ancient crystals. It’s old-school Final Fantasy in everything but name, and comes with all the baggage you’d expect from this moniker. 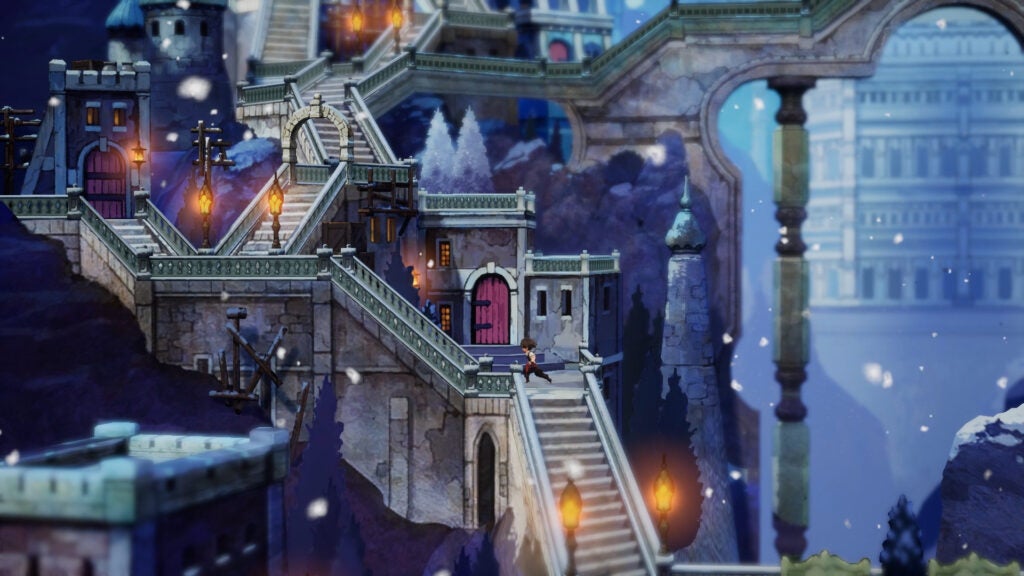 Bravely Default 2 is knowingly cliché in a number of ways, unafraid to abide by established genre conventions, largely because this is what many of its players will be expecting. You play as Seth, a young man from a distant land who finds himself awakening upon a beach. His memories a blur, he ventures towards a nearby settlement to gather his bearings.

Saved by the powers of a legendary crystal, Seth soon befriends a disgraced princess and her elderly mentor, both of whom require help to gather said crystals and restore order to the realm. It isn’t long until our hero stumbles upon a duo of mercenaries – Adelle and Elvis – who are surprisingly easy-going when asked to tag along.

Within the opening hours, the cast of characters tasked with carrying this entire adventure is formed. Compared to the original Bravely Default, they aren’t nearly as charming or dripping in intrigue that’s begging to be uncovered in respective backstories. However, such a flaw could be addressed in later chapters as the narrative unfolds into something more compelling. Right now, it’s a tried-and-true tale of stopping evil-doers.

Bravely Default 2 doesn’t try to be something it isn’t, aiming to take you on an adventure that abides rigidly to a formula we’ve been accustomed to for years. This is both a blessing and curse, especially when cracks begin to show in its rather pedestrian mix of exploration and turn-based battles. Despite my reservations, I still find myself hooked. 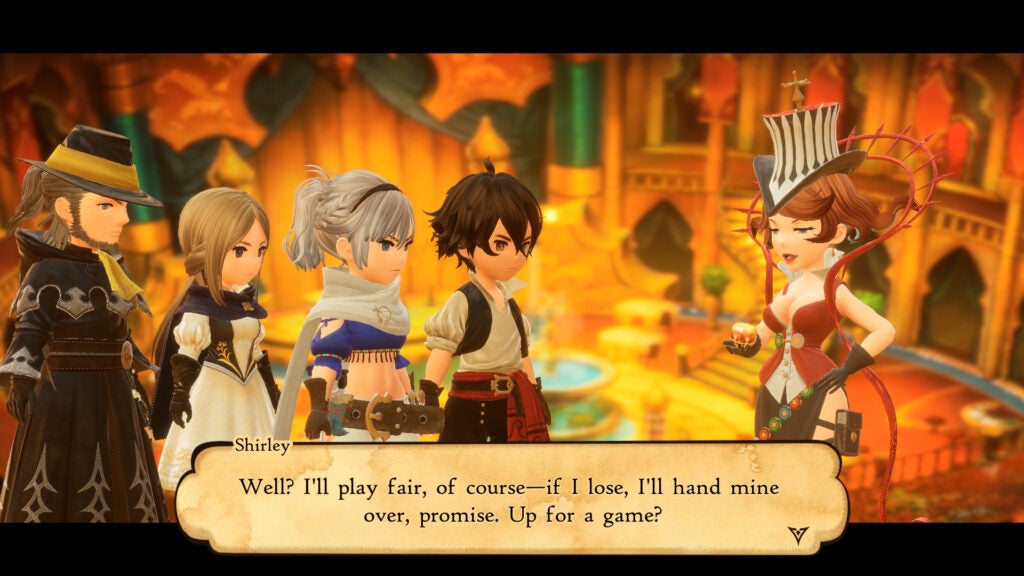 I can only talk about the first two chapters, but Bravely Default 2 immediately hurls you into the inner workings of its combat system. It remains mostly unchanged, with its titular mechanic allowing players to “Brave” or “Default” in order to perform several moves in a single turn, or bank them for later use. It’s a compelling strategic mechanic that shakes up the turn-based battles.

Learning the strengths and weaknesses of a boss encounter is no longer the only recipe for success. Enemies are also capable of banking moves for later use, meaning they can unleash an avalanche of deadly abilities on your party if you’ve failed to account for your own defenses. It takes some getting used to, as I immediately found myself spamming attacks with little care for the consequence, simply aiming to murder my foes as quickly as possible.

It became clear that this wouldn’t work for long. Bravely Default 2 demands patience, encouraging you to switch allies into a default stance while others apply buffs and healing spells that can keep you alive through gauntlet encounters. It’s punishing, and I found myself turning the difficulty down even after grinding away before facing off against certain adversaries. In all honesty, this could use some balancing ahead of release. 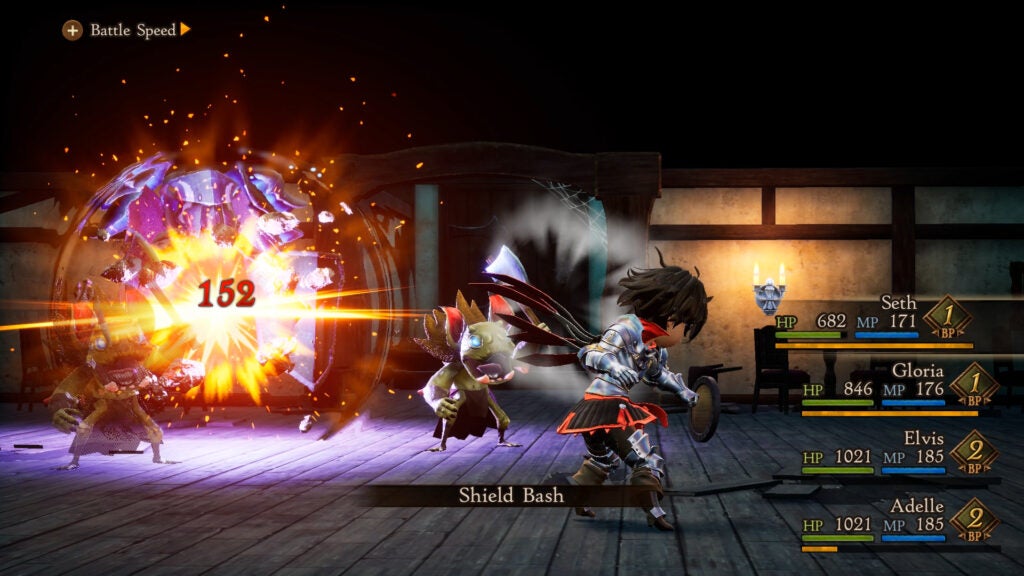 The battle system is further complemented by a fantastic job system. This not only dons your party with an array of fabulous outfits, but also comes with their own path of progression with distinct attributes, skills and passive buffs. I’ve toyed with Freelancer, Black Mage, White Mage, Bard, Vanguard and Monk thus far, and they’re all notably distinct.

You can switch between them whenever you like, although it’s best to assign each party member with a role that they’ll fulfil most of the time. Each character can also have a secondary job, which brings over all of the unlocked skills for use alongside their primary one. It’s a smart idea, meaning each hero essentially becomes a mixture of different occupations.

For example, I had a Black Mage/Freelancer and a Monk/Vanguard, with the latter capable of some truly devastating attacks and tanking skills. It’s a clever twist on Final Fantasy’s iconic job system, applying it to a modern template with stunning results. Battles look and feel fantastic, eliciting a true sense of strategy with some beautiful monster designs. 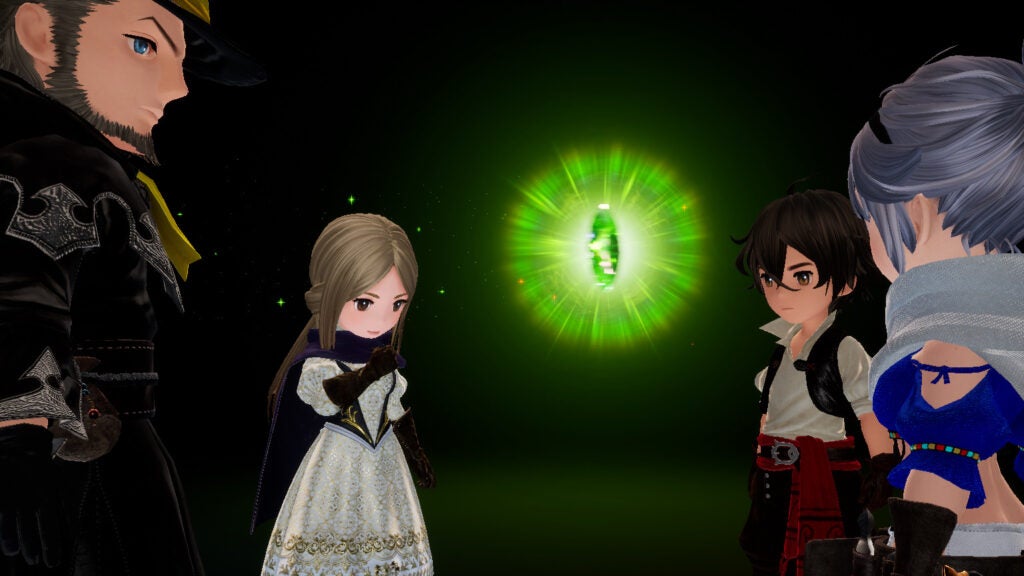 Unfortunately, the characters don’t fare as well. Bravely Default was released for the Nintendo 3DS, and thus had to deal with a number of hardware limitations to depict its ambitious fantasy world. As a result, many of its characters were cutesy, hand-drawn sprites with minimal facial expressions and movements. It was adorable, and still looks wonderful today.

The sequel keeps these designs, but with a much larger degree of visual fidelity. Akihiko Yoshida and Naoki Ikushima’s artwork remains stunning, but is stifled when transferred over to 3D models. Some characters can look ugly, especially minor ones who occupy the exquisitely rendered watercolour overworld. They grew on me overtime, but it remains a stylistic blemish that’s difficult to overlook.

It conveys a startling aura of dissonance between the stellar artwork and how it’s executed on-screen. Fortunately, the main cast are exempt from such annoyances, which is a blessing since you’ll be staring at them for hours when grinding experience points. Grinding is a necessary evil in Bravely Default 2, and becomes less fun on failing to defeat a boss for the third time. 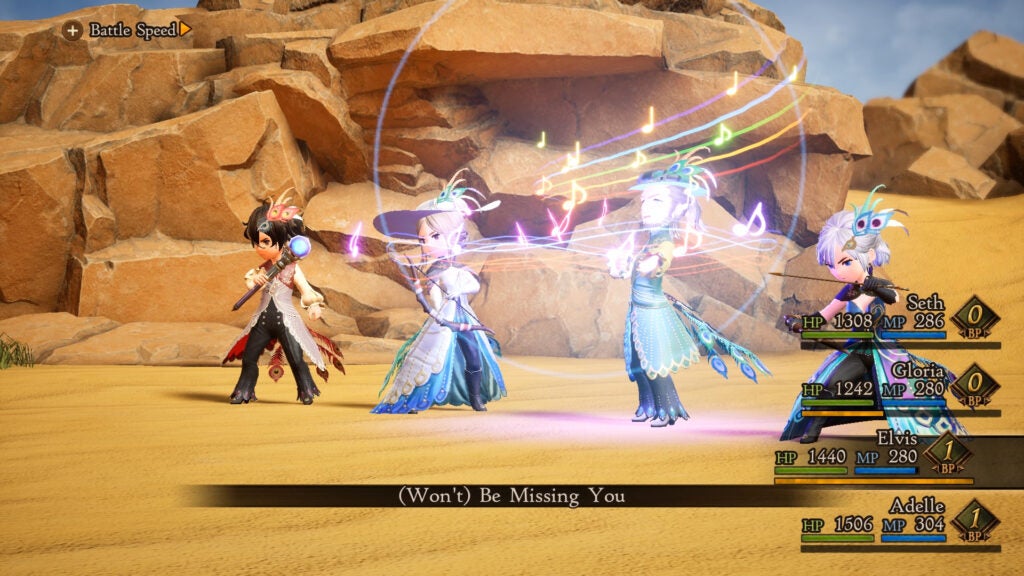 Luckily, side quests make themselves known in the early hours, acting as an ideal way to explore the world and earn some cash to spend on valuable equipment. However, such missions don’t reward experience or job points, which feels like an obtuse omission. Even a minuscule number would make embarking on such tasks all the more rewarding, and many of the fetch quests they involve wouldn’t feel as frustrating.

I’m enjoying my time with Bravely Default 2, even if a few notable issues hold it back from being a true JRPG great. Such qualms don’t detract from a thoroughly engaging core experience, which builds upon the original game in some delightful ways.

Genre purists will arguably look past many of its shortcomings, much like I have, and once you do, the opening chapters tease a journey that will only grow stronger as I press on. Bravely Default 2 could certainly be one of the strongest Switch games of 2021.