What are the Bose QuietComfort 20i earphones?

Bose has produced several in-ear headphones to date, but none have used the active noise cancellation seen in Bose’s best-known over-ear and on-ear headphones, the Bose QC3 and QuietComfort 15.

The Bose QuietComfort 20i bring active noise cancellation to Bose’s in-ear range. And in doing so Bose has created the best in-ear noise cancellation earphones ever made. They are expensive at £269, and can’t remotely match non-ANC earphones at the same price for sound quality. But they are technological marvels regardless.

Bose QuietComfort 20i – Design and Features

From a casual glance, the Bose QuietComfort 20i look quite like the Bose Triport in-ears. They share that pair’s monochrome candy-stripe cable, and the aesthetics of the earbud design are somewhat similar. 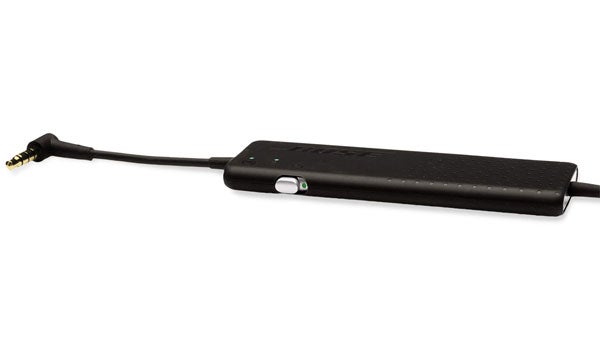 Bose solves this with a power brick that’s quite easy to miss in Bose’s QuietComfort 20i product shots. Down by the headphone jack that plugs into your player or phone is a slim grey rectangle that is home to the headphones’ battery and its on/off switch.

The initial reaction it causes is one of disbelief. It’s much larger than the power units of the other ANC earphones we’ve tested, which tend to attempt to disguise the battery as a remote control housing, with mixed results.

Outside of product promo photos, though, Bose QuietComfort 20i don’t try to hide their power source. It’s meant to slip into your pocket, alongside whatever they are plugged into. And we found it a surprisingly inoffensive presence.

It’s fairly slim, and while you have to take it out along with your iPod/phone/MP3 player when you want to access the player’s controls, it’s a minor inconvenience – partly thanks to its grippy soft touch, textured finish.

The real benefit of the battery bar’s placement is that it doesn’t end up weighing down on the cable. Comfort is, as with most Bose headphones, excellent. The Bose QuietComfort 20i use soft silicone rubber tips that both bung up your ears and grip onto the cartilage that rings around your ear canal – letting the earphones stay securely in place without a particularly invasive fit. 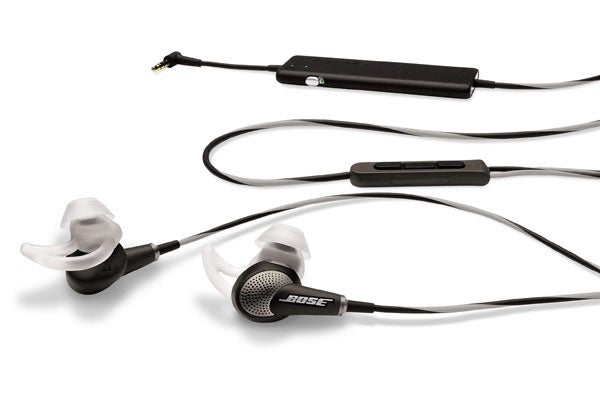 While the battery is right down at the end of the cable, there is a remote hosuing too, which sits up near your chin, where the cable splits. It has a single control button, and another one on the side that lets you hear what’s going on around you when cancellation is switched on.

Using a single button lets the QuietComfort 20i remote work with the majority of phones – Androids and iPhones alike. Three-button remotes only work properly with iPhones, although they also offer volume control, which you don’t get here.

The remote housing also features a pinhole mic, letting you take calls hands-free. It’s a handy little box that doesn’t add any significant weight to the cable – it’s certainly no looker, but it does the job.

The one practicality issue is that we found it all-too easy to forget to turn the active noise cancellation off, which leads to a dead battery the next time you try to use the earphones. However, making you go ‘full manual’ is more sensible than using an ‘auto-off’ function. This is because they’re good enough to merit using on the train, plane or bus without any music playing, just so you can cut out the loud noises.

Battery stamina is rated at 16 hours (around a week’s use for the average commuter), and it’s recharged using the same sort of microUSB port you’ll find in most smartphones. Unlike other Bose active noise cancellation headphones, though, the music doesn’t cut out when the battery drains down – although sound quality does take hit.

Given you have to live with a big old battery brick, charging the thing and the hefty £260 price that comes with a set of Bose noise cancellers, the cancelling performance had better be good.

It is. The Bose QuietComfort 20i are easily the most effective in-ear noise cancelling we’ve ever tested. It doesn’t come as a huge surprise, though, given Bose produces the best on-ear and over-ear headphones (in terms of ANC performance) in the QuietComfort QC15 and QC3. 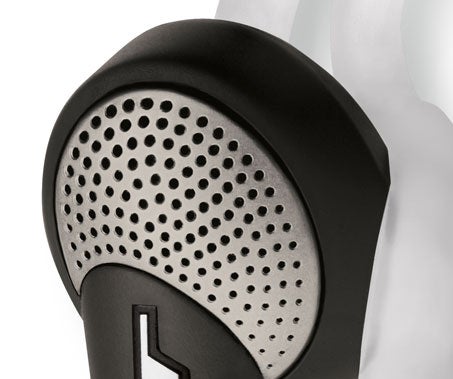 The QuietComfort 20i fundamentally perform much like any other ANC headphones. They use inbuilt microphones that sit in the earbuds themselves, behind an outer grille. These monitor ambient noise and zap it using inverse sound waves of that noise. Science.

Like the QC15, the Bose QuietComfort 20i are extremely adept at removing low-end (in the frequency sense) sounds like motor noise, air conditioner hums and the cacophony of large crowds. Where other in-ear noise cancelling headphones tend to do the same with partial success, here the effect is almost absolute.

It’s remarkable how much they are able to reduce the stress effect of packed trains and noisy-crowded environments. To have a pair of QuietComfort 20is in is to be in your own little oasis of calm. And the potential health effect don’t stop at stopping your blood pressure from skyrocketing on your commute – they also stop you from needing to up the music volume in almost any situation.

It’s clear that a serious amount of clever engineering has gone into the QuietComfort 20i as they are almost as effective as the full-size QuietComfort 15 – and actually offer a more pleasant experience. In the past we noted that Bose’s ANC headphones cause an odd sensation of suction in your ears, caused by the increased sound pressure that’s an unavoidable part of ANC.

There’s no such unpleasantness with the QuietComfort 20i, though – they’re much easier-going. And while the cancellation does produce a slight mid-range hiss, it is very, very slight and is not really audible when playing music at any decent volume.

Active noise cancellation headphones like these are not quite as effective at removing treble sound – IEM isolating headphones are better at this – but we find this isn’t the sound that interferes most with music-listening the most while out and about.

The Bose QuietComfort 20i’s key feature is a complete success, then. But how do they sound? They represent a significant upgrade over Bose’s early earphones – they’re much better than the popular Bose Triports, with superior bass fidelity.

The sound is perfectly matched with the sort of comfort offered by the earphones’ fit and relaxing noise cancellation too. It’s a zero-fatigue, smooth sound that doesn’t have a significant bias in either treble or bass, while offering decent balance, solid bass response and decent bass depth. 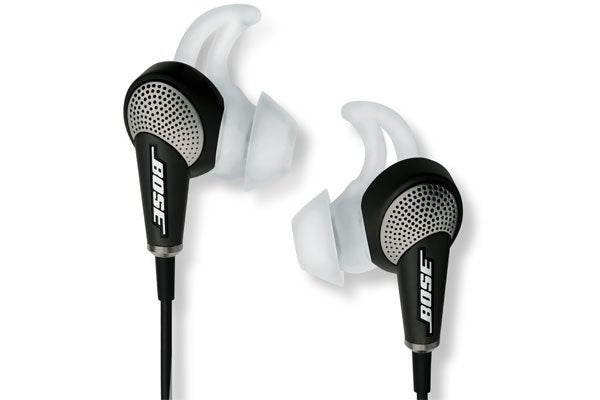 Matched with the noise cancelling effects, we think these are some of the best commuter earphones ever made. They offer better removal of low-end noise than any other earphones, including custom mould IEMs, and we honestly found they reduce the stress of hectic city environments.

As you might have guessed, there is a ‘but’ coming.

The Bose QuietComfort 20i cost £260, putting them next to top-end IEMs like the Shure SE535 and Ultimate Ears Triple.Fi 10 Pro. And lovely as the Bose earphones sound in isolation, they can’t compete with these more serious audiophile sets.

The smooth, slightly soft mid-range of the QuietComfort 20i stops them from offering the texture and across-the-board detail of the top contenders. Although Bose doesn’t talk about the kind of drivers that go into its headphones, we strongly expect these earphones to use dynamic drivers, which are great at sounding big and rich, but struggle to reproduce audio with the accuracy and detail balanced armature drivers are capable of.

The QuietComfort 20i don’t miss out on sound stage – it’s admirably wide – but separation and definition are not what we’d expect from a non-ANC set at the price.

Should I buy the Bose QuietComfort 20i?

The Bose QuietComfort 20i aren’t for people who care only about sound quality and nothing else. These are earphones that have other benefits – benefits that we found we appreciated every day we used them.

However, if you don’t have a daily commute on public transport or are not a frequent flyer, you’re probably better off saving some money and investing in a decent pair of IEM isolating earphones. Either way, though, Bose deserves a standing ovation for the technical achievement that the Bose QuietComfort 20i represent.

Check out our best headphones round-up

They don’t come cheap and you can get higher-fidelity sound at the price, but we just can’t ignore the fantastic noise cancellation the Bose QuietComfort 20i offer. These some of the best commuter headphones money can buy – and certainly the best in-ear noise cancelling headphones we’ve tried. They sound pretty great too, cementing their recommend award.