For the first few hours Bleeding Edge is an absolute blast to play and well worth a look if you have Xbox Game Pass. But there's not enough depth to make it last long-term, at the moment.

Bleeding Edge is a team-based multiplayer experience by Ninja Theory. It aims to entice gamers away from the ever-popular Overwatch by offering melee focused gameplay mixed with heavily stylised, almost Borderlands 3 like visuals.

At first glance the game does exactly what it sets out to do, tasking players to group up into teams of four and fight in a series of PvP battles while aiming to take objectives and accrue points.

In each match, you step into the shoes of an “augmented” fighter. In the worlds’s narrative, these are outlaws that have used cybernetics to enhance their body, giving them superhuman combat abilities and the chops to compete in futuristic underground fighting tournaments.

The premise is as far as Bleeding Edge gets when it comes to plot development and acts as a decent excuse for Ninja Theory to create an, at first glance, varied and compelling set of playable characters.

Open up the roster, and you’ll see everything from common archetypes, like a hip-hop samurai and Norwegian, axe-wielding death metal rocker to a mini-gun wielding Australian lass that looks like the bass player in a 90s riot girl band and S&M-esque magic granny. 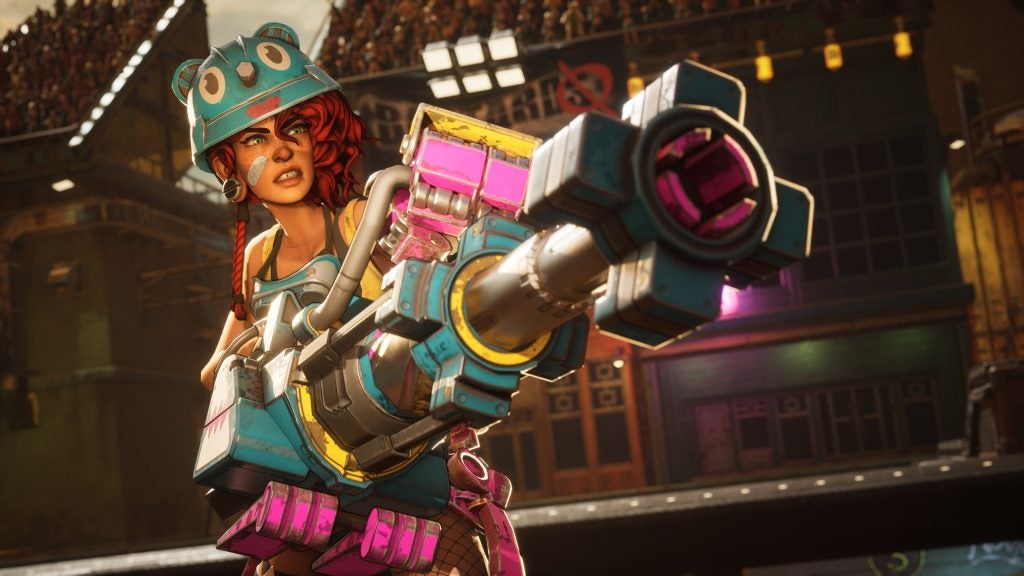 Each character is split into three classes: Assault, Support and Tank. The names are self-descriptive. Assault characters are the main attack-class, Support heroes are the healers and Tanks are the damage sponges.

Combat is pretty simple; every character has a regular attack alongside special moves and a super. The exact combination of special moves depends on the character. My favourite Assault character, Gizmo, has abilities that have an engineering and sabotage focus. Her main attack is a midrange mini gun that does light damage but can be used at range.

It’s best used to support a Tank or more melee-driven Assault character as a result. Backing that up she can lay two auto turrets, drop vortex grenades (which cause medium damage and suck enemies into their centre) and create springboards, which help her navigate the game’s maps quicker.

My favourite Tank character, Makutu, has a much more disruptive focus. A Kiwi wrestler with a cybernetic top half, his abilities focus on rushing enemies and pinning them down. His attacks include a special, run and grab melee and the ability to switch between healing and offensive stances. Whichever one you pick changes his basic attack chain and adds different buffs to his stats. Using his rush attack to swoop in and break up enemy defensive formations is one of the most satisfying things you can do in the game. 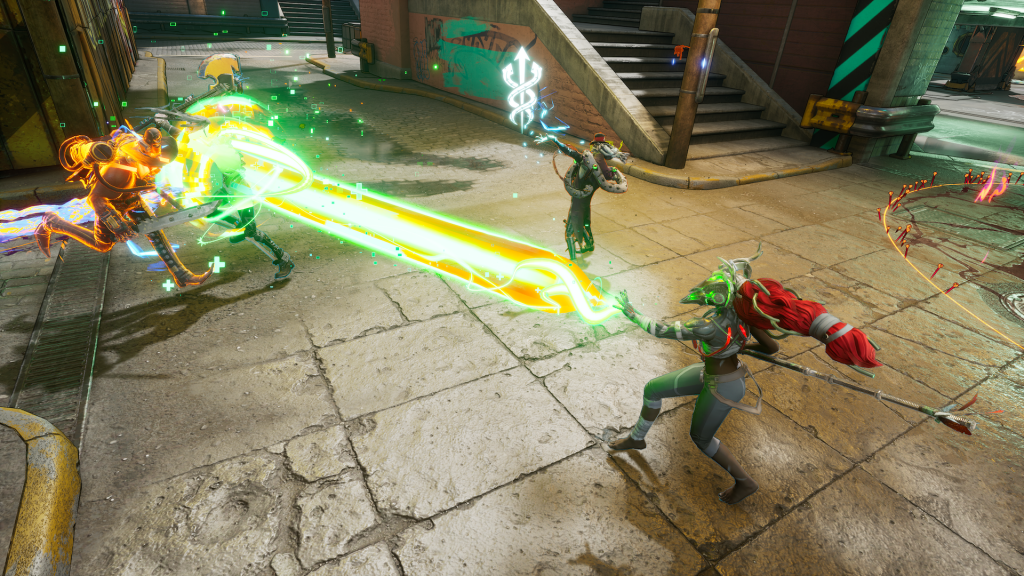 The maps are also at first glance a joy to play, featuring colourful, Sunset Overdrive-like aesthetics and well thought out designs awash with verticality They’re also far from static, featuring all manner of traps that can help or hurt your team. These include moving trains that’ll run you over, electric walls and flame traps on the floor. There’s also arcade power-ups and health regen stations littered across the map which can be useful in a pinch.

To make sure you’re never too far from the action Ninja Theory’s loaded each character with a custom hoverboard that can be used to quickly get them back into the fight after respawning.

Sound good so far? It should. The first few hours, or even day, you spend playing Bleeding Edge will be a blast. As you get used to the game’s dynamics, you’ll feel a sense of wonder and flit between characters trying to find the right one for your playstyle, and the team’s specific needs at a near frenzied pace.

The characters’ combos and abilities feature suitably flashy animations to keep you satisfied. Melee is particularly fun with blows feeling heavy and impactful to keep you entertained.

But after the first couple of days, you’ll see cracks start to appear. The biggest is the lack of variety on offer. For starters, there are only three game modes: Control, Objective Control and  Power Collection. The first two are slightly tweaked king of the hill options that task you claim and hold specific locations on the map. Power Collection is a capture the flag-like mode that tasks you to collect and bank power modules that are littered around the map. 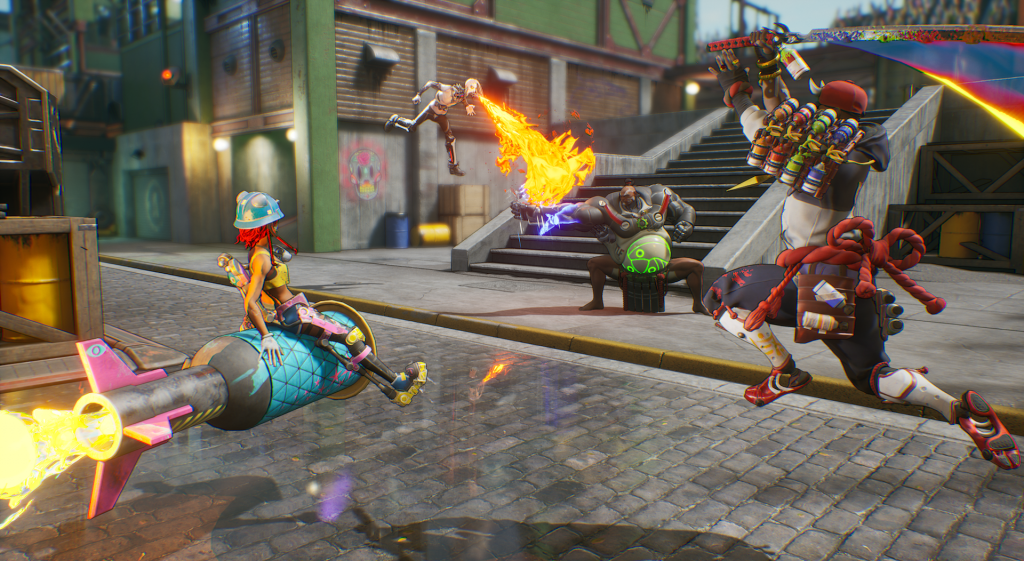 The modes are fun enough, but after a day, I found many matches began to feel slightly repetitive. This is mostly because, though all the characters generally are fun to play, there are specific combinations of heroes that work better than others. The combos that work are also very obvious, so after a day, I found the manic swapping that occurred early on was over, as players opted to stick to the character combinations they knew would work.

This also could make some matches incredibly frustrating as Bleeding Edge’s mechanics can be fairly brutal and very much focus on teams working together. To all the lone wolves out there, be warned, no one character in Bleeding Edge is powerful enough to take on an entire team alone. This meant that if even one player on your team doesn’t work with you, and insists on going it alone or picking their favourite character, even if it makes for an unbalanced team, you are going to lose – badly.

Playing a series with a group of friends, we went from a five-game winning streak to losing 120-to-600 after one of us dropped out and was replaced by a lone wolf random. 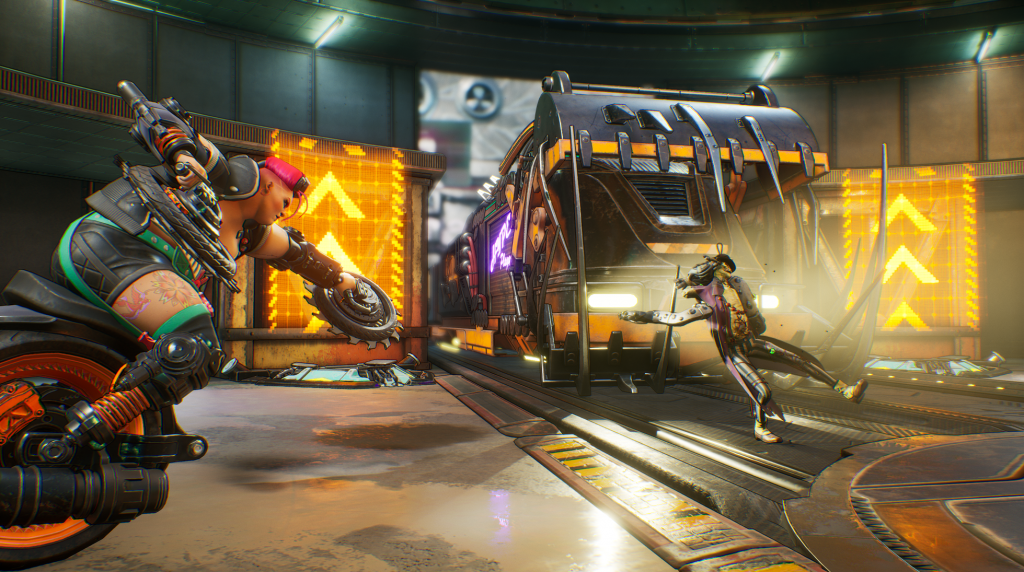 This issue is particularly annoying as the game can create some fairly unbalanced teams in public matchmaking. All too often I’d see a team of entirely new players forced to take on a roster of pros. Every time it was like watching lambs to the slaughter.

Character customisation is pretty limited. The only thing you can do is tweak their emote, skin and board. This isn’t a huge deal, but it means game-to-game there’s not a lot of visual variety and I can’t help but wish Ninja Theory had put a little more effort in and created a customisation system like the one seen in For Honor or Overwatch.

Even with these flaws, there’s no getting around the fact, when it works, Bleeding Edge is a very satisfactory experience. When you get two evenly matched teams with players working together, the game has a wonderfully chaotic, but strategic feel that can lead to some genuinely nail-biting games. It just needs more variety to survive long term.