It might have taken far longer to get here than it was supposed to, but we’ve finally got our hands on the first 4K consumer DLP projector: the BenQ X12000. This is a big deal for fans of DLP’s typical contrast and colour advantages, so although the technology the X12000 uses to deliver its 4K resolution remains entirely baffling, it works. It’s just a shame then that its killer 4K is undermined by issues elsewhere.

As we’ve come to expect from BenQ’s native 4K SXRD projectors, the X12000 is a big old chunk of kit: W471 x H225 x D565mm to be precise. It hangs some distance over the edges of my projection stand, and its 18.5kg weight makes it a two-man lift – unless you’re a more regular gym visitor than I am.

The size and weight bode well for both the quality of the projector’s innards and its ability to disperse the heat generated by its unusual Philips ColorSpark LED lamp system. More on this later. 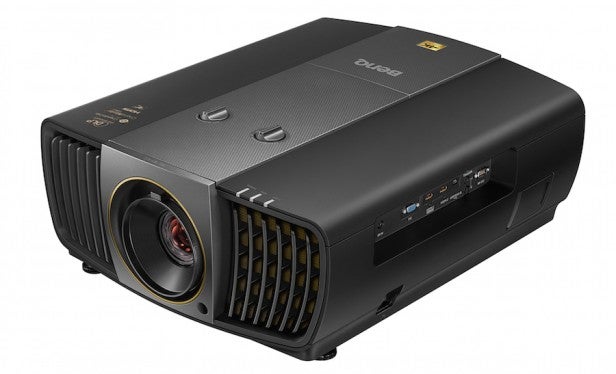 Despite its size and heft, the X12000 is an attractive projector thanks to its curved sides and the wide grey stripe running down its centre and around the promisingly large lens.

This lens is likely responsible for a fair bit of the X12000’s weight, given that it’s just the front-end of a 14-element, six-group array that’s been specially and uncompromisingly designed to handle the demands of 4K’s 8.3 million pixels.

The large vents to either side of the lens may not be to everyone’s tastes, but I personally quite like their industrial feel. Venting the projector’s heat forwards might prove uncomfortable, though, if the projector is sited behind your seating position.

The X12000 ships with a large, backlit remote that gets the job done well enough, even if it doesn’t quite feel as ‘premium’ as the projector it accompanies.

Considering how cutting-edge it is, the X12000 is surprisingly easy to set up. Its large lens features a smooth, well-calibrated zoom ring around it that delivers up to 1.5x optical image enlargement, while you simply twist the frame of the lens itself to adjust focus. 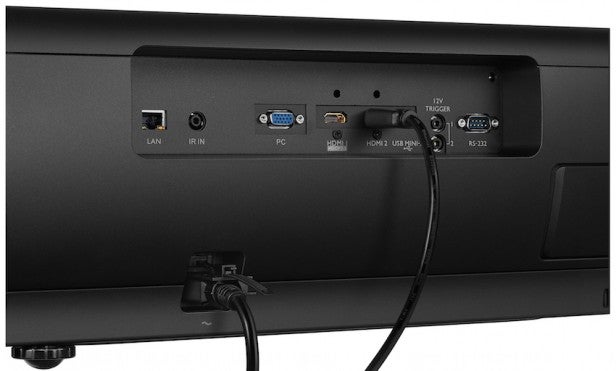 Shifting the image up, down, left or right is no more complicated than turning two knobs on the projector’s upper edge, and BenQ’s menus are clear, no-nonsense and responsive.

The projector sports a number of picture presets to get you started – including Cinema and an intriguing DCI-P3 option – as well as a wide range of gamma presets. Full colour and white balance management is available for finer calibration, which can be tackled by yourself or an Imaging Science Foundation expert.

My main setup tips would be that you use the Cinema preset; turn off all the processing options available in the ‘CinemaMaster’ area of the onscreen menus; and that you set the lamp to its Low power mode if you’re viewing in a dark room.

Note, though, that the X12000’s Normal lamp mode with its 2200 lumens maximum output does adapt better than most projectors to rooms with some ambient light. In fact, the X12000’s pictures are arguably better suited to rooms with a little light – or really huge screens – than typical home-cinema bat caves. 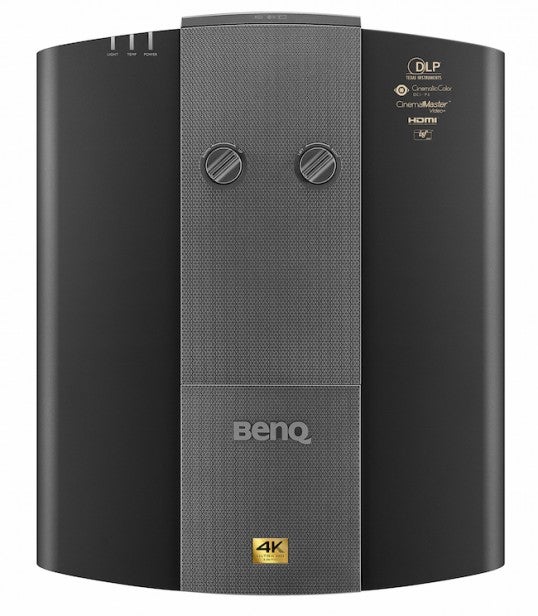 Somehow – and I don’t mind admitting that I still don’t fully understand the technology – the X12000 manages to deliver a 4K picture of 8.3 million pixels, despite its DLP mirror device sporting only 4.15 million mirrors. It achieves this using a Texas Instruments (TI) technology called XPR (eXpanded Pixel Resolution), which deploys an optical actuator to display each physical pixel twice per frame, with each display shifted slightly diagonally.

At this point, DLP’s approach to 4K sounds suspiciously like the pseudo-4K systems used by JVC and Epson in some of their recent high-end projectors. However, TI claims that the speed with which DLP’s mirrors can switch really does result in a genuine 4K experience. And on the evidence of the X12000, TI isn’t wrong: subjective and objective testing shows that you really are seeing 4K.

Given the X12000’s 4K talents, you’re probably expecting me to talk next about its high dynamic range support. But I can’t, because there isn’t any.

With Sony and JVC both providing HDR support on their rival 4K and pseudo-4K projectors, some AV fans may feel dismayed at the lack of HDR on the X12000. In BenQ’s defence, though, HDR is proving mighty difficult for any half-way affordable projector to do effectively, chiefly because they just can’t get bright enough.

As a result, I can understand BenQ simply deciding to focus on getting 4K SDR right rather than struggling to deliver a likely very compromised version of HDR.

Just to confuse matters, though, the X12000 carries a DCI-P3 mode that claims to deliver around 95% of the expanded colour range you normally only see in commercial digital cinemas (or with HDR-capable projectors). This is achieved through a combination of BenQ’s proprietary CinematicColor processing and a Philips ColorSpark LED lamp array.

This lamp drives green light four times as brightly as conventional lamps. Alongside, it uses high-brightness red and blue LEDs from a high lumens density phosphor module to deliver a wider colour gamut and greater brightness. The X12000 claims a promising light output of 2200 lumens.

To be clear, since the projector can handle only SDR video inputs, the DCI-P3 colour effect is created by the projector; it isn’t native playback of DCI-P3 from any of your sources – even Ultra HD Blu-ray drives.

Since the ColorSpark lamp uses LED technology, it should be good for a huge 20,000-hour lifespan (essentially the life of the projector). It also means the projector can be switched on and off without the warm-up/cool down wait usually associated with home-theater projectors.

My personal preference was to not use any of the CinemaMaster’s edge sharpening and noise-reducing features, since all either didn’t appear to do much, or else tended to cause at least as many secondary problems as they solved.

Ironically, the X12000’s processing options weirdly fail to include two things I’d have liked to have used: motion processing for reducing judder and a dynamic contrast adjustment. You don’t even get the usually very effective Smart Eco lamp setting found on other BenQ projectors.

The X12000’s connections include two HDMIs (although only one is equipped with 4K-friendly HDCP 2.2 support), two 12V trigger outputs, a D-SUB PC port, plus RS232 and LAN ports for integrating the projector into a home control network.