Any doubts over whether the X12000 can really deliver a 4K picture evaporate on setting eyes on its sumptuously detailed and crisp reproduction of Ultra HD Blu-rays such as Lucy and The Revenant. Even Sony’s excellent native 4K projectors don’t do such a pristine job of handling Ultra HD Blu-rays – so it goes without saying that there’s just no comparison between the 4K performance of the X12000 and rival ‘pseudo’ 4K projectors.

As well as looking spectacular, the X12000’s gorgeous resolution means that you can push its images much larger than normal, without them starting to look rough or soft.

In addition, the image’s resolution and clarity is enhanced by the X12000’s impressive freedom from the fizzing noise that usually accompanies single-chip DLP projection. Even dark scenes look clean and smooth, with the only noise on show generally being natural grain. 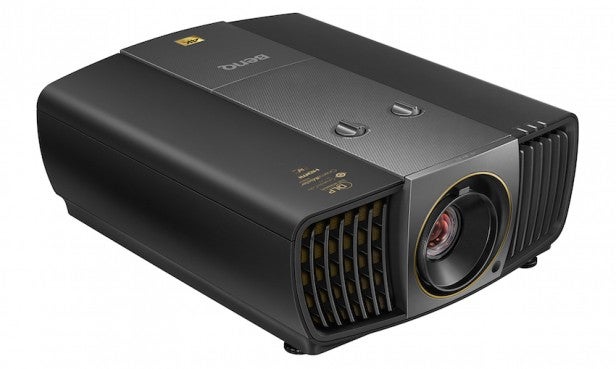 Also impressive is the X12000’s outstanding colour handling. In Cinema mode colours look especially exquisite, combining consistently natural, balanced tones with seldom-seen levels of tonal subtlety. They deliver flawless blends and stunningly credible skin tones that are free of blocking or ‘patching’ artefacts. I’m not sure if the extreme resolution is helping to unlock the colour finesse or vice versa, but the two talents together are a match made in heaven.

Switching to the DCI-P3 setting actually sees the colour performance become better for some sequences; there’s more richness and a genuine sense of extra colour range. However, the results are inconsistent, leaving some sequences looking too yellow, and some skin tones a little peaky. In the end, this scene-by-scene inconsistency was enough to persuade me to stick with the straight Cinema mode.

The X12000 makes its premium nature felt with its brightness, too. In Normal lamp mode pictures look far more dynamic and bold than even the 2200 lumens of claimed light output would have led me to expect. Highlights include direct sunlight searing off your screen with levels of intensity that look almost HDR-like at times.

The brightness – in conjunction, I suspect, with the X12000’s advanced gamma controls – also enables it to reproduce exceptional amounts of shadow detail in dark scenes. Once again, this helps to keep the sense of 4K clarity consistent; it isn’t only something you appreciate during bright moments.

The X12000’s brightness helps it deliver a better picture in rooms containing ambient light than most home cinema projectors, and joins with the exceptional resolution in making it more able than rivals to drive a really big screen.

In fact, the brightness is so effective that I couldn’t help but think the X12000 might have been better placed than, say, JVC’s darker D-ILA projectors, to delivering a convincing projected HDR experience.

While the X12000 has definitely convinced me that 4K DLP projection is something home cinema fans should be excited about, the sheen is taken off a bit by a few non-4K problems.

First, black level performance isn’t that great. Yes, it’s good at reproducing details in dark areas, but the overall tone of those areas is rather grey and ‘milky’ – more so than on some of BenQ’s far cheaper Full HD projectors. There are no options available in the projector’s controls that solve this issue, making the lack of any adjustable dynamic contrast/iris controls feel puzzling. I can only assume that BenQ couldn’t get them to work properly with some aspect of the X12000’s light engine.

Another big issue with the X12000 is the rainbow effect. This single-chip DLP issue sees stripes of pure red, green and blue flitting over stand-out bright parts of the picture, especially if you move your eyes around the image. Even though I don’t consider myself particularly susceptible to seeing rainbowing, I found it a fairly routine distraction on the X12000. Especially since the striping appears even over bright scenes, rather than being limited to bright elements of otherwise dark scenes, as is usually the case.

Using the projector’s low lamp output reduces the impact of rainbowing to some extent, but it doesn’t fully solve the problem. 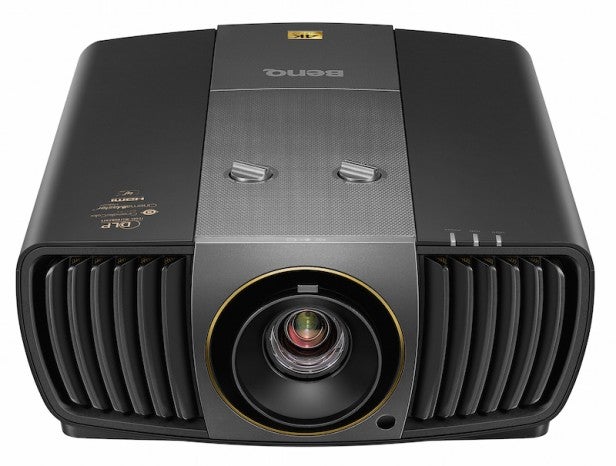 The X12000 also struggles a little with motion. There’s enough judder with 24p sources to cause camera pans to look quite distracting and low on detail, especially in the context of the 4K glories so evident with relatively static footage.

Meanwhile, while watching 50/60Hz 4K content such as the Billy Lynn’s Long Half-Time Walk Ultra HD Blu-ray, the picture suffers with fairly stark image striping and fizzing over pronounced details such as strong facial features or the edges of sharply contrasting objects. This noise crops up both during camera pans and over fast-moving objects within the frame.

Making sure the resolution booster circuit in the CinemaMaster processing system is turned off improves judder somewhat, but the ‘CTI’ and ‘LTI’ features had no obvious impact. As mentioned earlier, while I’m not usually a fan of motion processing on projectors, this is one instance when I found myself wishing BenQ had provided something for me to at least experiment.

While the X12000 delivers a spectacularly detailed picture with 4K footage, it isn’t a particularly brilliant upscaler of HD sources. On the upside, it suppresses source noise quite effectively while adding four times as many pixels to the image. However, the resulting pictures look much softer than both the X12000’s native 4K images and upscaled HD images on most other good 4K displays. The softness is such, in fact, that some large-scale shots almost look out of focus in the mid- and far distance. 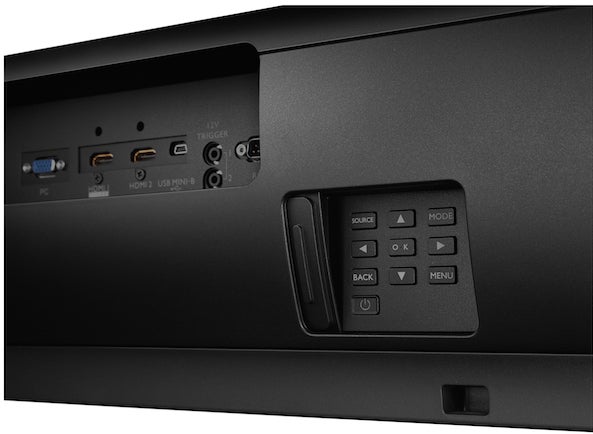 One last issue with the X12000 is that at around 60ms with all the video processing turned off, its input lag (the time it takes to render image data) is a little high for gaming. It’s a pity, too, that BenQ hasn’t included a Game picture preset.

If you want to see the cleanest, most detailed 4K pictures yet delivered by a projector then the X12000 is the projector for you. Its brightness also makes it an excellent choice for cinema rooms you can’t completely black-out, or for keeping images bright on big screens.

However, it’s a pity that the X12000 doesn’t support Ultra HD Blu-ray’s HDR capabilities. And it’s certainly a shame that the joy of seeing 4K used so effectively is undermined by a mixture of rainbow effect, motion and black level concerns that you don’t get with Sony’s 4K projectors.

In fact, given the nature of some of its issues, I can’t help but wonder is BenQ’s cheaper W11000 4K projector, with its more conventional lamp system, might actually turn out to be a stronger performer overall. I’ll try to get hold of a model in the coming weeks.

As a first demonstration of the 4K potential of DLP projection technology, the X12000 is a resounding success. However, in other areas there are reminders that the X12000 is simply a starting point for 4K DLP – and, as such, may have taken its spirit of experimentation a step too far.