The TW7300 is an LCD projector designed from the ground up for home cinema use. It’s the long-awaited replacement for the popular EH-TW7200, and introduces support for both 4K and HDR (high dynamic range) playback.

The 4K support isn’t truly native; it’s a pseudo-4K implementation similar to that used by JVC’s current D-ILA projectors. There are also some significant issues with its HDR handling. Nonetheless, the TW7300 has enough going for it to make its £2,200 price look like seriously good value.

If size truly matters, then the TW7300 must be the most important home cinema projector in the world. Its huge chassis dwarfs higher-end rivals such as JVC’s D-ILA projectors and even the recently tested Sony VW550ES. It’s so wide that its feet hung off either side of both my test room projector stand and the coffee table in my living room.

Couple this largesse with the fact that the TW7300 is finished in a matte white and it’s not exactly the easiest thing to blend in with a blacked-out cinema room. Just as well its pictures are (with most sources) bright enough to drag your eye away from its bulky form.

The TW7300’s hefty 11kg weight and robust finish both raise hopes of quality innards, while its size also raises hopes that it might do a better job than most of suppressing noise from its cooling fans.

Despite its enormity, the TW7300 isn’t ugly. Its mix of curved edges and stylish grillework adds up to a design that looks much more living room than laboratory.

The TW7300 ships with an impressive remote control. It’s big and weighty, comfortable to hold, backlit and enjoys a reasonably ergonomic layout.

Once you’ve manhandled the TW7300’s considerable bulk into the right place on your ceiling, coffee table or stand, the ‘physical’ part of setting up this projector is a breeze. It features 2.1x optical zoom and lots of vertical and horizontal image shifting, all delivered – along with focus – by a smooth and effective motorised adjustment system.

Things get more complicated when it comes to getting the best picture quality from the TW7300 – especially if you want to watch HDR.

The complications begin with the fact that getting the best HDR colour performance requires you to choose the Cinema picture preset. It’s only in this mode that the TW7300 introduces the physical colour filter that increases the projector’s colour range to accommodate the HDR-friendly DCI-P3 colour spectrum.

Once you’ve taken this key first step, you’ll have to embroil yourself in a tortuous attempt to hit upon the best combination of contrast, dynamic range and lamp output settings.

The Dynamic Range setting has no less than four different HDR mode options, as well as an SDR option should you eventually decide that HDR on the TW7300 just isn’t for you. I spent an age shifting between the various HDR presets and then tweaking the lamp output and contrast settings, but never achieved an entirely satisfying HDR picture.

In the end I found the ‘least worst’ compromise came when using HDR Mode 2 Dynamic Range setting, the Medium lamp output, and with contrast pushed to 90 or higher.

For SDR viewing the setup is far more straightforward, as the projector’s settings are much more forgiving. My main tips would be to make sure SDR is selected in the Dynamic Contrast menu, to set the lamp to its Low output, to set the dynamic iris to its high-speed mode, to set the 4K Enhancement on, and to turn off both the standard and MPEG noise-reduction systems.

Note that if you set the lamp to Medium or High and leave the dynamic iris set to high speed with SDR sources, you’ll suffer with greater variation in running noise and distracting brightness shifts in the image.

The TW7300 offers a startlingly long feature list for its money, including playback of HDR and 4K sources.

The HDR support includes 10-bit processing and a wide-colour-gamut filter called in by activating the projector’s Cinema picture preset. The TW7300’s claimed brightness of 2,300 lumens and claimed dynamic contrast ratio of 160,000:1 are both decently high for a sub-£3,000 projector, and will hopefully help it deliver at least a sense of HDR’s enhanced contrast. 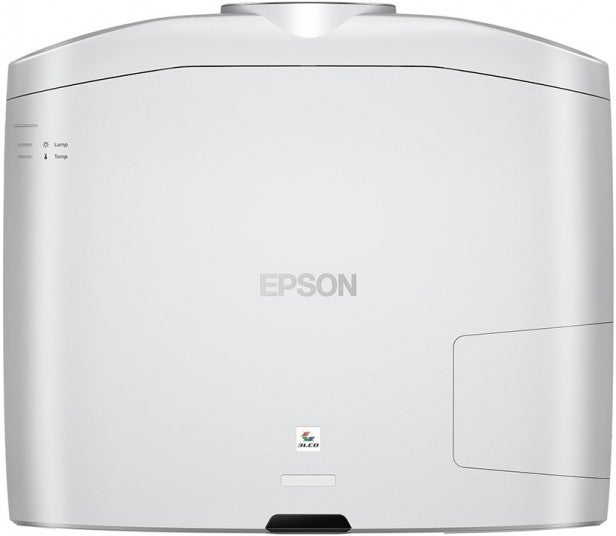 The TW7300’s 4K support is more complicated, since the projector doesn’t boast native Ultra HD LCD chips. Instead it takes a similar approach to JVC’s ‘e-shift’ pseudo-4K projectors, placing two 1080p chips sequentially, offset from each other by half a pixel to create twice as many pixels. Incoming 4K images still have to be converted to 1080p from 4K before the TW7300 can set about doubling the pixel count again.

Tucked away in the TW7300’s menus are a number of processing features. These include a three-level Frame Interpolation system, separate Fine and Fast image-processing settings – the latter being your best bet for video gaming – and separate MPEG and standard noise-reduction systems.

You can also adjust the sharpness and resolution impact of the 4K Enhanced processing.

There’s support for 3D playback if you cough up extra for Epson’s active-shutter 3D glasses, while its motorised lens system means the projector can offer a helpful lens-memory function for quickly adjusting the image to cater for different aspect ratios.

Other helpful features include an optional automatic iris that adjusts the light output based on the images being shown, and three levels of lamp output: Low, Normal and High.

The TW7300’s connections include two HDMIs offering HDCP 2.2 support, a 12V trigger output, a VGA PC input, plus network and RS-232C support for integration into home control systems. There is no support for the optional wireless HD video-transmission system available for Epson’s step-up TW8300 and TW9300 models.