The X7000 is the first model from JVC’s much-anticipated new range of “D-ILA” projectors.

In the two years it’s taken the range to come to market – instead of the usual annual refresh – it will be interesting to see whether JVC’s engineers have improved on the company’s consistently outstanding projectors to achieve a whole new level of excellence. Especially since the X7000 adds high dynamic range (HDR) support to the usual lineup of ultra high contrast and “e-shift” technology.

Aside from adding extra cooling fan vents to accommodate ever-brighter lamps, the design of the JVC DLA projector has remained consistent over the years. So it comes as no surprise to find the X7000 sporting the usual glossy black, elongated and slightly elliptical body wrapped around a large, centrally mounted lens.

It’s isn’t the most glamorous design in the projector world, but there’s a pleasing seriousness about it, and its sheer familiarity breeds a feeling of comfort given how excellent so many of the X7000’s predecessors have been.

Connectivity is fairly impressive. Although JVC includes the usual two HDMIs, both are built to the up-to-the-minute HDMI 2.0a specification. As a result they’re capable of handling 18Gbps of video data; both feature compatibility with the HDCP 2.2 4K/UHD anti-piracy protocol; and both support 10-bit, HDR and 4K/60fps images. In other words, there’s nothing the AV world can currently throw at the X7000 that it shouldn’t be able to handle.

HDR support is especially welcome given that the X7000 has likely been in development for some time – certainly before a point at which HDR specifications were finally locked down.

However, note that the model I reviewed was still missing the ability to automatically adjust its settings in response to receiving an HDR picture; this will be added via a firmware update. JVC did provide the preferred picture settings the projector will default to for HDR, so that I could try them out with my brand-new collection of Ultra HD Blu-rays.

At this point it’s important to stress that while the X7000 is capable of taking in native 4K/UHD source images, it isn’t actually a native 4K projector. When it receives a 4K image, it converts it to Full HD before pushing the results through JVC’s e-shift 4K system. This fires images through two 1080p chipsets, offset diagonally from one another by half a pixel, to deliver images that effectively contain a pixel density equivalent to that of a native 4K projector. 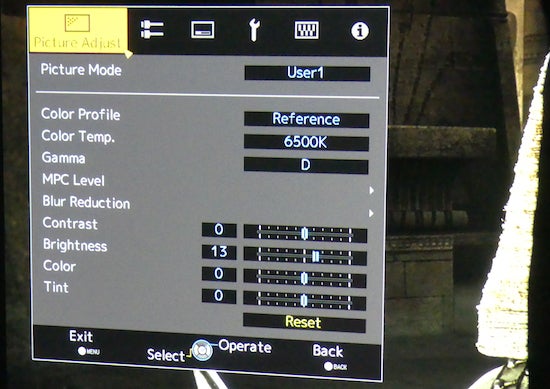 This isn’t the same as rendering a 4K source pixel-for-pixel onto a native 4K chipset, the way that Sony’s 4K projectors do. And I can’t help but feel a little disappointed that JVC hasn’t yet managed to deliver a native 4K D-ILA projector, with even its new flagship X9000 model sticking with e-shift instead.

That said, experience has shown JVC’s e-shift technology is capable of delivering surprisingly detailed images that surpass vanilla HD in their density and texturing. So assuming the system works as well on the X7000 as it has on previous e-shift projector generations, it will do more than enough to make up for the lack of native 4K support. This is especially true when you take into account the X7000’s £5,699 price, which makes it more than £3,000 cheaper than the native 4K, HDR-capable Sony VW520ES projector.

The X7000 image specifications list it as offering 1,800 ANSI lumens of brightness – up nearly 40% on this model’s predecessor, the JVC X700. This should prove handy in helping the X7000 achieve its HDR ambitions.

The X7000’s claimed native contrast ratio of 120,000:1 is also pretty impressive. The “native” bit here is very important, since it means the X7000 can achieve such a prodigiously high contrast figure without resorting to a dynamic iris system. This should mean that the X7000’s images look markedly more stable and consistent.

For those that want to JVC’s DLA projectors do offer the option of using a dynamic iris, however. And if you opt for the one on the X7000, JVC claims the contrast leaps to a brain-melting 1,200,000:1.

I can’t say I noticed quite such an extreme difference in contrast when toggling the dynamic iris on and off. However, it gives images a slight contrast boost, without exhibiting the common  mechanical noise or luminance instability issues associated with dynamic iris tech. So although purists will likely leave it turned off, it’s something I’d suggest most users at least experiment with rather than dismissing it out of hand.

While 3D appears to be dying off in the TV world, sensibly it’s going strong with projectors. So it’s no surprise to find it supported by the X7000, even though there aren’t any active 3D glasses included.

Other key features include a lens memory, so you can save different zoom and focus settings to suit different film aspect ratios, and certification from independent quality-assurance organisation THX for both 2D and 3D picture quality – along with a THX-designed picture preset.

When it comes to physically getting the right-sized image positioned accurately on your screen, the X7000 is pretty much a dream come true. It provides plenty of optical zoom, vertical image shift and horizontal image shift, and since the lens controls are motorised, it’s possible to control all the optical adjustments – including the focus – via the remote control. 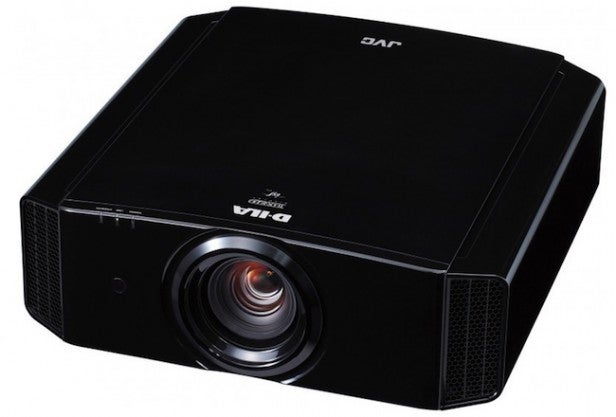 When you enter lens adjustment mode, the projector provides a simple but effective test pattern to help you get everything set up correctly.

As is usual with JVC’s mid-range projectors, the X7000 is well stocked with picture-calibration tools. There’s a wide selection of mostly well-considered themed presets if you don’t want to get too involved in a more detailed setup.

However, for those who want to perform a detailed calibration to optimise the performance for a particular room setup, the X7000 includes the colour, gamma and white balance management required. Not surprisingly, the X7000 is endorsed by the Imaging Science Foundation (ISF) as a projector that one of its specialist engineers could calibrate for you.

More controversially, the X7000 also features a few video-processing options aimed at reducing noise and motion blur. These are okay if used at the lower end of their power settings, but for most content you’ll be better turning them off.

Between its different presets – especially the Cinema 1, Cinema 2 and THX options – and the fact that its pictures have plenty going for them out of the box, setup is simple. At least with standard dynamic range content.

For HDR, and if your X7000 hasn’t yet received the HDR firmware update, JVC advises setting the Colour Profile to “Reference”; the Gamma to D; and, in the Gamma fine-tuning menus, adjusting the White settings to 12 for Picture Tone, 5 for Dark Level, and 4 for Bright Level. Also – and this is hugely important – you need to enter the Advanced picture menu and make sure the lamp is set to High output.

Personally, I also felt the need to boost the brightness setting from its neutral zero level to around 10, even though this results in a marginal reduction in the projector’s black level performance. I’ll discuss my reasons for this in the HDR part of the Picture Quality section.