The Audeze Penrose is one of the best-sounding wireless gaming headsets we’ve tested, offering wonderfully detailed and immersive audio. But its high upfront cost makes it overkill for the majority

The Penrose is the latest ‘ultra’ premium gaming headset from Audeze, a company traditionally associated with delivering high-end devices for audiophiles.

Aiming to offer gamers the ultimate audio experience, the headset comes with a number of custom technologies not traditionally seen on competing headsets from the likes of Razer, Sennheiser and SteelSeries.

The biggest of these is the inclusion of planar magnetic drivers, which aim to offer noticeably more detailed audio – although it does make the Penrose significantly heavier than traditional headsets. Following a solid month of using the Penrose as my primary headset, I can confirm it’s the best-sounding wireless headset I’ve tested and a solid choice for any serious gamer with cash to burn.

However, its hefty price means it will be overkill for more casual players, who would be better off investing in a cheaper set such as the Sennheiser GSP 370, which offers longer battery life and solid, albeit not industry-leading, audio quality.

The Audeze Penrose gaming headset is available for £299/$299 from the official website. There are two models to choose from: the standard Penrose designed for PlayStation, and the Penrose X with Xbox-focused styling.

The official website currently only has units available via backorder, but the Audeze Penrose is available at the same price through other retailers such as Amazon UK.

The Audeze Penrose sports a very similar design to the older Mobius, to the point I had to do a double-take on lifting the headset out of the box, believing the firm had sent in the wrong model.

This means they offer a wonderfully premium feel, featuring faux-leather cups, padding on the headset and a textured plastic main base. Build quality is solid; this headset feels significantly more expensive than the majority of headsets I’ve tested, which tend to come with a fairly cheap plastic chassis.

Like the Mobius, the Penrose also has an attachable mic. It’s connected to the left can, which also houses the USB-C charge port, mic/audio volume dials, mic mute switch and power button. 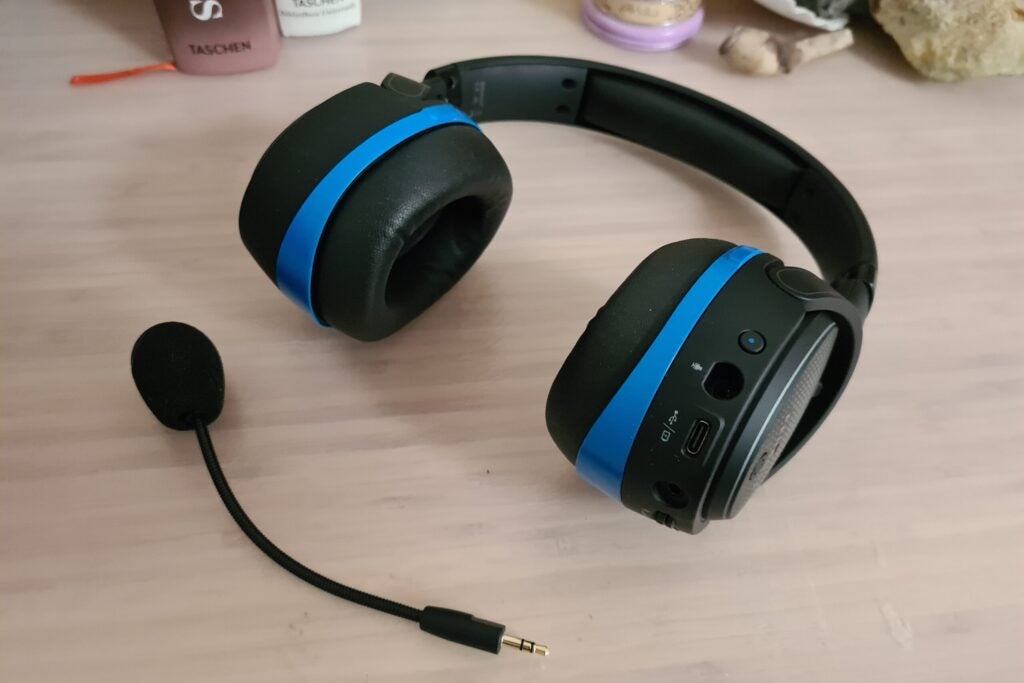 The only slight design downside is that the headset is noticeably heavier than most rival sets thanks to the inclusion of the planar magnetic drivers. As a result, the headset felt slightly odd when I first put it on. Following a couple of hours, however, I was accustomed to the added heft, finding the Penrose comfortable enough, even for extended play sessions

Setup proved wonderfully easy on PC, thanks to the inclusion of a 2.4GHz wireless dongle alongside Bluetooth 5.0. Simply slot the dongle into any empty USB slot, turn the headset on and select it in the audio option. This is a key factor that differentiates the Penrose headset from the Mobius; the latter relies on less stable Bluetooth connectivity when used wirelessly. 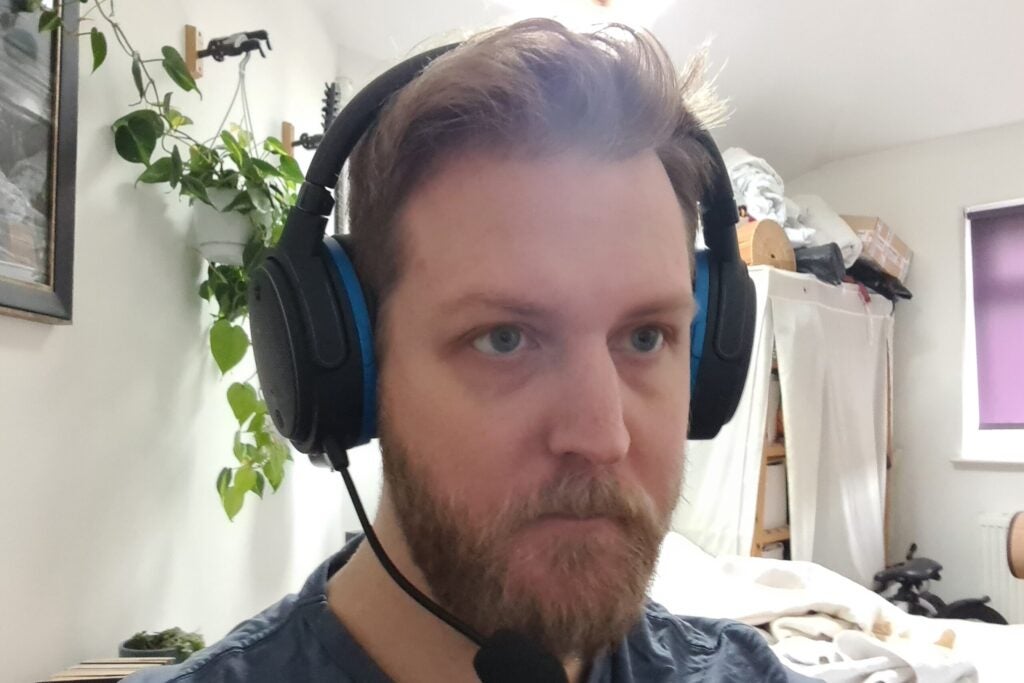 This is a big deal, one that allows the Penrose to offer a far more stable wireless connection than its predecessor, which was plagued by connectivity issues in our tests. Playing games with the Penrose, it never suffered any latency or connection dropouts.

Battery life also proved reasonably solid, albeit not industry-leading. During testing, I averaged around a week of use before the Penrose required charging. This entailed using it wirelessly for an hour each day during the work week, and eight hours of Destiny 2 Raid over the weekend. This puts it just shy of the 15 hours quoted on Audeze website.

The Penrose delivered audio quality on a par with the very best headsets I’ve tested. Like the Mobius, the Penrose house custom planar magnetic drivers. For non-techies, these are atypical components that work differently to the dynamic drivers seen in most regular headsets and headphones.

They aim to offer more detailed audio and reduce noise by suspending the headphones’ diaphragm material between permanent magnetic fields. By comparison, most dynamic drivers produce sound by placing the driver over a coil.

Engineering aside, the Penrose produce one of the best audio experiences I’ve ever had from a gaming headset. Powering up online shooters such as Destiny 2, every shot held a distinct space in the audio field. Not only did this make it easy to discern the location of the gunfire, but I was also able to determine the type of weapon used. This is a key area in which cheaper headsets struggle: most offer a terrible stereo image and flabby low-ends that drown out mids and highs during intense online matches. 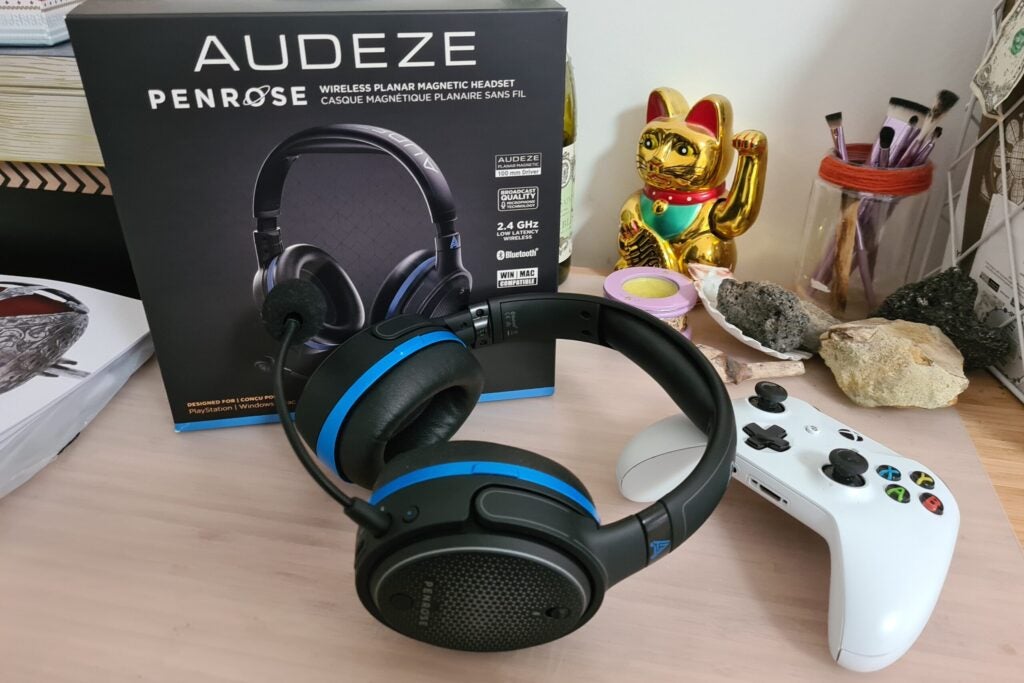 Jumping into Gears 5, the headset’s audio presented wonderful dynamism and power. The rumble of my character’s chainsaw bayonet had a wonderfully powerful, but controlled nature, and I was able to hear my teammates voice chat over the battlefield chaos with crystal-clear clarity. This, plus the Penrose reliable mic made it great to use for multiplayer games.

If you’re not a fan of the out-of-the-box audio profile, the Audeze HQ app makes it quick and easy to customise the headset’s sound – although, during testing, I felt no real need to do so given how good the out-of-the-box settings are.

Note that the Penrose headset doesn’t offer any form of active noise cancellation (ANC). However, playing intense horror games such as Dead by Daylight and The Medium, I found that the headphones provided a tight-enough seal to lock out any background noise. In fact, the only time background noise crept in to the point it hindered the game’s immersion was when my other half was playing very loud music in the adjacent room. 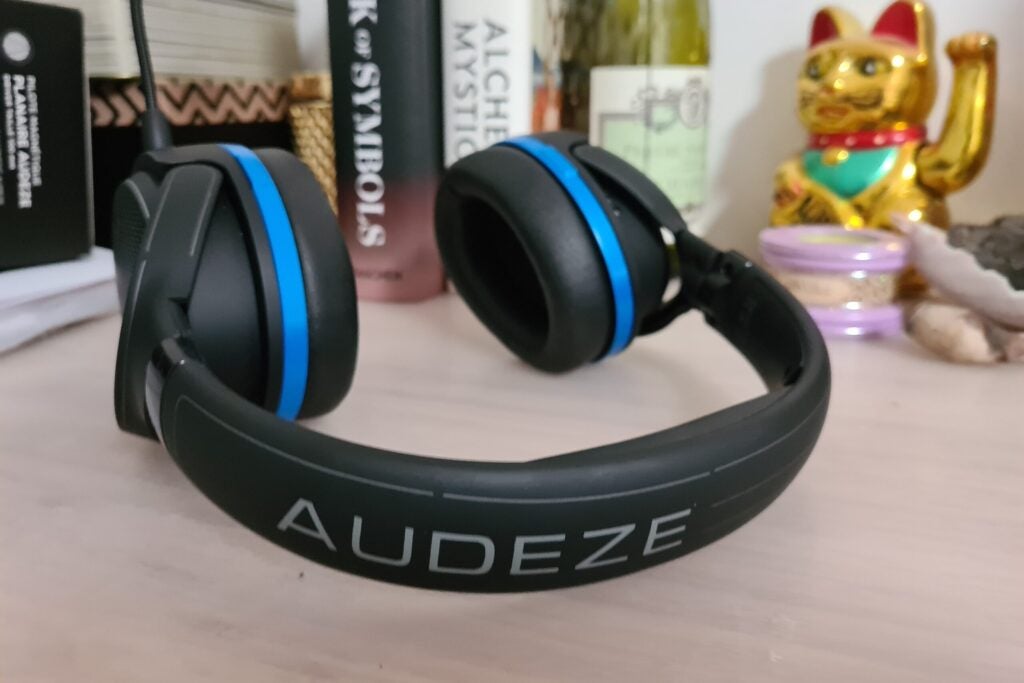 A slight compromise is that the Penrose don’t feature Audeze’s ‘spatial audio’ technology. This is a custom tech that enables the headset to detect and adjust audio based on your head’s movements and position.

For example, playing Resident Evil 7 in VR with the Mobius, the headset would adjust the direction of incoming enemy footsteps based on where I was looking, giving the game a more realistic, immersive feel. Most traditional headsets offer directional audio based on the assumption you’re always looking straight-on. This is fine if you’re looking at a monitor, but not ideal if you’re playing a game in virtual reality, where head movements are a big thing.

That said, the Penrose still offer great virtual surround sound by regular headset standards. Playing Dead by Daylight, I could still hear whether the serial killer was approaching from the left or right, and the rough distance of failed generator explosions during the game. All-in-all, the Penrose is the best-sounding headset I’ve reviewed in quite some time.