The Asus ZenBook Flip S (UX371) is slick, sturdy and stylish – plus it comes with a fantastic display and keyboard. It’s a great mainstream hybrid, but rivals offer superior performance and better battery life.

The Asus ZenBook Flip S (UX371) is the latest addition to Asus’ luxury range of laptops. As the name suggests, this is a hybrid, which means it switches between laptop, tent and tablet positions.

Happily, this laptop has been furnished with an Intel Tiger Lake processor, which isn’t the only eye-catching feature; also noteworthy are its 4K OLED touchscreen and Thunderbolt 4.

There’s no denying the UX371’s sense of style. The body is made from dark, matte aluminium, and its edges are finished in a copper shade. The copper extends to the hinge and the off-centre Asus logo on the lid, too.

I found the build quality impressive, too. The base barely moves, and the display exhibits similar strength alongside robust, smooth hinge movement. It’s a reassuring machine, and it’s hardly a heavyweight – it weighs 1.2kg and is only 14mm thick. 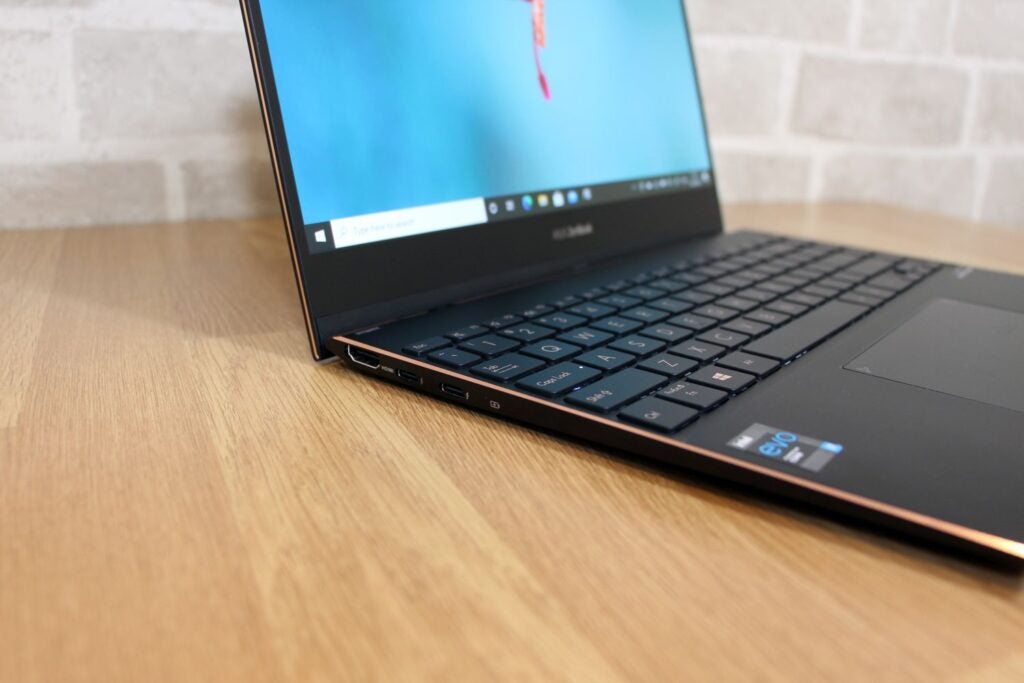 The left-hand edge has two USB-C ports that support future-proofed Thunderbolt 4. The right is home to a full-size USB 3.2 Gen 1 port, and an HDMI port. There’s a 720p webcam that supports Windows Hello, and in the box you’ll find audio and Ethernet adapters and a stylus.

I’m disappointed there’s no headphone jack, card reader or fingerprint reader though, and the webcam has no privacy shutter – only a keyboard shortcut to disable the camera.

The Asus faces plenty of competition from hybrids and conventional laptops. The Apple MacBook Air M1 and Dell XPS 13 are just two, with the latter sold as either a laptop or a convertible, while Microsoft’s Surface Book 3 is another rival. The MacBook Air is heavier and thicker than the Asus; the Dell offers similar dimensions; and the Surface is heavier and uses a detachable design.

The only machine to beat the Asus on the connectivity front is the Surface, which comes with two full-size USB ports, a headphone jack and an SD card reader.

The ZenBook’s sunken keyboard serves up a decent 1.4mm of travel. The buttons are wide, and finished in the copper shade found elsewhere on the device, with a bright white backlight. The layout is reasonable: there’s a row of extra function buttons, the cursor keys are separated and the power button isn’t on the keyboard. 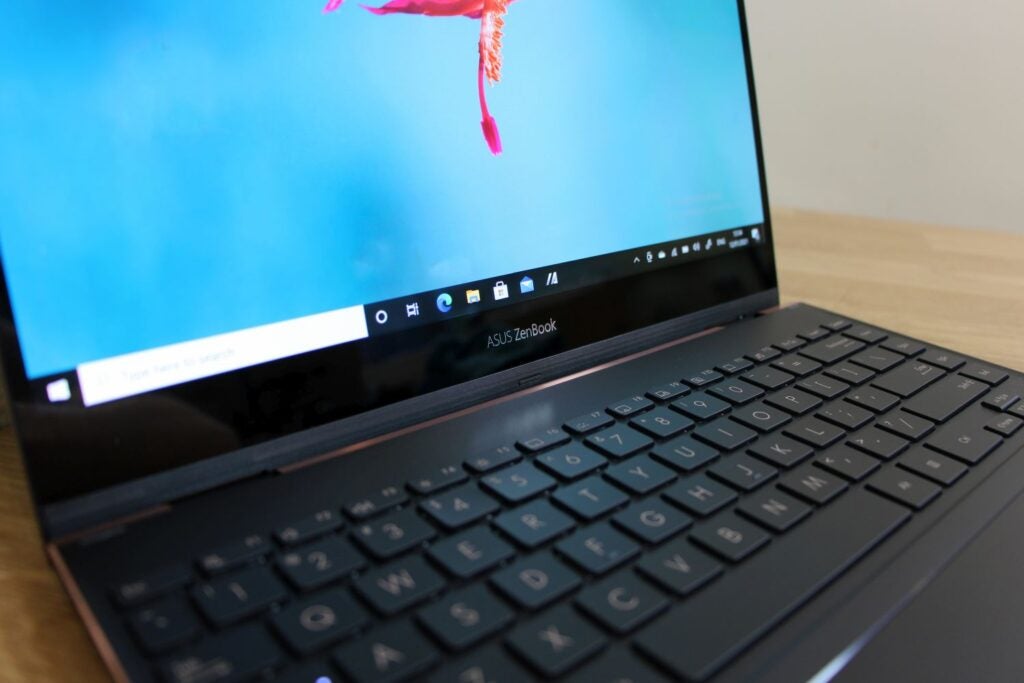 The keys strike a great balance between feeling crisp and comfortable; they’re usable for hours without causing finger fatigue. They’re quiet, and accompanied by a trackpad that’s wide, accurate and with fast buttons. The trackpad has a smart extra feature, too – a touch-sensitive number pad to make up for the lack of a physical one.

This keyboard is just as good as anything you’ll find on an Apple or Dell device, with the absence of a fingerprint reader the only area where rivals outdo the Asus.

The ZenBook has a 13.3-inch OLED touchscreen with a 4K resolution – a fantastic specification. The density level of 331ppi means that everything on this panel is luxuriously sharp.

I used a colorimeter to test the ZenBook’s panel and found the OLED display to deliver perfect contrast, which means the black shades here are deep, and the peak brightness of 502 nits delivers huge vibrancy and nuance when rendering colours. That backlight is powerful enough for use indoors and outside, too. 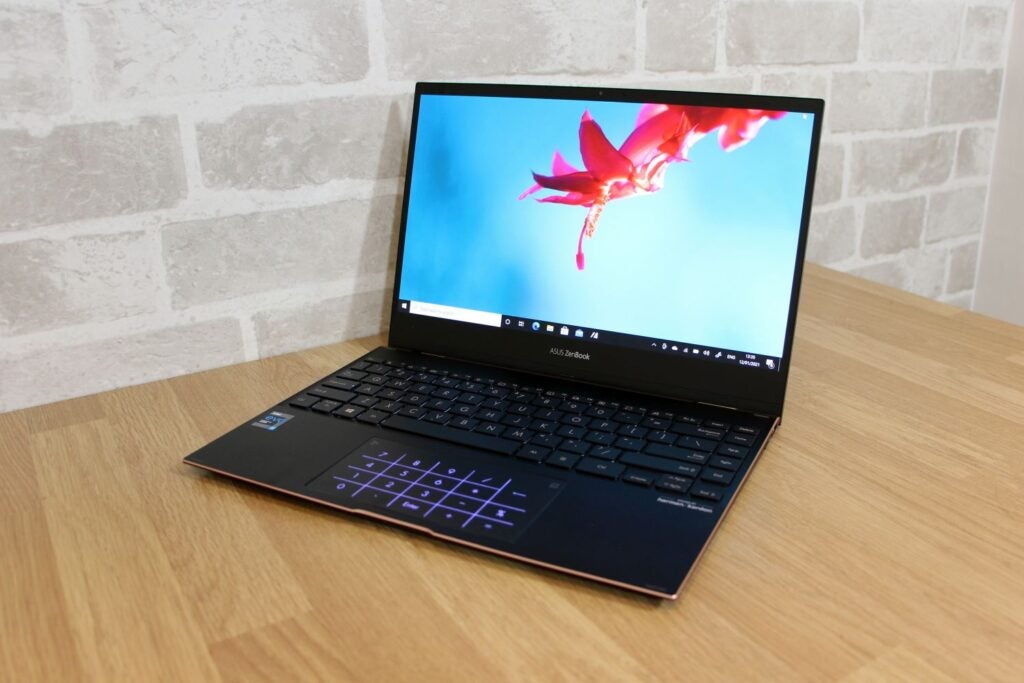 The colour temperature of 6,622K is superb and means the panel is neither oversaturated nor washed-out. The display renders more than 95% of the sRGB, Adobe RGB and DCI-P3 colour gamuts, therefore handling every colour space. The only downside is a Delta E of 3.57, but that’s no disaster – colours remain accurate, but some panels are better.

The Asus’ OLED display exceeds rivals: it has more pixels than the Apple and the Surface, and the Dell is only available with an equivalent display if you spend at least £1749/$1549. For day-to-day use, media viewing and colour-sensitive work, the Asus ZenBook Flip S’s screen is a winner.

The top-notch display is joined by great speakers. They’re louder than I expected from a laptop of this size, presenting a clear, well-defined mid-range with plenty of depth. The top-end isn’t too tinny, and there’s even some bass. For media and music, they’re good enough for daily duties.

Performance – It’s good, but not great

Intel’s Tiger Lake architecture promises performance improvements, and the Core i7-1165G7 chip is among the best you can currently find in a laptop. The rest of the UX371’s specification is reasonable. It includes 16GB of dual-channel memory, a 1TB SSD, dual-band Wi-Fi 6 and Intel’s updated Iris Xe graphics core.

I used various benchmark software to put the ZenBook’s CPU to the test. The Dell XPS 13 uses the same chip, and it was around 500 points quicker in the multi-threaded test; other machines clearly deploy this chip more effectively. And then there’s the MacBook Air’s Apple M1 chip, which was faster in both Geekbench 5 tests, and particularly impressed in the multi-core run.

In Geekbench 5’s single-core test, the Asus returned a benchmark score of 1538 – and that was maintained consistently. However, its initial multi-core result of 4899 dropped by around 1000 points in subsequent tests, before recovering. This laptop is evidently operating at the edge of its thermal abilities – when I pushed it in difficult multi-threaded work situations the underside became uncomfortably hot, although the machine did remain quiet. 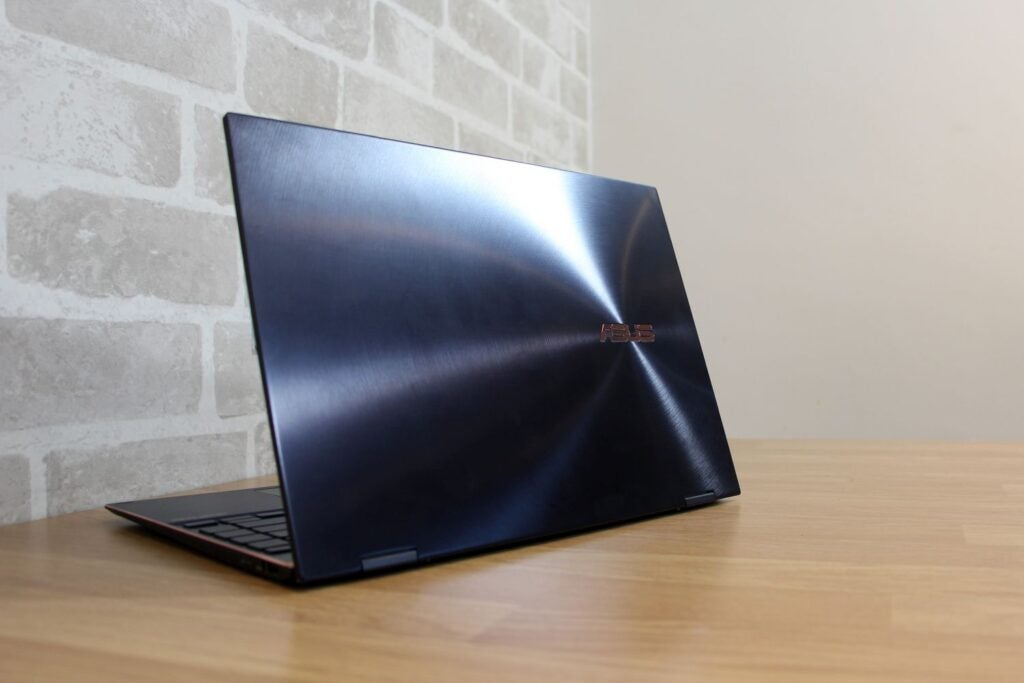 The Asus has enough power to handle everyday computing; whether it’s web-browsing, Office applications or a mix, it’s always responsive and capable. It’s undoubtedly helped by the SSD’s solid read and write speeds of 3200MB/s and 2836MB/s, which ensures saving and loading data on the hard drive will be a speedy process.

This laptop can also handle light photo-editing and creative work. However, the CPU doesn’t achieve its full potential, and laptops such as the Apple and Dell are better for tougher tasks.

Don’t expect much from this machine if you want to play games. In 3DMark Time Spy, the Iris X core scored 1440 points. That’s around 500 points better than Intel’s preceding CPUs, but this machine will only play low-end and casual games and will only deliver a small boost to graphical applications.

Battery – OLED has an impact

After I set the display set to 150 nits and looped 1080p video, the Asus’ battery lasted a reasonable 11hrs 40mins, which is almost level with the M1-powered MacBook. Increasing the display brightness did hamper longevity, however; with the OLED display running at maximum, that video lifespan declined to 9hrs 26mins. 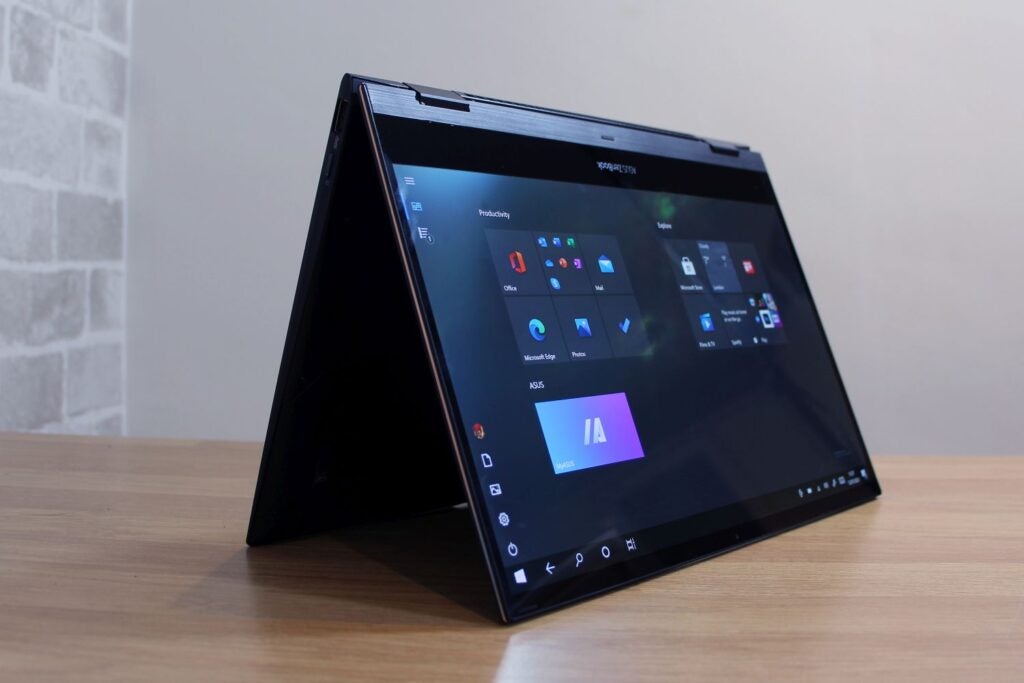 The difference was more pronounced in work tests. With the display at 150 nits the Asus lasted for 9hrs 40mins, but with the screen at full whack the battery life dropped to 5hrs 59mins.

Unless you run the screen at full brightness while you’re working, there’s enough battery power here to handle a full day of use. It’s decent, but the power-hungry OLED display ensures that the Asus will never last into a second day – and that its IPS-based rivals will all last longer.

Should you buy the
Asus ZenBook Flip S (UX371)?

There are lots of areas in which the Asus ZenBook Flip S impressed me. It has a tremendous hybrid design, superb build quality, and it comes with a great keyboard, a top-notch 4K OLED touchscreen and solid speakers.

In those respects, I think this machine is easily the match of some of the best laptops from Microsoft, Dell and Apple, and it’s a little cheaper than those rivals when they’re configured with equivalent specifications.

Overall, the components are good enough to handle everyday work, but if performance or battery life are vital considerations then I’d recommend looking elsewhere.