The Surface Book 3’s design is beginning to look a little dated, but it's convertible form factor makes it a very compelling device for power users.

Unlike its smaller siblings, the Surface Book 3 is designed to be used as a laptop first and tablet second. As a result, it features a proper physical keyboard dock (not Type Cover), with its own battery and a discrete Nvidia GeForce GPU. This means it’s the only Surface convertible that’s powerful enough for gaming and creative work, and a true MacBook Pro rival.

The only downside is that Microsoft hasn’t radically reworked the device’s design from the last two generations. This gives the Surface Book 3 a slightly chunky, retro feel compared to its more established MacBook and Dell XPS competition. 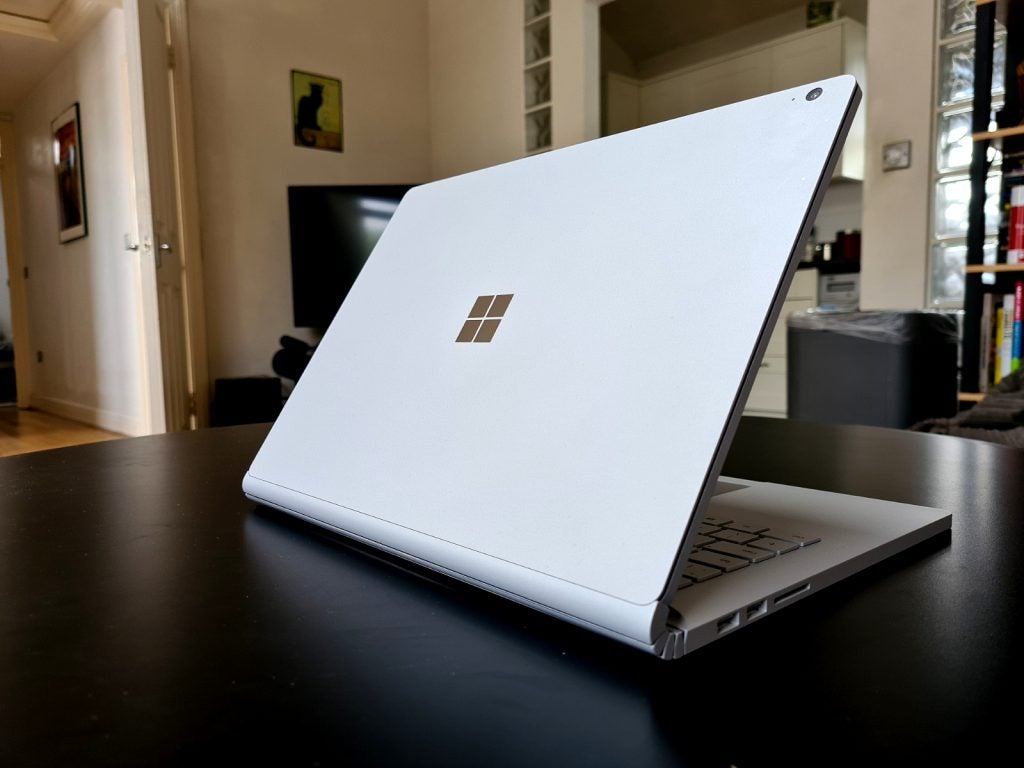 Design – The Surface Book 3 has a familiar look

The Surface Book 3 isn’t the sleekest of ultrabooks. Some users will be a little disappointed to see Microsoft hasn’t really made many changes to the third-generation Surface Book design. We’re guessing all Microsoft’s creative juice went into the delayed Surface Neo and Surface Duo.

It is available in 13.5-inch (tested) and 15-inch variants. To the naked eye both have identical designs to the Surface Book 2, with the only changes being very minor. This means the device is made of tablet and keyboard dock sections. The tablet can function as a standalone device, featuring Intel Iris graphics and its own battery. However, the lack of kickstand and ports mean it isn’t as developed as the main Surface Pro in this form factor.

The keyboard dock features a second battery, two USB 3.0 inputs, a proprietary charge port and microSD slot. It’s also where the discrete GPU is housed, so you’ll only get top notch, ultrabook-level performance with the two parts connected.

Such a combination is cool, though like the Surface Laptop 3, we’d really like Thunderbolt 3 and USB-C connectivity in today’s age. The convertible form factor does, however, make the device more useful for creatives, making it quick and easy to pop the tablet section out and sketch/take notes using the S Pen on your lap.

For those looking for an all-in-one home and work device, the convertible form factor is also great for movie streaming, letting you pop the tablet out and take it to bed with you for late night or Sunday morning movie sessions.

The only slight downside is that there’s a slight gap between the screen and keyboard close to the hinge when the device is closed. This can make it fairly easy for dirt, and other items, to fall in and scratch the screen when the Surface Book 3 is carried loose in a bag or satchel. With the 13.5-inch model weighing 1534g when docked, it’s also not the lightest option available. 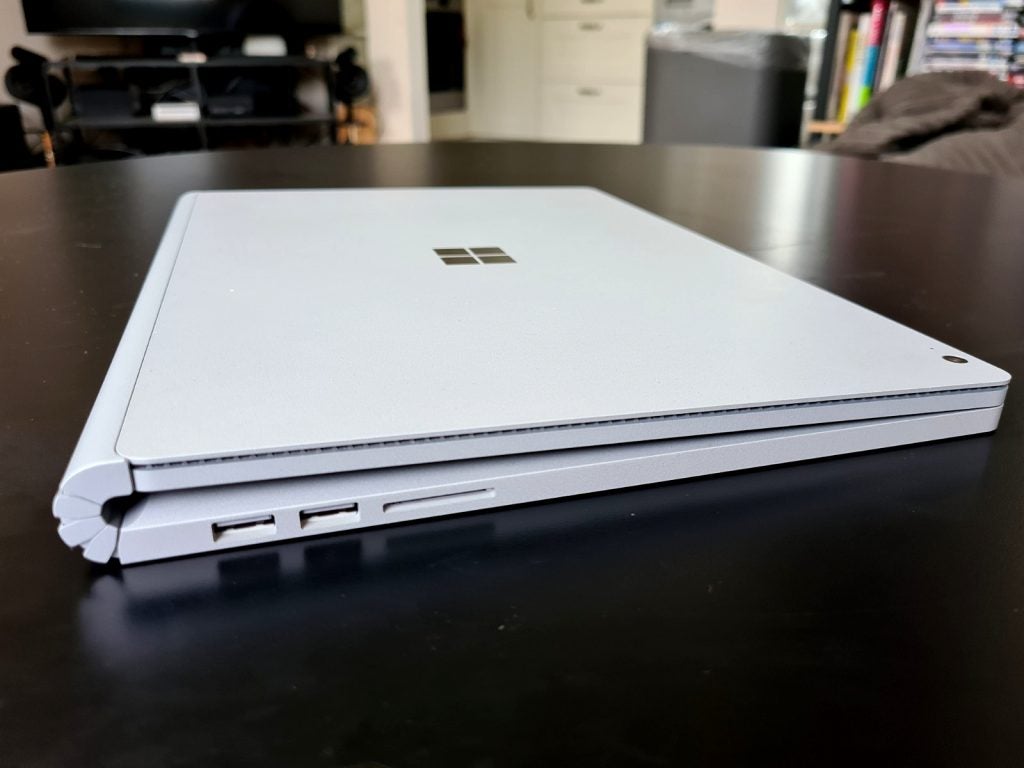 Surface Book ticks all the right boxes when it comes to usability. Though the keyboard has a sizeable border of wasted space around it compared to the MacBook Pro 13 and Dell XPS 13, it’s still wonderfully comfortable to type on. The keys are well spaced and have decent-enough travel to remain comfortable for prolonged periods.

Its keys aren’t mechanical, but they have a wonderfully tactile feel and make a pleasing “click” when you hit their actuation point. Though there’s no replacement for a mechanical keyboard when gaming, I was able to play online shooters using a wireless mouse and Surface Book 3’s keyboard with zero issue. The only laptops I’ve tested with a better keyboard come from Dell’s modern XPS-line, which use clever mag-lev switches.

The trackpad is less impressive, but still good enough. It features decent enough gesture recognition and is suitably responsive, but it’s a little small by today’s standards, especially when compared to modern MacBooks. This is particularly annoying as there’s oodles of space Microsoft could have used to stretch it out. 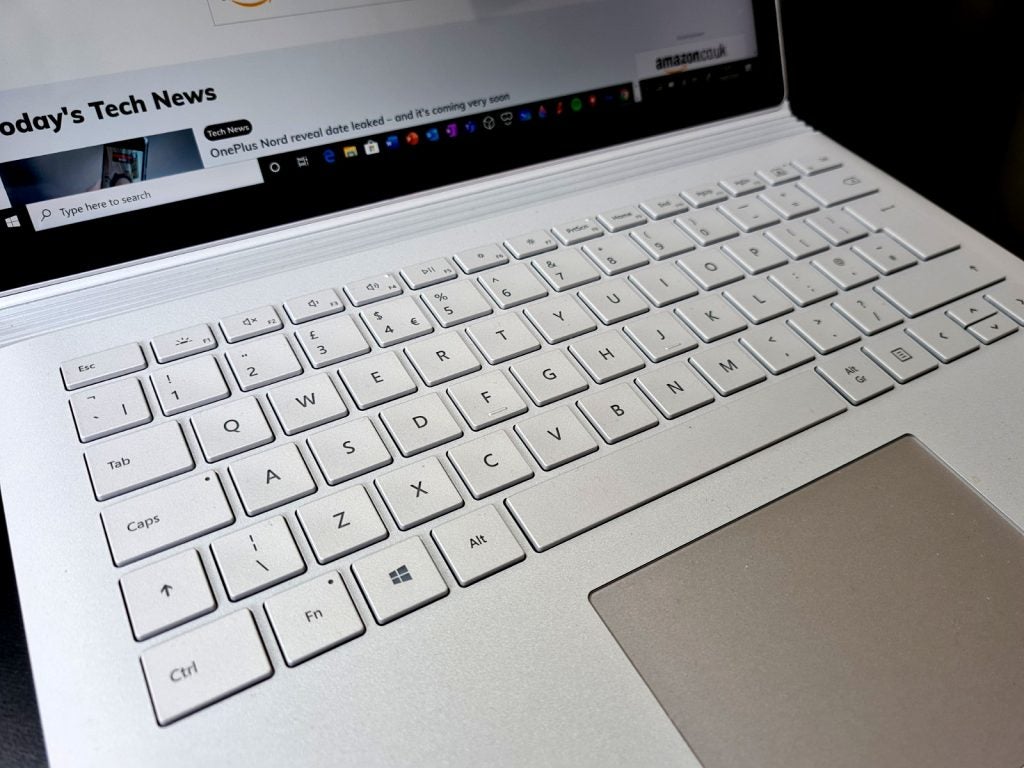 Display – Lovely screen for day-to-day use

The Surface Book 3 has a giant bezel around its 13.5-inch screen that makes the device look outright retro compared to the Dell XPS 13, and pretty much every other modern ultrabook. But, it’s a top-notch display when it comes to every-day performance.

A 3000 x 2000 resolution is more than sharp enough for movie binging, gaming and general use. It’s just shy of hitting the 4K standard, but that won’t be noticeable to the naked eye.

Cracking out a colorimeter, I recorded an inky 0.2 nit black level and 364 nit white level, resulting in a solid 1633:1 contrast ratio. The figures are similar to the levels we detected on the XPS 13 and, for non-techies, mean the screen is wonderfully vibrant and features excellent contrast and dynamism. The only mainstream laptop we’ve tested with significantly better numbers is the MacBook Pro 13-inch, which has an astoundingly high 500 nits max brightness.

This, plus the super-accurate 6505K colour temperature make the Surface Book 3 great for Netflix binging and basic office work. The latter is further aided by the custom 3:2 aspect ratio, which makes it easier to get two decently sized application windows open side by side.

Things are a little mixed for creative work, however. The 92.7% sRGB colour gamut coverage is solid and again makes it more than good enough for everyday use and gaming. But the 63.9% Adobe RGB and 65.7% DCI P3 coverage is too low for any creative work intended for use in physical media. 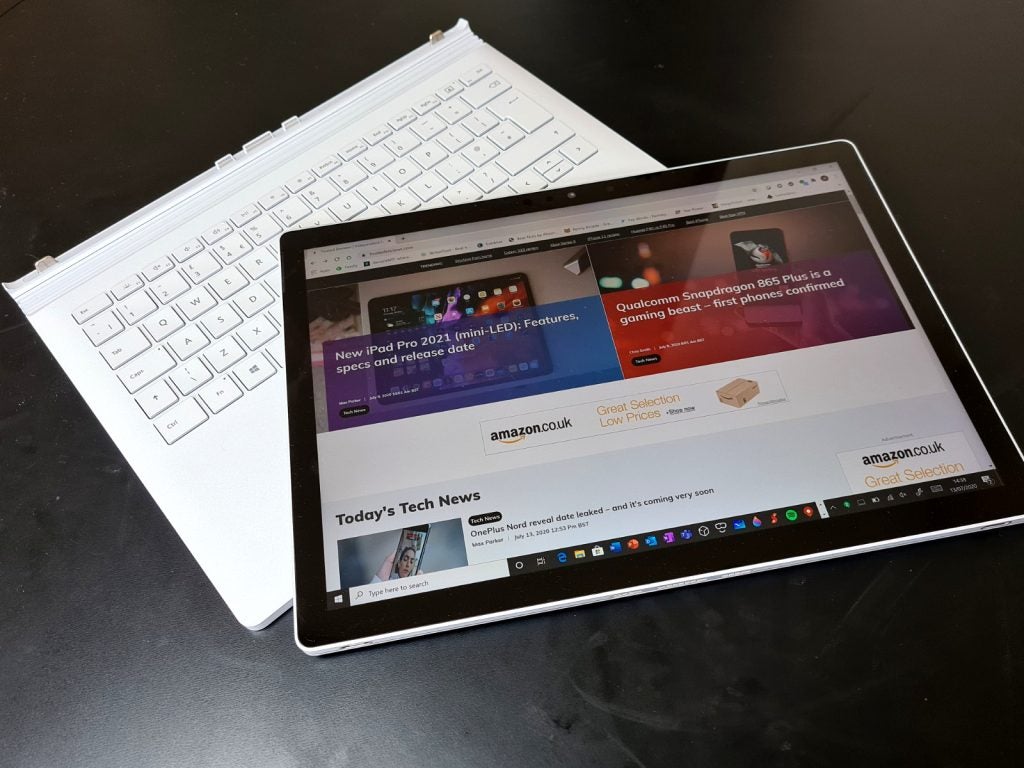 The Surface Book 3 is available in a variety of configurations, with processor peaking at an Intel Core i7-1065G7, and the graphics card offering climbing up to the Nvidia GeForce GTX 1660 Ti (although you can get the even more powerful Quadro RTX 3000 GPU via business retailers). Whichever you get will impact how it performs.

We tested the 13.5-inch model with an Intel Core i7, GTX 1650 Max-Q design and 32GB RAM. Performance was just about in line with what we’d expect from a top-end ultrabook. You can see how it scored during our synthetic benchmark tests in the table below.

Real-world use mirrored the benchmark scores. This means the device, when docked, is more than powerful enough to handle most power user tasks, like coding, engineering, 3D modelling, vector design-work and video editing. The only downside is that the latter can cause the device to heat up, though not to the point I noticed CPU throttling.

The device is also just about good enough for lightweight gaming. You’re not going to be able to get new triple-A titles running in high settings, but lightweight games like Fortnite, Apex Legends and Destiny can run at playable frame rates if you lower their graphics settings. Although it’s worth bearing in mind the display is limited to a 60Hz refresh rate.

SSD speeds were surprisingly disappointing, with read and write speeds well short of the ultrabook average. This means saving and loading data on the hard drive will take longer than it would with rival machines.

Battery life is solid if you use the Surface Book docked. Running Trusted Reviews’ standard PCMark 10 battery benchmark with the screen locked at 150nits brightness, the device lasted 8 hours 15 minutes. That’s a good two hours longer than the XPS 13.

The Surface Book 3 performed well with real-world use. Using the Surface Book 3 as my main personal laptop/tablet, the device uniformly managed a full work day’s use. Logging on to work at 8am and using it for office busy work, lightweight photo editing, web browsing, a quick games session at lunch before logging off at 5.30pm, the Surface Book crossed the finish line with a few percent battery to spare each day.

It’s fairly rare to see a laptop with a dedicated graphics card perform so well, so kudos to Microsoft. Intensive tasks such as gaming and 3D modelling will of course drain battery noticeably quicker, mind. 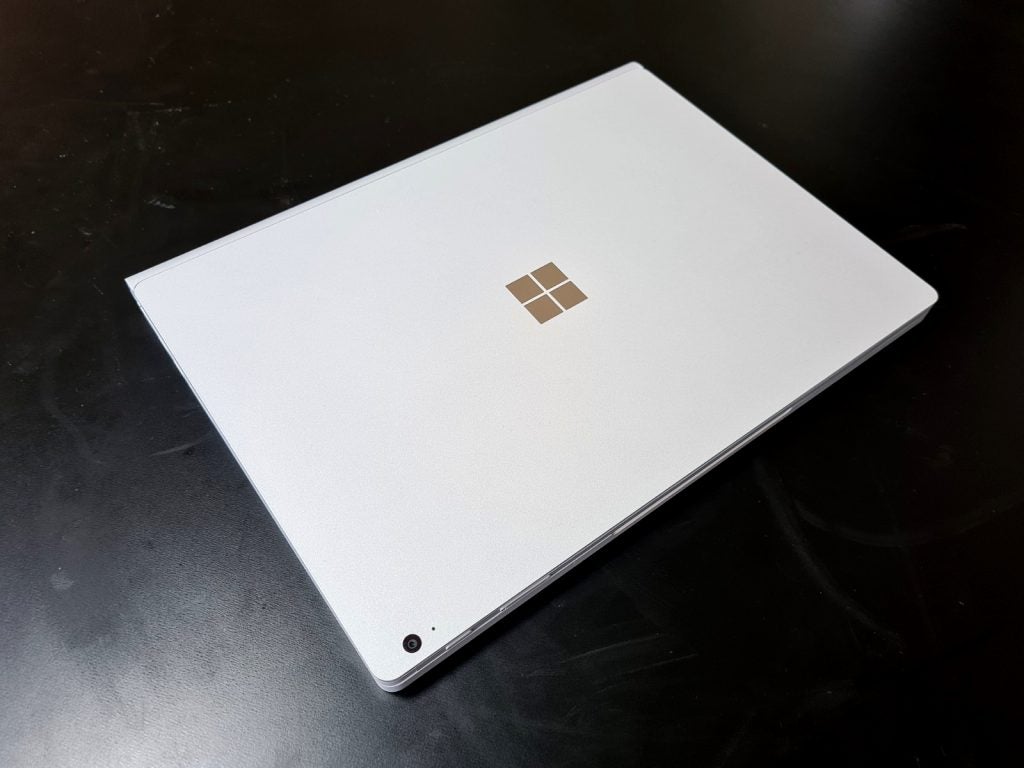 You should buy the Surface Book 3 if…

You shouldn’t buy the Surface Book 3 if…