The 2.7-3.1GHz Intel Core i7-7500U is an excellent processor that can handle video and photo editing with relative ease. It’s only a dual-core chip and therefore takes longer than its quad-core brethren to perform intensive tasks such as video rendering, but for most daily computing tasks it feels snappy and responsive. There’s also a Core i5 version available for quite £400 less than this model and comes with 8GB of RAM instead of 16GB.

Related: Core i3, i5 and i7 explained

It beat the Dell XPS 13 marginally in the GeekBench 3 benchmark, and managed a much better result than the Core i7-6500U-powered HP Spectre as well. However, this comes at the cost of both cool running and battery life (see below). It’s also much more powerful than the 12-inch MacBook, but that machine is also completely silent thanks to a lack of fan cooling. 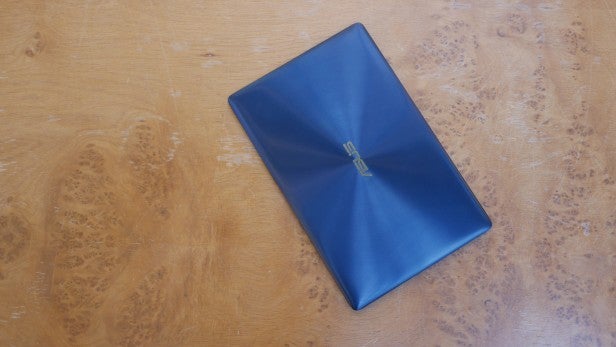 The 512GB SSD is fantastically fast, with 1351MB/s read speeds matching those of the Dell XPS 13. The lower-end model gets a slower SATA SSD, whereas the model on test here gets a full-speed PCIe-based drive.

Unsurprisingly for a laptop of this size, its fans get noisy even under moderate load, and the right side of the keyboard and wrist rest get very warm, too. Neither are huge problems, but they do slightly take away from this laptop’s otherwise cool and calm design.

You also get Intel HD Graphics 620 on board, but since this is a shared graphics chip, it’s not powerful enough for the latest games. Older and more simple titles such as RPGs will be fine at a lower resolution, as will Minecraft, but anything else wlil be too much for it.

Battery life is an area where I had a lot of problems with the ZenBook 3. Initially I was only recording very disappointing results in the easy PowerMark battery test with it usually conking out in less than 5 hours 30 minutes. I was never really able to resolve this issue on my first review unit, but the second one Asus sent performed considerably better, managing just over 9 hours in the same test. I’ve not isolated what the differences were between the two devices, but I suspect it had something to do with some rather overzealous Windows 10 background tasks. I’d recommend you keep a close eye on Task Manager when you first set up your ZenBook 3.

Even with the battery problems sorted, I still found the battery life estimation readout to be extremely volatile and it was hard to get an accurate reading. As soon as I’d do anything remotely intensive, I’d get an estimation of well under an hour, but then it would swing up in to the six-hour range seemingly at random. Ultimately, I found I could get between five and six hours of moderate use. This includes browsing media-heavy websites, sending emails and working in web apps such as Google Docs. You’ll get a lot less if you push this machine further with photo editing, for example.

It’s hard to ask for great battery life from such a small machine, but it would have been nice for it to eek out another hour or two in normal use. Still, if you work all day with it plugged in and take it home and plug it in again, you might not notice this slight shortcoming.

Should I buy the Asus ZenBook 3?

The ZenBook 3 made a lot of promises and it delivers on many of them. Its performance is seriously incredible for such a thin and light laptop, and its gorgeous design and decent speakers make a real case for themselves.

But the compromises are notable. Having just one port reduces its flexibility and battery life isn’t quite as long as I’d like.

There are alternatives. The 12-inch MacBook is nearly as light and has a higher build quality, but is much less powerful. The HP Spectre is bigger and nearly 200g heavier, but has a better-quality screen and more ports. If ultra-thinness and light weight aren’t must-haves and you want to spend £1,500, one of the high-end Dell XPS 13s will net you similar performance and better battery life, as will one of the base 13-inch MacBook Pro models.

The Core i7 ZenBook 3 might actually be overkill for many people. £400 less nets you the Core i5 version that’ll still feel sprightly in most office tasks and browsing the web, but you’ll lose performance in tasks such as photo and video editing and the SSD will be much slower. Still, I suspect this will actually be the best-value choice for most people and, although I haven’t tested it, battery life could well be slightly better.

The ZenBook 3 is technically stunning with just a few compromises.