The Asus TUF Gaming A15 is a great gaming laptop for those on a budget. It has an excellent Full HD performance, decent display and ample storage for a very generous price. It is a rather ugly laptop though, while its loud fans can be annoying, but such flaws can be overlooked if you're unwilling to pay a few hundred quid more for classier alternatives

Gaming laptops are often ridiculously expensive, with top-spec Full HD components seeing portables approach the £2000 mark. The Asus TUF Gaming A15 is trying to do away with that trend, packing a powerful performance at a reasonable price.

It’s by no means a perfect gaming laptop, with a clunky and hefty design that looks pretty ugly when sat beside the likes of the Razer Blade 15 2020, but it otherwise does such a competent job that it’s easy to overlook its flaws.

It’s also worth noting this gaming laptop is among the first to feature the new Ryzen 4000 processors, seeing CPU performance and battery efficiency trounce the majority of rivals. But are they enough to make the Asus TUF Gaming A15 one of our top recommended gaming laptops?

Let’s be blunt, the Asus TUF Gaming A15 is not a good looking gaming laptop. Asus has made a big effort to emphasize this device has gaming pedigree, implementing lots of textured grooves, angular cuts and transparent WASD keys, but this all ends up feeling too cluttered and in your face.

The plastic build also makes it feel distinctively cheap, although simultaneously feels robust enough to handle a decent number of knocks and scrapes. It has military-grade accreditation to vouch for such sturdiness too. 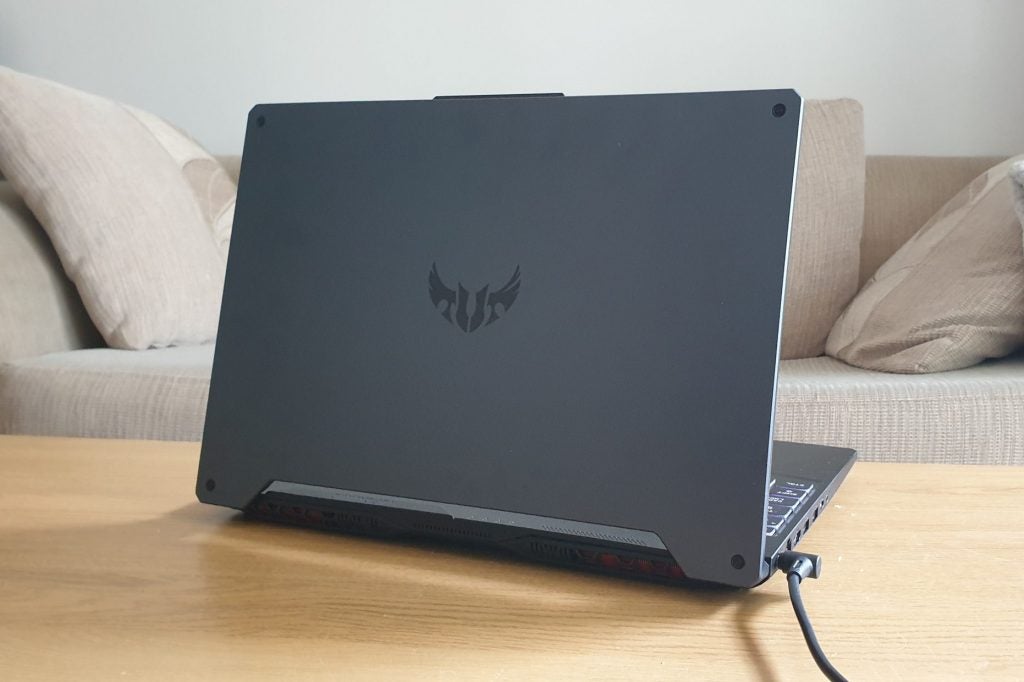 Despite the deck’s shortcomings, the lid looks slick. The combination of a simple logo and the shiny dark silver surface look sophisticated, a huge contrast to the rest of the laptop’s design.

Weighing in at 2.3kg, this isn’t the heaviest gaming laptop around, but the introduction of the 1.69kg ROG Zephyrus G14 has made me crave smaller and lighter machines. 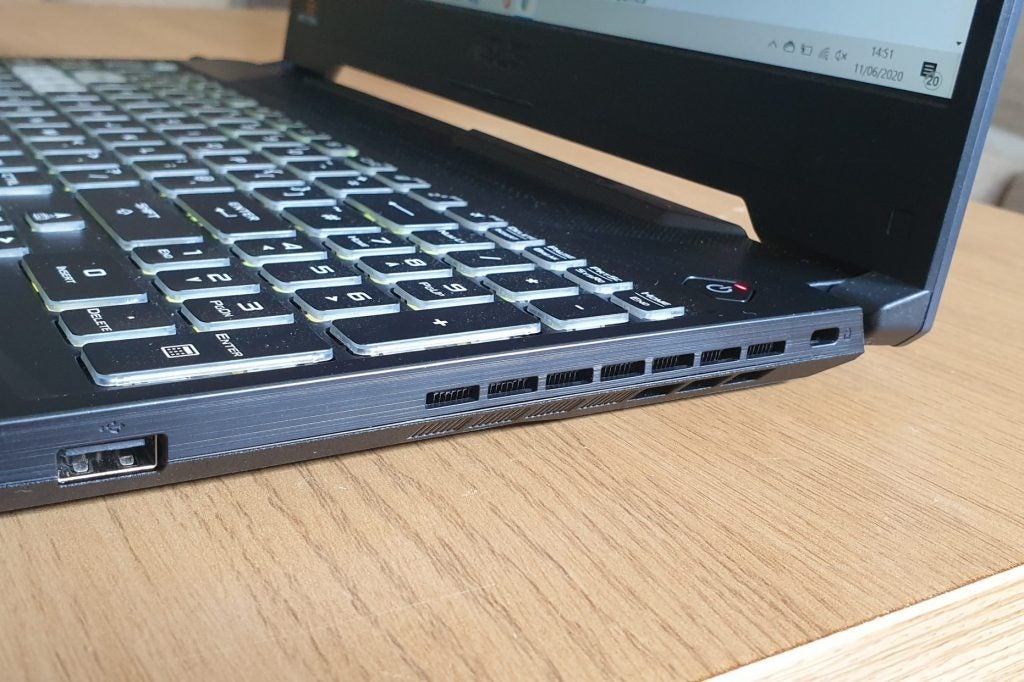 The A15 at least can’t be accused of lacking ports, featuring 3x USB-A, USB-C (with DisplayPort support), HDMI, Ethernet and a headphone jack. There is unfortunately no support for Thunderbolt 3, however.

The Asus TUF Gaming A15 has a great gaming keyboard, although could potentially divide opinion. Its keys offer plenty of travel so it’s comfortable for both gaming and typing, but the actuation is signalled with a subtle and quiet thud.

Those who enjoy an audible click with key presses will be disappointed here, as hitting keys lacks that crunchy feel of a mechanical board. But those who want to use this laptop in front of friends, family and colleagues without disturbing them will be pleased by the quiet clicks. 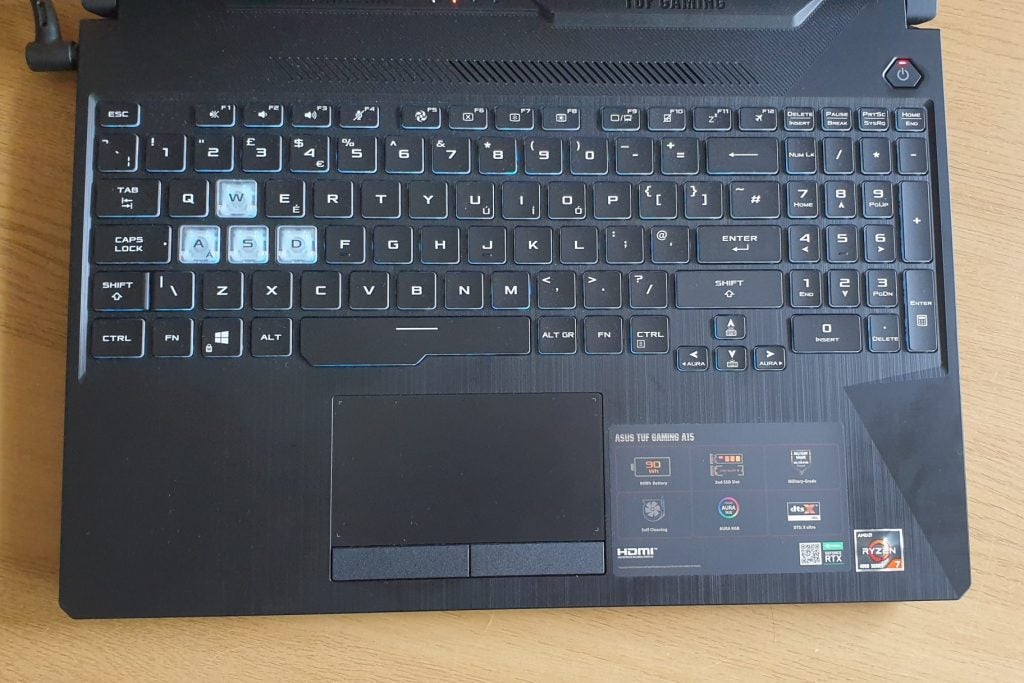 The A15 features a number keypad, which is no surprise given the broad size of the laptop, although it’s a shame that Asus has reduced the size of the arrow keys to accommodate it.

Fully functioning RGB lighting is present, with the pre-installed Armoury Crate allowing you to switch between effects such as colour cycle, strobing and static. You can even turn off the lighting completely if you prefer. 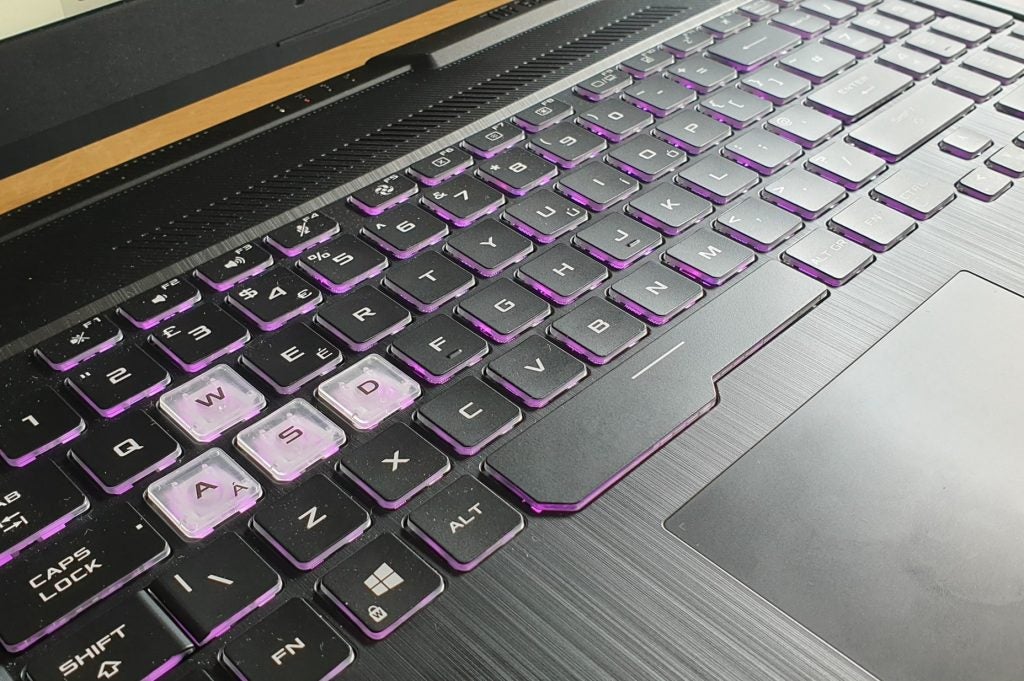 There are no macro keys here sadly, and it’s not possible to make custom ones as you can do with Razer laptops. That’s understandably a dealbreaker for many gamers, but the A15 is pitched towards casual users where it’s not necessarily required.

The trackpad is smooth and responsive, proving faultless for web browsing and menu navigation. Both the right and left clickers feel a little spongy, but not in a bad way. My clicks were always registered without issue, which isn’t always the case with budget gaming laptops of this ilk. That said, a gaming mouse will always be the preferable alternative when gaming.

When playing Valorant, it displayed the cartoonish colours competently – I never once wished I was using a more accomplished IPS panel. The 144Hz refresh rate is suitably high too, and feels the sweet spot for casual gamers. The inclusion of Adaptive Sync also helps to ensure there won’t be any ugly screen tearing. 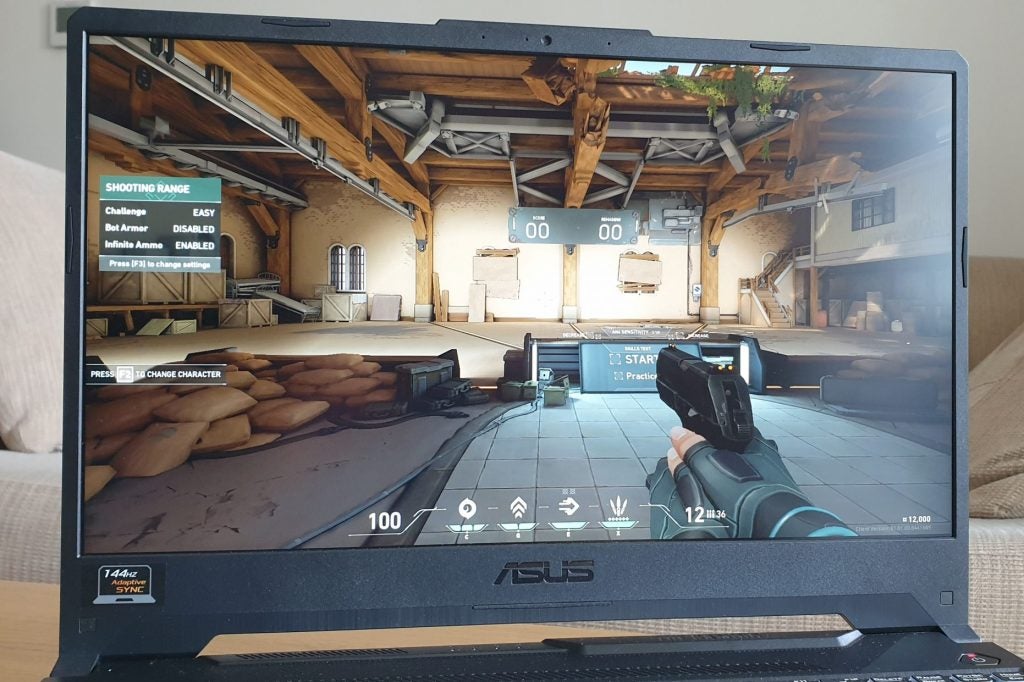 Colorimeter benchmark results also prove to be adequate, achieving the average peak brightness for laptops and a respectable 1213:1 contrast ratio. The screen presents natural white light with no distorted blue or red tones creeping in.

Colour accuracy is admittedly poor, with an sRGB colour coverage of just 58%. This won’t really be an issue for gaming, but does rule it out as a viable option for design or photo-editing work.

The Asus TUF Gaming A15 does a solid job at the essentials, with a Full HD performance superior to more expensive alternatives.

The most notable feature here is the use of Ryzen 4000 processors, with the A15 becoming one of the very first devices to use the chip. The configuration I tested saw a Ryzen 7 4800H.

Our benchmark results showed the A15 to have one of the best multi-core CPU performances of any gaming laptops we’ve tested, proving it to be a great option for creative tasks and multi-tasking jobs. Its single-core performance isn’t quite as strong, which is arguably more important for gaming, but it’s comfortably still good enough to run the most demanding AAA video games.

Graphics card options range from the GTX 1650 to the RTX 2060, with the latter only costing around £1300 which is great value. Our review model featured the RTX 2060, which ran every AAA game in Full HD at a respectable frame rate.

In fact, the Asus TUF Gaming A15 outperformed more expensive laptops, including the ROG Zephyrus G14 which currently sits at the top of our ‘Best Gaming Laptop’ ranking.

My biggest criticism here is the loud fan whirring, which made it immediately obvious to nearby colleagues when I had started up a game and could prove distracting. I never noticed the laptop to heat up though, which is always positive for a gaming device.

The SSD read and write speeds weren’t quite as impressive – at 1932 MB/s and 1776 MB/s respectively – but still reasonably high enough to ensure loading and installing times won’t take too long. On a more positive note, you get an incredible amount of storage at 1TB in this specific model.

Gaming laptops often have a notoriously poor battery life, averaging around three to four hours for basic productivity tasks. The Asus TUF Gaming A15 saw a higher-than-average result at 4 hours and 42 minutes when running the PCMark 10 battery benchmark simulation.

This was a superb result, which is no doubt thanks to the excellent power efficiency of the Ryzen 4000 processor. Of course, battery life won’t be that good when gaming, but it’s recommended you keep the laptop plugged in for that scenario. 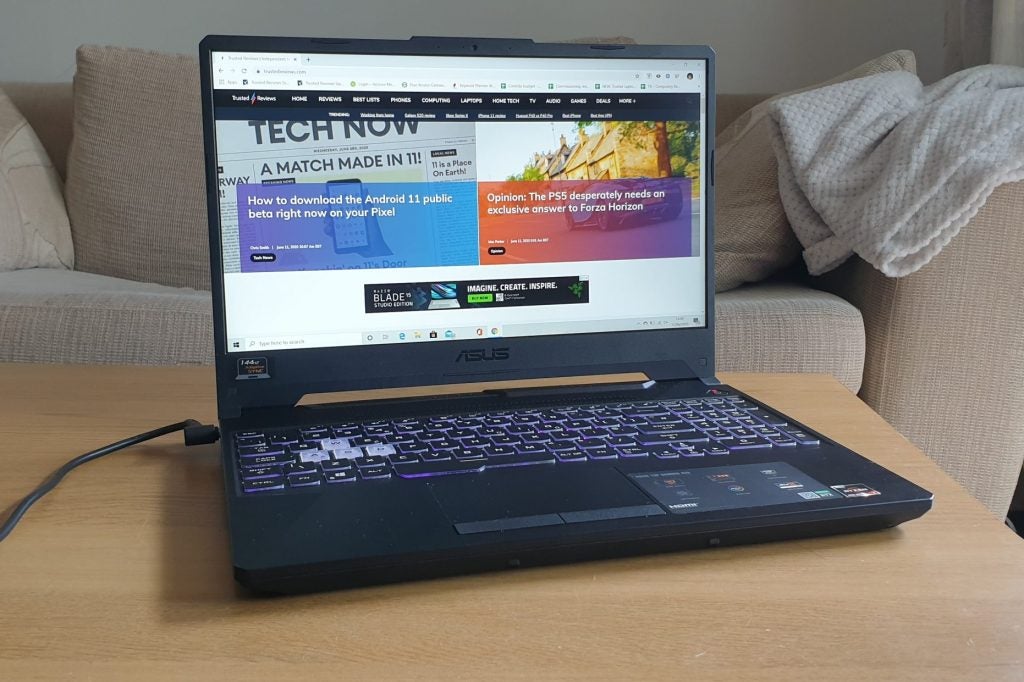 Should you buy the Asus TUF Gaming A15?

The Asus TUF Gaming A15 represents superb value, with the RTX 2060 model priced at around £1300, despite similar spec laptops costing a few hundred quid more. For the money, you’re getting a fantastic Full HD performance, decent display and abundance of storage.

There are of course compromises here, as with any budget device, as the A15 isn’t the best looking laptop and is also pretty hefty. Alternatives such as the Razer Blade 15 and Zephyrus G14 look far better, but also cost a decent amount more.

If you’re after a budget gaming laptop that can play any AAA game at a decent frame rate, the Asus TUF Gaming A15 is one of your best bets – you just have to accept it’s a bit of an eyesore.