One of the Asus Transformer series’s strengths is battery life. The tablets themselves have tended to offer stamina roughly on-par with the other high-end tablets, but as the keyboard docks have featured their own batteries, you could more-or-less double that stamina.

This time battery life of the Asus Transformer Pad TF701 is better than average even without the keyboard in tow. Left to play a video at medium brightness with Wi-Fi switched off, the Transformer lasts for around 12 hours. That’s excellent. The tablet turns itself into standby mode as standard when the battery hits the 30 per cent mark, which seems a bit aggressive when others do so when the battery is much closer to death, but it’s no biggie in real-world use as you can simply bring the tablet back to life with the press of a button.

With the tablet docked this is bumped-up to 17 hours with light use – a little less for our video test. That’s exceptional stamina, whether for a tablet or a laptop-like device. The tablet part has a battery around half the size of the one in the tablet, with a 16kWh battery next to the tablet’s 32kWh one. It provides an extra 40-odd per cent of life. 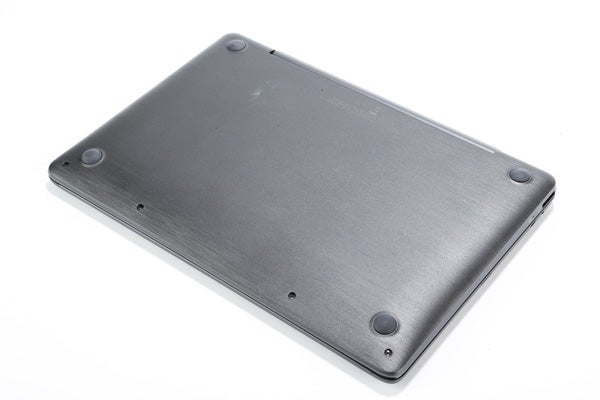 Why does it last so long? It’s a combination of the IGZO screen, the efficiency of the Tegra 4 processor and – we imagine – a bit of Asus software magic.

There are a number of power-optimising modes you can use to get a bit of extra stamina in more conventional use, too. There’s a power-friendly speaker mode that cuts out some of the bass, and a much smarter than average power-efficient mode.

It performs the usual tricks of managing screen brightness and network access, but lets you alter when it’s used based on what you’re doing – one setting for watching a movie, another for reading emails and so on.

The Transformer Pad has just one speaker – with a grille drilled into one end of the aluminium rear. Without much focus put on the speaker on Asus’s part, we weren’t expecting much, but it’s a perfectly good tablet speaker.

There’s the extra degree of mid-range bulk and richness to the sound that usually comes from having an area inside the Transformer Pad’s body in which sound can resonate a bit before escaping out of the grille. Asus offers an audio control panel that lets you alter the sound profile for games, music or speech – each EQ’ing the sound to offer a different frequency focus. This control panel is one of the widget overlays too, meaning you can access it wherever you are.

Asus seems to have significantly improved the speaker over earlier Transformer models. But there is still a way to go here.

Top volume could be higher and when playing a game or watching a movie it’s clear that the sound is only coming out of one side of the tablet. We want stereo speakers here, badly.

Is there anything else missing? There have been 3G editions of Transformer tablets in the past, but the version we’re looking at is Wi-Fi only all the way. Making a 3G tablet of this grade for under £450 would be tricky at this point.

However, the Asus Transformer Pad TF701 does have GPS, letting you use it as an in-car GPS with either an app that offers offline maps or when tethered to a mobile phone’s mobile internet connection. Other connections include Bluetooth, pretty advanced Wi-Fi (with support for a/b/g/n standards) and Miracast. That’s a screen transmission standard that lets you share what’s on the Transformer’s screen with another display using Wi-Fi Direct. 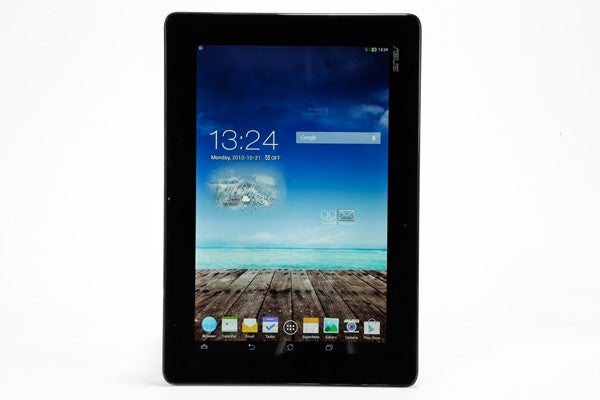 Should I buy the Asus Transformer Pad TF701?

The Asus Transformer Pad TF701 is a solid, if slightly unimaginitive, update to the Transformer Pad Infinity. Its screen is sharper, its processor faster and battery life is as good as we expected. But perhaps the most important change is the price.

At £430, it’s cheaper than the price the Infinity launched at, and isn’t much pricier than an iPad. Given the sheer flexibility and power on tap here, that’s a bit of a bargain. The Surface Pro 2 is a much more serious laptop-replacing tablet, but it costs a good deal more (and doesn’t last anywhere near as long off a charge).

Our only semi-serious issue is that the tablet on its own is starting to look a little dated thanks to its large bezel – something that will only become more apparent once the iPad 5 gets into hands. And despite the power on tap, you have to live with a small amount of intermittent lag.

The Asus Transformer Pad TF701T takes everything that was good about the Infinity, updates it and sells it at a lower price. The tablet part alone isn’t tremendously elegant in some respects, but this is a great package.

Next, head to list of the top 10 best Android tablets