If you’ve used a recent iPad or Nexus 7 you’ll find the  TF103’s display very blocky and soft. It just doesn’t have the pixel count to offer a remotely sharp image by current tablet standards. 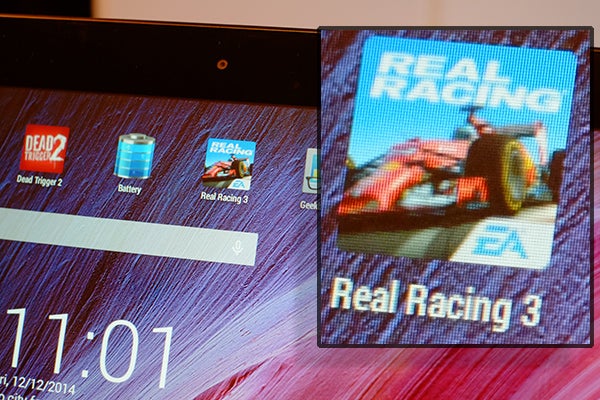 This is a low-cost display, and it shows – not just in resolution, either.

Colours are fairly good but a little muted and contrast is nowhere near as good as the top tablets. It leads to images looking a little washed out, as well as pixellated. The actual colour tone’s fairly good, though – even when Asus’s tablet displays aren’t perfect they generally offer fairly natural-looking tones.

From a more practical perspective, the screen finish may also present an issue. The Asus Transformer Pad TF103’s top layer is extremely reflective, which will become a pain if you try to use the thing as a laptop when out and about. 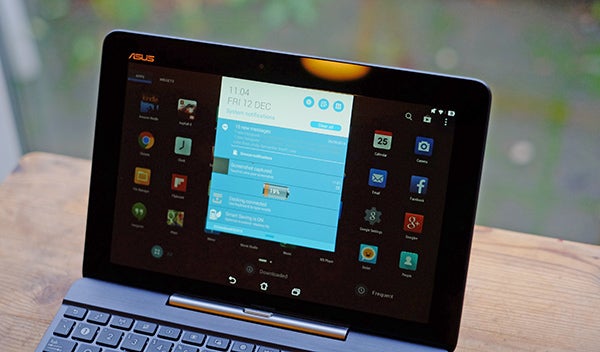 We have to apply the same caveat used when we talked about the Asus Transformer Pad TF103’s design, though. This is a fairly ropey screen for a tablet.

Laptops at the price use, almost exclusively, TN-based screens that suffer from just as dodgy, if not worse, colour and contrast, as well as other issues. Where a cheap laptop screen will show severe contrast shift at an angle, the Asus Transformer Pad TF103 doesn’t, thanks to its use of IPS tech.

It’s this IPS technology that makes the TF103 work fairly well as a tablet, despite the other image issues. If this tablet had a 1080p screen rather than its 1280 x 800-pixel one, we’d be over the moon even with the contrast and colour limitations. As is, it’s just that bit too grainy for comfort if you’re going to be using it as a tablet for anything close to half the time.

How about the keyboard? This is crucial to the Asus Transformer Pad TF103 offering a laptop experience that makes up for the deficiencies we find hard to swallow when using the device as a tablet.

The good news is that it’s much better than using a touchscreen virtual keyboard. We tried using the Transformer Pad TF103 as our main work computer for a couple of days, and part of this review was even written using the device. 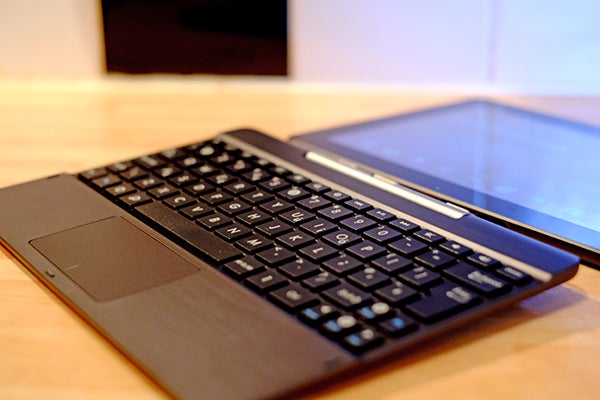 Sure enough, it does its job. Asus has also clearly tried to make the keyboard action as pronounced as possible, with a very distinct travel involved in each key press.

However, it never stops feeling like a compromise, and this is something that is common among 10-inch hybrids. The keys are fairly cramped, requiring not just a bedding-in period but a change in how your hold your hands while typing whenever you use the Asus Transformer Pad TF103.

It’s this change in how you hold yourself that can really make you feel little uncomfortable when typing for longer periods. Until relatively recently this was something you just had to make do with when using a hybrid, but there are now several slightly larger options on offer, including the £330 Asus T200 and Microsoft Surface Pro 3. These all run Windows, though, putting their focus a bit more on the laptop side of things.

Asus has also severely limited the angle at which the Asus Transformer Pad TF103 can be opened, offering significantly less than 45 degrees back from ‘upright’. The reasoning is obvious – as both parts weigh 550g, at 45 degrees the tiniest jolt would make the thing topple over. We may be imagining it, but some former Asus hybrids seem to let you open the hinge up slightly further. 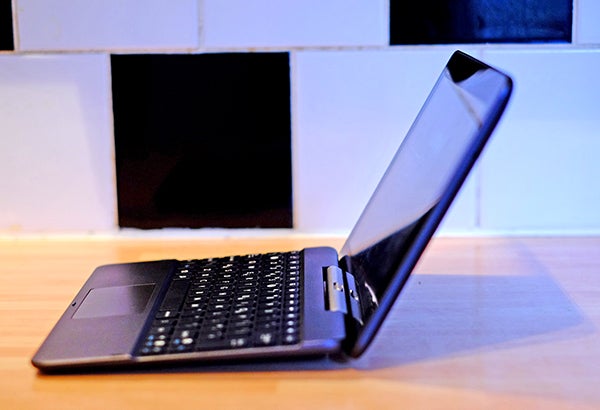 The hinge only opens this far

The benefit is that the Asus Transformer Pad TF103 can actually be used on your knees without it falling over. Its keyboard’s front raises a bit, but Asus seems to have tweaked the design a little for on-the-knees use. There are wins and losses in the current design.

As well as the full Qwerty layout, the TF103 offers a handy raft of shortcut buttons that let you control media, head to the settings menu and adjust screen brightness. You might expect keyboard and mouse-style input to feel a bit out of place in Android, but it’s not too bad.

However, support in apps and games depends on the support provided by developers. We found this particularly obvious in games. Where ‘mouse look’ seems like a no-brainer inclusion in games made for Windows, we couldn’t get the mousepad to act as a controller in one of our test favourites, Dead Trigger 2. While the Android system makes reasonable provision for use with a mouse, that doesn’t mean third-party developers will have.

The TF103’s trackpad is very small, and to make up for that sensitivity is set fairly high by default, ensuring you don’t have to paw away at the thing like a cat playing with a piece of string. 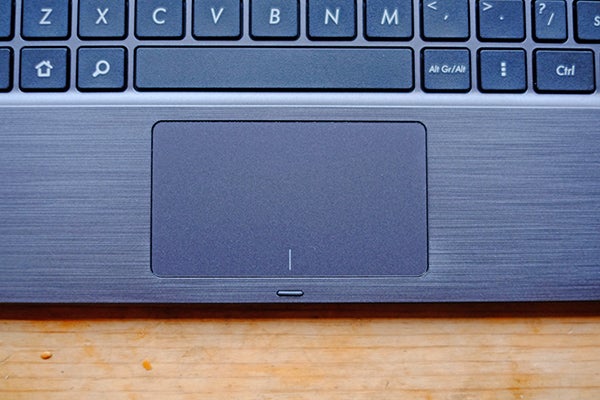 We found the trackpad does tend to feel at least as cramped as the keyboard, if not more, but you fall into a fairly natural rhythm of using the touchscreen and trackpad depending on which is quicker and easier.

It supports some multi-touch gestures, too, enabling you to scroll through websites and flick through menus with a two-finger swipe.