What is the Asus Transformer Pad TF103?

The Asus Transformer Pad TF103 is a supremely low-cost hybrid. A mere £180 gets you an Android tablet that slots into a keyboard dock, turning it into a netbook-style laptop.

When hybrid rivals such as the Microsoft Surface Pro 3 charge you £100 or more just for the keyboard, the TF103 seems almost alarmingly cheap. The closer you look, though, the more compromises you see, finally proving this is a decent deal rather than the bargain of the year.

With slightly larger low-cost hybrids out and far better entry-level tablets available, the Asus Transformer Pad TF103 is a compromised solution on both fronts. However, if your demands on both the tablet and laptop ends are strictly casual, it makes a lot of sense, especially now the price has dropped significantly from its original £260. 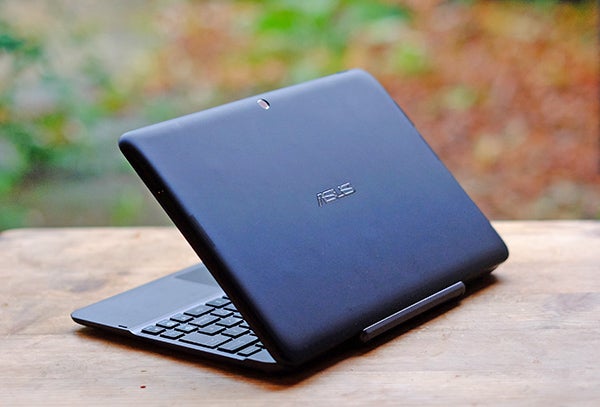 The Asus Transformer Pad TF103 looks quite a lot like the first Transformer tablet, which we reviewed all the way back in 2011. Three and a half years isn’t a lot in every field, but it’s an aeon in tech.

When surveyed as a tablet, the TF103 appears dated. The wide bezels and chunky 10mm body are things we’ve seen filter out of most tablets over the last couple of years, but they’re here loud and proud like the kid who brought a briefcase to the first day of school.

Switch things up and view the Transformer Pad TF103 as a laptop, of course, and that all changes. Budget laptops are always a little dowdy, and thanks to its small frame the TF103 is among the neater computers you can get at the price. The clear difference to note, though, is that this ‘laptop’ runs Android where budget notebooks run Windows 8.1 for the most part. While there are plenty of office apps for Android, the experience won’t be quite the same – bear this in mind. 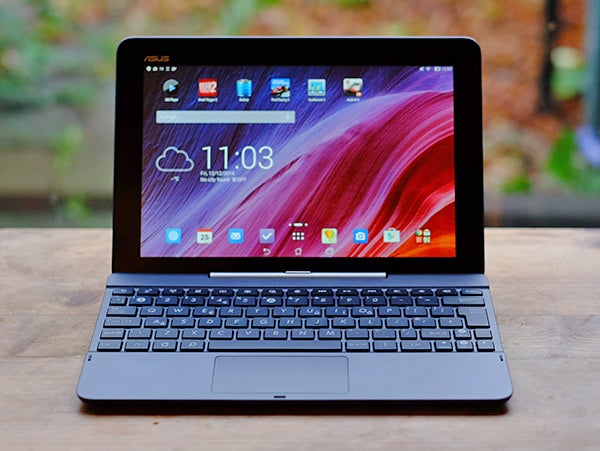 To switch between its dual roles as laptop and tablet, the Asus Transformer Pad TF103 uses a smart hinge arrangement, with a button in its centre releasing the tablet part. For what’s a relatively young type of gadget, there’s a nice old-fashioned thunk, clunk tactility to the mechanism.

It feels sturdy, too, with the core hinge made of metal rather than plastic.

The rest of the Transformer Pad TF103 is rather more basic. Its tablet part is plastic aside from the glass front covering, and quite heavy by recent standards. You wouldn’t want to hold it one-handed. However, the finish on the back is at least nice and soft, making it comfy to grip with two hands.

The keyboard base is all plastic, with a hollowness that ensures it feels about as cheap as it is. It appears to be very similar to the keyboard base of the Asus T100, a Windows hybrid now available for around the same price. We’ll get onto what its typing experience is like a little later. 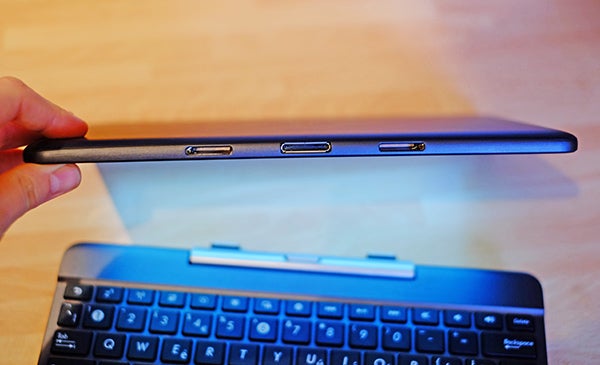 One of the key draws of some of Asus’s other Transformer hybrids was that they offered secondary batteries in their keyboards that could boost stamina massively, making the hours of battery life available reach double figures. However, there’s no such feature here.

Consequently, battery life is merely respectable rather than remarkable. When playing a looped 720p video, the Asus Transformer Pad TF103 lasts for 8hrs 45mins off a charge. That’s not too far off the 9hrs 30mins promised by Asus.

We did note that the battery dropped much, much more quickly when 3D gaming – you should only expect a few hours of play if you’re going to push the TF103 that bit more. 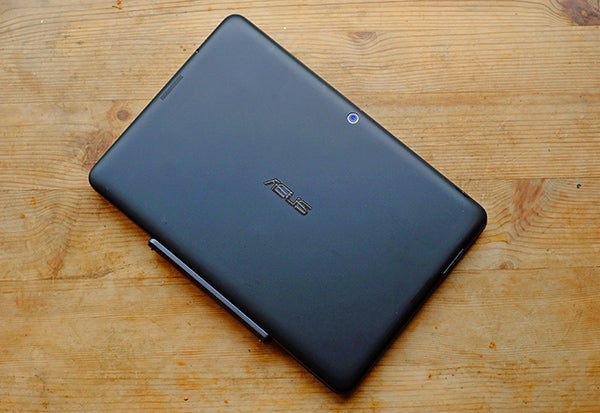 Still, despite the lesser battery life and chunky frame of the tablet part, it’s still ridiculously convenient in several respects. Keyboard and tablet together weigh 1.1kg, which is MacBook Air-like, and it’s small and light enough to carry around like a notepad between rooms or – if you’re at work – meetings.

The connectivity is fairly well suited to the dual roles the Asus Transformer Pad TF103 offers, too. There’s a full-size USB port on the keyboard base, letting you easily attach a mouse or external hard drive, and both a headphone jack and microSD slot on the tablet part.

With a Micro USB socket for charging the battery, Android mobile users can use their phone charger to top up the TF103.

There’s 16GB of internal memory, which naturally sounds like nothing when budget tabs will often have 500GB hard drives. However, it’s a fair amount for an entry-level Android slate.