There are lots of nice little keyboard/mouse optimisations in Android you might not expect coming from an Android phone or tablet, but it’s otherwise pretty similar software-wise to Asus’s other Android gear.

You get Android 4.4.2 – not totally up-to-date but not too old either – and the custom ZenUI. It’s a fairly inoffensive interface that tweaks the look a bit and provides a neat lock screen that handily packs in a bit more info than the standard one. It’s not flat-out better than the standard interface, but the little embellishments work pretty well when there’s so much screen space to play with.

Performance is fairly good, too. While the Asus Transformer Pad TF103 doesn’t have anything like the power of an Intel Core processor you could get in a slightly more expensive ‘standard’ laptop, what it packs is very good for an entry-level tablet. 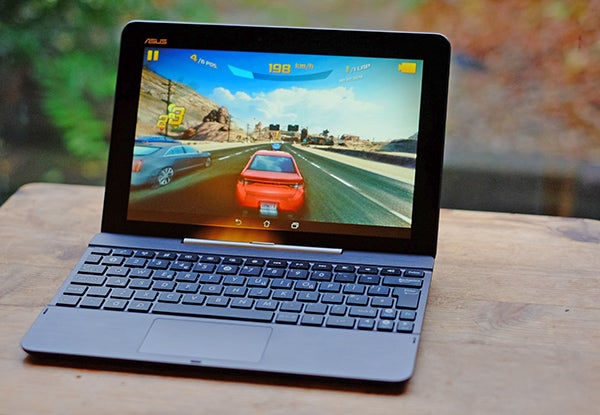 The Asus Transformer Pad TF103 uses a quad-core Intel Atom Z3745 CPU, a 64-bit processor clocked at 1.86GHz (the standard clock speed is 1.33GHz, but it seems to be overclocked in this model). It’s running on the existing Intel Android kernel rather than the 64-bit framework provided by Android 5.0 Lollipop, but that doesn’t stop it from providing impressive benchmark results.

In Geekbench 3 it comes away with 2329 points, a good 1000 more than we’d expect from the supremely popular Snapdragon 400 CPU used in lots of lower-cost phones and tablets. To get this sort of result from a tablet this cheap is impressive.

Of course, there’s also the question of what that power gets you, especially when it’s currently not working within the ‘native’ bounds of Android thanks to the use of that custom 64-bit kernel. 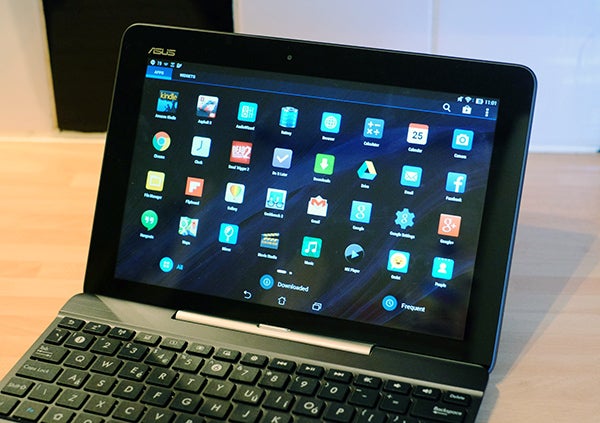 Here’s the issue: games are often the most challenging tasks we hand to our laptops and tablets, and here that’s limited by the resolution. 720p-ish games look great on a 5-inch screen, but on a 10.1-inch one, the blockiness becomes pretty obvious.

We were also not all that happy with some of the pure gaming performance levels, despite only having 1280 x 800 pixels to render. At the highest detail setting in Dead Trigger 2 or Asphalt 8 there’s a clear drop in the frame rate that while not runing playability robs a game of its smoothness. This is totally not consistent with the Geekbench 3 score, which is at a similar level to the Snapdragon 800 – a fairly high-end CPU that would offer better gaming performance.

It’s proof that raw power isn’t everything, and suggests that many Android games may not be all that well optimised for the Intel HD graphics chipset used in the Asus Transformer Pad TF103’s system-on-chip. Unfortunately, while the benchmarks impress we’re ultimately left with a core experience that feels about right for the money and not a great deal more. Fingers crossed that may improve should the tablet get an update to Android 5.0 and its native 64-bit support. 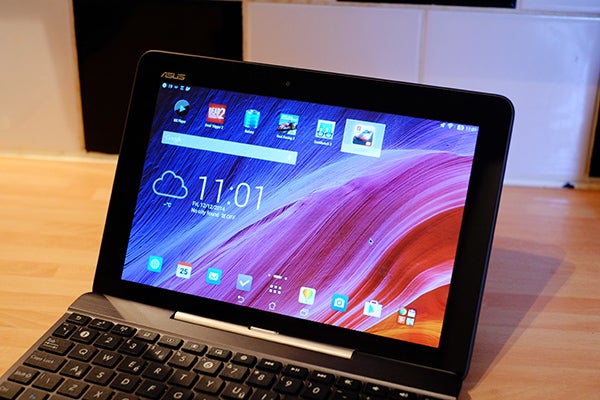 We were also not all that impressed by the stability of the Asus Transformer Pad TF103. We experienced numerous crash bugs when using third-party apps, which acted as an annoying little roadblock to our testing. While Asus updated many of its Android devices from Android 4.3 to Android 4.4.2 fairly recently, it feels like we’re a few minor updates from where we should be.

From areas that need a tiny bit more attention to ones we don’t think matter a great deal, we come to the Asus Transformer Pad TF103’s cameras.

There are two of them, and they’re both rubbish. You get a 2-megapixel one on the back and a VGA one up front. Aside from videocalling, there’s virtually no good use for them, as their quality is very poor compared to all but the worst phones. Given the price, we don’t mind that they’re so poor. 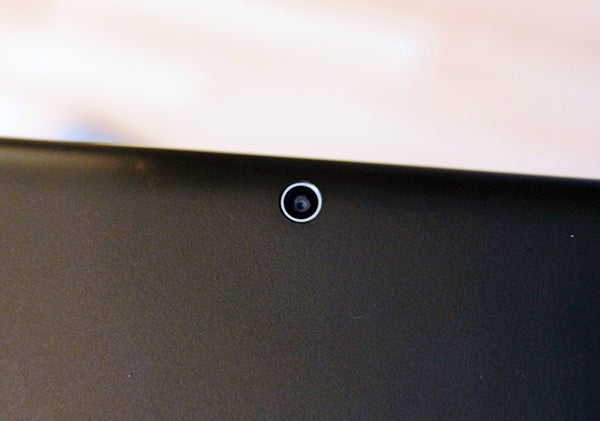 Asus has thankfully put more effort into the Transformer Pad 103C’s speakers. There are two of them, sitting to each side of the tablet’s rear to give you a legitimate stereo image when holding the tablet in front of your face. Sound quality isn’t too exciting, with the sort of slightly thin tone we’re used to in tablets, but it’s a fairly good performance for a bargain basement hybrid.

As is predictable in a low-end device, extra features are kept minimal. There’s no NFC, no mobile Internet, no IR blaster and no ac-grade Wi-Fi (just b/g/n). You do get GPS and Bluetooth 4.0, though, which we think are the most important elements for a current lower-end tablet. 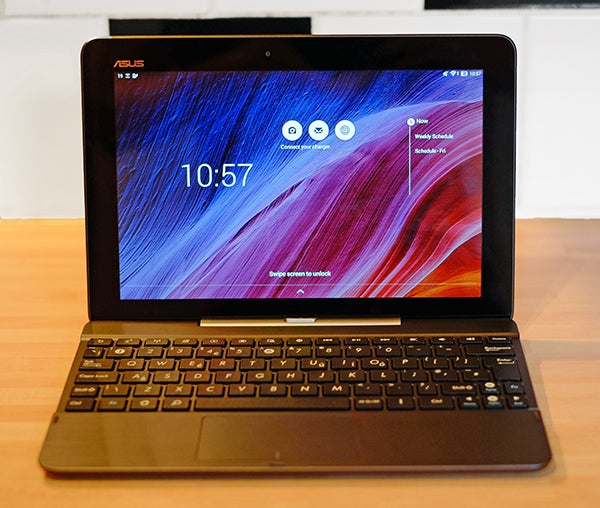 Should I buy the Asus Transformer Pad TF103?

The Asus Transformer Pad TF103 is a very low-cost hybrid tablet that scrapes off all the fancy extras often seen in tablets to offer something cheap enough to work as a complement to a main laptop.

As a result it’s pretty attractive. However, both of its sides end up feeling a bit compromised. The frame is a little too small to offer typing that doesn’t feel a bit cramped, and if productivity is your main aim, we’d suggest considering one of the great Windows-based alternatives such as the Asus T100 or T200.

The closer we get to comparing the Asus Transformer Pad TF103 with a pure Android tablet, the more we find its screen and design quibbles grating. However, if you need an extra device for both work and play for those moments when you’re on a train half-way between point A and B, this remains a top pick, especially if you’re keen on using Android, rather than Windows.

Now that it’s down to £180 its value is simply excellent, making us care a lot less about its various issues.

Dated in parts and compromised in others, the Asus Transformer Pad TF103 nevertheless still offers a good budget hybrid option for occasional, rather than everyday, users.