Given the Asus AC68U’s vast array of features and functionality Asus must be applauded for the ease of its setup. Like the best modern routers it is now CD-less and a user simply connects to either of the router’s initially security-free wireless 2.4GHz and 5GHz SSIDs and they are immediately guided through a browser-based setup wizard.

The wizard immediately prompts you to set admin and wireless passwords, detects your Internet connection (or lets you enter wireless settings manually) and you’re away. One area that hasn’t changed since the AC66U is the settings UI, but there is little need as it remains one of the most intuitive on the market.

In fact, the only complaint we have is Asus’ AiCloud still doesn’t let you remotely access these settings like Linksys’ Smart WiFi. This is great for parents who want to tweak parental controls when out the house or offer remote technical support. Fingers crossed Asus will address this one omission before too long. 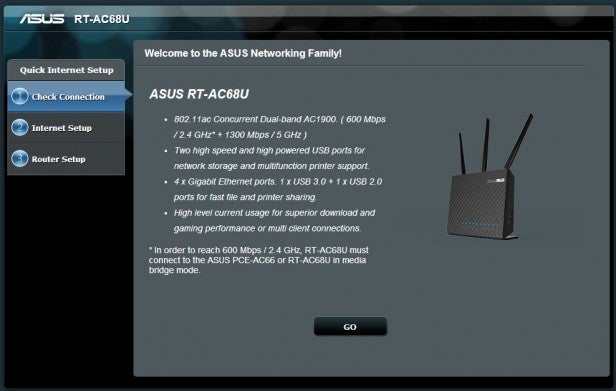 Both in looks and on paper the AC68U appears to be in a class of its own and we’re happy to say that is how it turned out in testing. 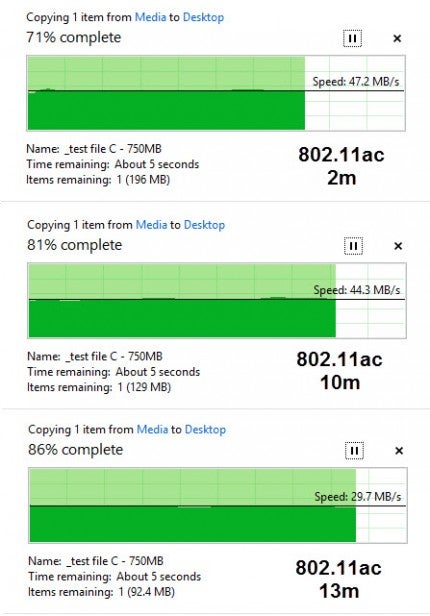 In fact, the Asus AC68U was so fast we actually hit bottlenecks in our NAS and wireless adaptors for the first time. Subsequently we upgraded our test equipment to a premium, as-yet-unannounced Synology NAS (which we will also be reviewing soon) with Western Digital Red label NAS-specific hard drives and an Asus PCE-AC68 AC1900 PCI Express wireless ac adaptor.

Critically, the bottlenecks occurred at 42MBps something no other router has reached. We went back and retested the fastest routers we’ve seen to date (the Linksys EA6700, Asus RT-AC66U and D-Link DIR-868L) and their results were unaffected. So on with the scores. 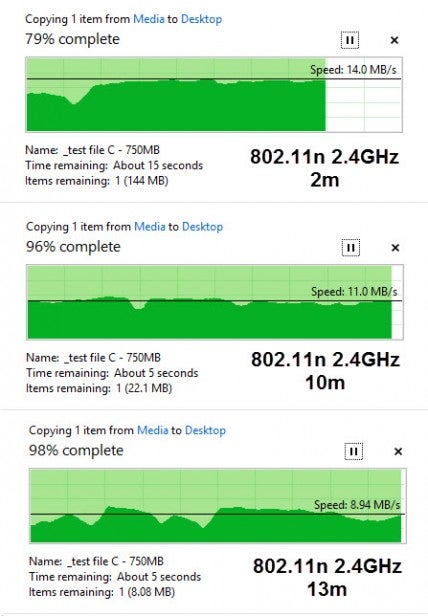 Interestingly these figures are proportionately in line with the boost from 450-600Mbit. Not wanting to leave out the multitude on devices sans-TurboQAM we also ran these speeds through a desktop replacement Sony F Series laptop. Happily is did benefit and speeds at all three distances remained faster than anything we’d seen before. 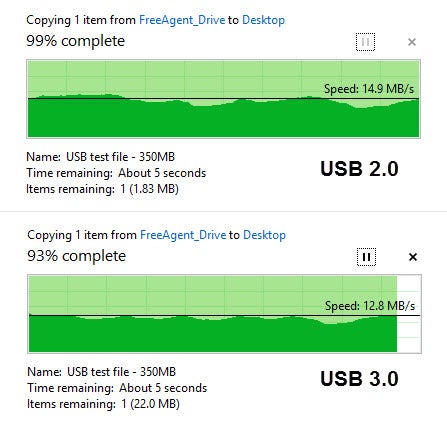 Finally we come to USB performance. Again this interests us more than usual as we have ranted about underpowered router hardware sabotaging these speeds for years. This line of argument is vindicated by the AC68U as it produced speeds of 14.9MB/s (119.2Mb/s) and 12.8MB/s (102.4Mb/s) from its USB 2.0 and USB 3.0 ports respectively – nearly triple what we usually experience.

And yes you read that right, USB 2.0 performance edged USB 3.0. This shouldn’t be too surprising since neither speed challenges USB 2.0’s performance limits and goes to show the inclusion of USB 3.0 at this stage is really more of an advertising gimmick than something crucial for hitting new speeds. Perhaps this will change if routers begin a CPU spec war. 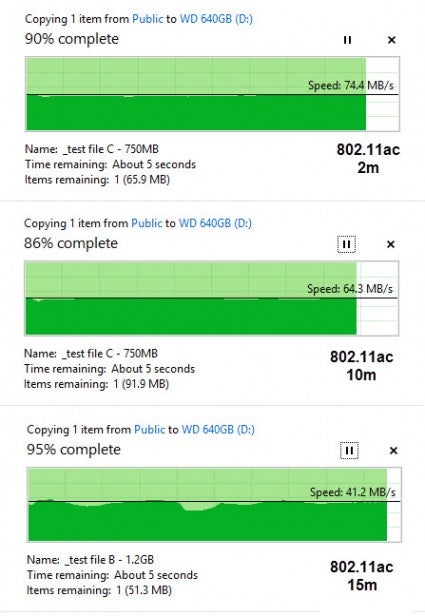 Update 03.12.13 – the RT-AC68U and the PCE-AC68 have both received significant firmware updates since these tests while we have also switched our default router testing NAS to the excellent WD MyCloud.

While there were no improvements to 802.11n performance after these changes, 802.11ac speeds leapt significantly. We recorded speeds of 74.4MBps (595.2Mbps), 64.3MBps (514Mbps) and 41.2MBps (329.6Mbps) at 2m, 10m and an increased final distance of 15m (behind two solid walls) which we will use for all testing from now on as wireless ac performance continues to skyrocket. Speed graphs opposite.

This superb scores won’t change the overall score of the RT-AC68U in light of the arrival of the Linksys EA6900, but both AC1900 routers now stand head and shoulders above the AC1750 products which saw no increases under our new test setup. We now await the UK release of Netgear’s debut AC1900 router, the R7000 ‘Nighthawk’, with baited breath.