The Asus ROG Strix Scope RX is a high-quality and relatively affordable gaming keyboard, but it's light on features when compared to rivals.

The Asus ROG Strix Scope RX is one of the latest keyboards to go beyond mechanical hardware by deploying lasers to deliver increased speed – and the Scope uses Asus’ debut optical switch.

Costing £125 in the UK and $129 in the US, it’s one of the cheapest opto-mechanical keyboards around – models from Razer and Corsair cost far more.

The questions, then, are clear: can the Asus ROG Strix Scope RX deliver opto-mechanical quality for a lower price, or has too much been compromised as a result of the budget?

There’s a lot of logic behind the opto-mechanical technology that’s now being used inside some of the best gaming keyboards. While the Asus’ keys do still look like mechanical buttons, on the inside their metal contact plates have been replaced by beams of infrared light.

Conventional mechanical devices use that metal contact plate to complete a circuit and therefore register a keypress when the buttons are pressed. However, opto-mechanical hardware registers a keypress when the button presses down and interrupts the laser beam. The move to lasers delivers a significant increase to keypress speed, which is important when playing fast-paced games. 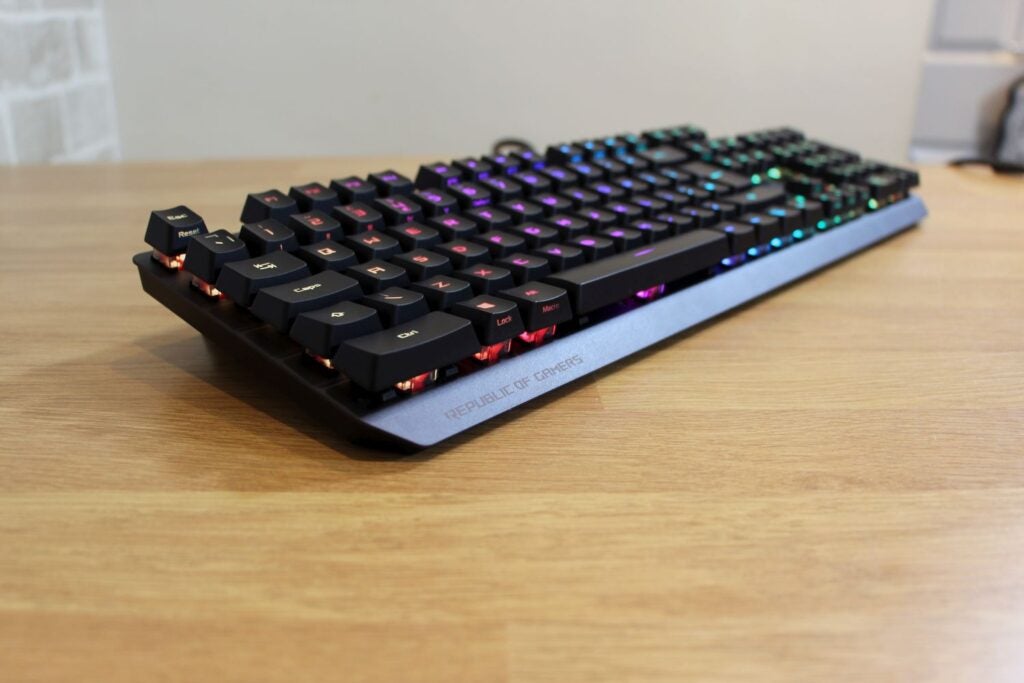 Elsewhere, Asus has also included a new key design on the Scope RX. The firm says its keycaps are mounted on a wider base than on previous keyboards, and that they use a firmer scissor-style framework that’s been designed to improve consistency and strength. Asus has also used a soft-touch coating on the buttons to improve grip.

The Scope’s buttons sit above a smart aluminium alloy plate. I think the metal looks great thanks to its brushed finish, and the elevated keys mean their individual RGB LEDs glow pleasingly. The aluminium sits on top of a plastic base, but I have no qualms about the Scope’s build quality – the unit feels rock-solid, and its IP56 rating means it’s waterproof and protected from dust ingress. It’s a full-size unit with a numberpad, which arguably makes it more versatile than the last Asus ROG unit, the Scope TKL Deluxe.

This Scope’s body barely extends beyond the keys, which means its width of 440mm is modest for a full-size keyboard and its weight of 1.07kg is entirely reasonable. You’ll only likely get a decent keyboard with less size and weight if you opt for a TKL, or a 60% model. 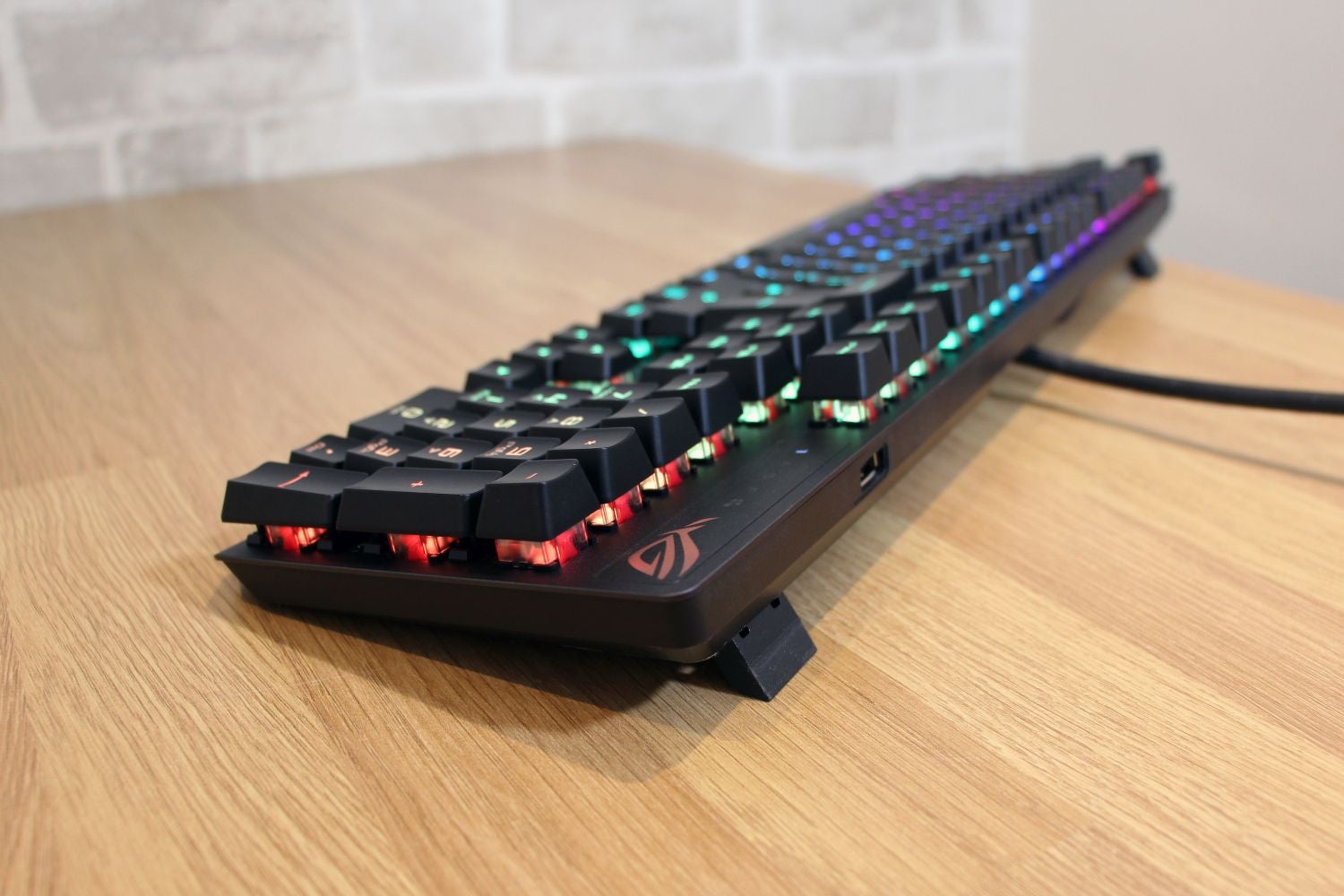 The Asus has per-key RGB LED backlighting, with lights delivering bright, crisp and consistent illumination. They can be configured using the Asus Armory Crate app; it’s a decent bit of software which supports the key lighting effects for the keyboard’s RGB LEDs and can synchronise the lights across other Asus hardware.

Design-wise, the Scope’s focus is gaming – and, as the name suggests, this keyboard pays particular attention to FPS players. There’s full NKRO and anti-ghosting to avoid issues during frantic, fast-paced sessions, and the CTRL key has been extended to make it easier to reach. The Scope has a Stealth shortcut that can instantly minimise apps and mute audio, and there’s enough memory on the unit to store five different usage profiles. There’s a USB port, but it uses the slower USB 2.0 protocol. 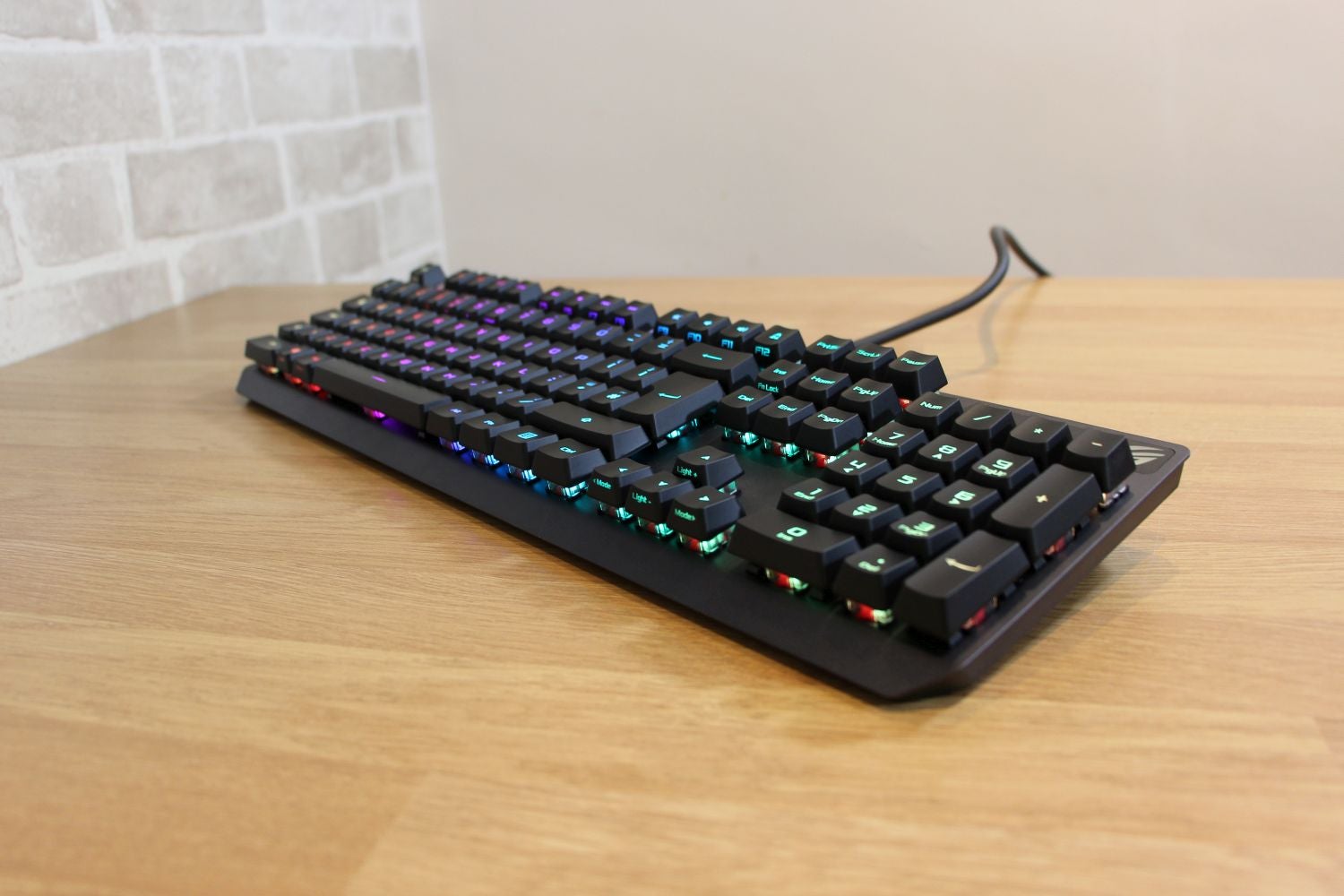 The relatively low price does mean the Asus is missing numerous common features. There are no media or macro keys; media options are relegated to the function row. There’s no wrist-rest either, and no alternate keycaps. I’d expect a FPS-focused keyboard to cater to people who frequently travel to gaming events, but there’s no travel sleeve and the 1.8m cable isn’t detachable.

There are certainly plenty of missing features, but that’s the price to be paid for including optical technology at £125/$129. If you want media features, a wrist-rest and macro keys, you’ll have to pay this sort of cash and be satisfied with normal mechanical keys – or spend more on a pricier opto-mechanical unit, such as the Corsair K100.

The Scope uses Asus’ first opto-mechanical design, and the ROG RX Red switches inside this keyboard offer an impressive array of specifications. They use a linear design, which means they push down smoothly without the tactile bump found on many traditional gaming keyboards, and feature a 1.5mm actuation point alongside a 4mm travel distance. They require an initial 40g of force to register a keypress.

These figures compare well to the wider market. The initial actuation force of 40g is a little lower than the vast majority of optical and mechanical keyboards, but the Scope’s actuation point and travel distance figures are more in line with conventional mechanical units – pricier optical devices such as the Corsair K100 and Razer Huntsman Elite require less movement to actuate. 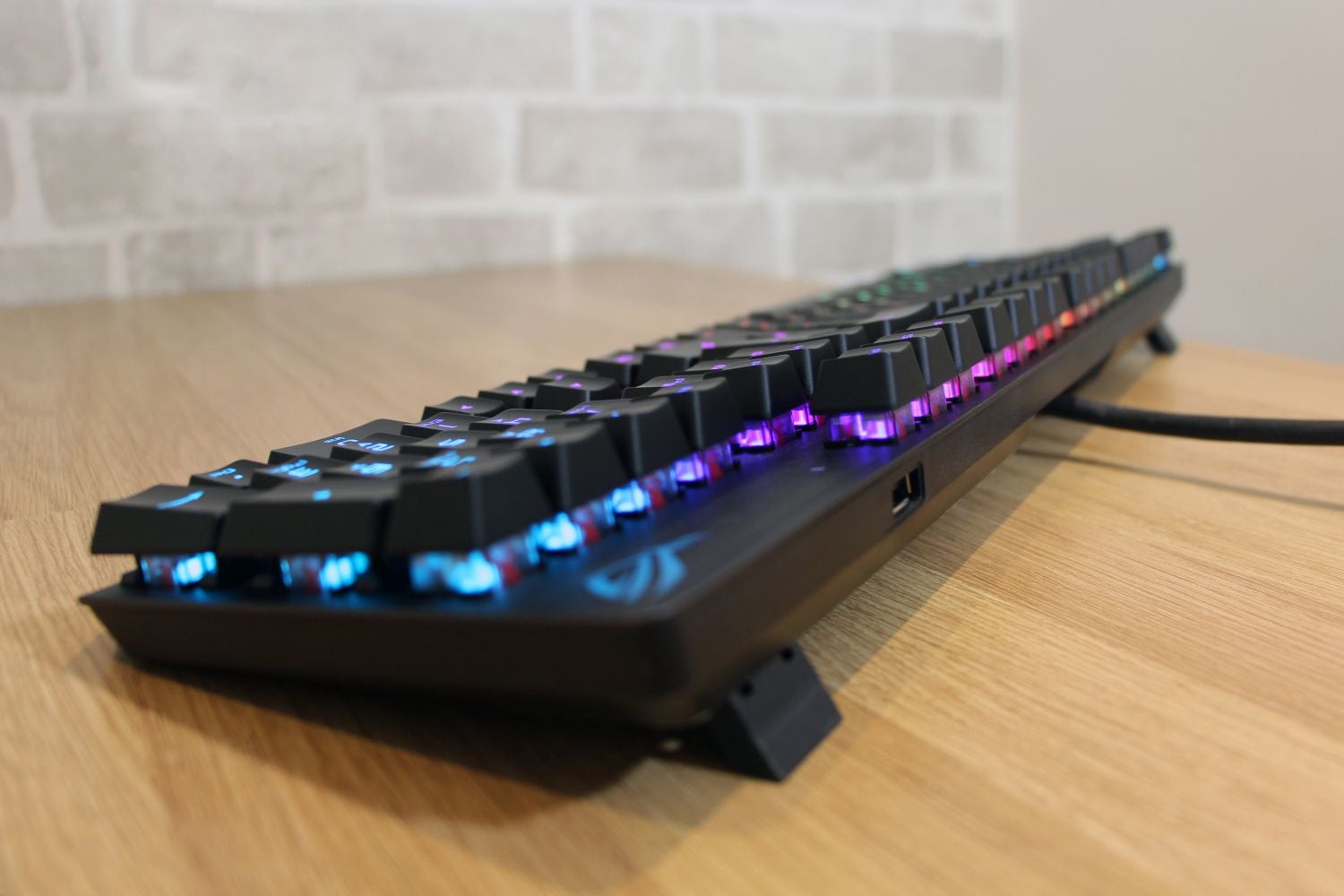 The combination of optical speed and conventional travel distances makes for an impressive keyboard. The laser technology and the light actuation force mean the Scope is incredibly fast – the buttons register almost instantaneously when I push down. The higher actuation point, longer travel distance and the revised, firmer key construction means the buttons still feel solid, despite the speed, and they have more heft than the lighter keys on most optical units. It’s a superb middle-ground.

This great balance should sate traditional gamers, although opto-mechanical units do always come with a caveat: while these keys are undoubtedly faster than conventional mechanical units, the margins are slim, and you’ll only really benefit if you’re a keen competitive gamer.

Should you buy the Asus ROG Strix Scope RX?

The Asus ROG Strix Scope RX delivers an impressive typing experience: the optical hardware serves up fantastic speed that will sate keen eSports and FPS players, and the robust, tall buttons deliver a heftier experience than most optical keyboards manage.

The buttons are fantastic, but optical units still only deliver a relatively modest gain over mechanical hardware, so only the most demanding gamers need apply. And while the Asus is cheaper than other optical units, it does miss out on plenty of features.

If you’d like a fast, satisfying gaming experience, and you’re not fussed about missing out on those features, then the Asus ROG Strix Scope RX is an excellent option. But be aware that you can find lighter buttons and more features elsewhere, especially if you’re willing to pay a little more.