The Corsair K100 wired gaming keyboard is tremendously designed and packed with features, with laser-powered switches delivering incredible speed and quality. But it’s expensive and overkill for all but the most demanding of gamers.

The Corsair K100 is the flagship wired keyboard from one of the world’s most prominent gaming hardware companies.

It comes packed with impressive technology, but it also arrives with a sky-high price of £229 in the UK and $229 in the US, making it one of the most expensive gaming keyboards around.

As such, the K100 will have to perform exceptionally well to justify such a high price, especially when the shelves are packed with rivals that offer similar hardware at lower prices.

The Corsair K100 isn’t’ the slimmest or lightest of keyboards. The full-size layout and extra features mean that it’s 470mm wide and 166mm deep, weighing in at 1.35kg. This isn’t surprising, nor is the fact that build quality is fantastic, but you will need plenty of space on your desk.

The Razer Huntsman Elite is the Corsair’s biggest rival. It’s cheaper than the K100, at £185 and $183, but that lower price does mean it misses out on features – it doesn’t have as many buttons as the K100; it doesn’t have macro keys; and it has fewer RGB LEDs.

In normal mechanical keyboards, keypresses are registered by the bottom of the key pressing a metal plate in the base of the keyboard; this connection completes a circuit, sending a signal to the computer. With opto-mechanical switches, such as the Corsair OPX, there’s no contact plate in the base. Instead, there’s a tiny red laser, and pressing the keys down makes a plunger interrupt the beam. That interruption is how a keypress is registered, and the process is far quicker than the metal contact system. 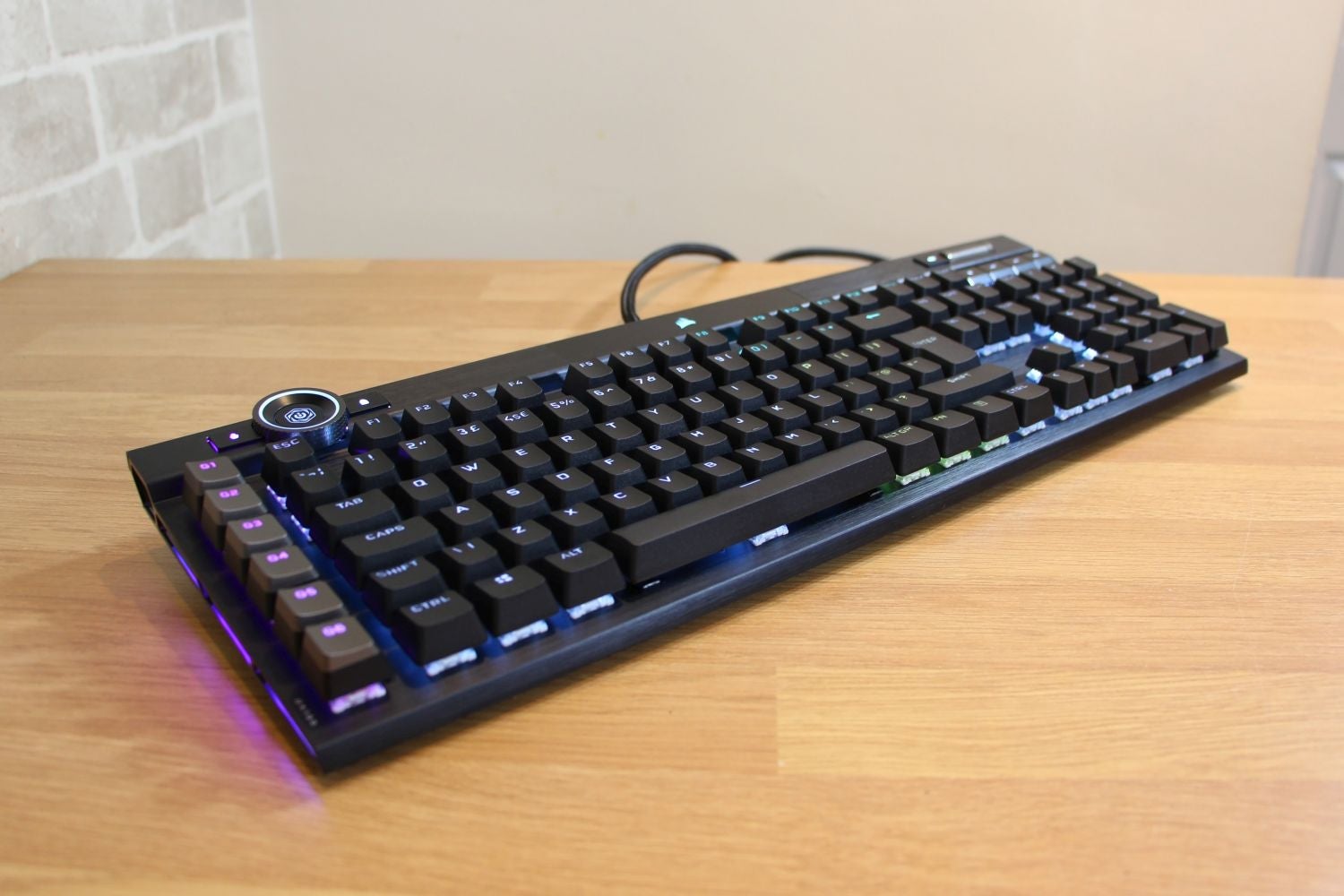 Speed isn’t the only claimed benefit. Fewer discreet parts results in improved reliability, plus you don’t suffer from debounce delay – the issue where mechanical keyboards wait for a short period before resetting because they don’t want to accidentally register a bouncing key as multiple keypresses.

The top-left area of the K100 keyboard has a large, textured wheel that can be used with eight different functions, from skipping music tracks and switching apps to scrolling web pages and altering your RGB LED brightness. The centre of the wheel is a conventional button, and buttons either side that enable me to quickly switch between profiles and activate Game mode. 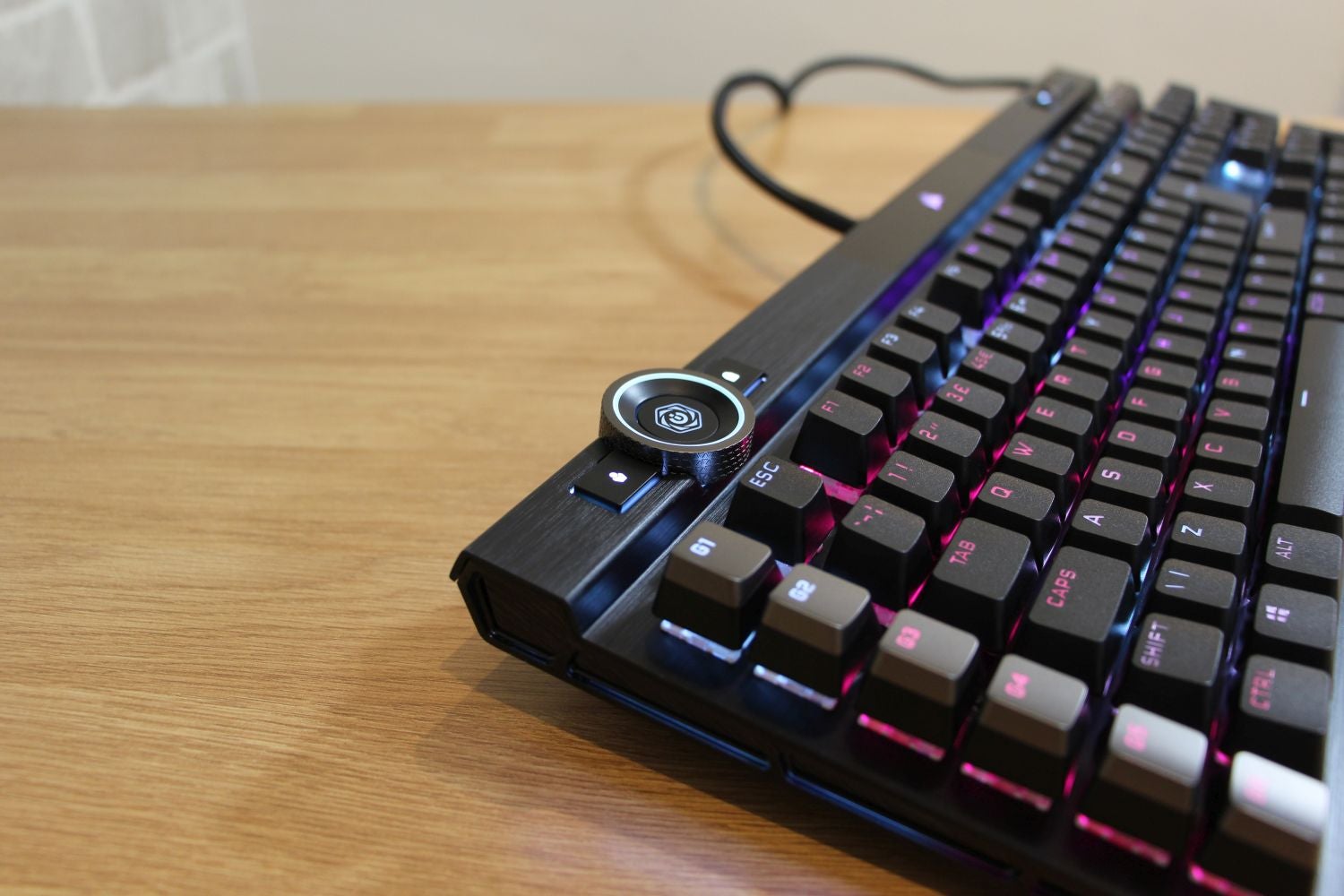 The left-hand side of the K100 boasts six macro keys that can also be configured alongside an Elgato streaming deck, and in the top-right corner the K100 serves up a volume roller and several media keys.

The bottom edge of the K100 can be bolstered by a comfortable magnetic wrist-rest, and Corsair includes a selection of replacement buttons – I found six in the box designed for MOBA gaming and four that are more suited to FPS titles.

The feature set is rounded out by ample RGB LED lighting. Each key has its own customisable LED, and the keyboard’s edges are also illuminated. I think the lighting is superb – clear and bright. The Corsair looks fantastic overall, with a brushed aluminium top-plate and keys that stand proud of the metal to let the lights glow.

The K100 uses an Arm processor that has multi-threading, and 8MB of on-board memory means that the K100 can have complex lighting effects and up to 200 profiles stored on the device. The CPU also means the K100 can use a 4000Hz polling rate, although it’s set to 1000Hz by default, which I found perfectly fine. This is another area where the Corsair is incredibly capable; but it will be overkill for most users. 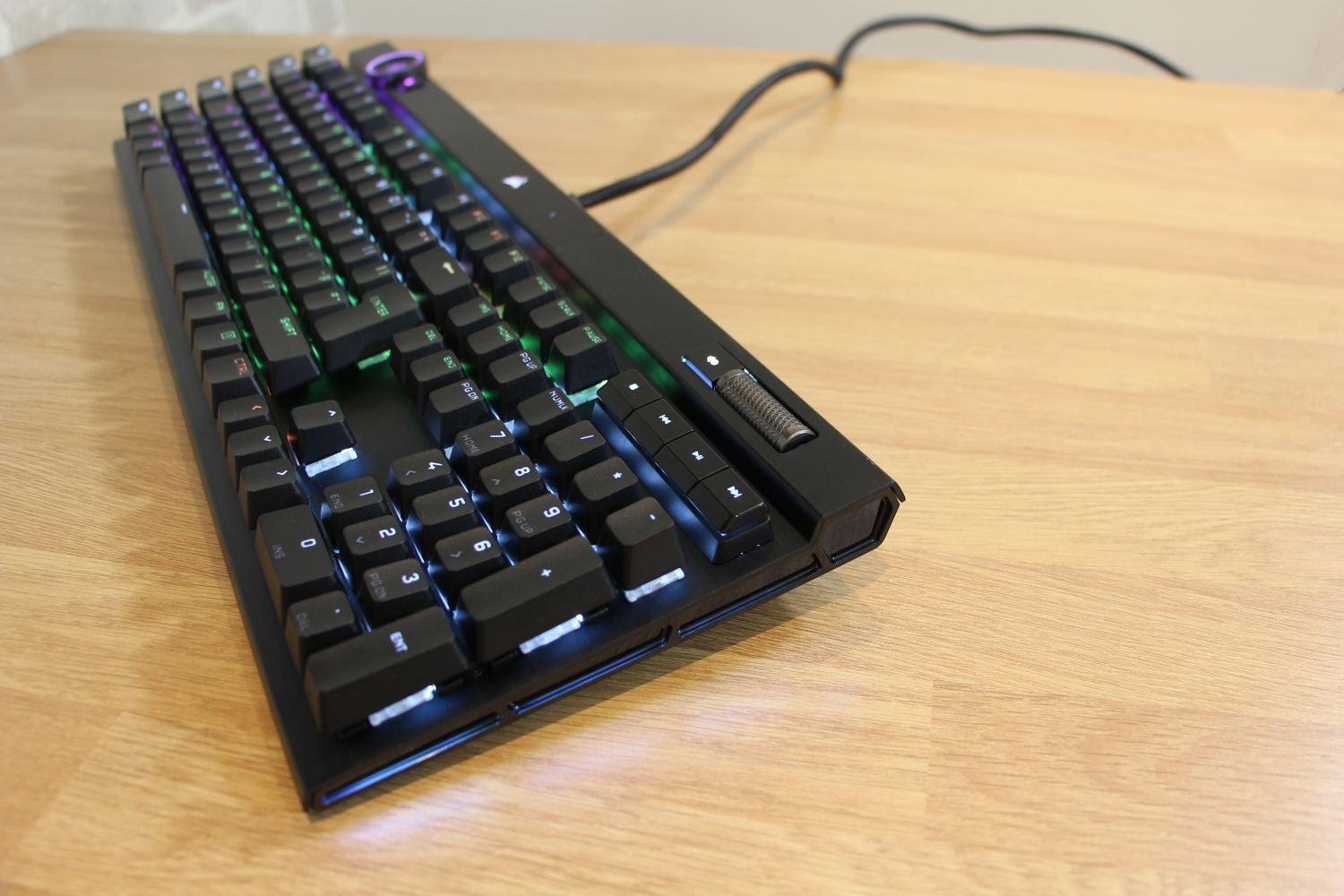 The Corsair’s features are managed using the familiar iCue app. It’s an excellent bit of software, with a huge range of options available. You can use dozens of lighting effects and stack them to create huge complexity, and it’s easy to create game profiles and to record macros.

Overall then, this keyboard’s feature set is impressive, but I do have some criticisms, even if they are only minor. While it’s great that media keys are included, they do feel a little flimsy. And while I appreciate this keyboard including a USB port, it uses the slower USB 2.0 standard. The Corsair also requires two USB ports on your PC to function, and there’s no audio passthrough.

The Corsair K100’s laser-based switches pair their impressive technology with a solid set of specifications. They have a 45g actuation force and 3.2mm of travel alongside a 1mm actuation point. The K100 also has full NKRO and anti-ghosting. The keys use a linear motion, which means that they press down smoothly, without the noticeable bump delivered by many other mechanical switches. Those travel, actuation and force figures are impressive when compared with conventional hardware.

The K100 is also manufactured with CherryMX Speed Silver switches, and those switches have a 1.2mm actuation point and 3.4mm of total travel alongside a 45g actuation force – so they require a little more movement to register a press compared to the Corsair OPX hardware. In addition, those Speed Silver switches are shallow when compared to most traditional mechanical switches – popular options such as CherryMX’s Red, Blue and Brown switches need more movement and force. 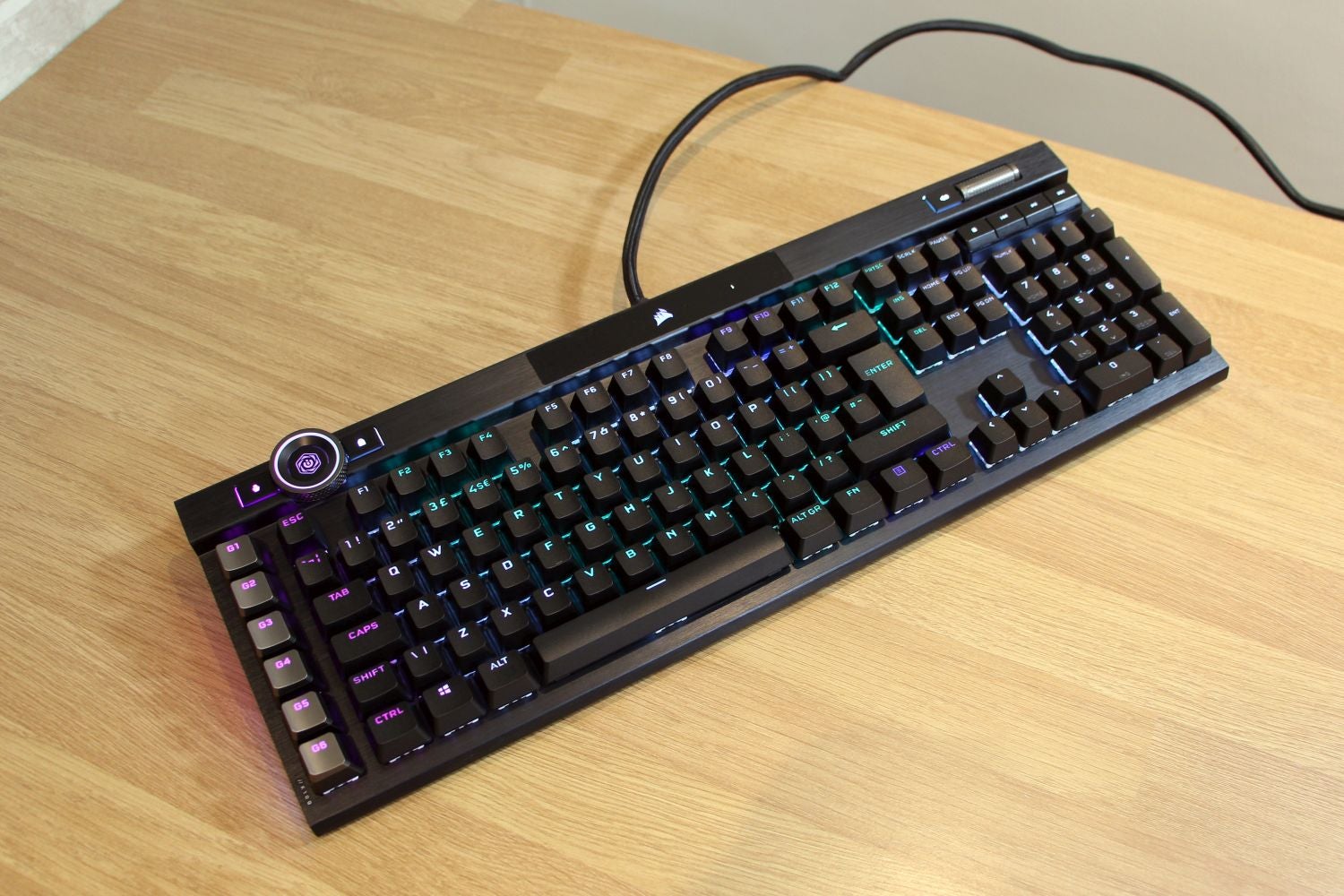 Corsair’s switches compare well to Razer’s opto-mechanical rival, too. The Huntsman Elite’s hardware has a 3.5mm travel distance and a 1.5mm actuation point, and they also use a tactile motion with a noticeable bump as you depress the keys.

On paper, the Corsair K100’s buttons are impressive, with the characteristics that should promote smooth, fast gameplay. And in use the buttons did just that when I hammered on them for gaming: they were incredibly fast and sensitive.

I barely have to push the switches for a keypress to register, and the buttons move quickly, consistently and comfortably. Their incredible pace is paired with a robust feel and a crisp snap when they bottom-out. They’re lightning-fast and excellent, and easily among the best gaming keyboard buttons I’ve ever used.

These buttons are smoother than those found on the Huntsman Elite, and those Razer buttons do feel a little heavier and more tactile thanks to their noticeable bump. There’s barely a noticeable difference between the two in terms of speed, however – it’s more about gamers picking the type of motion they prefer.

The Corsair K100 is a high-quality bit of kit that undoubtedly earns its flagship status. The laser-powered switches are brilliant – fast, smooth and light – and the K100 offers tremendous lighting, plenty of features and impressive build quality.

The biggest issue comes at the checkout: the Corsair is hugely expensive, and not everyone will benefit from the super-fast switches and ample features. Those not fussed by such high-end features will save plenty of money by opting for conventional hardware instead.

But if you’re a competitive gamer who wants every advantage possible, or a keen player who just wants the best gaming keyboard available, the Corsair K100 is right at the top of the heap.