The Asus Strix Scope TKL Deluxe is a marvellous option for those looking for a sleek and sturdy TKL board that features some brilliant key switches. First impressions last, and Asus’s decision to use Cherry MX switches and staple features such as a brushed aluminium top-plate mean there are few better wired gaming keyboards around.

Priced at £149.99, it’s certainly at the upper-end – although, it’s a reasonable sum given the combined pedigree of the ROG name and Cherry’s MX switches.

But is the Strix Scope TKL good enough to compete with offerings from the likes of Razer and Logitech?

For the Strix Scope TKL Deluxe, Asus opts for an open housing and brushed aluminium top-plate, resulting in a sleek, sturdy and classy-looking keyboard. It’s almost military-grade in its construction, which helps to justify its price.

The Strix Scope is pretty weighty for a TKL board at 860g. The wrist-rest adds a further 170gheft, bringing the total weight to just over 1kg – although it’s lighter than some rivals and most full-size boards. Thankfully, the TKL design helps to make the Strix Scope portable and rather easy to transport.

With its two-tone black and grey colouring, this keyboard looks aggressive and is likely to fit in well with the setup of avid gamers. It offers a clean finish, complete with a nicely placed Asus ROG logo in the top-right corner of the board. The lock-lights sit in a similar place to where you’d find them on Razer’s boards: in amongst the Navigation cluster, just above the arrow keys. 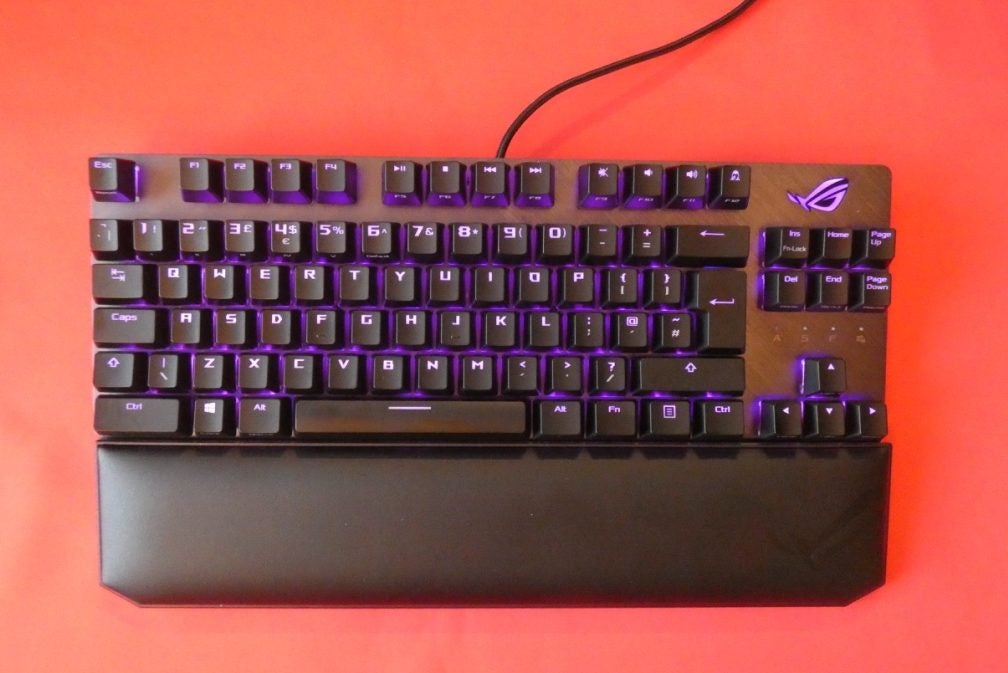 The keycaps are double-shot moulded with two pieces of plastic, which makes them especially hard-wearing. In addition, Asus uses its usual ROG typeface, further reinforcing the aggressive but sleek character.

Unfortunately, the Strix Scope doesn’t feature any additional macro keys, but this is admittedly rare for TKL boards as a result of their space-saving nature. However, some may argue they’re a must-have in the modern world. On the plus side, the keyboard includes some multimedia keys for use with the FN key activated, which is a nice touch.

The Deluxe model of the board even comes with an included magnetic wrist-rest. While this doesn’t offer the most secure attachment mechanic, it greatly aids in increasing comfort and ergonomics by raising your wrist upwards. Its inclusion undoubtedly places the Strix Scope TKL Deluxe as a premium product, which is reinforced through the inclusion of a 1.8m detachable USB-C to USB-A cable.

I’m not the biggest fan of MX Reds, but the Strix Scope TKL Deluxe is also available with Silent Reds, Blacks, Browns, Blues and Speed Silvers (all RGB variants) to cater for all typists regardless of their gaming needs. 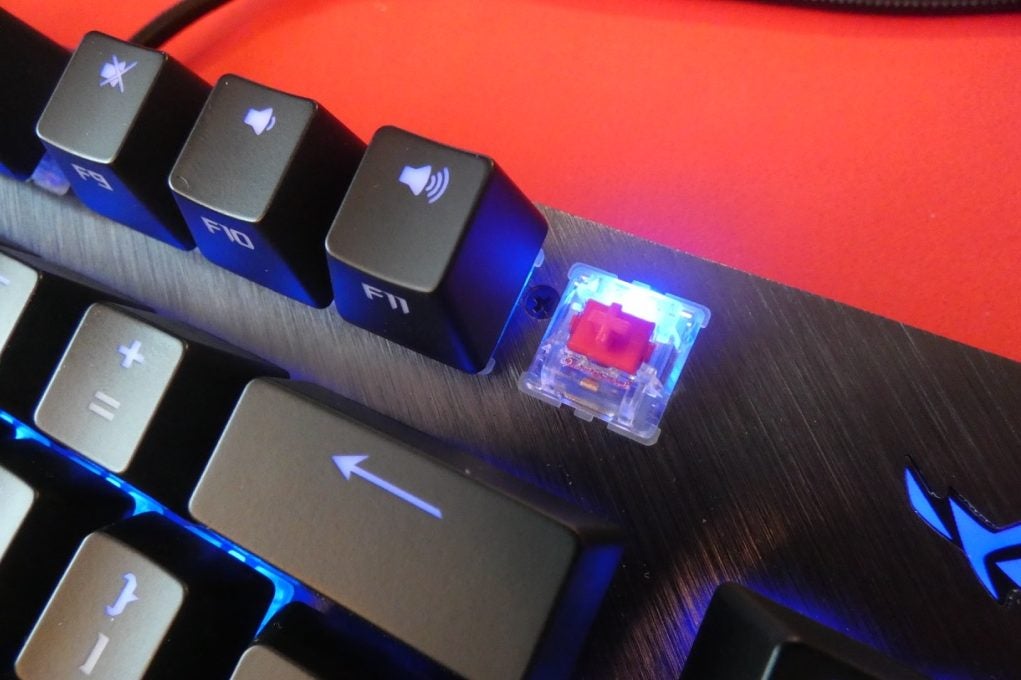 Full NKRO and anti-ghosting – staple features on gaming-orientated mechanical keyboards these days – are also included, helping to provide you with a competitive edge in high-intensity situations. The lighter key switches also help in this regard, and are greatly aided by the MX Speed Silver key switches. These feature a higher actuation point of 1.2mm compared to the normal 2mm, for faster keypresses and a pronounced competitive advantage.

For general day-to-day use, I found the Reds to be a little too light; however, for gaming they’re the best in the business. Asus’s decision to include a Win-key lock only raises its gaming pedigree, as does the Stealth mode to mute all notifications and audio to provide that little extra focus.

Out of the box, the Strix Scope TKL Deluxe features five lighting presets. These include a standard colour wave, along with Starry Night, Current, Rain Drop and Reactive. Lighting is triggered through individual key presses. It’s a decent variety of presets; it looks crisp with the MX RGB switches’ clear housing, and the additional software only impresses further. 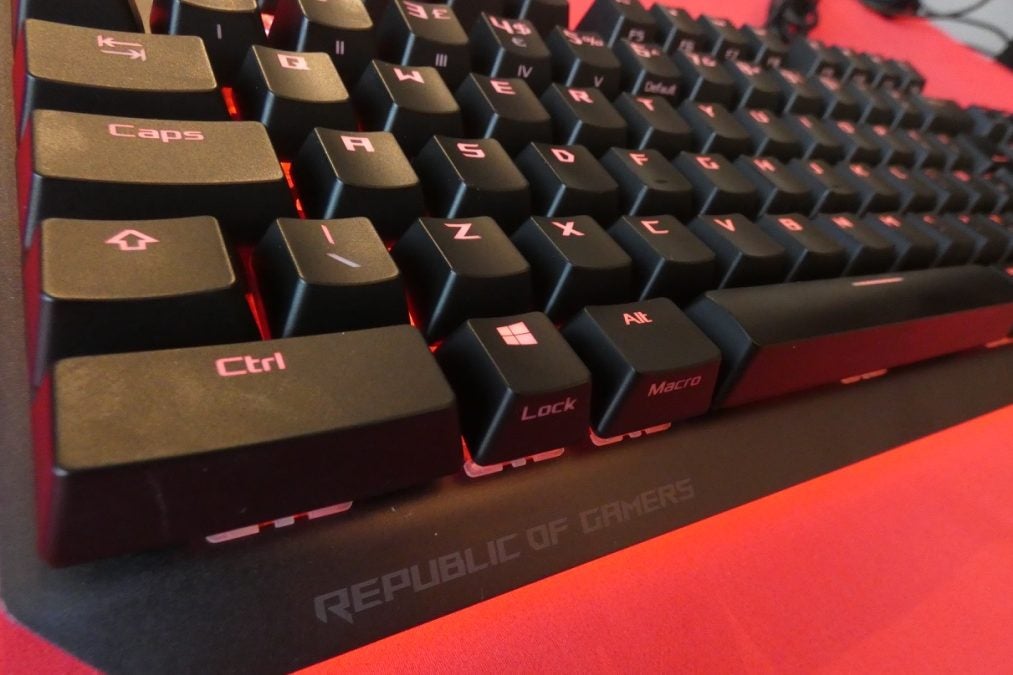 Despite being a hefty install, Asus’s Armoury software allows for a lot of programming ability when it comes to backlighting. It offers 10 different lighting presets, as well as the opportunity to create custom effects and choose different modes on each individual preset, which include single- and double-colour options, as well as infinitely random ones.

Without dedicated macro keys, the Strix Scope TKL Deluxe does fall down a little on the software side. It offers only limited capabilities to record macros and, unlike Razer’s Synapse 3 software, doesn’t allow you to devote any key to other functions

If you’re looking for a sleek and sturdy TKL keyboard that features some brilliant key switches then the Strix Scope TKL Deluxe is a marvellous option. Asus’s decision to opt for Cherry MX switches and staple features such as a brushed aluminium top-plate mean there are few better wired gaming keyboards on the market.

That being said, the lack of additional macro keys or dedicated multimedia keys may annoy some gaming keyboard purists. Plus, the skeleton design could result in light seepage, where close-housed competitors such as Logitech’s G PRO may have the edge, as well as being cheaper.

However, it’s looks where the Strix Scope TKL Deluxe wins, with rivals such as Corsair’s K65 LUX unable to keep up with the Strix Scope’s classy design. In addition, against some of Razer and Logitech’s efforts, the Strix Scope includes reputable key switches over the former’s clones, offering a more complete and trusted experience.