What is the Razer Huntsman Elite?

Razer is the gaming peripheral lifestyle brand. While most of the company’s devices can feel just the wrong side of edgy, I have a lot of love for the BlackWidow Chroma V2 sat on my desk – a solid keyboard that pairs functionality with style and decent build quality.

In 2014, Razer decided to create its own proprietary switches, instead of using the Cherry MX switches that are ubiquitous on modern keyboards. And now, Razer has upgraded these switches for a new series of keyboards – the Razer Huntsman – with laser beams to ensure smooth actuation and a more durable set of keys. They’re calling them opto-mechanical switches, and they’re rated for 100m keypresses.

We’re reviewing the Huntsman Elite, which costs £200. A non-elite version that skips the wrist-rest and the lights on the side of the keyboard can be had for £150.

The Huntsman Elite doesn’t take up a lot of space on the desk. Its small footprint is in part due to the lack of any dedicated macro keys, but also because each key stands up from a metal board that’s free of cladding.

This makes the board compact, but also means messy eaters can easily shake food crumbs or dust out of the board. The matte-black finish results in few fingerprints, and the feet on the bottom can be flipped out to two different positions, creating various options for typing.

Media controls on the side comprise three programmable keys and a wheel that can deliver a variety of functions. After trying a few functions mapped to it, I found that the original setup – with the dial controlling the volume, and a tap of the knob muting all sound – worked well for me.

The keyboard’s lighting is a step up from previous Chroma efforts, with a light bar that runs around the unit and bundled wrist-rest providing underglow lighting. Aesthetically, it’s pleasing, especially when you play a game that has support for the Chroma lighting sync software. 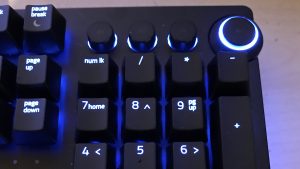 The soft leather wrist-rest is the best I’ve used, making both typing and long gaming sessions comfortable. It does increase the size of the keyboard somewhat, but it’s easy to detach if you’d rather use a rest of your own. The full keyboard, with wrist-rest, remains smaller than the BlackWidow Chroma V2, as does its profile.

However, there’s a cost. Power for the wrist-rest through a contact port means the Huntsman requires two separate USB ports, and there’s no USB passthrough, which is a real misstep on a keyboard at this price. Similarly, audio passthrough is missing, and the removal of the macro keys means no macros aside from the reprogrammable media controls, which are located at the top-right of the keyboard and aren’t convenient for use while playing or typing.

What’s here is genuinely great, but these omissions are glaring for a premium keyboard with a £200 price tag, and while it’s an exceptionally designed keyboard, the missing features could be a deal-breaker for some. 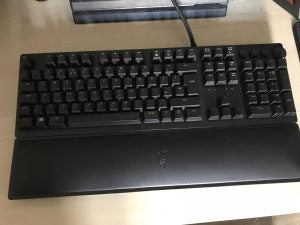 I’ll admit I rolled my eyes at the concept of using a beam of light for actuation, but the keyboard is pleasingly clicky, with a feel close to MX Cherry Blue switches – although with a lighter keypress that means I didn’t feel so fatigued.

Actuation is near-instant, and there’s a noticeable difference when playing games such as PlayerUnknown’s Battlegrounds, Doom and Rainbow Six Siege, where the faster actuation makes your movements a tiny bit quicker. This was particularly noticeable when trying to lean around corner for quick peeks or vault through a window because a nasty person across the valley was trying to shoot me.

Typing on the keyboard feels solid: keys move fluidly and bounce back quickly with decent travel. At first, the keys felt a little ‘squishy’, but I soon adjusted and found that I could type quickly and accurately. The ‘clicky’ feedback is actually separate from the key press, meaning the reset distance is short, so rapid keypresses aren’t a problem.

The keyboard is somewhat loud – a housemate in an adjacent room commented on the noise of the keyboard – but this is to be expected from mechanical keyboards. Just note that with the click-clack of keypresses and flashes of vivid lighting you might be unpopular bringing this unit into an office. 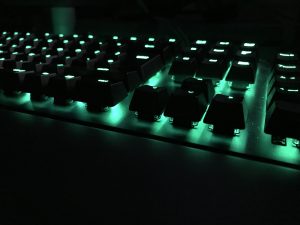 Razer’s Synapse software is still pretty decent, although it’s becoming bloated with each additional peripheral that Razer adds. Keys can be reprogrammed, lighting schemes adjusted and synced with Philips Hue light bulbs or a Razer mouse, if you’re using either of these. However, you need to create an account with Razer to take advantage of the software, which is annoying. 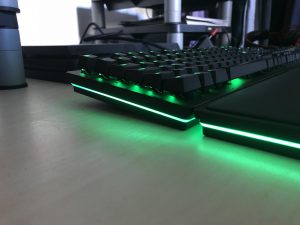 Why buy the Razer Huntsman Elite?

This is one of the strongest gaming keyboards I’ve used, and it’s the best unit that Razer offers. If you’re after a no-nonsense keyboard that performs well in a range of situations, and you’re not concerned about the extra USB port and lack of passthrough capabilities and macro keys, then there’s no reason not to buy the Huntsman Elite – other than price, of course.

Can you get a keyboard that does similar for less? Sure – but Razer’s Huntsman is a confident and well-designed peripheral that offers a premium experience and a few pleasing technological innovations.

The Razer Huntsman Elite nails the core keyboard experience, making typing and gaming a joy. And it has flashy lights. Style costs, however – this isn’t cheap.