Pairing the GTX 1060 with a Full HD screen is a sensible choice that leads to balanced performance. At this resolution, the Asus had no trouble with modern games, with averages beyond 60fps in Middle-earth: Shadow of Mordor, Dirt Rally and GTA V.

That’s an important marker, because the screen runs G-Sync at a maximum refresh rate of 60Hz – so if a game can run at 60fps, you’re going to get the absolute best out of Nvidia’s game-smoothing technology. 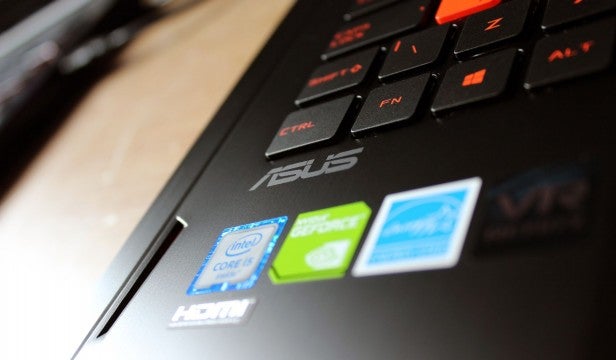 Only the toughest challenges push this GPU to the limit. I loaded Deus Ex: Mankind Divided, which is one of the most demanding games around, and the Asus averaged 37fps with a minimum frame rate of 29fps. That’s fine, but it means that this GPU doesn’t have as much headroom to cope with the demanding games that will emerge in a few years’ time. You’ll either have to drop the graphical settings or maybe switch to a lower resolution. For the the next couple of years, though, you’ll be fine.

If you’re going to be using a 1440p monitor, some games will require some settings tweaking for smooth 60fps gameplay, and VR titles might also need a bit of fiddling. But the GTX 1060 is certified as fast enough for VR and if you have a headset, you should get reasonably good performance.

The processor is a decent mid-range part. Its Geekbench single- and multi-core results of 3,036 and 9,271 mean games will never be bottlenecked, but the latter score is significantly quicker with a Core i7, because Hyper-Threading makes a huge difference to multi-tasking. 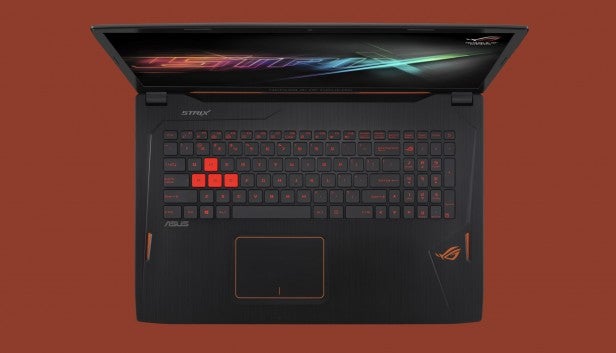 The final key component, the SSD, is similarly mid-range. Its sequential read and write speeds of 514MB/sec and 478MB/sec are fine, and quicker than any hard disk, but they’re reigned in by the upper limits of the SATA interface. Any laptop with an NVMe M.2 or PCIe SSD will have much quicker loading and boot times.

The mid-range components are fine when it comes to playing games and handling work on this machine’s 1080p screen, and they also contributed to reasonable thermal results.

The Asus is impressively quiet. When it’s idling the fans can barely be heard, and this laptop isn’t much louder when it’s pelting through games. It’s noticeable, but it’s far quieter than the vast majority of gaming notebooks – so, for me, that’s a success.

The CPU and GPU’s peak temperatures of 90°C and 86°C are a little higher than I’d expect from this class of laptop, but they’re not dangerous. Barely any of that heat made it to the outside of the chassis, which is good – the keyboard and base became only slightly warm, with most of the heat vented from the rear.

The 17.3in screen has a 1,920 x 1,080 resolution. That’s broadly fine for gaming, movies and work, but its density level of 127ppi is low when compared to higher-end laptops. 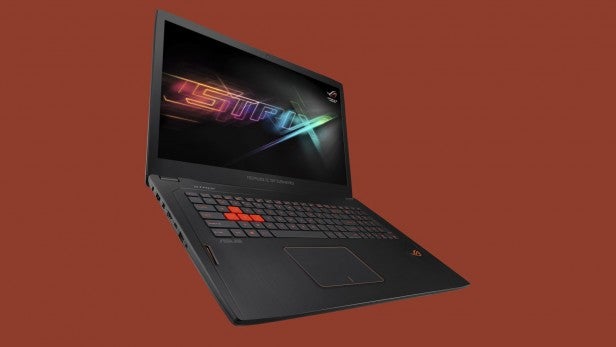 A higher resolution and density will give more screen real estate and sharper, more precise images and games. This isn’t essential, but it’s a good bonus if you have the extra cash.

The Asus is better in other areas. It has 60Hz Nvidia G-Sync, which is entirely standard – even on most more expensive gaming laptops – and it has a matte finish.

The Asus is reasonable in benchmarks, but it never gets beyond that level. Its contrast level of 900:1 is decent, and enough to provide vivid colours and a fair bit of punch when combined with the screen’s 0.35-nit black level.

A Delta E of 3.43 is entirely average, and its colour temperature of 7,610K is too cool – it makes colours look a little pallid. That latter figure remained steady when I switched to the laptop’s Vivid mode, but the Delta E did improve to 0.91 – a great result. That Vivid option is what I’d use day-to-day.

Uniformity is a little better, with a swing of around 10% between the furthest edges. That’s on a par with gaming laptops that cost twice as much, so it does mean that consistency is good on the Asus. 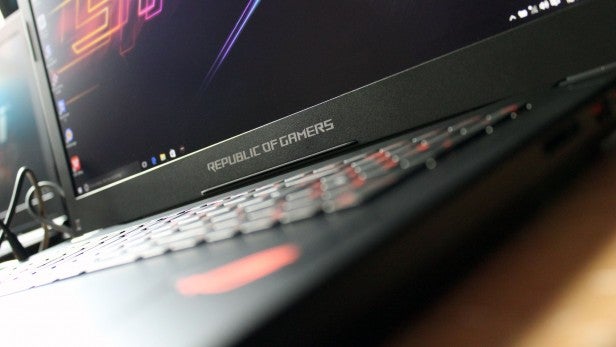 The 1080p resolution, inclusion of G-Sync and broadly decent benchmark results give the Asus a good bill of health: this screen has ample quality for gaming and watching movies. However, if screen quality is important then it’s worth saving up to acquire a panel with a higher resolution and more accurate colours.

The XMG with a more affordable specification would fit the bill, thanks to its better contrast and colour accuracy – despite that machine’s smaller 15.6-inch panel.

The Strix’s audio gear is controlled by an app called AudioWizard, but it can’t quite work magic on this laptop’s two speakers. The default mode is called Soundscape, and it provides reasonable high-end noise and treble punch – but with underwhelming bass. The Battlefield and War Room options are far too bassy to the detriment of the rest of the range, while the Multimedia option is too quiet.

The Action option is best: it drops the volume a little but provides decent balance, with a little more bass than the Soundscape mode.

Despite that, Strix’s speakers never ascend beyond just decent – the highest tones are still a little tinny compared to the best laptop speakers, and those machines have subwoofers too.

The lesser GPU and Core i5 processor do bode well for longevity, but the Strix’s 76Wh power pack isn’t huge – many other gaming laptops with more powerful components have larger batteries.

That means the Asus’ battery life is entirely ordinary. In the low-intensity Powermark test it lasted for 3hrs 42mins, which is a little on the low side. In a gaming test with the screen at full brightness it managed 1hr 10mins – perhaps a tiny bit longer than many gaming laptops, but not enough of a lead to make a difference.

The message remains the same as it does with all gaming notebooks: don’t go too far from a plug socket.

Should I Buy the Asus ROG Strix GL702VM?

The latest Asus laptop undercuts many of its rivals at the checkout and still manages to deliver a high-quality gaming experience.

The GTX 1060 is the ideal partner for the decent 1080p screen, and the speakers, physical design and ergonomics are all decent. 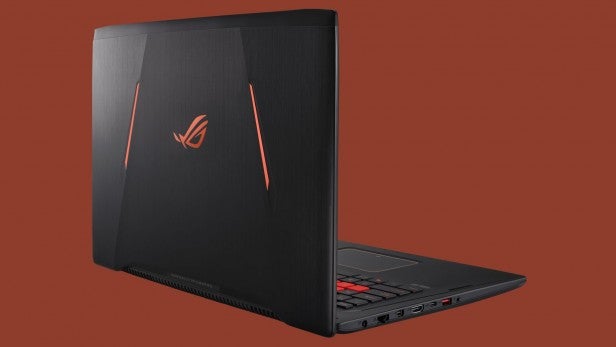 However, the lower price does inevitably result in a few drawbacks. The laptop doesn’t have the power to output to a higher resolution or a VR headset, and the lesser components mean less future-proofing. Build quality is also slightly wanting for a machine costing this much.

Other gaming laptops are faster and sleeker – but they’re also more expensive. This is a superb choice for solid gaming pace that won’t break the bank.

There’s little headroom for VR and future-proofing, it’s ergonomically middling, and it doesn’t have the features or power of pricier rivals. That said, the GTX 1060, solid Full HD screen and decent components elsewhere mean the GL702VM is an excellent and affordable gaming laptop.