Deus Ex: Mankind Divided had the potential to be one of 2016’s greats, to stand out from an already packed crowd and be amazing. After playing the opening chapter at preview I was frothing at the mouth with anticipation, excited by all the themes it presented and the plot it could deliver. However, despite moments of brilliance, Mankind Divided fails to live up to its opening promise.

In my preview, I talked about how well Mankind Divided presented its key themes within the opening chapter. The mechanical apartheid – where augmented humans have become a subclass of civilisation, bringing a society already tense after ‘The Incident’ to the brink of civil war – seeps into every interaction. It’s tantalising. My opening hours are spent exploring every side mission I can find. 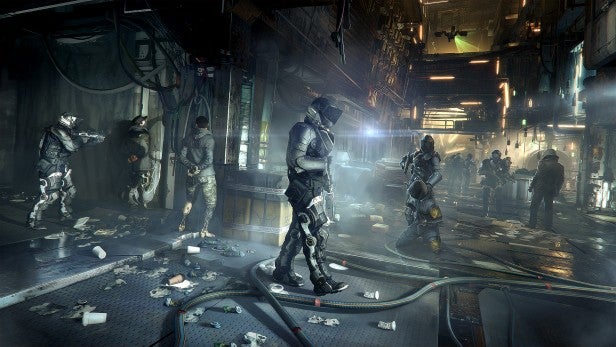 With supplementary stories as detailed and enjoyable as the main campaign, my opening run through Prague and Golem was exhilarating. I’m discovering how well thought out and structured the entire hub world is, working my way from story to story, playing detective and making incredibly grey moral choices. My only complaint is that Prague is, at times, too immersive for its own good.

Side missions are only discovered by speaking to people, ones with tasks to give differentiated by actually having a name – the rest are defined as “citizen” or by another synonym. However, unless you run up to every person, taking names, side missions can fall by the wayside despite every intention to see them all.

Each side mission in the game is numbered: SM01, SM02 and so on. When they jump from SM03 to SM07, I’m left with a disappointment, wondering how I missed missions 4-6. I wish quest-givers were more obvious to find, as I’m having fun in everything I do.

It helps that each person you speak to delivers dialogue in such a passionate fashion that you want to engage in their stories. Coupled with Deus Ex’s constantly-grey morality, knowing that you hold in your hands these people’s futures, interactions, especially ones where you use Adam’s social tools to try and get a read on their emotions, are incredibly engaging.

Unfortunately, beyond the first chapter, what started as a slow and considered development of an intriguing story becomes a clumsy and hurried sprint to an unnatural finish. 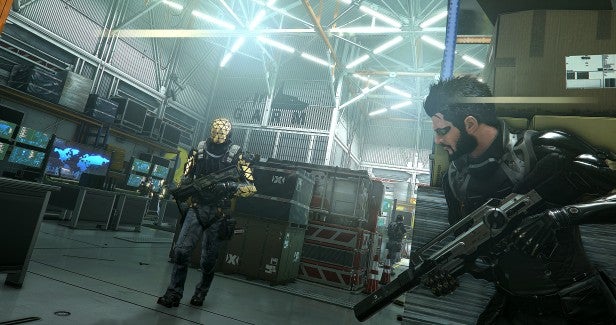 After you head out of Prague, and into the other locations in Mankind Divided, everything feels hurried. Characters are introduced then fall by the wayside, only to return at the crux of the story as a crucial figure with very little justification. Others make bizarre moral choices which feel completely unjustified, primarily because their morals and motivations aren’t adequately explored.

The story continues to build in a clumsy fashion right up until the end, which is so abrupt that I hurled a barrage of swears at the screen. The game essentially ends halfway through the second act. Imagine The Dark Knight (spoilers) rolling its credits after Batman rescues Harvey Dent from The Joker – that’s basically where Mankind Divided decides to bring down the curtain. Also, Eidos answers the leftover questions in the cheapest way possible: via a boring news video clip in a closing cutscene. It’s shockingly bad.

Mankind Divided is also surprisingly short. I was expecting the whole experience to last well over 40 hours, but was done in under 20, including doing every side mission I could find.

It’s a shame the story is such a disappointment, because when Mankind Divided shines, it’s incredible. The game is truly at its best when neck-deep in espionage, with Jensen infiltrating his way into the heart of enemy territory.

At one point I had to sneak into a large industrial estate. The myriad ways I could manoeuvre around the building – all dictated by which augs I had chosen to pimp Adam with – was astounding.

Hacking wall terminals, crawling through vents and stealthily (and non-lethally) taking out enemies along the way to my target is Deus Ex at its best. It’s something which was great in Human Revolution and continues to be great here. 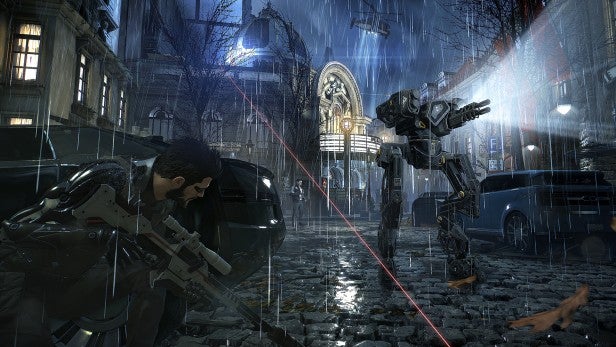 Switching in-and-out of Adam’s cloaked mode to move from cover-to-cover, jumping through windows and crawling inches away from agents who, should they spot me, will bring the entirety of my run through this enormous complex to an abrupt and explosive halt. There is a tangible tension to every movement I make, and it’s thoroughly enjoyable.

However, Deus Ex’s combat continues to lag behind in terms of quality for a number of reasons. Firstly movement can at times be clunky and uncoordinated. Moving Adam around the world feels like you’re controlling something that is ‘almost’ human. Failing to grab onto ledges, random jumps which fail, and having to crouch before jumping into small crevices in order to stop him leaping right and giving enemies an eyeful. It’s all very messy.

Once the fireworks begin, you’ll feel like it’s 2011 all over again, as Mankind Divided’s shooting sections are also plagued by the same issues as its predecessor. While there have been some improvements, it simply can’t offer a shooting experience on par with its stealth. You’ll find yourself the victim of frustrating deaths as enemies overwhelm you, kamikaze-running toward your position. The aggressive AI simply brings to light the fact that Jensen lacks the speed and fluidity to either take out his opponents or flee from them and take minimal damage on the way.

Also, they’re laser-accurate. Popping out from cover to get some shots off will almost certainly result in a significant amount of damage being taken. Unless you have the Titan aug or unlocked other defensive ones, it’s grossly unfair. If you’ve been building a particular, non-violent type of Jensen up to this point, you’re toast when the game thrusts conflict upon you.

While the cover mechanic is great, with the simple press of a button allowing Adam to seamlessly move from point to point, much like in Ubisoft’s The Division, it still isn’t enough to keep you out of trouble. 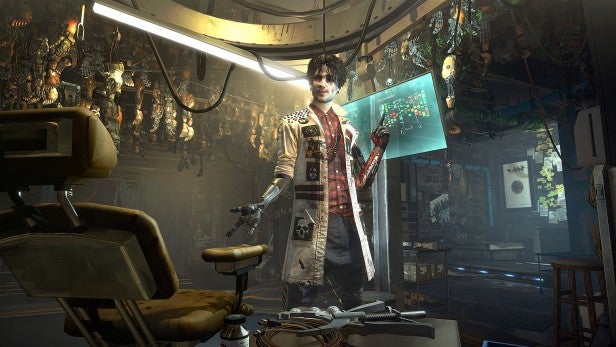 Breach, the game’s additional mode which sees you take the role of a hacker infiltrating a VR subnet to obtain information, is a fine addition to the main game, if entirely throwaway. Again it’s at its best when allowing you to work stealthily, but when forced to engage in conflict, Deus Ex’s deep-rooted mechanical flaws become glaring. Also, the fact that you’re working against the clock means the clunky movement becomes a real problem. Trying to shave seconds off your time is difficult when your avatar refuses to jump and grab onto a ledge.
” data-sheets-userformat=”(“2″:515,”3”:{“1”:0),”4″:(“1″:2,”2”:16777215),”12″:0}”>
Buy Now: Deus Ex: Mankind Divided at Amazon.co.uk (£41) | Amazon.com ($59)

Deus Ex: Mankind Divided could – and should – have been amazing. All the ingredients were there: an intriguing premise, engaging and mature narrative themes, solid gameplay foundations and a beautiful look. However, the rushed plot, nonsensical conclusion, under-developed characters and continued shortcomings in combat mean this is a title which fails to live up to its potential.

It maintains all of the gameplay qualities and faults of Human Revolution, but the flaws are masked by an initially intriguing storyline. However, when the plot falls to pieces, then comes to an end at a bizarre moment, all of those faults become glaring.

I was really hoping that this would be the title I’d spend most of the year playing, a game that could outshine many of the incredible games to come. Unfortunately, in the rush to get it to stores, many of Mankind Divided’s diamonds remain firmly entrenched in the rough.