What is the Asus ROG Strix Fusion Wireless?

Back in May 2018, alongside unveiling its upper-tier Fusion 700 gaming headset, Asus also announced that it was taking the line wireless with the introduction of the ROG Strix Fusion Wireless.

For all intents and purposes, the Fusion Wireless looks and feels like its more conventional wired siblings, but by cutting the cord, Asus has finally rectified one of the biggest shortcomings of Strix Fusion line as it stands.

At £145, you pay a premium for the privilege of gaming cord-free, but with a range of up to 20 metres and the headset’s signature styling and sound, it’s a hard offering to pass up.

If you’ve seen the other members of Asus’ ROG Strix Fusion headset family then you’ll know they all share a distinct visual DNA. In the case of the Fusion Wireless, it most closely resembles the Strix Fusion 300, which is to say it features some of the most conservative styling in the lineup.

In the world of gaming peripherals, however, this doesn’t mean a huge amount. More often than not, subtlety is in shorter supply when this particular brand of product design is on the table.

The Fusion Wireless is predominantly a mix of black and grey, which, considering the great swaths of flat, untextured plastic on show, could be considered both uninspiring and toy-like at the same time. 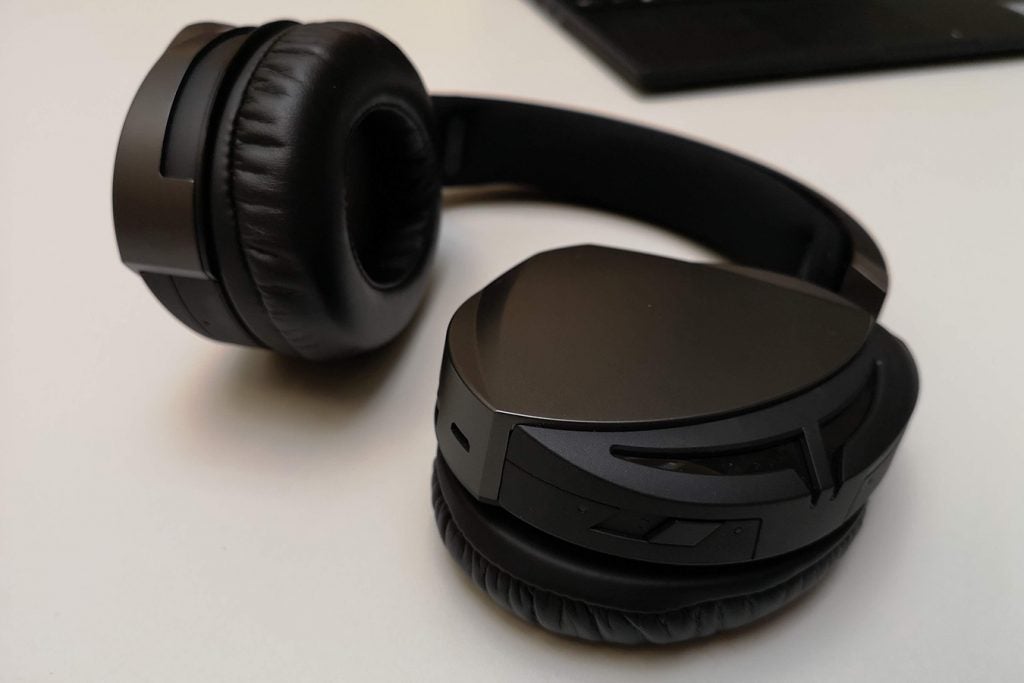 Some flared surfacing on the outer face of each ear cup adds a little interest, alongside some finer cosmetic work that integrates the signature Mayan-inspired ROG line. A shiny appearance up the back of each ear cup makes for a nice contrast against the matte plastic surrounding it, and by the time it reaches the headband it becomes an etched pattern, laid onto the metal hinges that also feature the ROG logo.

Throwing the Fusion Wireless on and off my head between bouts of Fortnite solidified how surprisingly sturdy and well-built they felt. Despite not looking like the most premium headset out there, I can attest to its resilience. I’d only question how well the outer faces of those ear cups will fair after being repeatedly shoved in a bag, assuming you’re one to travel and game regularly.

Like the entire Strix Fusion line, the Fusion Wireless are comfortable too. The broad adjustable metal headband, thick foam padding and sizeable oval ear cups collectively render this headset a pleasure to wear, even for extended periods. Ample flex and articulation meant that I never once felt the headset was pressing too hard against the sides of my head, and it was easy to slide one ear cup forward or back to temporarily hear the outside world without it feeling awkward.

Asus even throws in a second set of ‘hybrid’ ear cups that feature a mix of both leatherette and mesh in their design. In my experience, these offer a similar level of passive noise suppression compared to the standard ear cups that come fitted to the Fusion Wireless out-the-box, but they also help minimise heat (and by association sweat) build-up too. 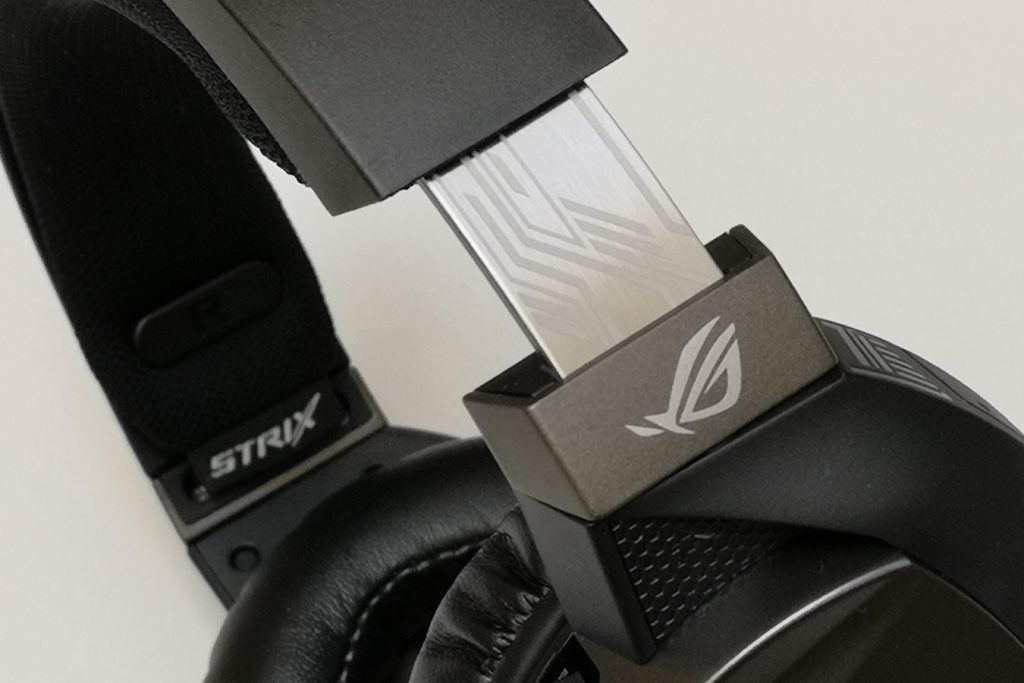 Swapping one pair out for the other is a painless affair, and involves removing each cushion and stretching their replacements back on. One concern I have is over the number of times this can be done before the covers begin to distort. I did spot some deformation that suggests the cushions won’t attach as snugly after only a handful of times being swapped out.

The Fusion Wireless are charged via the braided, gold contact-laden USB 2.0 micro-USB lead – another premium touch. However, unlike the Strix Fusion 300, this connection is for power only. This headset is unapologetically wireless, meaning you’ll still have to plug the 2.4GHz wireless USB dongle to connect it to your PC or PlayStation 4.

On the connectivity side, the Strix Wireless offers a plug-and-play experience for the most part, which isn’t always a guarantee with some wireless gaming headsets. When connecting to a Windows PC, you might need to wait a few moments for the PC to recognise what’s connected during first-time setup; PlayStation 4 users will enjoy an almost instant connection. One word of warning: slotting the compact USB dongle into the recessed front-facing ports of a PlayStation 4 console is likely to make retrieval a real pain.

I also tried connecting it to my mid-2015 MacBook Air, and aside from the volume indicator briefly showing up on-screen, nothing actually came of plugging the dongle into the USB slot. Even diving into the audio input and output settings yielded nothing – but, on paper, the Strix Wireless supports Mac too.

As for battery life, Asus makes some lofty claims, with the promise of 15+ hours of usage off a single charge. That’s more than two hours of gaming every day for a full week with power to spare. In practice, those numbers hold out. The Fusion Wireless outpaced the Strix Wireless’s 10-hour lifespan, managing a week of gaming and music playback before the LED indicator started to suggest that the headset could use a top-up.

On the subject of lighting, there are plenty of gaming peripherals known to offer eye-catching light shows, but unlike the rest of the Strix Fusion line, the Wireless remains in the dark.

The two cut-outs on the rear of each ear cup are occupied by reflective black plastic in place of the glowing LEDs and light piping seen on the rest of the range. Disappointing for some, perhaps, but having experienced Asus’ Aura software myself, there’s no love lost here – I’d happily take better audio and wireless performance over some red lighting.

Wireless performance is impressive. By opting for a 2.4GHz wireless protocol in place of Bluetooth, the Strix Fusion Wireless boasts both great range and reliability. If you’re in the same room as the receiver then I’d put money on its rock-solid connection. Compared to the two-metre cable that its wired siblings come with, a maximum operational range of 20 metres is unquestionably liberating. Even walking away from my laptop and standing at the opposing end of my apartment, with two brick walls between, there was no interruption during music playback.

Controlling your tunes is made possible by a sizeable touch panel, hidden beneath the outer face of the left ear cup – a trick borrowed from the Strix Fusion 500. You can swipe to control volume or skip tracks and tap to pause or play your tunes. It’s a shame that the Strix Fusion Wireless lacks mobile connectivity; this feature would likely enjoy far more use if it did.

One nice touch that I discovered is that whilst a quick swipe may raise or lower the volume by a couple of increments, for a more significant increase simply swipe and hold to pump the volume way up or quickly drop it back down too.

It isn’t only the lack of Aura LED lighting that sets the Wireless apart from the rest of the family, it’s also missing the line’s defining 7.1 virtual surround sound. Having heard the feature at work on the Strix Fusion 300, there’s a clear distinction between gaming with standard stereo and with surround sound enabled. 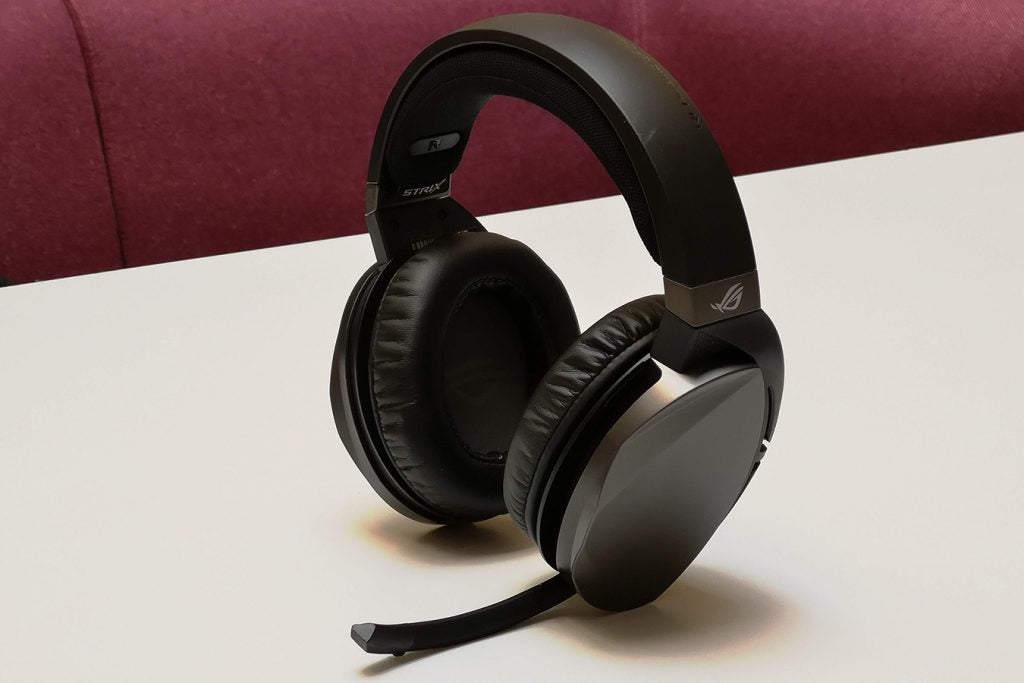 Its absence edges the Fusion Wireless back a step with regards to being engineered with gamers in mind – like the rest of the ROG brand. Instead, it more closely groups the headset with the wealth of other wireless options out there, those not as distinctly marketed as gaming peripherals.

Despite this, Asus large 50mm tuned Essence drivers still deliver great stereo audio to your ears. Side by side, I’d wager most users would struggle to tell in blind testing whether they were listing to gameplay over a wired or wireless connection. Plus, the distinct separation means you can still use the Fusion Wireless in competitive gaming conditions.

The audio favours the lower frequencies but, contrary to expectations, I was met with a pleasantly defined sound. Gunfire from high-calibre and high-gauge weapons packs bite, as opposed to sounding like a muddy thud, while the mids and highs offer plenty of clarity to enjoy your favourite tunes. If you want a little more polish from music specifically, you’d have to jump to the wired Fusion 500 for the option of high-resolution audio support.

As for the microphone, it’s a usable albeit uneventful ingredient in the Strix Fusion Wireless’s recipe. Without prompting, recipients to my sultry tones neither complemented nor complained that they could or couldn’t hear me. The flexible nature of the boom ensures you can perfectly align the microphone to your mouth, and the ability to physically flip it up to mute it is a nice bit of tactile design. Since there’s no ENC (electronic noise cancellation) onboard, it’s doubly important that the ‘airtight chambers’ that Asus likes to shout about within the Strix Fusion line offer respectable amounts of passive noise cancellation too.

The Fusion Wireless fills a void that the rest of Asus’ ROG Strix Fusion headset lineup has failed to occupy thus far. Adding a capable wireless option brings more versatility to the family as a whole, while also giving fans of the brand a new option worth considering.

Not only does it genuinely deliver on the promise of low latency and reliable wireless connectivity, but it boasts rich, powerful sound from its large tuned Essence drivers. The plug-and-play experience for PC and PlayStation owners is also appreciated, while nice design touches, excellent comfort and exceptional battery life help to make the Strix Fusion Wireless a dependable choice.

Adding wireless functionality to the ROG Strix Fusion line is welcome, although the lack of signature Aura LED lighting and 7.1 virtual surround sound means there’s little to differentiate this headset from affordable rivals.