What is the Asus ROG Strix Fusion 500?

The ROG Strix Fusion 500 is a gaming headset designed for competitive gamers. Featuring advanced synchronisation features for its RGB lighting, the headset is pitched at e-sports teams looking to up their game to the next level.

Add in excellent virtual surround sound and the Fusion 500 is a great choice for hardcore gamers in a clan or formal e-sports team. A lack of wireless support, slightly clunky control system and high price stop it from being a perfect option for more casual gamers, however. 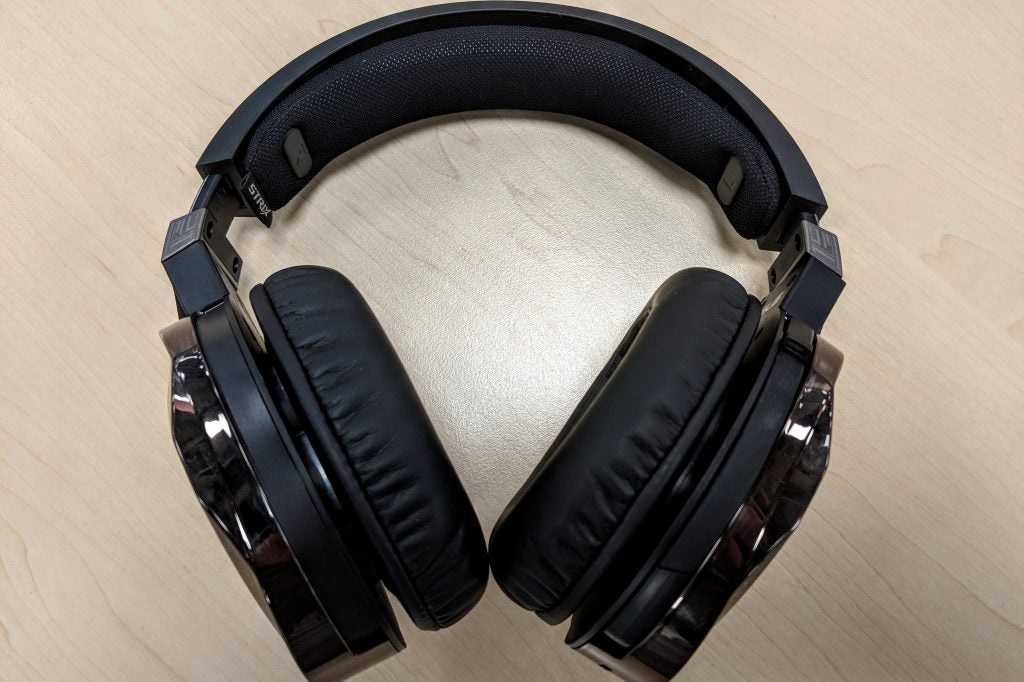 Featuring chrome gold panels with programmable RGB highlights on its sides, the ROG Strix Fusion 500 looks more like a sci-fi crown than a headset.

Whether this appeals will come down to personal preference – but for those who like to sparkle while they game, the RGB lighting is pretty awesome. The headset works with Asus ROG software and a specially built mobile app.

The app lets you pair and sync multiple headsets’ RGB lighting via Bluetooth, without the need to fire up the PC software and manually configure each unit individually. This isn’t a huge deal for regular-joe gamers, but it’s a nice touch for pro or semi-pro gamers who regularly participate in team tournaments.

Build quality is pretty good. Although the gold finish is a little too razzle-dazzle for my liking, it’s reasonably tough and managed to stay scratch- and blemish-free whilst being lugged around London in a backpack with a Gigabyte Aero 14. The pullout digital boom microphone and headband are solidly built, giving the ROG Strix Fusion 500 a suitably premium feel.

But, in my opinion, the real selling point of this headset is how comfortable it is. This is largely down to the headset’s atypical ear cushions, which are a mix of faux leather and mesh fabric. The material makes the headset one of the best I’ve tested for epic gaming sessions. 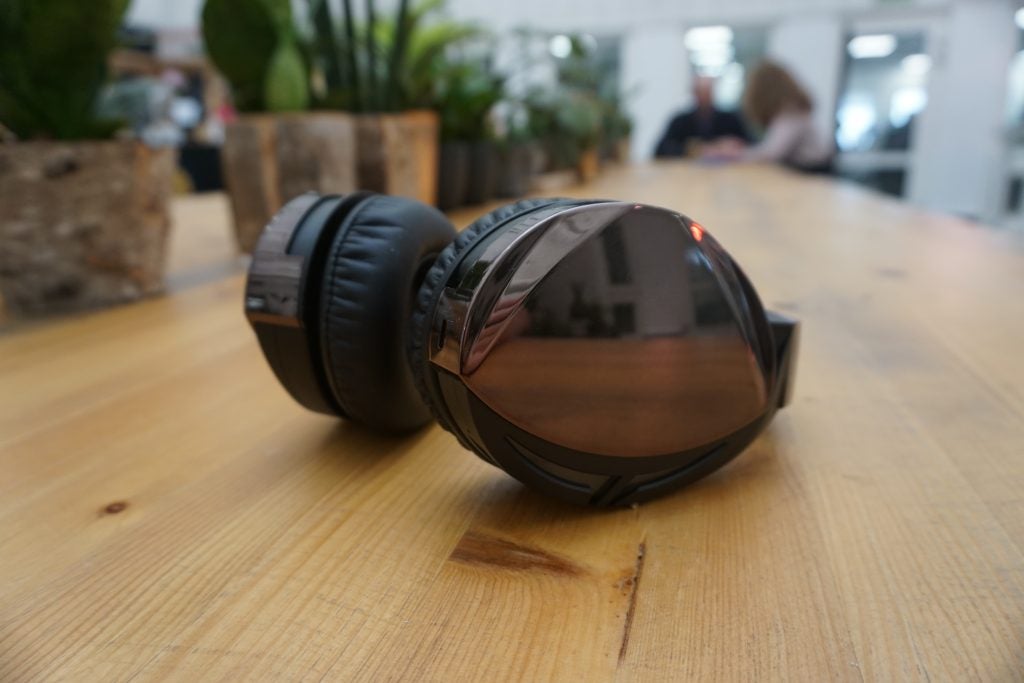 Unlike regular fabric cushions that can get a little pungent and soggy, and faux leather sets that are prone to getting sticky, the Fusion 500’s cups remained blissfully comfortable, even when playing for multiple hours.

The only issue with the ROG Strix Fusion 500’s design are the touch controls, which are slightly fiddly to use, and the lack of a 3.5mm jack.

In a bid to make the headset look even more elite, Asus has loaded unmarked capacitive touch controls onto the Fusion’s left side. The controls are entirely gesture based: swipe up or down to change the volume; left and right to change tracks; and press and hold to turn it on and off.

This may well sound cool, but in practice makes it frustratingly difficult to carry out basic tasks – adjusting the volume, for example – on the fly. During heated game sessions, where I’d initially set the volume incorrectly, I often found myself sending the volume levels to extremes using the Fusion’s touch controls.

In addition, there’s no easy way to adjust the voice and sound levels using only the headset – which is a basic feature I’d really like to see on hardware being pitched at competitive gamers who regularly play in teams.

The lack of 3.5mm jack is another minor annoyance that means, unlike the cheaper Fusion 300, the 500 won’t work with an Xbox. 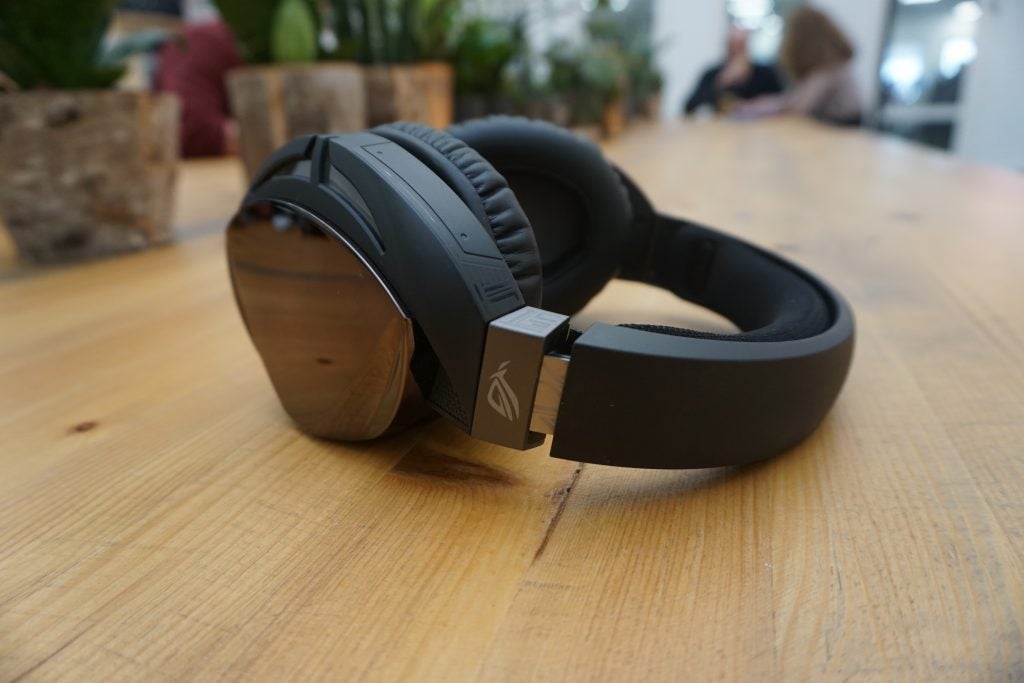 Fortunately, these issues are easy to forgive thanks to the headset’s stellar audio. Asus has loaded the Fusion 500 with a “hi-fi-grade” ESS ES9018 DAC and SABRE9601K amp. Both have been tuned by Bongiovi Acoustics to offer gamers what Asus claims is “the most immersive” virtual 7.1 surround sound you’ll find on any gaming headset.

At first, I took these claims with a pinch of salt. After all, virtual surround sound is no replacement for the real thing, and past headsets to make similar boasts – such as the Tritton Katana – failed to deliver the true “360” soundstage promised. But during testing, I was amazed to discover how well it worked on the Fusion 500.

The virtual surround sound is turned on using a physical button, hidden on the back of the left cup, and the difference is palpable.

Playing a PUBG (Playerunknown’s Battlegrounds) session, where detecting threats and sneaking around is key, the headset was a godsend. Turning corners and sneaking into old buildings, I could hear in great detail the direction of gunfire and creaking floorboards. I still got sniped by the superior players 99% of the time, but with this headset I could at least figure out the direction I’d been shot from – something I couldn’t always do using competing headsets with virtual surround sound.

The 50mm drivers offer a pleasingly dynamic feel and dealt with fluctuating volumes – when an enemy player went from a slow scratchy crawl to a thumping sprint – surprisingly well. The high-end is also impressively well handled, gunfire and explosions are suitably attacking and powerful, without ever sounding acidic. The low-end is nicely represented, too – and, unlike many headsets, isn’t too fat and warbly.

The boom mic works well enough for voice chat. Even during heated shootouts in Titanfall 2 and CoD, my teammates could hear what I was saying without difficulty – even in a shared lounge with lots of background noise. 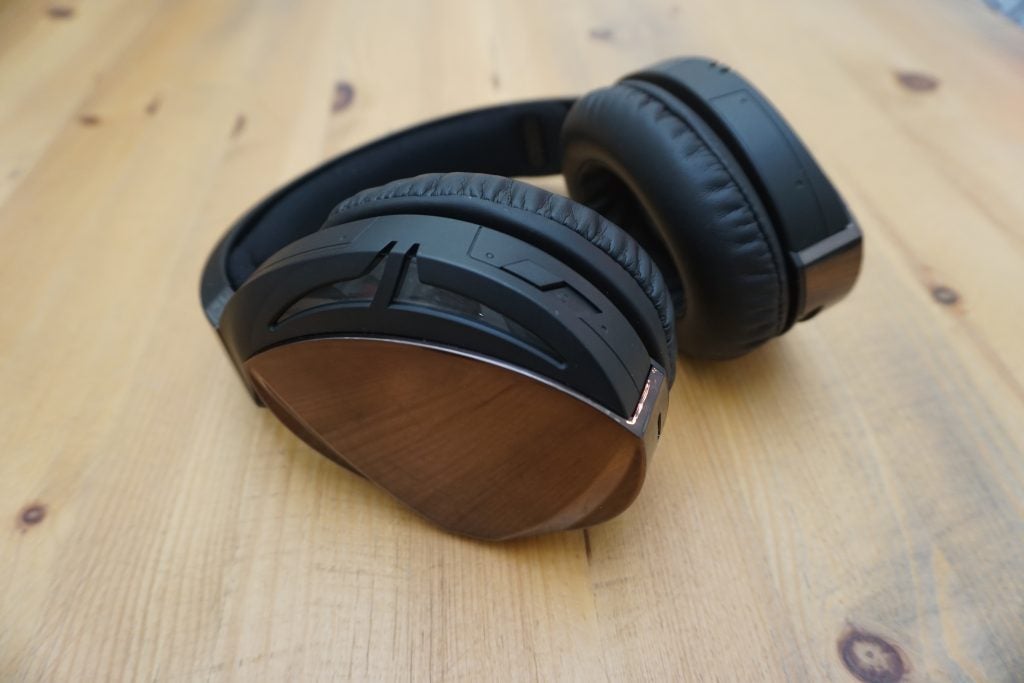 If you’re a competitive gamer who’s looking for a top-notch cabled headset for your PS4 or PC, then the ROG Strix Fusion 500 is a great choice. With pricing set to be around £150, you’ll get a wonderfully comfortable, great-sounding headset offering useful virtual surround sound. Flashy players will also love the customisable RGB lighting and mobile app, which makes it quick and easy to sync effects across multiple headsets.

But the high upfront cost and lack of wireless or Xbox support make the Fusion 500 less appealing to more casual console gamers, who’d be better off investing in a more affordable choice, such as the Razer Kraken Pro V2. I’m also not completely sold on its on-board control system, which is a little fiddly to use. I’d have preferred a more basic approach, with physical volume rockers for gameplay and voice chat audio.

A great headset for competitive gamers with a penchant for RGB lighting.