What is the Asus ROG Strix Fusion 700?

Asus has plenty of experience under its belt when it comes to gaming accessories. Its own Republic of Gamers brand covers everything from sound cards and motherboards to keyboards and mousepads, as well as a healthy selection of headsets.

The Strix Fusion 700 is fresh off the conveyor belt and one of the most premium ROG headsets you can grab right now. Featuring some sleek design work as well as excellent audio quality, this is a real treat for the eyes as well as the ears.

Compared with the previously released ROG Strix Fusion 500 headset, there’s an interesting new design element at work. Namely, some integrated LED strips that can be controlled via an app and synced with your buddies’ sets (or your other ROG gear), so you can all be matching. If that’s your bag. 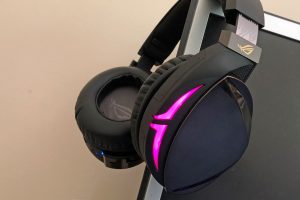 Although some gaming headsets scream ‘nerd alert’ at the top of their lungs and are best left in the confines of your bedroom, the ROG Strix Fusion 700 offers quite a sleek finish.

There are no over-the-top design touches or crazy frills, beyond those LED strips housed on the cups. Thankfully, these can be deactivated when you’re out and about, to avoid drawing unwanted attention. Branding is kept to a minimum and I was perfectly happy to wear these ‘phones whenever I headed into town, without feeling self-conscious.

A sturdy metal band coated in plastic connects the cups. The overall construction is reassuringly tough, so you can happily throw the headset into a backpack among other bits and bobs, no stress. Sadly, while the cups will twist 90 degrees to lie flat, you can’t fold up the Fusion 700 to make them more compact.

The flat surface of the left ear cup houses all manner of touch-sensitive controls. For instance, a tap will pause or play your media, while swiping left or right skips tracks. You can also change volume by swiping up or down.

In general, this setup works well – although you have to be pretty accurate with your taps. If you strike anywhere but dead-centre, the touch often won’t be recognised. All the same, after a few days of use I found I could usually get a registered hit first time. 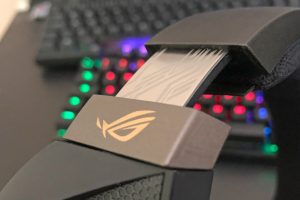 The microphone is hidden away inside the edge of the cup, and can be yanked out at any time by pulling down on a tiny tab. Once you’ve done this a couple of times while wearing the headset, you’ll find it in no time. The rubberised length is fully flexible, and when you’re done, you can slip the mic back in place to mute it.

Asus has really nailed comfort levels, too. The Fusion 700 can be worn all day long, thanks to the generously spacious ear cups and effective scalp padding. At no point did I feel like any part of the headset was pinching or squeezing, and there’s plenty of room for adjustment.

Of course, in hot weather those leathery cups can get a bit sweaty, so it was always a relief to get them off after extended use and give my head a proper airing.

A pair of replacement ear cushions are bundled in the box, not to mention a lovely cloth bag to carry it all in. 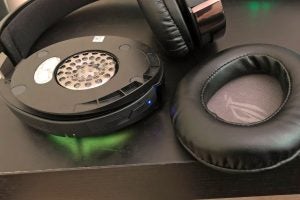 Of course, this wouldn’t be a gaming headset without at least one outlandish design quirk. In the case of the ROG Strix Fusion 700, you get an RGB light strip running along the rear edge of each cup.

Nothing particularly thrilling in that, except you can fully customise the colours using Asus’ Aura Sync app to coordinate with fellow gamers so all your headsets are pumping out the same hue. Because nothing says team camaraderie like a bunch of people whose heads flash the same colour.

The Aura Sync app itself is pretty straightforward to use. Syncing with the Fusion 700 is stress-free and you get a basic level of customisation. A colour wheel provides control over the hue, while you can also fiddle with brightness levels and choose between static or ‘breathing’ options. That’s pretty much your lot. 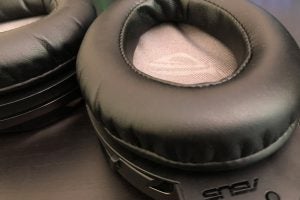 The Fusion 700’s high-quality DAC produces incredible sound, whatever you’re up to. In-game audio is full-bodied, for a truly immersive experience. Likewise, music sounds impeccable, with full support for Hi-Res playback. Just enough bass is produced without drowning out the rest of the sound, so rock and dance tracks have plenty of punch. More mellow sounds come out crisp and clear.

Like the SteelSeries Arctis 7 and other premium gaming headsets, the ROG Strix Fusion 700 supports DTS Surround Sound 7.1. This can be toggled on when needed via a dinky button on the left cup. Unfortunately, this sits quite close to the Bluetooth toggle, while both buttons lie flush with the plastic surface. Therefore, it’s all too easy to hit the wrong one by accident.

Still, there’s no denying that the surround-sound functionality is excellent. Playing online shooters is an absolutely pant-staining experience with these things strapped to your skull. I could hear bullets whipping all around me, while explosions actually caused me to shriek like a startled llama. 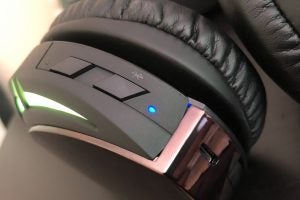 Voice pickup from the mic is also top-notch. My comrades had no problem clearly hearing everything I said throughout online sessions. The same was true when using the headset for voice calls.

As well as using the bundled micro-USB-to-USB cable to connect to your PC or console, the Fusion 700 can also be hooked up to your devices via Bluetooth 4.2. Unfortunately, there’s no support for 3.5mm, so Xbox owners won’t get the headset to work out of the box.

I had no trouble wirelessly pairing the headset with a variety of tablets and phones. Connection remained strong even when I was a couple of rooms away, with no pauses or delays when chatting or playing music. There’s no dip in quality, either. Music still sounds crisp and punchy, no matter what you’re into.

Likewise, those media controls continued to work as expected. I found that I could skip through tracks on Spotify and answer calls as they came in with a quick tap of the left cup. Although, again, I found that I occasionally missed the sweet spot with my taps until I’d become familiar with the layout. 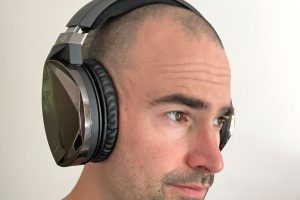 With Bluetooth on the go, that 900mAh built-in battery offers a more than respectable amount of use between charges. The headset survived for several lengthy gaming sessions with the lights deactivated. If you want to dazzle everyone with a bit of a light show, you can still expect a few hours of play time before you’ll need to charge up again. A full charge takes just over three hours.

Unfortunately, Asus has integrated the most bowel-twistingly terrifying battery-alert system in the world.

When the headset has only an hour or so of charge remaining, the ROG Strix Fusion 700 emits a heart-stopping tone. This tone repeats every minute or so – and it’s loud. So much so that I wrenched the set from my head the first time it happened. Even when I knew it was coming, the noise was so ear-piercing that I cringed. And it isn’t in any way linked to the Fusion’s volume level either, so there appears to be no way of preventing this aural assault.

Between the excellent performance and strong range of features, there’s plenty to like about Asus’ new headset. Audio quality is sublime, while the restrained design (barring that customisable lighting, of course) means you won’t look out of place on the daily commute.

Most of the drawbacks are minor niggles at best, be it the fact that the Fusion 700 won’t fold up properly or a couple of small usability complaints. That said, the lack of 3.5mm support is a real shame, while that ear-splitting battery warning is seriously obnoxious.

If you’re after top-end sound quality and comfort, plus the flexibility of Bluetooth support, the Strix Fusion 700 won’t disappoint.