The PC is the greatest gaming platform on earth, but the size of many such rigs makes them rather inflexible. Not so with the Asus ROG GR8 II, since this little PC is console-sized and will be as at home under a TV as it is connected to a monitor. A low price for this mid-range model (the T01Z) makes it all the more exciting, although a few hardware upgrades may be necessary to make the most of this computer.

Update: Since my inital review, Asus has informed me they plan to sell a version with an SSD in the UK. It’s a good move, as flash storage would make the PC much faster to boot and load applications. If you want a GR8 II, it might be worth waiting. Asus has also announced that several new specifications will be launching later this year, including a 6GB GTX 1060 model along with a cheaper GTX 1050 Ti version as well. It might pay to wait until then, although right now some retailers are selling the ROG GR8 with a mouse, keyboard, headset and mousemat bundle. I’ve not tested the products in the bundle, but it’s a decent freebie.

I love the look of the ROG GR8 II. Measuring just 88 x 299 x 281mm, it’s around the size of a PS4. It’s designed to stand vertically, although there’s no real reason why you couldn’t lay the PC flat; you may want to attach some stick-on felt feet for protection. This offers plenty of flexibility as to whether the GR8 II will be used as a living room PC or simply a standard desktop computer.

Gaming PCs are known to sport over-the-top design, but the ROG GR8 II gets the balance just right. A combination of the simple styling – a grey exterior with a burnished orange flourish in the middle – with neat angled sides makes this PC stand out for the right reasons. 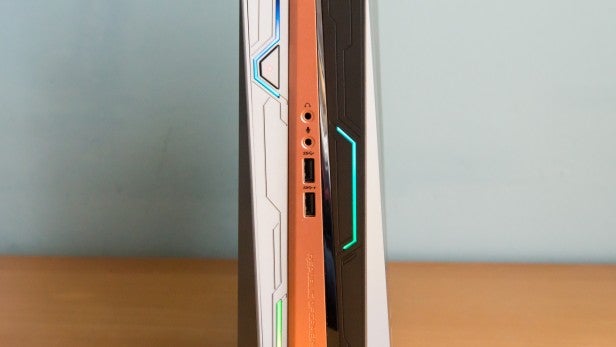 Asus’ Aura LEDs run through the case, letting you synchronise the GR8 II with other ROG products. There are 8 million colours from which to choose, with plenty of effects to cycle through a range of choices. Personally, I prefer a fixed, more subtle colour. You do have the option to turn off the lights, too, if you don’t want any distractions.

Included are all the ports you’d expect from a modern PC, including two USB 3.0, headphone and microphone ports at the front. At the rear, there are a further three USB 3.0 ports, a USB 3.1 Type-C port, Gigabit Ethernet (there’s built-in 2×2 802.11ac Wi-Fi as well), line-out and optical S/PDIF. Via the integrated Nvidia GTX 1060 graphics card, there are two HDMI and a single DisplayPort output. 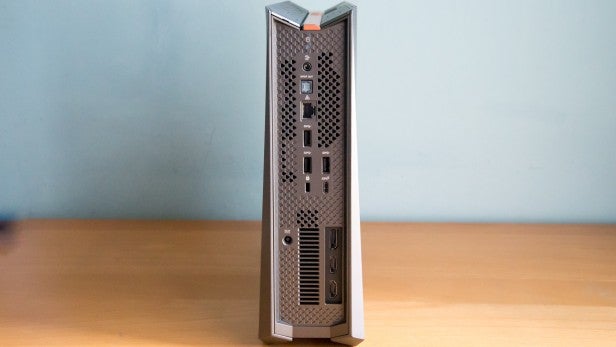 Since this is a proper PC, you can peel off the front plastic fascia to get at the screws to release the top panel and expose the PC’s innards.

This provides access to the 2.5-inch hard disk mount and the empty M.2 slot. While the 8GB of RAM should prove sufficient, to perform an upgrade here will be difficult since only one memory slot is easily accessible. The other slot is located on the underside of the board, which is a rather more complicated disassembly job. 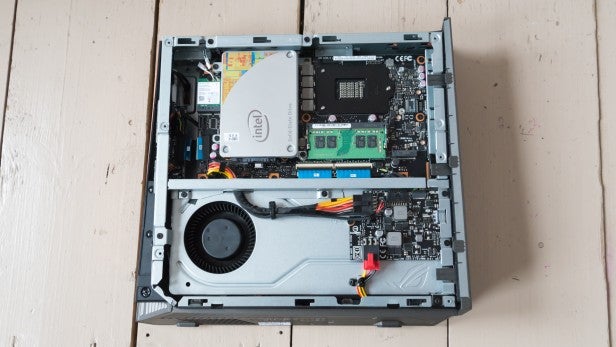 A Kaby Lake Intel Core i5-7400 CPU is at the heart of the GR8 II. This quad-core chip runs at a stock speed of 3GHz, but can Turbo Boost to 3.5GHz when there’s enough thermal headroom. It’s a full processor, too, which is good to see; many small-form-factor computers use a low-power, lower-performance chip. As a result, this PC is rather quick, scoring a respectable 14,270 in Geekbench 4’s multi-core test. In simple terms, the ROG GR8 II should be able to handle any task you throw at it.

In terms of graphics, Asus has opted for an Nvidia GTX 1060. Sadly, this model comes with 3GB of GDDR5 RAM, rather than the full 6GB model. There’s no way to change the graphics card, either, since it’s custom-built to fit the case. 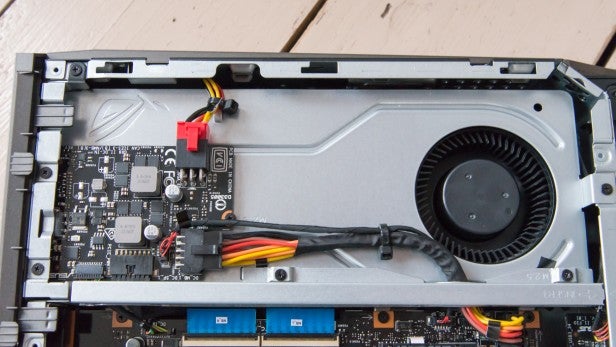 That said, performance isn’t to be sniffed at, and the ROG GR8 II can still put out some impressive frame rates. Running at Full HD, I saw 84.77fps in Rise of the Tomb Raider, and 82.36fps in Middle-earth: Shadow of Mordor. Upping the resolution to 2,560 x 1,440 at High detail, I saw frame rates of 57.6fps and 63.44fps respectively. Ultra HD 4K gaming is out of the question with this PC, but it’s certainly a capable QHD rig.

Storage performance is a little disappointing. Our review sample featured an Intel SSD, but the retail version sold in the UK has a 1TB 7200rpm mechanical hard disk. That’s plenty big enough in terms of storage, but Windows 10 really needs solid state storage to fly. The easiest upgrade is to add an M.2 SSD to the PC. The Samsung 850 EVO M.2 drive is comparatively quick and great value, although the NVMe-based Samsung 960 Pro is much faster. 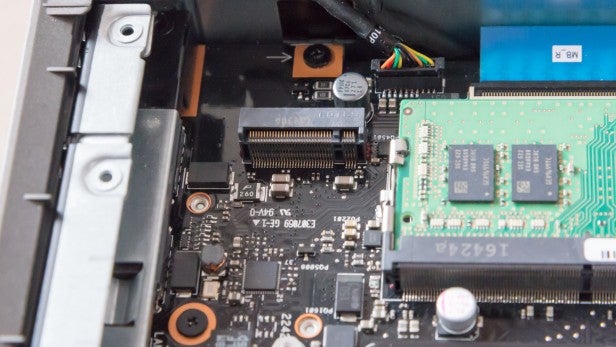 When turned on, the ROG GR8 II makes a constant humming noise, which I measured at 36.7dB from 15cm away. Load a game or perform anything more strenuous and the fans kick into high gear, pushing the noise to 46.8dB. This isn’t too bad – although, once again, I found myself wishing for a PC that’s near-silent when idle. Sadly, you can’t adjust the fan profiles to reduce sound, as the GR8 II has a cut-down and basic BIOS.

On a first glance, the ROG GR8 II is rather good value. It’s a small and powerful gaming PC, capable of running games at QHD resolutions smoothly. But, the mechanical hard disk is disappointing, especially given that an SSD (SATA or M.2) could be fitted instead.

That said, adding an M.2 drive is a simple upgrade, as is replacing the mechanical hard disk. At this price there isn’t a huge amount of competition out there – and, overall, the small size of the GR8 II’s case makes it an attractive choice. If you fancy something else, check out our best PC guide.

One final point worth making is the warranty. This is incorrectly listed on some websites as a one-year deal. In reality, Asus tells me, it’s three-year pick-up and return coverage, which means Asus handles the shipping of the product to and from your home, as well as the repairs. That’s very generous and not often seen from big-box PC manufacturers.

A well-built and attractive compact gaming PC with a great warranty, but its mechanical hard disk is a little disappointing.