Samsung was the first company to bring real consumer PCI-E-based M.2 drives to the market, but it’s hardly a new player in this arena – the firm released several OEM drives before it made a huge impact with last year’s 950 Pro.

That drive impressed, and now its successor has arrived. The 960 Pro has been beefed up with several new features – and I have high hopes.

The new drive relies on an improved version of the 3D V-NAND, which debuted in the SSD market in 2015 in Samsung’s conventional SATA SSDs.

This type of memory marks a big departure from previous SSDs. Here, transistors are stacked vertically inside the silicon chips – rather than just horizontally. This allows for transistors to be place in layers, which means more space available for those transistors. 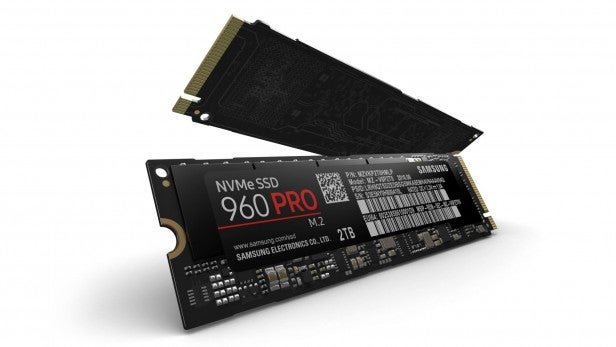 The extra space relieves pressure on miniaturisation, which means Samsung can pack in a greater number of transistors and devote more time to improving performance and efficiency.

Most SSD manufacturers now use a version of 3D V-NAND, but Samsung was first – and now it’s taken a leap forward with the chips inside the 960 Pro.

This year’s NAND uses a 48-layer design, which is a big jump from the 32-layer design that came before it. It allows Samsung to include twice the storage capacity on each die used to build these SSDs.

As a result, Samsung now uses 256GB NAND chips rather than 128GB chips, so fewer chips are used to build each SSD – and bigger capacities are now available. I’ve reviewed the 1TB version of the 960 Pro, but a 2TB model is also available alongside a 512GB version.

The NAND chips aren’t the only improved component. The controller used in older Samsung drives has been replaced by a Polaris (not to be confused with AMD Polaris graphics cards) model, which arrived in a couple of M.2 drives only found inside machines built buy OEMs (original equipment manufacturers). The new chip has five cores – two more than its predecessor – with one core dedicated to host system communication. The SSD’s DRAM is now attached to the top of the controller, which saves even more space on the drive.

Related: The best gaming PC specs to build yourself

The move to additional cores is important, because it means Samsung doesn’t have to use a high clock speed in the controller to deliver better performance on the 960 Pro – and that, in turn, helps keep temperatures down.

Heat generation and dissipation is a bigger concern than ever on M.2 SSDs, but it’s no surprise. More powerful controllers generate more heat, and the NAND chips themselves are faster and denser. Heatsinks are common on SSDs of this type, but Samsung’s solution is nothing short of genius: the stickers that tell you what sort of drive you have are actually coated in copper on the bottom, aiding heat dissipation. 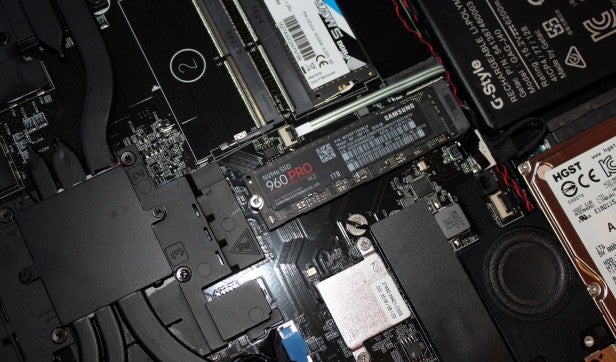 Aside from that, however, little has changed about the 960 Pro’s physical design. It’s still an 80mm-long M.2 drive with a sticker on one side and all of its hardware on the other. It remains slim enough to fit into the snuggest of spaces on laptops and small form-factor PCs.

Samsung has paired the drive with a five-year warranty that’s in line with many rivals, and it’s given the new drive a better endurance rating than its predecessors: the 1TB model has an 800TB rating, which is twice that of the 950 Pro.

The prices of the three drives are obviously different, but all are significant. The 1TB sample on review costs a mighty £690, while the 512GB and 2TB models arrive at £350 and £1,290.

Performance-wise, there’s no competition for the 960 Pro, but those figures will price out many potential buyers. Sadly, it isn’t yet possible to get a comparable product for any less; a 1TB version of the Toshiba OCZ RD400 will set you back a similar amount, for example.