Most 17.3in gaming laptops pair their imposing stature with huge, flagship components. That’s great for smooth frame rates, but not so good for the price.

The Asus ROG G752VM is different. This machine has a 17.3in screen, but its £1,600 price keeps things relatively sensible in a market that sees many laptops costing twice as much.

The G752VM’s price hasn’t led to much compromise when it comes to components. Graphics horsepower still comes from one of Nvidia’s latest Pascal graphics chips: the GeForce GTX 1060. It’s proved to be one of the more popular new parts, and it’s the perfect GPU for 1080p gameplay. 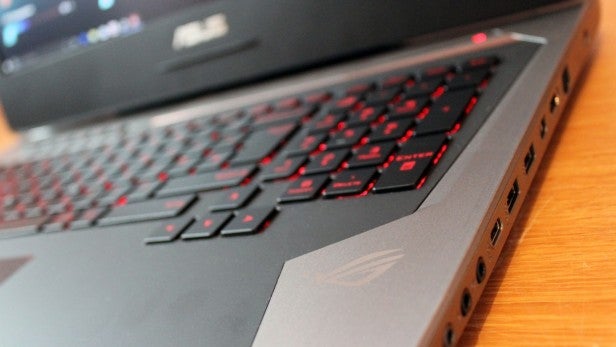 The GTX 1060 deploys 4.4 billion transistors across 1,280 stream processors, and it has 6GB of GDDR5 memory. The mobile chip runs at 1,404MHz, which is about 100MHz shy of the desktop card – but these specifications still outpace most full-fat desktop GPUs.

The current-generation GPU is paired with a Core i7-6700HQ. The familiar chip is a 2.6GHz quad-core processor with a Turbo peak clock speed of 3.5GHz. Here it’s paired with 16GB of 2,400MHz DDR4 – another bit of familiar hardware, and a decent speed too.

Video: How to choose a laptop

There’s a 256GB Toshiba XG3 SSD and a 1TB hard disk, which is entirely conventional. A slightly stranger inclusion, in 2017 at least, is a DVD drive – a welcome addition if you’re into playing older games, or watching films.

The G752VM’s nearest competitor is another Asus machine: the ROG Strix GL702VM. That system also has a GTX 1060, but it costs a more affordable £1,200 – and that means it has a Core i5 processor rather than a beefy Core i7 chip. That machine also sports just 8GB of memory and a 128GB SSD.

The G752VM has dual-band wireless and Gigabit Ethernet, plus plenty of ports. There are four USB 3 ports, a USB 3.1 Type-C connector, an SDXC card slot and both HDMI and mini-DisplayPort outputs.

The G752VM is at the affordable end of the 17.3-inch spectrum, but that hasn’t stopped Asus from ensuring that it looks the part.

This machine adheres to the firm’s “armour titanium and plasma copper” design language, which means plenty of brushed metal and burnt orange. There’s a vibrant-coloured area on the hinge with the Republic of Gamers logo, orange slashes on the lid, and dramatic vents across the entire rear. 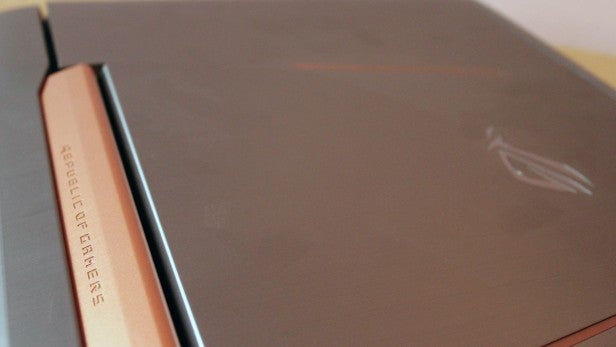 The interior has an angled power button and an area decorated with the Mayan-inspired design that now appears across most Republic of Gamers products. There’s also a two-tone colour scheme with brushed metal around a darker, matte core.

The Asus looks the part, but there’s no sign of slimming down: this machine weighs just over 4kg, and it’s 44mm thick. That’s at the top end, even for 17.3-inch machines – the Asus ROG Strix GL702VM is about 1.5kg lighter and about half as thick.

The G752VM is sturdy, with barely any movement on the screen and only a little depression on the wrist-rest. I’ve no qualms about putting this machine in a bag to take to LAN parties, but other machines are stronger. Laptops such as the Scan 3XS LG17 Carbon Extreme are more expensive, for example, but they exhibit no weakness.

Elsewhere, smaller touches indicate the Asus’ gaming pedigree. The row of five macro buttons and a streaming key come straight from the firm’s pricier laptops, and elevate the G752VM – only expensive machines from Asus and Gigabyte’s Aorus range have included such features.

There’s a bit of interior access available, too. Remove one screw and pull on a rubber tab; a base panel lifts away to reveal two spare memory sockets, the hard disk and the M.2 SSD, alongside a spare M.2 connector. That’s better than the cheaper machine, which had no practical way to get inside the system. 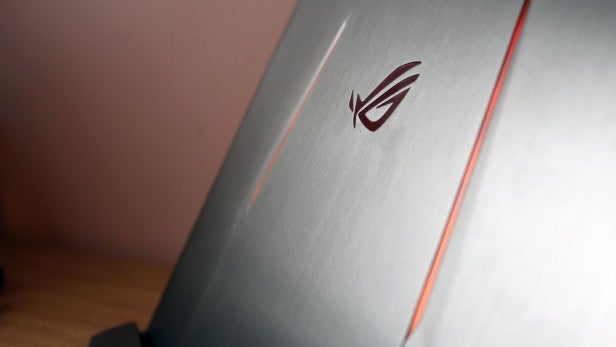 This machine also comes with the Asus ROG Gaming Center app. It’s a one-stop tool for tweaking several aspects of this machine, with Standard and Extreme performance modes, screen options, audio tools and a macro-recording module. It covers most bases, although higher-end Asus laptops do offer more.