The G752VM comes with Standard and Extreme modes, with the latter chosen by default. In practice, there’s little difference between the two: the 1,404MHz clock improved to around 1,600MHz in Standard mode during gameplay, and managed about 1,680MHz in Extreme mode.

In Extreme mode, the GTX 1060 had no problems playing games at 1080p. It managed solid minimums of 45fps in Middle-earth: Shadow of Mordor and GTA V, and returned averages of 71fps or higher in every title.

Those scores were recorded in the default Extreme mode, but there’s little difference between that option and Standard mode. With the latter chosen, games were only a frame behind – or sometimes less.

Those scores are virtually level with the cheaper Asus ROG Strix GL702VM, but the G752VM does have an advantage over its rival as a result of its Core i7 processor. The difference can be seen in 3DMark: Fire Strike; the G752VM scored 9,664 in this test, but the GL702VM could manage only 8,456. 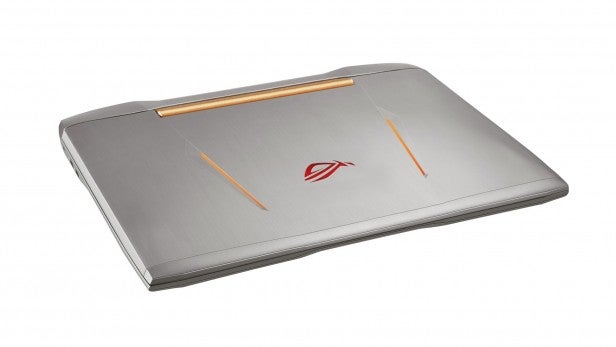 The G752VM’s single-core Geekbench score of 3,198 is only slightly ahead of the GL702VM’s 3,036, which is no surprise – there isn’t much between those two chips in terms of raw single-core speed. However, the G752VM’s multi-core score of 12,534 is thousands of points ahead of its rival – that’s the difference that Hyper-Threading makes, and that advantage will be particularly obvious during multi-tasking and complex games.

Once again, I saw little performance difference in Standard mode: the single-core score dropped by a couple of hundred points, and the multi-core result decreased to 11,853.

The Core i7 processor and GTX 1060 graphics core secures the G752VM for a wide variety of uses. It will play any current game at 1080p, and it has enough power to output to ultra-wide panels and VR headsets. However, those more demanding tasks will likely require some tweaking to get games running smoothly. Don’t expect 4K, though.

Similarly, the processor will handle anything except top-tier tasks – it won’t bottleneck games, and it will run the vast majority of work applications.

There were no surprises from the storage: it was blisteringly fast. The Toshiba SSD delivered read and write speeds of 1,981MB/sec and 1,419MB/sec, which is enough to speed up system boot and game load times. It’s also better than the cheaper Asus, which had a standard SATA drive.

The mid-range specifications and large design meant that the G752VM didn’t cause any thermal problems. In Extreme mode, the CPU and GPU peaked at 89oC and 77oC respectively, and in Standard mode only the GPU cooled down by a single degree. The G752VM’s CPU result is a degree cooler than the cheaper model, while the graphics core is much chillier.

The solid temperature results translated well to the rest of the notebook. There was a little heat on the underside of the laptop, but that was it – as far as I’m concerned, that’s nothing to worry about. 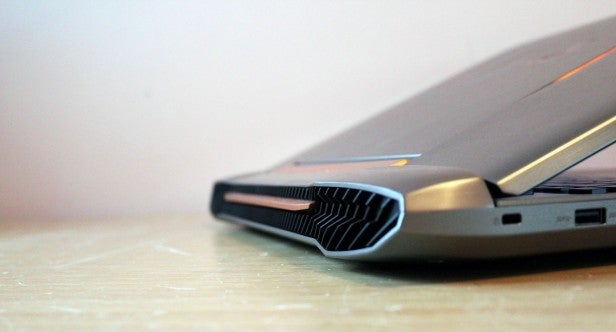 The noise output was good, too: the Asus generated a low and quiet tone that was consistent and easily drowned out with a headset or the speakers.

Asus has kitted out the G752VM’s 17.3in screen with a Full HD  resolution. That’s fine for gaming, and it makes sense when the GTX 1060 is considered, but it does mean that this panel can’t match the sharpness of some other gaming machines.

Its density level of 127ppi is relatively low, so individual pixels will be easy to spot. If that’s a concern, seek out a laptop with a higher resolution that will deliver a more crisp image.

This screen supports Nvidia G-Sync to a limit of 60Hz, which is fine for a mid-range machine, and it has a matte coating – good for gaming under bright lights.

Quality is decent. The contrast level of 1,044:1 is ample, and the black level of 0.32 nits is enough to deliver impressively deep shades. The average Delta E of 3.27 is fine; the Asus’ screen delivers 86.5% of the sRGB colour gamut, and the colour temperature of 7,532K is a tad cool – but not chilly enough to make an impact.

Those scores are in line with my expectations for mid-range gaming laptops, and they ensure that the Asus will deliver good depth and colour accuracy for games and movies. They’re also better than the Asus GL702VM in every category.

Asus includes a Vivid mode on the G752VM, but that option made little difference – it boosted the brightness, but most results remained the same.

The G752VM continued its good form in uniformity tests. This machine’s 17.3-inch panel lost only about 3% of its brightness along the top edge, with 6% vanishing across the middle row and about 10% disappearing at the bottom.

That result is more akin to what I see from gaming laptops that cost £1,000 more than this one, and it means the G752VM delivers impressive consistency, with no sign of colours changing their shades or strength levels from one corner to another. There’s no sign of backlight bleed, either.

The Asus’ screen delivers solid performance in every key category, and it helps the G752VM make its case.

The audio kit is less convincing. The Asus has two 2W speakers and a subwoofer, but the latter component is the only one that really impressed. The sub ensures that there’s a decent amount of bass depth here, but the mid-range is muddy and high-end sounds are too tinny for my taste.

They’re not the loudest speakers, either – there’s enough volume, just, but most gaming notebooks have more punch.

The Asus audio tool has Music mode chosen by default, but the Movie and Game options make little difference – they’re a tad punchier, but that’s it. The G752VM’s speakers are just about acceptable, but I’d always use headphones or third-party speakers rather than the kit included here.

Used as our main laptop for the review period
Tested for at least a week
Used consistent benchmarks for fair comparisons with other laptops
Reviewed using respected industry benchmarks and real world use
Previous
Asus ROG G752VM Review Next
Keyboard, Trackpad, Battery and Verdict Review