The N552VW runs Windows 10 and comes with relatively few bundled pieces of bloatware. Sadly, McAfee LiveSafe is pre-installed and can occasionally cause problems when opening some programs, blocking them without warning. I’d uninstall that relatively quickly and find alternative security software.

Aside from that, Asus has corralled all its bloat into a program called Asus Giftbox which is a page of apps that send you to the Windows 10 Store to download. There’s also a pre-installed Gameloft app that provides links to the firm’s various games, which, again, redirects to the Windows 10 Store. As far as bloatware goes, it’s a relatively minor offender compared to the likes of Acer and Lenovo.

The Asus N552VW comes equipped with Intel’s top-end Core i7-6700HQ CPU, which is one of the most powerful mobile processors around. It’s a quad-core chip with a base clock speed of 2.6GHz and a maximum Turbo Boost of 3.5GHz. Paired with 16GB of DDR4 RAM it’s capable of fantastic performance in simple desktop tasks and multi-core-focused media-encoding tasks to boot.

The laptop’s 13,168 Geekbench multi-core benchmark score is a testament to all that. This puts it in the league of high-end gaming laptops in terms of processor performance, although at this price you’d expect nothing less. 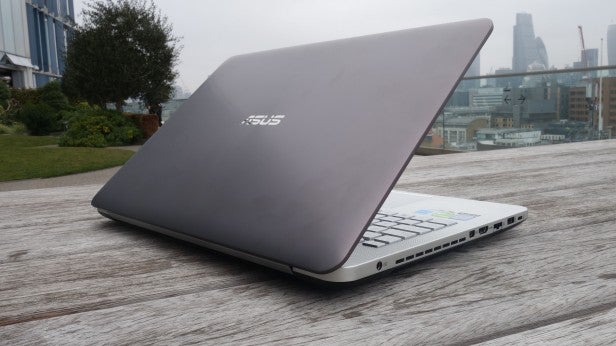 Graphics power is provided by the mid-range Nvidia GeForce GTX 960M, which is a highly capable card at Full HD resolutions. It only has 2GB of memory versus some models’ 4GB, but it’s still a decent piece of kit.

I fired up a game of XCOM 2 and applied the game’s recommended settings based on my hardware. Its choice of High was fairly optimistic and while this turn-based game was definitely playable at 27fps, I found dropping detail settings to Medium and turning off anti-aliasing improved things to a consistent and smooth 47fps.

Metal Gear Solid V: The Phantom Pain proved to be no problem at Medium/High settings, with the game sitting rock solid at the game’s maximum 60fps through the game’s quieter portions and dropping below 50fps when the action heated up.

In terms of quantitative testing, the mid-range 3DMark Cloud Gate benchmark yielded a score of 16,878, which is par for the course for this sort of hardware.

Battery life is a real weak point for this laptop. Unplugged and doing document editing and web browsing tasks at the laptop’s default settings, I managed just under three hours from a single charge before I bottled it and plugged it back in.

My other real-world test, which is watching Netflix at half brightness, saw the device consume 40% of its battery life per hour, which is pretty poor. While it’s entirely plausible that this laptop won’t venture far from home, it’s still a minus point.

The 720p webcam isn’t particularly good. Despite its reasonable resolution, it doesn’t handle poorly lit or backlit subjects very well. With sunlight shining in through gaps in a roller blind behind me, the camera set its exposure to minimise the light and my face was mostly obscured. In a lit room without backlighting images were still noisy, but my face was at least recognisable.

The microphone isn’t great: it’s perfectly acceptable for video chatting, but if you’re going to be chatting a lot, an external headset or microphone will be a better bet.

Previous iterations of this range of laptops have included a small external speaker for better bass performance, but this has been scrapped for 2016’s models. What’s left is a pair of upward-facing speakers that have excellent stereo separation and speech handling.

Everything else, including music, is fine, but low-end performance is lacking. It’s also not particularly loud; even turned up to maximum volume you won’t be able to fill a room with noise. 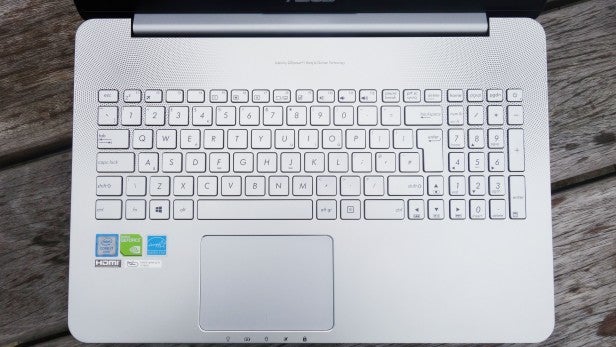 As a gaming and multimedia laptop, the Asus N552VW is a decent machine with excellent overall performance and a decent high-resolution screen. If that’s all you’re after, it’s a great buy.

However, it’s unrefined elsewhere. The keyboard and touchpad are merely average and the speakers don’t excel. Battery life is also poor and the plastic shell is beginning to look dated. In short, this laptop is entirely focused on performance, and if that’s your primary motivator, you’ll be very satisfied.

There are alternatives, however. The Microsoft Surface Book is significantly more expensive, but its refined build and impressive power make it a great laptop for working on the move. If gaming is your priority, the Alienware 15 is currently on sale for around £100 more and offers slightly better build quality and more powerful graphics performance.

For power-hungry, deskbound buyers, the Asus N552VW is a good buy – but it’s far from perfect.