What is the Alienware 15?

Alienware has just re-jigged its gaming laptop offering, ditching its 18-inch and 14-inch models and replacing them with new slimmer 15-inch and 17-inch variants, to add to the Alienware 13 that arrived last year.

Packing the latest Intel processors, top-spec graphics cards and high-quality screens, they’re every bit the premium laptops you’d expect. Plus they both support Alienware’s new graphics amplifier for boosting your laptop’s graphics by way of an external box. Let’s see if the new Alienware 15 adds up to being the gaming laptop of choice at this size.

The one area where Alienware has seldom let itself down is in the design of its products, and it hasn’t tripped up on this occasion either, assuming you’re a fan of having an alien head on the lid of your laptop, of course.

The signature of these latest models is a combination of carbon fibre and aluminium for their construction. The latter covers the whole top surface of the lid, while the former is hidden away in the machine’s construction, below a coating of lovely soft-touch black covering the whole outside. 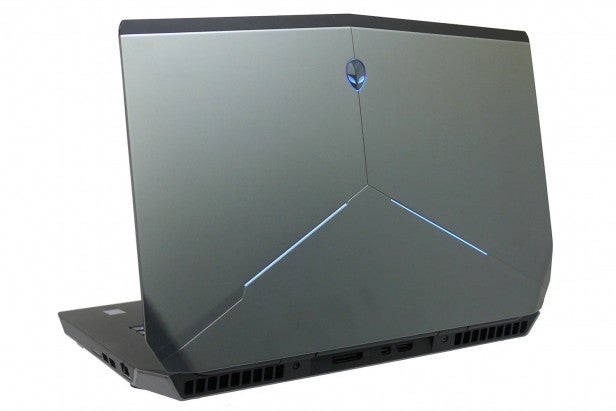 Combined with a keen eye for just the right sharp angles, some just subtle enough lighting and an otherwise minimalist approach you have a laptop that retains a sense of class and quality despite its clearly sci-fi gaming styling.

There are plenty of lights, though, if that’s your thing. There’s the alien head on the lid along with a couple of thin angled strips then another couple of thin strips sit in the front edge while inside there’s another alien head just above the keyboard, the Alienware logo on the screen bezel, the keyboard is backlit and the trackpad surface glows too.

All of these are independently controlled through the pre-installed Alienware software and they can be changed individually to whatever colour you want, as well as being turned off altogether. 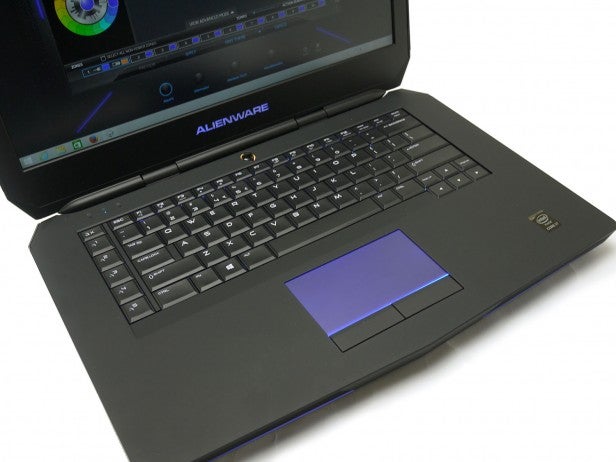 Although slimmer than some predecessor offerings, the Alienware 15 is still a fairly hefty laptop. With dimensions of 385.8 x 270.2 x 34mm it’s only just under an inch and a half thick and weighing in at just over 3kg – our sample was 3.03kg without its power supply – it’s certainly something that you’ll notice whether carried in the hand or slung in a backpack.

However, the very robust construction does mean that you can treat it fairly roughly. For instance, despite its weight you can grab the top edge of the lid to pick the whole thing up without fear of buckling the screen. There is a bit of flex there, but it’s nothing to be concerned about. 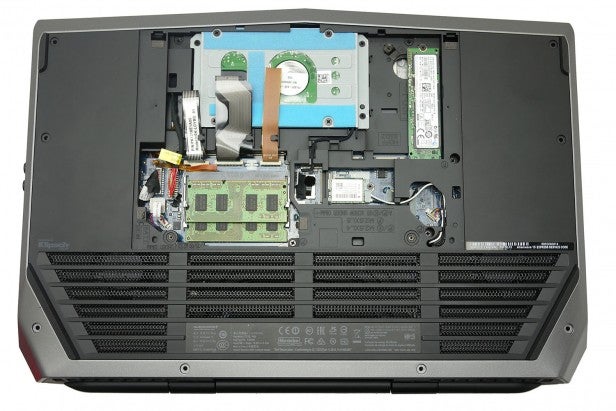 Ripping the bottom off – it does actually require quite a tug once the screws are undone – reveals easy access to the two RAM slots, the 2.5-inch HDD slot, the m.2 SSD slot and the wireless card. It looks like gaining further access to the CPU wouldn’t be too difficult, but we didn’t venture further. Moreover, to have so much already accessible is a great start – buying the cheaper version and doing the upgrades yourself at a later date is an easy option here.

All models come with the same 1920 x 1080 LCD screen that’s an IPS panel with a matte, anti-glare finish and 300-nits brightness. This can also be swapped out for a 4K (3860 x 2146) touchscreen panel for an extra £300. They all also come with Killer wireless networking and a choice of either Windows 8.1 or Windows 7. 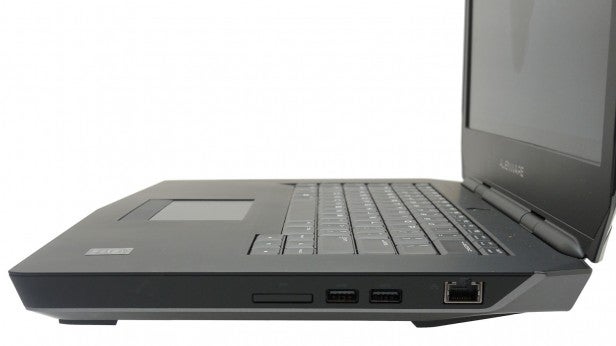 Upgrades are limited to doubling the RAM to 16GB and adding a larger SSD and HDD, with the usual extended warranties and anti-virus software options too.

The one obvious missing feature is any sort of optical drive, with them seemingly having dropped out of favour, even in chunky gaming laptops.

All this lot is joined by a good selection of external connections with two USB 3.0 ports on the right edge along with the Ethernet socket and SD card reader. Two further USB 3.0 ports sit on the left edge next to the headphone and microphone jacks and Kensington lock slot while the back has a full size HDMI, mini DisplayPort and the proprietary Graphics Amplifier port.

The Graphics Amplifier is a £200 box into which you can place any conventional desktop graphics card, providing a bump in graphics processing power for your laptop when gaming at home. We’re yet to review it, but it should be able to provide a graphics boost for most of the configurations possible with the Alienware 15.

The only problem is that the connection between the card and laptop only uses an x4 PCI-E connection, which means it won’t be able to provide the full bandwidth expected by the fastest graphics cards, which rely on x16 PCI-E interconnects. We’ll just have to see exactly what it’s capable of when we review it, though.

Alienware has largely steered clear of the trend for ultra-high resolutions with its latest gaming laptop, choosing instead to equip every model with a 1920 x 1080 resolution screen by default. However, as mentioned, all the models can be optionally upgraded to a 4K (3860 x 2146) touchscreen panel. Although some people will yearn for the high-res option, we suspect most will be quite happy with the 1080p one, particularly as it’s rather good.

The first thing that’s striking about it is the matte finish which really does eliminate any annoying reflections. Then there’s the sheer solidness of the image that comes from the relatively high resolution and tight pixel structure – there’s none of the graininess that you get with some displays. Combined with excellent viewing angles, a lack of backlight bleed and not a hint of patchiness to its backlighting and you have a display that just looks very solid and uniform. 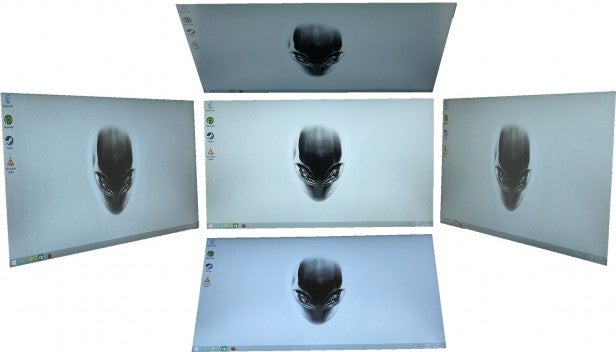 Colours are also accurate and vibrant, while maximum brightness is plentiful. Black levels are also top notch – good stuff all round.

The most serious of gamers may want a higher refresh rate display – this is a standard 60Hz IPS screen – but we’d take a better quality panel every time.

When it’s comes to audio the Alienware 15 isn’t quite so accomplished, though it’s still very good. Its speaker system is provides plenty of volume and clarity, with good high-end detail and mid-range warmth but bass is a little lacking for such a chunky laptop.