You don’t need to spend £1,500 on a high-end gaming laptop to get solid gaming performance. The most desirable, most monsterous notebooks may make all the headlines, but it’s the machines a couple of rungs down the ladder that provide the best bang-for-buck. As such, the Asus N55VW looks very competitive.

The unit tested here is one of the top-spec variants of this particular model, which has the catchy full name N552VW-FI043T. It has a high-end Intel Core i7 processor, gaming-capable Nvidia GeForce GTX 960 GPU, an Ultra HD screen and a 128GB SSD paired with a large, 2TB hard disk.

Video: TrustedReviews explains the difference between laptops and tablets

The N552VW looks and feels just a little cheaper than it actually is. The lid is coated with a dark grey, metallic material with brushed concentric circles fanning out from the backlit Asus logo. The edges taper off slightly, but at nearly 3cm thick there’s very little that Asus can do to hide the fact this is a chunky laptop.

Open it up and the slightly flabby design continues. The rounded corners and neat edges look fine, but the huge 18mm bezels hamper its overall visual allure.

The gradually radiating dots on the top corners of the keyboard – presumably to draw attention to this laptop’s audio credibility – spice up what is otherwise a sea of silver plastic.

It’s heavy, too, weighing in at 2.53kg without the power brick. It’s not back-breakingly bad and hardier buyers should be able to carry it around in a backpack without too much bother, but in a world filled with lighter, compact laptops with only a little less power, the N552VW feels a bit old-school – and not in a good way.

There’s a decent amount of wired connectivity around the edges of the N552VW. On the right, you get two USB 3.0 ports alongside a 3.5mm combination headset jack and a DVD drive. On the left, there’s a third USB 3.0 connector and a USB 3.1 Type-C connector capable of a theoretical maximum throughput of 10 Gbit/s, if you have any peripherals that support it.

Also on the left is the gigabit Ethernet port, an HDMI port and a DisplayPort connector, meaning you can easily set up a pair of external displays while also keeping the laptop’s built-in display active. Finally, an SD card reader sits on the front edge.

Asus ships the N552VW with a 128GB SATA SSD and a 2TB hard disk. 2TB is more than enough for a decent-sized media collection, although the 128GB SSD won’t be large enough for big Steam game libraries, so you’ll have to manage where your games are stored fairly carefully.

Both sticks of RAM can be replaced, as can the 2TB hard disk. However I had a lot more trouble gaining access to the rest of the laptop’s innards and wouldn’t recommend doing so unless you’re prepared to void your warranty and damage your laptop. 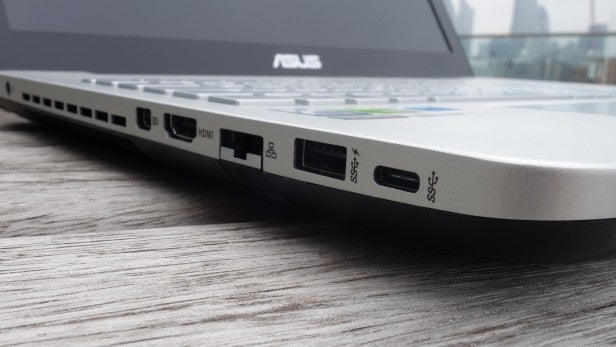 The built-in keyboard is chunky and reasonably grippy, with a fair amount of travel. I didn’t find it leant itself to ultra-fast typing simply because the amount of travel and force required for a keypress is fairly high.

There’s a full numberpad (albeit slightly squashed) on the right side, while the top row of F-keys have alternative functions, activated by the Fn button. F3 and F4 have been left blank because they would normally control the backlit keyboard, which the UK model does not have. Media buttons such as Play and Skip are found on the arrow buttons as Fn-activated functions, which annoyingly require two hands to use.

The touchpad is a mixed bag. Its strongest suit is that it supports the majority of important Windows 10 gestures, including window selection and Cortana. It doesn’t feel as precise as laptops fitted with a Microsoft-certified Precision Touchpad, however.

It’s not bad, by any means, but you occasionally feel a very slight disconnect between what your fingers are doing and what’s happening on-screen. The physical click is fine, if a little rattly, and I rarely had any issues with its overall reliability.

Asus’ choice of display is a curious one. It’s a 3,840 x 2,160-pixel panel, meaning everything is super-sharp and high-resolution content looks fantastic, but in most general usage situations you’ll rarely see the benefit.

In order for on-screen items to be remotely legible, Windows’ display settings need to be set to scale up by 250%. What’s more, while the graphics card is eminently capable, it only offers good gaming performance at Full HD resolutions and below, so such a high-resolution screen seems like overkill.

With that said, photographers will definitely appreciate it. You’ll be able to see more of each of the shots you take in higher detail, meaning you won’t have to zoom and pan around your snaps so often.

Actual screen performance is reasonable. It’s relatively bright at 260nits, although this is generally eclipsed by higher-end screens, and its 0.27nits black levels equate to nice, deep blacks when playing atmospheric games.

I did find the screen erred towards rather crushed blacks and greys at times, which reduced detail in some scenes. Colour coverage is reasonable, too, with the screen managing to cover 97.5% of the sRGB colour gamut, and accuracy is rated at a delta E of 6.7, which isn’t particularly great, but perfectly fine for non-professional use.

Used as our main laptop for the review period
Tested for at least a week
Used consistent benchmarks for fair comparisons with other laptops
Reviewed using respected industry benchmarks and real world use
Next
Performance, Battery Life and Verdict Review