What is the Archos GamePad 2?

The Archos GamePad 2 is the French company’s second attempt at making an Android gaming tablet. The first GamePad was a disaster in so many ways. From the cheap look, buggy software and the lack of Android games that could truly benefit from physical controls. In its second coming, the GamePad 2 rights some of the biggest wrongs of the first GamePad but it’s still not perfect. For almost £180, it’s still difficult to justify recommending the Gamepad 2 over a Nintendo 3DS or PS Vita. 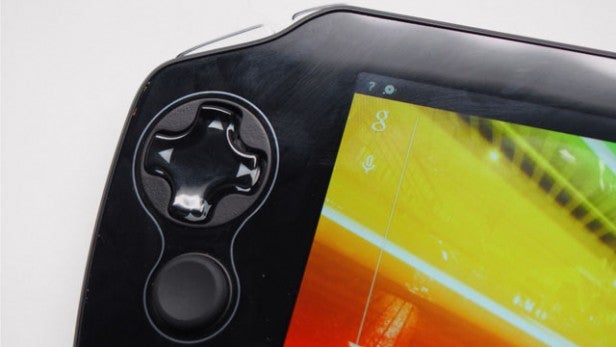 If there was anything the GamePad really needed it was to get rid of that naff-looking grey plastic build. Thankfully, it’s now been replaced with a slick-looking glossy black top layer and the screen surround now joins seam-free with the actual screen. The plastic back now has a more grippy, textured feel making it more comfortable to use for long periods of time.

Weighing in at 400g, it’s slightly heavier than the first GamePad (330g) and at just 9mm thick and is a significantly less bulkier affair than the Wikipad. It’s so much better to look at second time round, although it lacks some of the polished good looks of the Vita and 3DS.

Minor tweaks have been made to the physical controls where some are more noticeable and more necessary than others. The awful PSP-like analogue buttons have been ditched for more concave and slightly raised sticks. The D-pad is now one whole button and face buttons (X,Y,B,A) are circular instead of little triangles. The transparent shoulder buttons are broken into two buttons no doubt to make up for the lack of triggers. 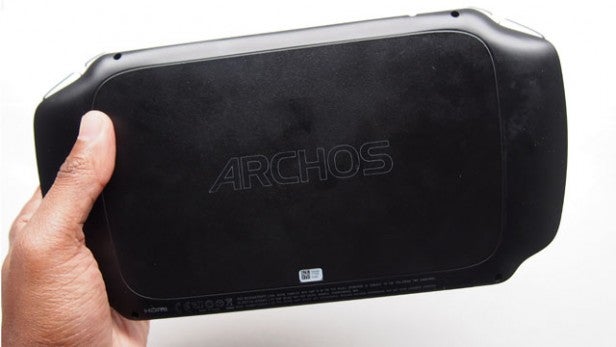 Changes to the D-Pad and face buttons certainly make the GamePad 2 fit more snug in two hands and offer better response. The analogue sticks work better for first person shooters, although the restrictive directional movement sometimes make it difficult to aim quickly and accurately. It’s all too easy to press the smaller part of the divided shoulder buttons when you are frantically trying to shoot quickly as well.

Elsewhere, the stereo speakers, start and select are still in place and across the top edge you’ll find from left to right the micro USB charging port, 3.5mm headphone jack, micro HDMI port, volume rocker and standby button. There’s no 3G version at present, and no GPS, but you do get Wi-Fi, Bluetooth and a pretty average front-facing camera.

The all-important microSD card is situated at the bottom corner of the body. We say important because as you’ll soon find out if you have the 8GB (£179) version like we did, it only takes a few Gameloft games to hog up the remaining space. 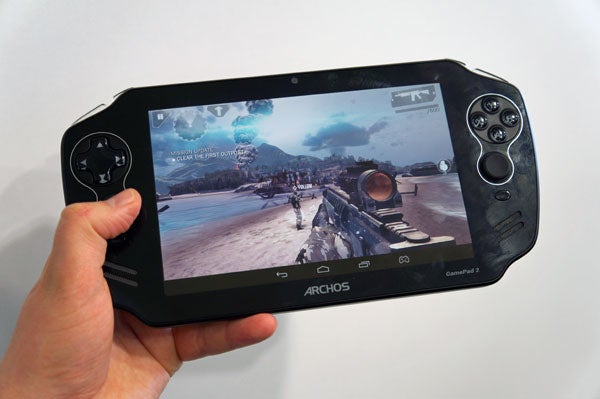 The lower resolution screen is pretty evident in games. Playing Asphalt 8 and Modern Combat 4: Zero Hour the jagged edges of the objects are evident in a way they simply aren’t on a higher pixel density screen. Contrast and colour tone are both well represented and certainly a step up from first GamePad though.

Gaming indoors is clearly the best environment as the screen surface is pretty reflective. When you are using the GamePad 2 just as a standard Android tablet, watching HD video on YouTube or on web pages it’s reasonably sharp and viewing angles are good.

It just seems to lack the real punch of colours you get on the Nexus 7 2 or the Kindle Fire HDX 7. Screen responsiveness is good as we’d expect so you’ll have no problems playing touchscreen-based games when you need to take a break from the controls.

With all of the minor compromises considered, the screen is still light years ahead of the original GamePad even if doesn’t manage to outperform the best 7-inch Android tablets.

Elsewhere, the two stereo speakers are surprisingly powerful and loud yet lack clarity when you crank up the volume. The Kindle Fire HDX 7 has set the bar for tablet speaker quality and the GamePad 2 falls short of the Amazon tablet’s warmer, more detailed sound.