If there’s one thing that Apple Watch is not short of, it’s apps. The official number is around the 3,000 mark and it’s rapidly growing by the day. That wipes the floor with what was available for Android Wear, Pebble and Samsung’s Tizen platform when they first launched. Most of the big names are here like Twitter, Uber, Endomondo, along with Apple’s own native applications.

Getting the apps onto your Watch is done via your phone from the Watch app. If you already have apps that are compatible with the Watch, they’ll already be pulled through and ready for you to push them to Watch. All of the downloaded apps live inside the Watch app and you can toggle whether the app is shown on the Watch app homescreen. Where it’s supported, you’ll also have the option for the app to appear in the widget-style Glances.

These are all scaled down versions of the phone app and in many instances you’ll still need to do the setting up on your phone before they can work on the Watch. Apps can be a little slow, buggy or in the case of an app like Uber, doesn’t even work at times. 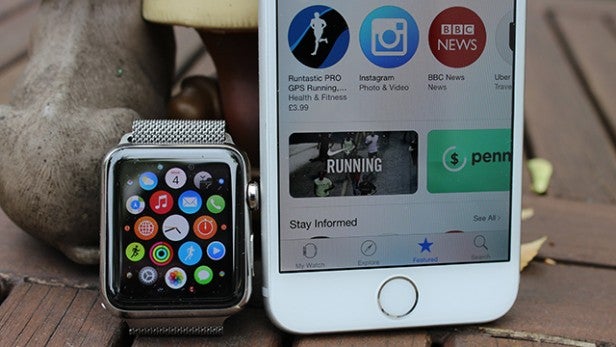 As noted earlier, sending notifications to the Watch is inconsistent as well. It also doesn’t take very long to notice that there’s a clear divide between the way native and third-party apps function on the Watch. Unsurprisingly, there’s better support for the Watch’s unique features with Apple’s own apps.

The best example to illustrate this is Runkeeper and Apple’s own Workout app. While lifting your wrist to view progress on the native fitness app will let you quickly glance at progress, Runkeeper requires going back into the app homescreen to open it. Trying to do that when you’re out running is not easy.

As far as apps that really stand out, it’s mostly Apple’s that make a good impression. Navigation, which relies on your iPhone’s GPS signal, is generally good but the signal can drop out despite working on the phone. The messaging and email apps are the ones that make most sense on a watch and keep things nice and simple. Passbook works a treat on the Watch’s small screen and the music app deserves a mention as well. Here you can control music whether it’s from the main Music app or from Spotify. You can also import playlists, although bizarrely it’ll only sync to the Watch when it’s charging.

Apple has done the hard part by convincing so many to create apps for its smartwatch. Now it needs to make sure those third-party apps flourish the way native apps do because that’s where it’ll gain those truly killer features. Right now it doesn’t feel like that. Hopefully, in time that’ll change. 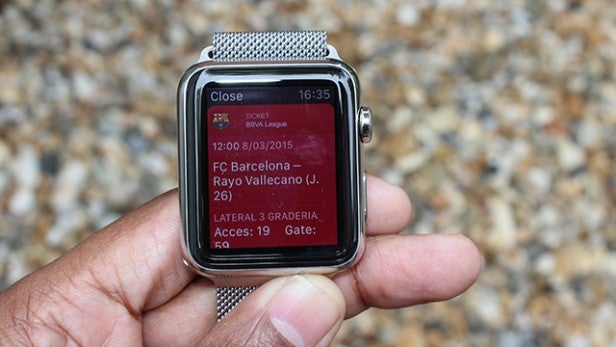 There are clearly some software kinks to sort out then, but what about the burning question of battery life? This is the one major detail Apple managed to gloss over when it first announced the Watch. We now know that there’s a 205 mAh battery concealed behind that luxurious stainless steel body, but is it enough to get you through the day?

It’s smaller than what you can find inside Android Wear like the Samsung Gear Live (300mAh) and Pebble smartwatches, but Apple claims you can get 18 hours and that’s exactly what you can expect to get from it. You could call it a day and a half at most, but that still means you’ll need to have the proprietary charger nearby to get it to the end of the following day.

If you want the Watch to go longer, there’s a power reserve mode you can activate. You’ll also be prompted to turn this on when the battery reaches the critical 10% battery level. This disables all of the smartwatch features leaving you with a significantly dumber watch. That’ll see you through two days maybe more, but when you can’t do anything apart from tell the time. 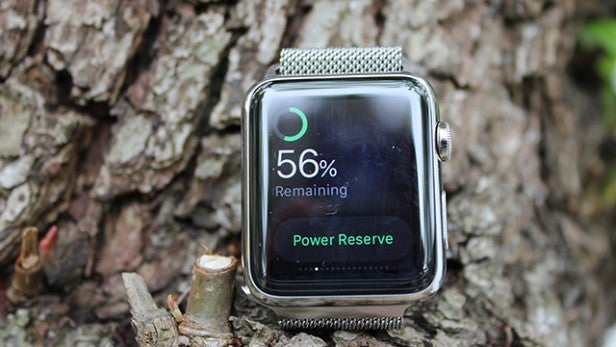 In general use with no restrictions on notifications being sent to the Watch, and using features like navigation and the music player for short periods of 20-30 minutes a day, the Watch battery drops to 50% by 5pm. In more intense use, it can fall to as low as 32% by 4.30pm. If you take it out for a run for just over an hour, it can drop by 32%. That was the consistent pattern over nine day use – I didn’t have to charge the Watch during the day at all, only at night.

What’s more concerning is the drain on iPhone battery life. A typical day of browsing the internet, checking in on Twitter and Facebook and streaming music offline on Spotify during morning and evening commutes can drain an iPhone 6 to as little as 22% by 5pm. On the days of extreme testing it was so bad that the phone dropped to 8% before 5pm and had to be charged up again. The iPhone 6 Plus aside, iPhones aren’t renowned for great battery life and the demands of the Apple Watch doesn’t help.

The one obvious thing to do to reduce the chances of the Watch sapping the battery life out of your iPhone is to toggle off the apps sending notifications in the Apple Watch app. You should see a noticeable improvement. If you don’t care about the fitness features all that much, turning off the continuous heart rate sensor and other activity tracking features will help, too. If you’re not willing to give up those features, then you’re definitely going to have serious battery issues. 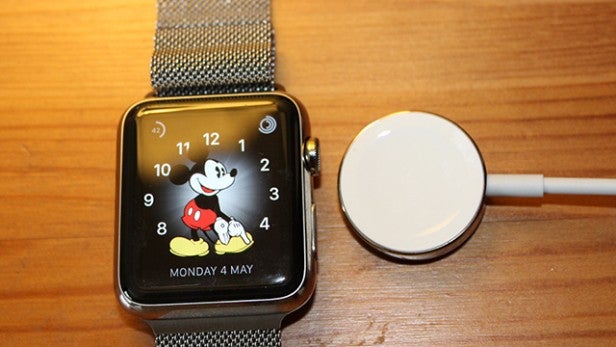 When you do need to charge the Apple Watch you’ll need the dedicated charging cable to hand – you can’t use a standard Lightning cable. The small, sleek cradle is as beautifully constructed as the watch and magnetically clips onto the back of the Watch where the heart rate sensors lie. Apple uses a MagSafe inductive charging method that’s very similar to QI standard wireless charging, although it didn’t work on the Ikea Varv wireless charging lamp we reviewed recently when you clip off the watch straps.

As you’ll no doubt need to travel around with one stowed in your bag, Apple has included a plug with folding pins for a more compact fit – that’s the UK version at least.

The Apple Watch is not exactly rapid charger, though. It takes over two hours to charge from 0 to 100%, which is noticeably slower than other smartwatches.