So Apple has more or less nailed the hardware. The Apple Watch looks good, has a great screen and is very comfortable. It will live and die on its software, though, and the Apple Watch feels like a first generation product. Apple, rightly or wrongly, has a reputation for easy to use software, but the Apple Watch isn’t easy to use.

Even the setup is rather fussy. It takes a good 25-30 minutes to setup the Watch and its companion app so you can start using it – it’s trivial in the greater scheme of things, but also frustrating. Needless to say, the Apple Watch only works with iPhones, specifically the iPhone 5S and upwards, so iPhone 5 and 5C owners are out of luck. 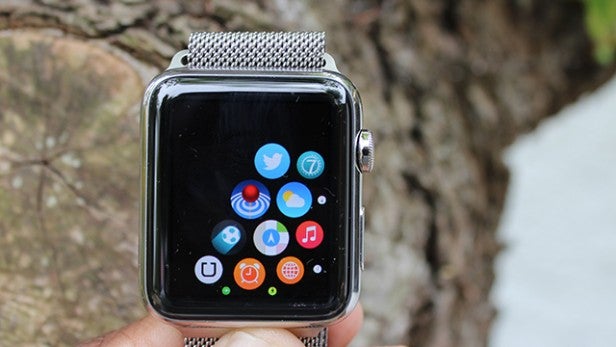 Once setup, there’s no escaping the feeling the Apple Watch is clunky and unintuitive. You’ll accidentally swipe a screen when you can’t or press the Friends button instead of the crown for a while. The relationship between iPhone and Watch adds to the confusion as well. It’s all a little bit chaotic. It’s a steeper learning curve than Android Wear, which definitely has its own software issues to resolve.

It starts out in a familiar way. There’s a drop down notification bar and a Control Center you can view from swiping up on the touchscreen. But the app homescreen is completely different – it’s looks a bit like a level from Bubble Bobble with all of its floating app icon bubbles. These can be rearranged from the Apple Watch phone app. 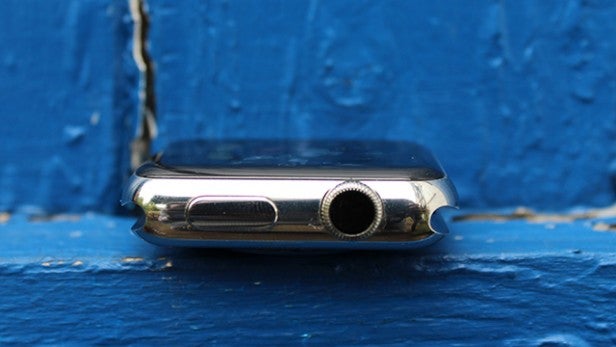 Digital Crown & Taptic Engine
Key to navigating this interface is the Digital Crown – a modern take on the traditional crown and a unique approach compared to Android Wear alternative. This means navigation isn’t based on the touchscreen alone. It’s main and most useful function is twisting to zoom into a map or scroll through a text message, as using the crown won’t obscure what you’re looking at. You can push to jump to the app home screen or hold down to activate Siri.

It isn’t as revolutionary Apple makes out, but the Digital Crown does work really well. The only troublesome application of the crown is when you need to zoom into apps on the app homescreen. Trying to be very precise when there’s a lot of apps on the homescreen can be very tricky. As you add more apps it gets harder and more fiddly to pick the right one. You can use the crown to zoom, but trying to select an app in the zoomed out in view is frustrating.

Something we don’t have a problem with is Apple’s Taptic Engine. Android Wear watches and activity trackers use similar technology to give you a nudge when you haven’t moved around for a while. Apple uses the technology in a similar way, but also has some unique uses for it like helping to guide you in the right direction when using navigation. When you need to turn right, it’ll send a gentle purring vibration on the right of the screen. It’s a clever feature that’s very effective. 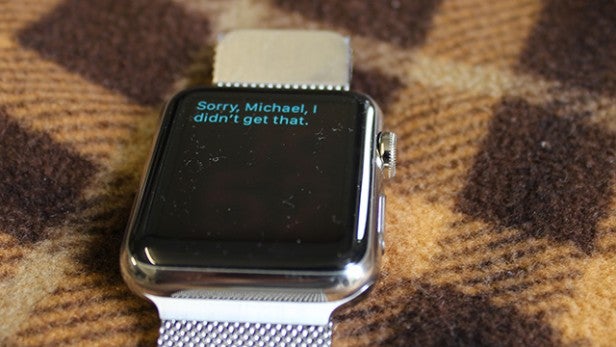 Siri & Voice Control
Like Android Wear, voice control plays an important role for Apple’s smartwatch. It doesn’t feel as overbearing as it is on Android Wear, but it does offer an easier way to get the information you need, which is essential when you’ve got such a small screen to play with.

It does many of the things the digital assistant can do on the iPhone. Pressing and holding the digital crown activates Siri where you can ask it about the weather, get it to search for items, or push you straight through to apps.

From a reliability point of view, it does have its bad moments. If you keep the requests simple, it’s fine. As soon as you get a little more complex, it begins to have problems. The mic sensitivity means that if several people around you are talking, it can have a tendency to pick their voices up too. It can also be a little slow to analyse requests that you’ll end up repeating and it’ll pick up the repeated request as well. 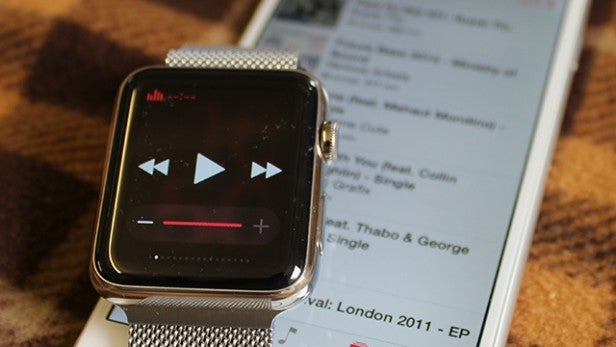 Glances, Friends & Messaging
The next big software feature is Glances. This is a stream of widgets pulled in from downloaded Watch apps. These can be turned on within the Apple Watch app. You can view Glances by swiping up from the bottom of the screen.

Twitter is one of the first apps to support Glances, condensing activity into top trends. If you want to explore more than what’s popular at the moment, you can launch full Watch app with a simple press. The ECB cricket app’s Glance support works well, pulling in latest scores, while the Shazam integration is well suited to quickly recognize a song. It would have made more sense adding additional homescreens for homescreens instead of breaking it away from the main user interface, but it’s definitely one of the Apple Watch software features that shows great potential.

It’s here where you can also find shortcuts like toggling Bluetooth on/off, activating Airplane Mode or turning on the Do Not Disturb mode. It’s also where you’ll find music playback controls, which work seamlessly with third-party apps. 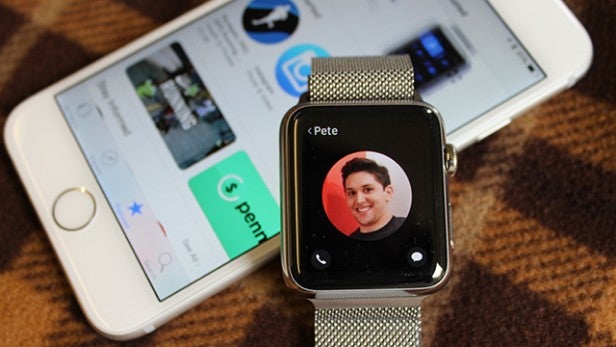 Last up is Friends, which is activated using the dedicated button below the Digital Crown. This lets you store your favourite contacts for quick access. You can add Friends from the Apple Watch app to build the circle of friends with whom you you can send quick messages, audio files and even make voice calls easily by pressing the button whenever you want.

Messages have a series of quick replies, which can be customized in the Watch app. This is a useful way to quickly reply to messages in a hurry – i.e. you can say “I’m 5 minutes away” or “I’m in a meeting” at the touch of a button, rather than stopping to compose a message. iOS has this feature, too, but it’s a more important on the Apple Watch and a useful way to dismiss incoming calls and messages until you’re ready to deal with them.

Sadly, the Siri-powered audio files struggle for accuracy at times and voice calls are not brimming with clarity. You’ll need to raise your wrist close to your ear to hear the other person on the line. There’s no way of blocking ambient noise, so if it’s tough to take calls when the wind picks up. 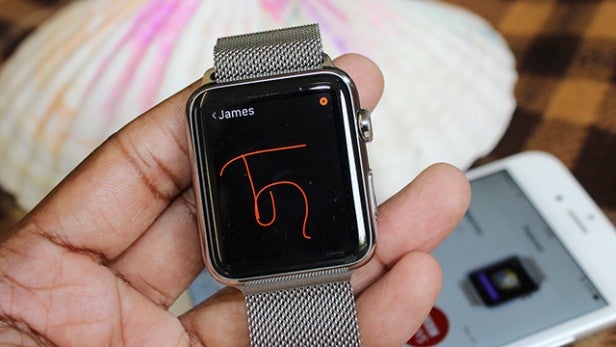 Undoubtedly one of the more gimmicky features that lives in the Friends section is one that can only be used between Apple Watch users. Digital Touch lets you send small messages, emojis, drawings, a tap and even your heartbeat. The feature is built into the Friends section and once you’ve sent them there’s no calling them back.

Sending a heartbeat is the most difficult to master. The screen is too small to really get creative or detailed with the doodling tool as well. It’s fun but as we found, the messages don’t always arrive instantly on the other person’s Watch, which rather spoils the fun. 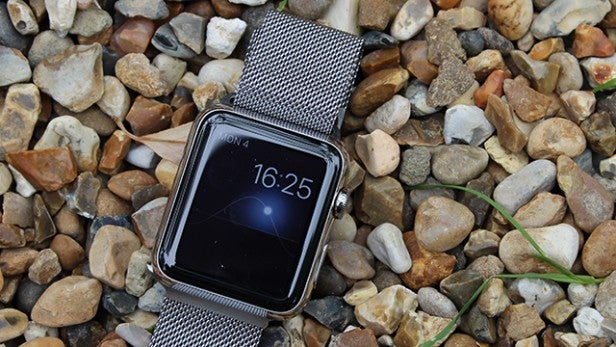 Watch faces & Notifications
One of the nice things about a smartwatch is customising the watch face – it’s impossible on a normal watch, after all. You get a choice of ten at the moment – my current favourite is the Mickey Mouse one, but it’s a reasonable selection to start with. Apple has banned watch face apps from the App Store for the time being so you can’t download new ones, but that policy is bound to change in future.

Notifications will form your most regular use of the Apple Watch, but we had serious problems with them that underlines many of the issues of the Watch OS. Only text messages, Activity updates and digital touch notifications work reliably, with alerts for other applications not coming through despite being selected to do so in the Apple Watch app. If you go into the dedicated apps in the app homescreen, emails and notifications have been delivered. It seems we are not the only ones to experience this problem if you check the Apple online forums.

This is one of the many ways the Apple Watch feels underdeveloped. Software tweaks could solve, or at least reduce, many of the issues with the Apple Watch, but you’ll need the patience of a true Apple devotee to tolerate many of them at this stage.