What is the Ikea Varv?

The Ikea Varv is a table lamp that also features a wireless charging pad to power up smartphones such as the Samsung Galaxy S6 and S6 Edge, which both support cable-free charging. It’ll also work with an iPhone 6 and older Samsung Galaxy phones via an additional charging case.

It’s part of the Swedish furniture maker’s new wireless charging range, which also includes small bedside tables, floor lamps and charging pads that can be integrated into existing items in your home.

Priced at £50, the bedside lamp is £20 more expensive than Samsung’s official wireless charger. However, if you’re willing to spend that bit more, you’ll get the best-looking wireless charging solution we’ve come across that works without issue. Is it quicker than charging from the mains, though? Sadly, not. 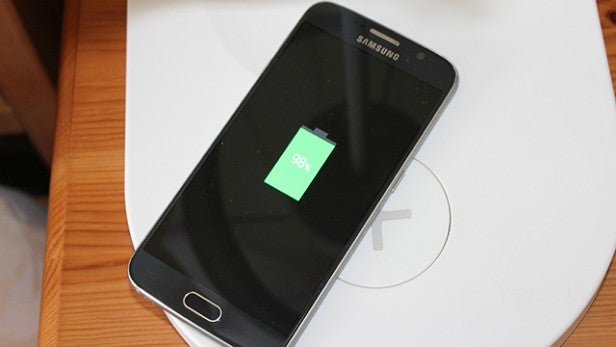 If you’ve used a wireless charger before then the likelihood is that it looked like a slab of plastic a little bigger than your phone or a small circular coaster like the official S6 one. When Nokia launched its wireless charging pillow a few years back, it was the first sign of a phone company creating a wireless charging solution that was a little more pleasing on the eye.

With the Varv, you’re getting a considerably more attractive solution that, in typical Ikea fashion, keeps things simple. It’s all white with a matte finish on the polycarbonate plastic base and a shade made from nylon and polyurethane. It measures in at 52cm high with a 28cm wide shade so it’s about the same size as an average bedside lamp. The cast iron base and painted steel frame forms the solid foundations and ensures it doesn’t feel cheap or nasty.

What will take up a little more bedside table space than usual is the large base which the charging pad is built into. It means you have enough room to place your phone horizontally or vertically on the circular charging pad with the big cross to mark the charging spot. There’s also enough space to throw your keys or wallet on there as well and not have to worry about freeing up space for your phone. 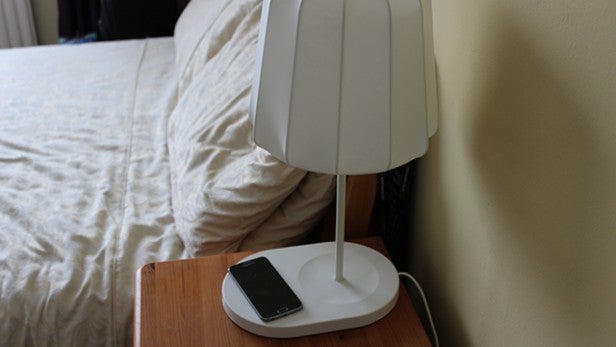 This charging pad is QI certified, which means it’s compatible with QI-certified phones. QI is the most common wireless charging standard, used by the majority of smartphones. It uses a combination of magnetic fields and inductive transfer between metal coils in the charging plate and in the phone to create a connection and remove the need for a cable.

If your phone doesn’t support wireless charging you’ll have to by a Vitahult wireless-charging cover. These clip-on cases are currently available for the iPhone 4 all the way to the 6. For Samsung users, it’s also available for the S3, S4 and S5 and will require removing the back of your phone to use. The cheapest is the S4 one (£10) while the most expensive is the iPhone 6 (£20).

Like most wireless chargers, the Varv has a maximum power induction charge of 5W, which means it’s designed for gadgets such as phones and smartwatches that require low-power charging. There’s the added bonus of a USB port that sits at the from of the lamp’s base, so you still have the cable option or the ability to charge two devices at once. 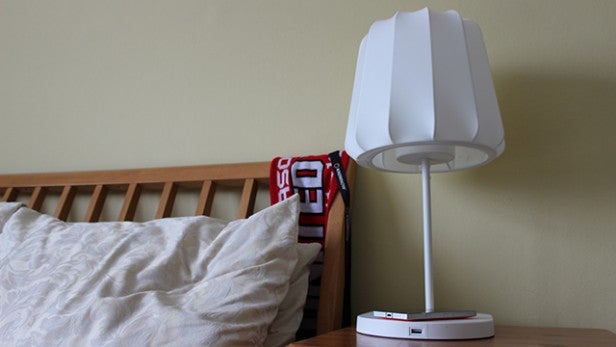 Being an Ikea product, it’s pretty easy to put together. There are three main parts in total with the lamp and the base the two core ones. A big washer and nut secure the lamp into the base with the supplied spanner. Once you’ve tucked away the power cable, the plastic cover clips on top. All that’s left is to screw in an E27 fitting light bulb and you’re good to go.

X marks the spot for where you need to charge, with a small light flash indicating that it’s ready to power up your tech. Your phone has to sit on top of the cross entirely to begin charging. You’ll know when it’s on correctly when the light on the plate stops flashing. You can’t simply chuck it anywhere on the base. It’ll be great when we do get to that point, but we’re not quite there yet. Companies such as Intel are working on it though.

We used a Samsung Galaxy S6 and a Nokia Lumia 930 to test how well the Varv works. Wireless charging is still more about convenience than speed, which means charging is slower than from the mains. A 40-minute charge adds 15% battery on the S6 and the 930. When you compare that to the S6’s new fast charging technology packed into its supplied charger, you can get up to 50% in the same amount of time.

If you own a Moto 360, then it’ll work just fine with the charging pad as well. Charging speed equals that of Motorola’s dedicated charger, getting you back to 100% in an hour. 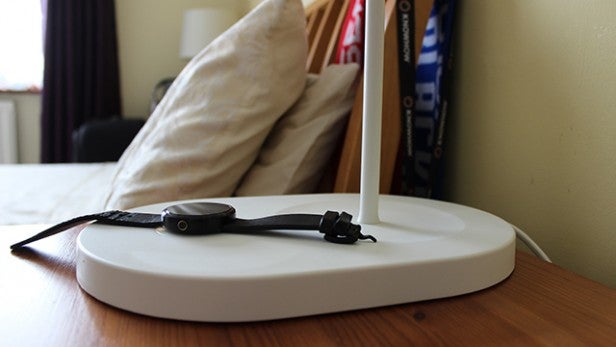 Should I buy the Ikea Varv?

If you’re sold on the convenience of wireless charging and reducing the cable clutter, then the Varv and Ikea’s entire range will appeal. It’s better looking than most other wireless chargers and it’s not outrageously priced for something that’ll blend better into your surroundings.

iPhone and older Samsung Galaxy smartphone owners might think twice, as they’ll need to spend more to make it work. It’s also slower to charge than from the mains, although it’s easier to do when you get in from work or don’t want to forget to charge it overnight.

Ikea’s range could be the move to spark more wireless charging furniture, but it’ll need to get as quick as Qualcomm and Samsung’s own rapid charging technology before it’s truly useful to have dotted around your home.

The Varv is the most attractive wireless charging solution yet but it’s still not the quickest way to power up your smartphone.