Along with navigation, fitness is a major play for Apple with the Watch. It made a big deal about getting model and marathon runner Christy Turlington Burns to train with it for the London Marathon and blog about it on the Apple website. It recruited a designer that worked on the Nike Fuelband and even gave the world a glimpse into its secret fitness labs. With all that build up, it needs to deliver on this count.

Fitness tracking on the Watch relies on three sensors to deliver the data. First up is the built-in three-axis accelerometer. This is standard fare for pretty much every activity tracker on the market – it’s what tracks your steps and so forth. The Apple Watch also uses your phone’s GPS signal to record location data when you’re out and about, though that means you need your phone with you to track a run accurately.

The last sensor is the heart rate sensor. At the core, it works in a similar fashion to the optical, light-based heart rate sensors we’ve seen on other trackers like the Fitbit Charge HR and Mio Fuse. But Apple is doing things slightly differently by adding infrared and photosensors to the flashing LED lights to detect blood volume and deliver accurate data. 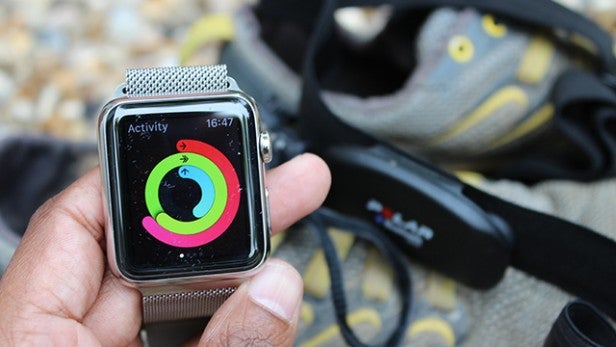 Along with third-party app support from the likes of Nike and Runkeeper, Watch Health and Fitness is broken down into two apps. The first is Activity, which is your daily activity tracker. You can view calories burned, distance covered and steps. It additionally logs data on how long you’ve been standing for and exercise data from the Workout app, which is the other Apple fitness app. Data is displayed by a group of coloured circles giving you a quick and easy glance at progress.

Tracking is one part – the other is motivating you to keep active. This is done in a way where small gains will hopefully lead to bigger changes. When you’ve not been moving, you’ll get a little vibration on the Watch telling you to get up and move for a minute. It works. Every time the message came through, we felt it wasn’t much of a chore to get up and move for a minute. All of the goals can be adjusted by pressing down on the screen when targets are being passed with ease.

Wearing it with the Jawbone UP24, step, distance and calorie count was consistent. It’s still the casual kind of tracking that’s not 100% accurate, but it’s good enough. The Apple Watch fares better than most trackers at convincing you to keep moving and that’s important in our book.

You’ll need to turn to the Workout app for tracking proper exercise sessions. Here you can record a range of activities, including running (both indoor and outdoor), cycling and gym activities like jumping onto the rowing machine or stair stepper. It’s a very basic app where you can set goals based on calories, distance and time. 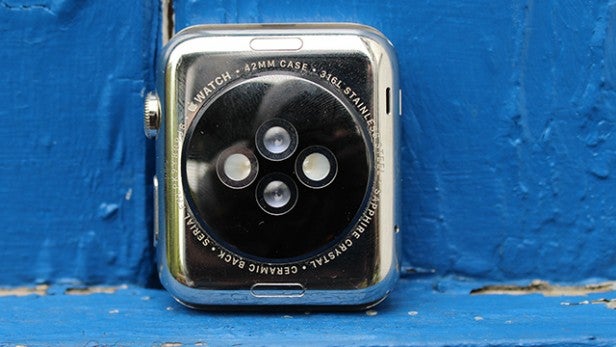 During a workout, you can quickly and easily swipe the bottom section of the display to change the data display. The last recorded workout will be displayed alongside the activity, but you’ll need to go back to the Activity iPhone app to view previous history. Even then the app could be more informative and provide some better analysis than it currently does.

Workouts brings the heart rate sensor and accelerometer sensors into play. The latter comes into action for those indoor activities and does struggle for accuracy in the several times we tested it. It’s less of a problem when you’re outdoors and have to take your phone out with you.

What’s more concerning is the heart rate sensor performance. Taking the Watch out for a five-mile run indoors and an hour run outdoors, we put it up against the extremely reliable and accurate Polar H7 heart rate sensor chest strap. There were no dropouts, but the inaccuracies raise questions about how reliable these fitness features really are. 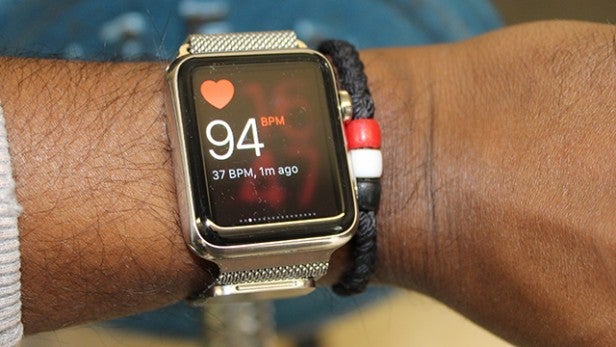 On a treadmill run, it takes a few minutes to even pick up a reading. For the first three miles, the beats per minute readings (BPM) were significantly higher than the H7 sensor, as the below data illustrates. The average normally works out correct, but won’t be enough for more serious trainers.

After 3.5 miles, the erratic readings disappeared and readings were more consistent. It was the same story testing it outdoors. It takes a couple of miles to obtain the right reading, but that’s not much use to someone planning to do some dedicated heart zone training if readings are wrong.

It fares better with distance tracking. We compared it to Runkeeper running on an iPhone 5 and the TomTom Runner sports watch and this is where pulling through the GPS signal from the iPhone pays off, though it does mean draining your phone’s battery in the process.

Overall, the fitness experience on the Apple Watch is good but by no means ground-breaking. The apps are simple enough to use but there’s definitely issues, notably with the heart rate tracking and just the simple act of reviewing data. With Activity and Health apps both consuming your data, neither really give you a good breakdown of single workouts. There’s definitely work to be done here. 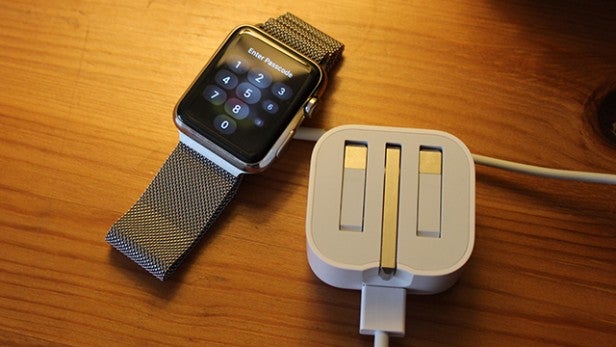 Should I buy the Apple Watch?

Not right now. Loyal Apple fans with money to spend can tolerate its issues, but it’s for early adopters only right now. Those that do will find the Apple Watch is the most beautiful smartwatch around – it’s head and shoulders above anything Google and its Android Wear partners have come up with. It isn’t as good-looking or as fashionable as £600 designer watch, though, and the software needs work to meet Apple’s usually high standards.

If you’re used to picking up an Apple product and working out how to use it in minutes the Apple Watch will disappoint you. It feels like Apple has adopted the Samsung approach of throwing everything including the kitchen sink into a device. Things need to become a lot simpler for the next Apple Watch. Granted this is a first generation Apple product, and even the iPad wasn’t perfect. But the Apple Watch lacks the polish we normally expect of Apple, while some of features feel superfluous gimmicks.

It’s perhaps the contrasting experiences of using Apple’s own apps and third-party ones that’s really surprising. If the Watch is going to make use of the already tremendous app developer support, Apple needs to help them work much better on the Watch.

There’s some performance issues to deal with here as well. Apps are slow to load, Navigation is a little buggy and heart rate tracking has accuracy problems. Then there’s the battery life. While there’ll inevitably be some that’ll come to terms with charging their iPhone and the Watch every night. For the rest of us, this lags even behind pretty much every Android Wear watch where we have made the very same complaint.

If you’re buying a smartwatch for the first time, then your money is better spent elsewhere. The LG G Watch R remains the standout smartwatch and the best showcase for Android Wear so far. It strikes a good balance between design and a software. Like the Watch OS, it’s not the most intuitive, but the Google Now influence makes much more sense. It’s easier to justify buying one as well when it doesn’t cost the same as two PS4 consoles – it’s much cheaper than the cheapest Apple Watch Sport, too.

We’ve only had hands-on time with the Pebble Time and Pebble Time Steel, but everything we’ve seen so far suggests Pebble is providing the most compelling argument that smartwatches do serve a purpose. It might not have a beautiful touchscreen display like the Apple Watch or the same luxurious build quality. But it doesn’t attempt to be a Rolex or a Tag Heuer, either. It’s a smartwatch that keeps things simple with an operating system and more contextual software that makes more sense than Apple’s overloaded approach.

Apple, like many others, is well wide of the mark with its first smartwatch. It doesn’t make life much easier and feels like it’s looking for problems to solve that don’t exist for most people. It will no doubt get better in its second or third incarnation, but Apple has lots of work to do to get there.

The Apple Watch is a beautiful smartwatch but it’s no closer to selling a smarter watch than any of its rivals.