Technically a great home security solution, but the higher-resolution Ring Video Doorbell 2 is a now a better choice.

What is the Ring Video Doorbell?

The Ring is a clever twist on more traditional internet-enabled security cameras such as the Netgear Arlo. As well as providing motion-responsive video recording and alerts, it also replaces your doorbell.

This means you can have bell presses show up on your phone, and install multiple extra bells throughout your home, so you’ll never miss a visitor again.

With the ability to talk back to visitors via your phone, you can also leave instructions for couriers or inform friends and family of your whereabouts if they come calling.

The Ring isn’t unique in providing this selection of features, but it is among the most well integrated and easy to use. So should you invest in a digital doorbell?

The Ring makes a good impression by including a full selection of tools and accessories for mounting it. Not only do you get screws and Rawlplugs, but also a mini spirit level, a two-ended screwdriver and even the right size of masonry drill bit. The only extra thing you’ll need to install this device is a drill. 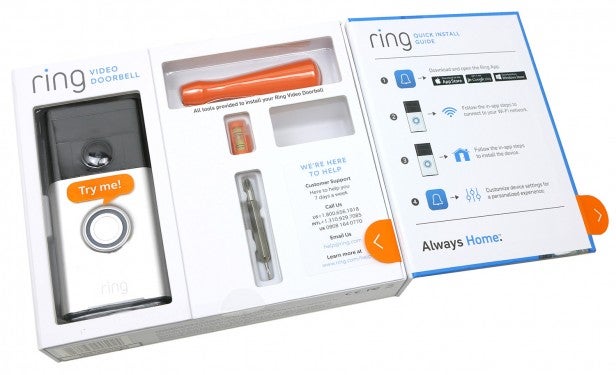 That little bit of extra effort by Ring makes all the difference for those who may not have a particularly well-stocked tool kit.

The installation process itself is pretty straightforward too. If you’ve got an existing powered doorbell you can simply swap out the old bell button and replace it with the Ring, using the old wiring – assuming it’s connected to a standard 8-24VAC supply.

The alternative is that you either get a doorbell transformer installed or you can simply run the Ring off the battery and charge it every month or so when it runs out – it charges via microUSB.

To recharge the device you have to remove it from its base plate, which involves undoing two screws and sliding it off. It’s a bit of a faff, but once you’ve got the knack it’s a two-minute job. 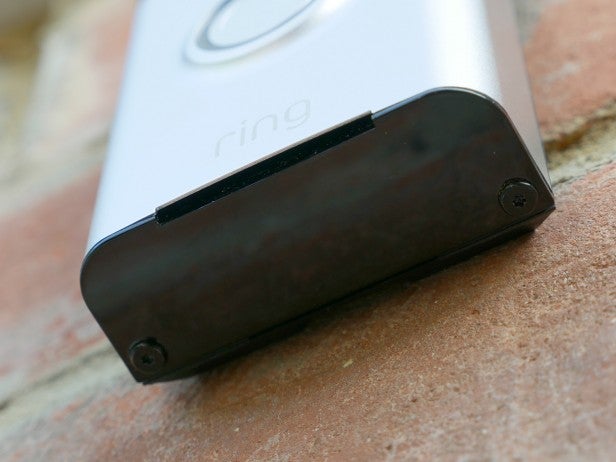 However, this is one of the early potential issues with this device, as it’s all too easy for someone to just steal your Ring, assuming they cover their face, of course. Not to mention that it’s easy-to-reach position means it’s simply that bit easier to break/steal than a conventional IP camera that would be mounted higher up on a wall. Also it was reported that it’s relatively easy for someone to hack into your Wi-Fi by stealing a Ring loaded with early firmware versions. However, the latest update apparently prevents this.

If your Ring is stolen the company will replace it free of charge if you submit a Police report.

Ring claims its doorbell is weathproof, with rain, snow, heat and sleat resilience, though the company doesn’t claim any specific IP rating. It clearly won’t survive a dunking but should resist most everyday weather.

The camera shoots at up to 720p at 15fps, which is a little low compared to some security cameras that can manage 1080p at 30fps, but is still sufficient for the up-close surveillance it’s meant for. The Ring Video Doorbell Pro offers 1080p recording. 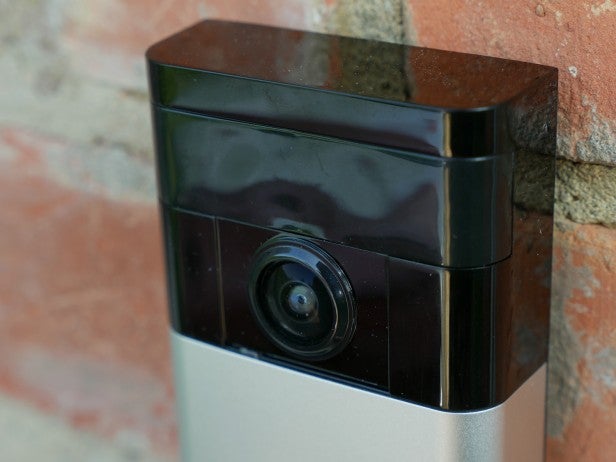 The lens is an ultra-wide angle type with a field of view of 180 degrees horizontal and 140 degrees vertical. It results in footage that has a round fish-eye effect, but that’s the price you pay for such a wide-angle shot.

Above the lens is an array of IR LEDs for night vision, while below is the only other external feature, which is the button itself.

Surrounding the button is a ring of blue light that flashes to indicate the Ring’s status while setting it up, charging it and when it’s pressed.

When you do press it, either the Ring itself will chime or your existing doorbell will. Alternatively you can buy a separate Chime accessory that plugs into any main socket in your home and connects to the Ring via Wi-Fi. With a Chime installed, that will ring instead of the Ring.

Slide the Ring off its mounting and you can access the Micro USB charging port and orange setup button.

Once you’ve downloaded the Ring app and set the Ring up via its built-in Wi-Fi signal, it’s a doddle to add it to your network and get set up. A quick sign-up to the Ring service with an email address and password and you can get right down to using it – there are very few extra steps before you’re up and running. 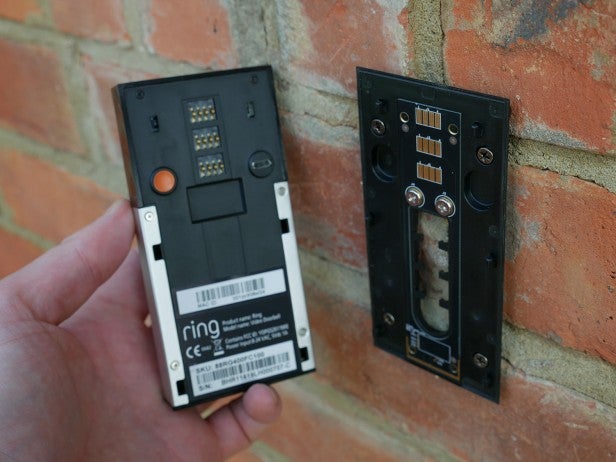 Ring Video Doorbell – Image Quality and Ease of Use

The Ring really is a doddle to use. The app is clear and simple, and it does a fine job of automating the whole process of adding devices to your network.

The app also links to the Ring’s cloud video recording service so you can play back clips captured via the motion detection or when the bell is rung.

Perhaps most crucially is that it provides notifications whenever the doorbell is pressed or, optionally, when motion is detected, and you can then talk back to the visitor if you so choose. This is possible no matter where you are in the world, assuming you have an internet connection. 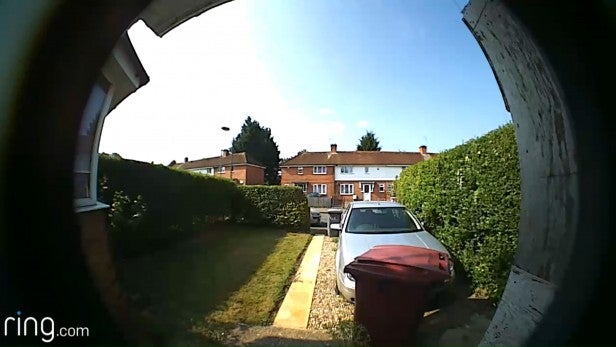 The footage it provides is plenty good enough for what’s required. The camera does a decent job of judging exposure, shows sufficient detail for close-up subjects and provides a wide field of view.

The motion detection also works well. You can set up a multi-zone system where the camera ignores certain parts of the image either completely or past a certain distance – so you can make it ignore traffic, for instance – but it seemed a bit hit-and-miss. I just ended up setting the system to record whenever anything happened. 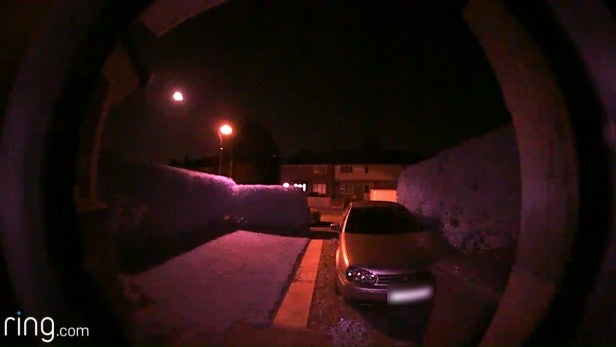 The Ring also has IR LEDs for night vision

This brings us to the big problem with the Ring: you only get one month of cloud video recording for free, and there’s no option to record to a local device such as a PC either, although you can trigger other IFTTT services. After that it’s £2.50 a month or £24.99 annually. Neither are particularly extortionate prices, but I’d have liked to have got at least six months for free before you have to start subscribing.

Alternatively, an option similar to Netgear’s Arlo system would be good. It has various paid-for tiers or you can opt for a free rolling one-week recording service – any footage older than a week is deleted. 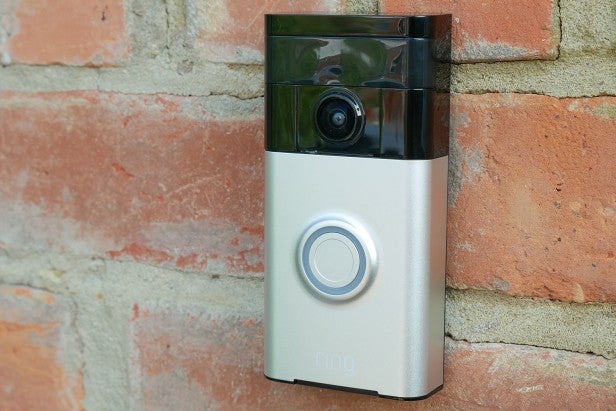 Should I buy the Ring Video Doorbell?

The Ring is a great one-stop solution to boosting your home’s security. It provides good motion-detecting video surveillance and lets you see who’s calling at the door. It also allows larger households to easily extend the range of the doorbell, making it very useful indeed.

Priced at £159, it’s pretty much on the money for a fully integrated solution with a dedicated app and cloud service too. You can get cheaper conventional IP cameras, but you’ll need separate software to get them working.

However, the ease with which you can steal the camera and the fact that you only get one month of free video recording means it comes up short of excellence.