Celebrities have become the lifeblood of our popular culture. Celebrity endorsement has been an important part of mainstream marketing for decades, but in the last few years celebrity names have flooded into the headphone market as if somewhere just out of view a giant dam has broken. First up was Snoop Dogg and his Skullcandy Skullcrushers in 2008, to be followed by Dr. Dre, Lady Gaga and even Justin Bieber, and their branded sets. AKG has opted for the altogether more refined Quincy Jones for its Q350 earphones, but will that refinement equate to a refined sound? 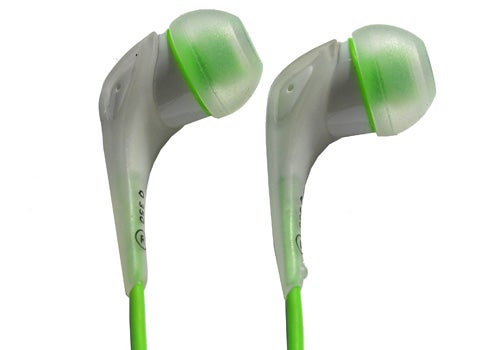 If it wants to evoke the musical genius of the great Quincy Jones in its earphones design, AKG has opted for a strange road in choosing lime green as one of the range’s key hallmarks. Alongside the Q350 are the full-size Q701 and on-ear Q460, and all are available daubed with bright lime green. Our test sample of these earphones mixes this green with white and translucent rubber, and the result will test the limits of some people’s tastes.

The slightly gaudy style of these headphones is matched with a fairly cheap-feeling build. Their mix of glossy-finish plastic and rubber works well functionally, increasing grip to make them easy to pull out of your ears, but it also leaves the Q350 feeling like a £20 set rather than one that sells for as much as £60.

The points at which earphone strength matters most, at the jack connection and where the cable meets the earbud, feel strong enough though. If the AKG Q350 have a build quality problem, it’s more one of perception than actuality – but it nevertheless eats away at the concept of value for money here. 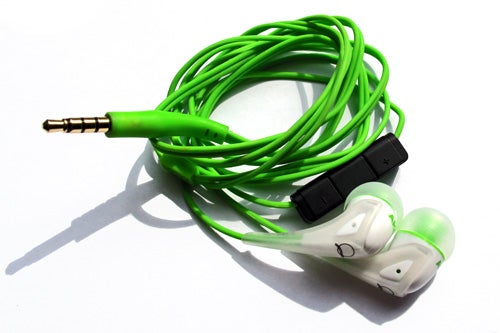 On each side of each earbud are two little outlet holes. As each of these lets some sound escape, the AKG Q350 are not as profoundly noise isolating as some other non-perforated pairs. This means that some noise will leak out to any passers-by on the bus, and that you won’t be entirely cocooned from the outside world either. The effect is nowhere near as bad as with a non-isolating pair of earbuds though, so they’ll still do the job for public transport – they only leak enough to annoy other passengers if you really dial up the volume. 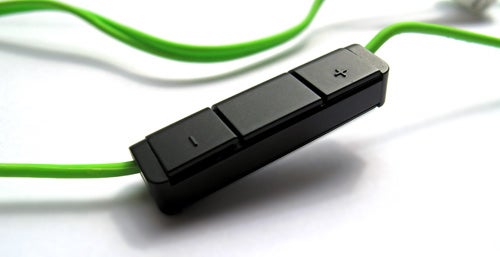 Hanging out along the cable just down from the right bud is the black remote control housing-come-handsfree kit. It’s comprised of three buttons that control music playback, alter volume and take calls.

Three sets of rubber tips are included too, in the standard small medium and large sizes. It’s not a generous selection, when some earphones include six or more pairs, but the soft silicone used is very easy on the ear. This, matched with the extremely lightweight plastic bodies, makes the AKG Q350 comfortable to wear – as long as you can find a decent fit with one of the three tip types.

But how do they sound? Worthy of the Quincy Jones name?

The AKG Q350 earphones use dynamic drivers, one in each bud responsible for the full spread of frequencies from the claimed 12 – 23,500 Hz range. They exhibit a sound typical of this type of driver – there’s plenty of bass on show.

Although a little overblown, the large low-end doesn’t leave these earphones sounding a muddy mess, as you’ll find with some other bass-heavy dynamic sets. However, strange things are going on up top here. The treble here is not natural, sounding oddly affected, as if it has been passed through some sort of bizarre boxy EQ preset. 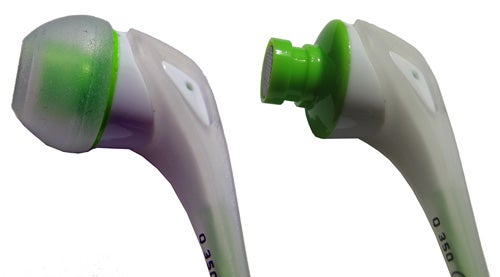 While the top 23.5kHz figure of this set’s frequency limit sounds impressive, don’t be fooled – you’ll get a much more accurate and insightful top end from the HiFiMAN RE0 or the Ultimate Ears 400vi.

The effect of this flawed treble is most noticeable upon first audition, and its effects diminish somewhat as your brain gets used to the coloured Q350 tone, but never leaves entirely. It leaves voices that rely on treble resolution for a decent representation, like Regina Spektor’s, sounding clipped and compromised.

It’s not all bad though. The exuberant bass and wide sound stage – presumably aided by the semi-open design afforded by those side ports on each earbud – make the AKG Q350 sound fun and bouncy once you’ve acclimatised to their quirks. At around £60, the AKG Q 350 are planted in territory where earphones start to sound seriously good. And to be honest, the AKG Q 350 don’t – not compared to some ‘phones available at a similar price. They manage to avoid the worst sonic sins of harsh sibilance and show-stopping bass bloat, but we find it hard to find a reason to recommend them over alternatives from Sennheiser, Ultimate Ears, et al. Unless you really love lime green.

The AKG Q 350 are fun earphones, with a big, bouncy bass and a surprisingly expansive sound, but are scuppered by an unnatural treble and a design that makes them feel cheaper than they are. They take some getting used to, and do provide some sonic satisfaction once you’ve gotten over this hump. Better earphones are out there at for the same money though.