The Ultimate Ears 400vi earphones take over from the SuperFi 4 buds as a middle point in UE’s IEM line-up. Can’t afford the Triple.fi 10s but want a high-end sound? These earphones could be just what you’re after. Retailing for around Â£75, the Ultimate Ears 400vi compete directly with Apple’s higher-end iPhone-ready earphones and Sennheiser’s CX880s – tough competition. 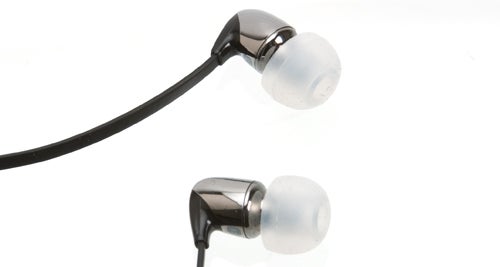 There’s currently only one finish available for these earphones, chrome with a black arm connecting the bud to the cable – its predecessor the Super.Fi 4 was similarly shiny, but this new model is sleeker, curvier and smaller. Ultimate Ears’s ‘phones have been described more often as odd-looking than gorgeous, thanks to pairs like the Super.Fi 5 Pro, and it’s good to see the audio-obsessed company give its earphones’ looks more thought.


The buds are shiny, but they’re not made of metal. The 400vi body is plastic, and seemingly made up of three main parts – there’s a seam just before the bud tapers into the speaker outlet, and naturally another to allow for the black cable connector. The construction isn’t as immaculate as the similar-looking UE 700s, but then these earphones are on sale for less than half the price.


Although less expensive-feeling to the touch, the tough plastic used instead of metal is a perfectly fine replacement – we have no qualms about the strength of the 400vi’s build. The construction helps to keep the weight down too – at 15g they’re light enough to sit in your ears for long periods without causing fatigue.

Ultimate Ears has re-thought its cable design with the 400vis, using a flat cable instead of the round one found in the Super.Fi 4s. It claims that this is intended to reduce the tendency to tangle that affects many earphones. Whether it’s down to this or the non-rubbery material used in the cable, we’re happy to report that the cable remains mostly tangle-free. It tends to lie a lot less straight than a round cable, but we’d much rather deal with kinks than tangles.


Five sizes of rubber tips are included, although there’s only one pair of each size so you’ll have to buy a new set to regain the perfect fit if you lose any. There’s also a single pair of comply foam tips, plus a plastic carry case that’s lined with purple rubber. 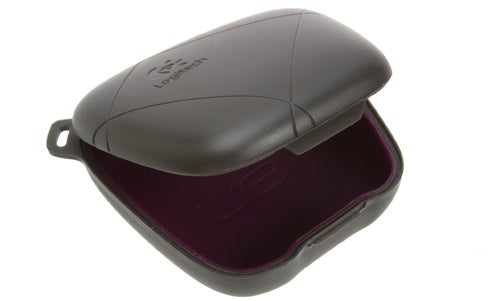 Thanks to the wide range of supplied tips, we found it very easy to get a good in-ear seal with the 400vis – and two different sizes performed perfectly well. Ultimate Ears’s rubber tips have an unusually soft finish too, which is easier on the ear canal than some rougher rubber tips.

The 400vis’ sound signature is typical of Ultimate Ears’s ‘phones – with a focus on the high and low extremes of the frequency spectrum. The high-end is very detailed and manages to largely avoid fatiguing sibilance unlike the 4s, but without the warmth of a prominent mid-range to back it up, there’s occasionally a hint of artificiality to the sound. Vocals can sound slightly thin compared to more capable, if more expensive, models.


Pumping-up bass levels to dazzle the ears is a common tactic of entry-level earphones, and while part of the 400vi’s bass is oversized, it’s not the low-end bloat we’re used to. There’s a bass swell, but its far down the register, giving bass guitars and kick drums an unusual level of prominence in the mix without dominating the whole sound. It doesn’t boom like a pair of DJ headphones might, but it isn’t perfectly proportioned with the rest of the sound. This effect was very noticeable straight out of the box, and lessened after 10 hours of listening or so, but never disappears completely. 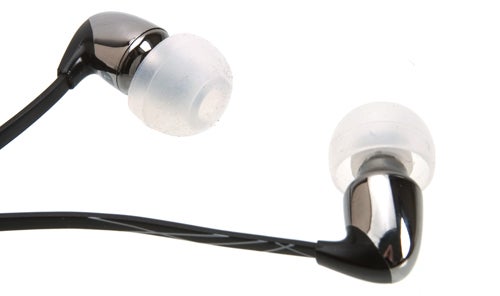 The effect of this bass emphasis varies depending on what’s being played. It can supply a rich tone to a lone acoustic guitar, add that satisfying subwoofer-style sub-bass to an electro track or let a kick drum and bass guitar steal the limelight from a female vocalist.


The sound is otherwise extremely detailed and restrained, with good separation and a wide stereo image. If this is a basshead’s earphone, it’s an unusually tasteful one. Spend more and you’ll get a slightly more natural sound, a warmer sound or some more detail, but you will usually have to spend significantly more to step up to that next level.


Sound isolation is above average with the right rubber tip in place but as with any IEM, there’s significant microphonic rumbling, usually caused by the cable knocking or rubbing against your clothing. This can be cut down by wearing the 400vis over your ears. Although they don’t appear to have been designed with over-the-ear use in mind, we found it perfectly comfortable. 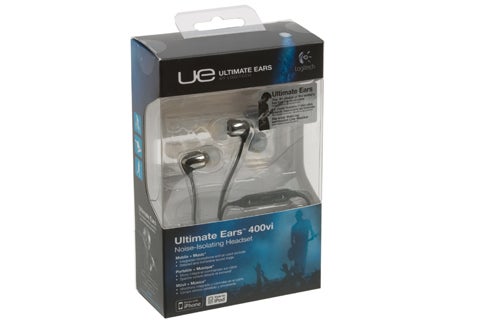 The “vi” of the Ultimate Ears 400vi’s name means this package has a built-in microphone, which is part of the on-the-cable controls, for use as a phone headset. We tried it out with a couple of smartphones and had no trouble, even with an Android phone not officially supported according to Ultimate Ears’s website. The call button worked perfectly and the audio was relayed through both earphones loud and clear.


We had less luck with the remote control functionality built into the cable. The mid-cable control housing has three buttons that are meant to act as play/pause, volume control and track change buttons with an iPod Classic, iPod Touch or iPhone. They worked just fine with our test iPod Touch and iPhone, but refused to work at all with a 160GB Classic model.

The Ultimate Ears 400vi earphones are an improvement on their predecessors, the Super.Fi 4s, with a sleeker design and less artificial sound. They provide plenty of very low-end bass and oodles of detail to match, but thanks to a slight over-emphasis of this low end, the otherwise accurate sound is thrown slightly off-balance.