Media players are evolving to offer ever more functionality, nicer interfaces and extra features, while supporting every video, audio and picture format under the sun. D-Link’s Boxee Box is the most recent example, offering a remote which doubles as a full Qwerty keyboard. Other interesting candidates include the Asus O!Play HD2, which offers USB 3.0, and the Seagate FreeAgent GoFlex, which takes plug-in 2.5in drives. However, for all these talents, there haven’t been any recent candidates that offered TV tuners. Enter A.C.Ryan’s Playon!DVR HD.

In fact, the last media player we looked at to feature a tuner was also an A.C.Ryan unit: the Playon! DVR TV back in 2009. It was a versatile box for its time, but without support for some of the more popular video containers such as MKV or MOV it failed to truly impress. Now the Dutch company is looking to rectify this with its new Playon!DVR HD, which features dual digital (DVB-T) tuners, network connectivity and NAS functionality, internal storage with recording and time-shift, and should play back any media you’d care to throw at it, including RMVB, FLV and of course MKV. Is it enough to stay ahead of the competition?

The Playon!DVR HD arrives with a generous accessories bundle. You get a reasonably comprehensive manual, two composite cables, a component cable, a USB cable (for hooking the unit up to a computer) and a high-quality, braided HDMI 1.3 cable with gold-plated connectors. There’s a small TV antenna (of limited use for most), the power cable and brick, and of course a remote control. A Wi-Fi N dongle also came with our review unit but this is an optional, £20 extra.

Getting to the player itself, unfortunately A.C.Ryan has used the same rather sizeable chassis it employed for the original Playon!HD. We weren’t expecting something as small as the Playon!HD Mini, but with dimensions of 230 x 165 x 60mm and weighing in at no less than 1.8kg, it’s the heaviest media player around, even if the Boxee has a more awkward shape. But at least this is excusable considering the Playon!DVR offers more hardware features than any other non-PC-based media player we’ve yet looked at.

It’s also a very well-built and quite stylish unit. Its chassis, back and base are made from metal, while the upper shell is constructed from three pieces of very solid matte black plastic fitted smoothly together. Only the clear black front section is scratch and fingerprint-prone, though it does look great if kept in good condition.

We’re glad that A.C.Ryan has brought back physical controls on the unit, as the Playon!HD lacked these. This means you can still control most of the Playon!DVR HD’s functions if you should happen to not have the remote to hand, and the discrete buttons offer great, positive feedback. A completely new feature is a blue-LED text readout, which is easy to read and gives you frequently-useful information. 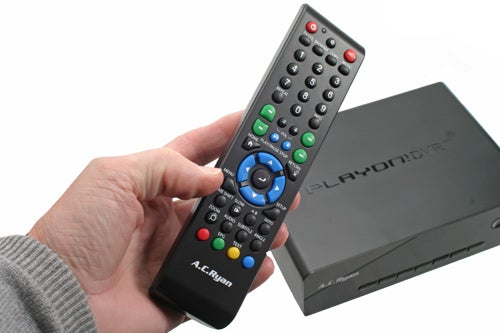 Unfortunately, the remote is identical to that found with the Playon!HD, meaning that while it’s solid and lies nicely in the hand, its buttons aren’t exactly well-spaced and their layout isn’t completely intuitive. Still, overall it’s usable.

As ever with A.C.Ryan, connectivity of the Playon!DVR HD is impressive. Along the right you’ll find an SD/HC card reader, twin USB 2.0 A sockets and one USB 2.0 B for hooking the unit up to a computer. At the unit’s rear, we have a 10/100 Ethernet port for networking (a Wi-Fi N dongle is an optional, £20 extra), an eSATA port (giving great transfer speeds, roughly equivalent to USB 3.0) for external storage and the TV tuner’s aerial in and outputs. For AV connectivity we have optical and co-axial digital audio outputs, with HDMI 1.3, component and composite taking care of video. There’s also a composite input so that you can record from standard-definition devices like a VHS player. Basically there’s not much missing here.

At the base of the player, a panel that requires the removal of two screws grants access to the hard drive. You can buy the Playon!DVR HD as a bare unit, though keep in mind a local drive is required for its time shift and recording functions, as well as some online services such as BitTorrent. Installing a drive yourself is an incredibly easy process, but if you’d prefer the DVR HD is also sold with ‘eco’ drives pre-installed, in capacities ranging from 500GB to 2TB. Our review unit contained a 1TB Samsung EcoGreen drive.

Where the OSD is concerned, A.C.Ryan has given its Playon!DVR HD a bit of a visual update, but it still pales compared to the latest media players like Western Digital’s WDTV Live or D-Link’s Boxee Box. It’s also still the same somewhat clunky interface underneath. However, the Dutch company is aware of this and is bringing out a completely overhauled graphical user interface (GUI) for its entire HD range, which should be available ‘soon’ for the DVR. 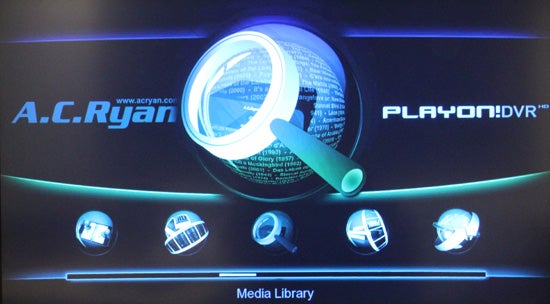 Still, at least it all works, and transitions are reasonably smooth most of the time. From the main menu, you’ll be able to access Digital TV, which gives a pretty good picture from the DVB-T tuner; AV-In for devices hooked up to the composite inputs; Schedule Recording, which can also be set up through the EPG or remotely if the device is connected to the internet; Browser, providing straightforward access to your media; and Media Library, giving access to a specific file type (Music, Photos or Movies) and indexed access to files on the internal hard drive only. 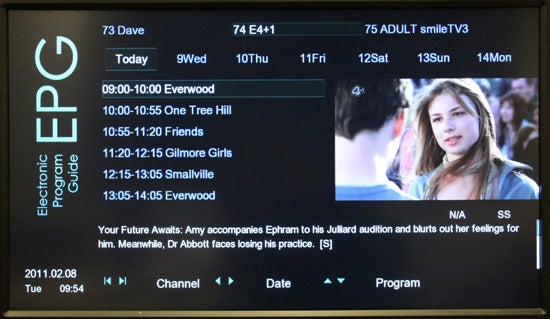 Then there’s Yet Another Movie Jukebox, which can also be found on the latest Popcorn Hour. It gives you a slick thumbnail-driven interface with extensive film information (year, language, director, rating etc.), similar to XMBC. Unfortunately, it’s a somewhat complex process to setup, involving installing an application on your PC, but for tech-savvy users it will certainly be worthwhile. 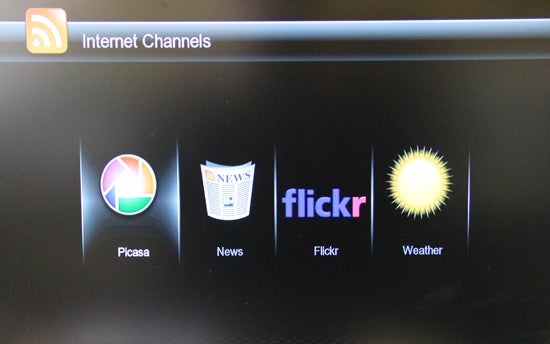 Torrents require you to activate the BitTorrent and SAMBA options in the Setup menu, and of course for a local hard drive to be present. These are also remotely controllable through the web. Internet Feeds remains unchanged from previous Playon! HD models, offering Picasa, News, Flickr and Weather. Our only complaints with these are that the weather app didn’t allow us to enter a default location, and that YouTube is a feature offered by many rival media players which is still absent here. SHOUTcast Internet Radio is also available while a password-protected File Copy menu and Setup menu, which covers everything from channel settings and recording location/quality to output resolution, round out the options on offer.

Unsurprisingly, media playback for the Playon!DVR HD is completely identical to that of the Playon!HD and Playon!HD Mini. And that’s a good thing, as it will handle pretty much anything you’d care to throw at it. The full list can be seen below and we put most of them to the test, confirming that they played back with no issues whatsoever. 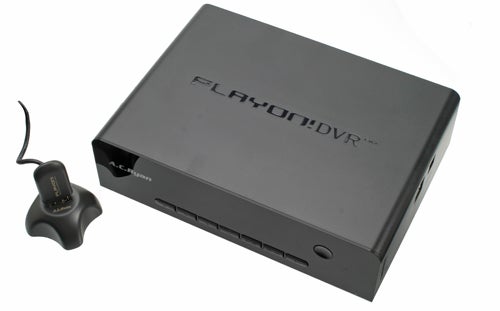 The Playon!DVR HD never gets more than warm to the touch, but does occasionally get a tad noisy. While any player housing a moving-parts desktop drive is going to produce some noise, the tiny fan at the unit’s back also contributes. Still, at the average distance one usually sits from a television, it’s virtually inaudible.

While we’re being picky, it would have been nice to have a Freeview HD tuner rather than the standard definition one found in the DVR HD, but as the tuner is a removable module it’s not inconceivable that an upgrade might be available in the future.

Until its somewhat dull and awkward (if perfectly usable) interface gets updated, the Playon!DVR HD’s main stumbling block is its price, which starts at around £170 for the bare-bones model. This puts it into the same playing field as the WD Live Hub and D-Link Boxee Box, the former of which includes a 1TB HDD and HDMI 1.4 for less, while the latter matches it on format support and outstrips it with online features, in addition to offering an awesome QWERTY remote. However, neither one gives you dual digital tuners so it’s really a case of what you prioritise – a truly all in one solution or a more focussed and better executed product. If the former takes your fancy then the DVR HD will more than get the job done.

It might not be the slickest or quietest media streamer around, and (until the next update comes along) its interface is a tad clunky and unattractive. But with unparalleled format support and a boatload of features backing up dual digital tuners, A.C.Ryan’s Playon!DVR HD is one of the few options on the market that really does it all.