As the name betrays, Seagate’s FreeAgent GoFlex Home isn’t aimed at business types after the latest and greatest in NAS technology, eschewing as it does multi-disk RAID arrays, hot-swappable drive bays or any other such fanciness. Instead, the GoFlex Home purports to offer a reasonably priced, user-friendly single drive solution to those wanting network-attached storage for backing up and sharing files.


Slightly strangely the GoFlex Home comes in two parts, a dock and a removable section housing the device’s storage. It sounds slightly strange, but it’s actually quite a clever idea. If you’re the paranoid (or just conscientious) type that feels like locking your backed-up data in a fire safe every evening, not having to unplug cables to do so with the GoFlex Home might just be enough of a consideration to win its favour over an alternative device. It also allows you to easily grab your drive and take it with you, rather than having to copy files back and forth to memory sticks. 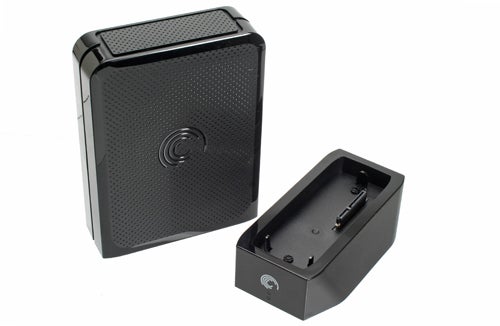 The removable part of the GoFlex Home is, unsurprisingly, little more than a plastic casing around a standard 3.5in hard drive, to the extent that the connection to the dock is simply a gap in the casing, exposing the SATA port of the hard drive within. A few retention clips ensure that it’s not just the SATA connection holding the drive in place, with a little help from the drive’s mass, and gravity.


The dock is also a simple affair, with the aforementioned SATA port up top, two status LEDs at the front (power and activity), and a power switch, power input, Gigabit Ethernet port and a USB port. The latter means you can hook up an external hard drive in order either to augment the GoFlex Home’s own, or for backing up your important data. 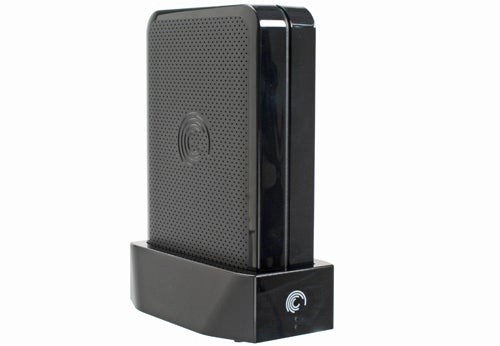 For most users, we think the £87, 1TB GoFlex Home should offer sufficient storage. A 2TB unit will cost you just under £125, which is a significant increase; even if it isn’t too much out of line with the difference between a 1TB and 2TB drive purchased separately. We think that anyone needing more storage than that should be looking at a full-fledged, RAID-supporting NAS system.


One annoyance of the GoFlex Home is that on a Mac you’ll also need to run a separate utility to configure the drive for Time Machine though the benefits of doing so are of course well worth the effort. On Windows you’ve the option to use that OS’ own built-in backup suite (which is far less slick than Time Machine), or you can install Memeo Instant Backup, which is installed along with the GoFlex Home’s management software, or found separately on-disk.

Setting up the GoFlex Home is a simple affair, requiring only that you supply a name for the device itself, as well as a username and password for accessing it. The device name should be made something memorable, as you need this to connect to the NAS remotely via the Seagate Share website. Once the GoFlex Home is set-up you can remove the Seagate Share application and simply manage the NAS through the web interface, which is simple, but intuitively laid out and offers all the functionality you’ll need.

A seemingly arbitrary limitation of the GoFlex Home is that Seagate limits the device to only three users, unless you purchase a subscription to its Seagate Share Pro service. However, although some will take umbrage with this limitation we doubt any GoFlex Home buyer is likely to need to use it with more than three people – bearing in mind multiple computers can connect using the same user name, albeit without password-protect separate storage areas.


Included in Seagate Share Pro are remote FTP access to your GoFlex Home, remote access to your device from smartphone (from Blackberry handsets to the iPhone), and a few photo-based features. These comprise an RSS feed-builder that will update as new photos are added to your device, a photo gallery powered by Cooliris, and integration with Facebook and Flickr such that images put on your GoFlex Home will be pushed to those services. All nice-to-haves but whether they’re worth the $19.99 Seagate asks for them only you can decide. 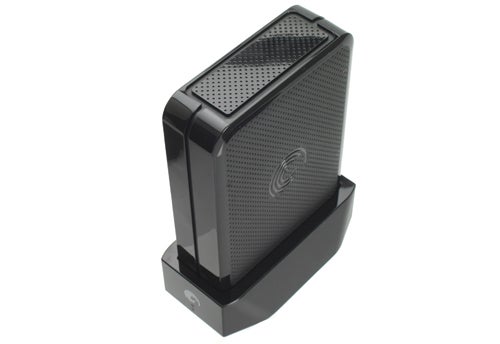 Letting the GoFlex Home down slightly were transfer speeds of 10.2MB/s when performing an 8.6GB Time Machine backup. This isn’t amazingly impressive, but is as good as a number of more expensive alternatives. Throw in the extra functionality offered by the GoFlex Home and the GoFlex Home makes an attractive option.


An interesting, if not necessarily useful design, acceptable performance, and user-friendly interface coupled with competitive pricing make this a good choice for those not after a more fully fledged NAS option.