With tiny, passively-cooled Atom-based nettops like the Acer Aspire Revo offering ever more features at ever lower price points, HD Media players are under increasing pressure to add features and services. However, considering Asus’ previous effort, the Asus O!Play Air HDP-R3, was already stuffed to the brim with bells and whistles, what can its successor offer over and above the older model? USB 3.0, internal storage, analogue HD over component and a completely revamped interface are just some of the goodies, so let’s check it out.

As soon as you take it out of the box it’s clear we’re dealing with a completely altered beast. The main difference is in size, as rather than requiring external storage, the O!Play HD2 now has room for an internal 3.5in hard drive. Unfortunately, Asus has failed to trim the fat, and at 230 x 178 x 60.5mm, its latest device is the giganotosaurus of media players, even when compared to the A.C.Ryan Playon!HD‘s T-Rex. Despite this, it still uses an external power supply, though this is relatively small.


Its bulk doesn’t help its looks, which – as we mentioned in our preview of the device – aren’t exactly attractive to begin with. The O!Play Air was at worst unobtrusive, but only its designer could love the odd angles and cheap glossy finish of this new player. Asus has added a few distinct visual details though, and while the tadpole-like pattern on the top isn’t particularly pleasing, a luminescent blue LED strip at the front does lend it a Tron-esque appeal and makes for a nice – if somewhat distracting – display in the dark. 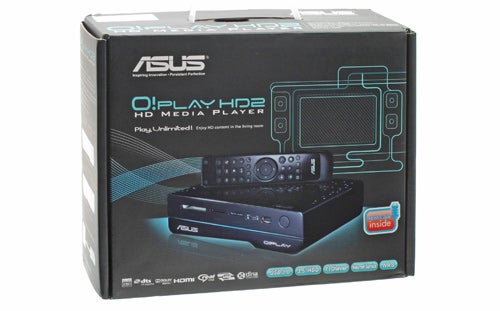 Connectivity has undergone a more welcome transformation. At the O!Play HD2’s front we have three separate card readers for CF, SD/MMC and MS/Pro Duo memory cards. There are also two USB 2.0 ports, one of which doubles as an eSATA connector.


Around the back, there’s a third USB 2.0 port, and the headline-grabbing USB3.0 port the HD2 uses to connect its internal drive to a computer. As long as your PC supports the new standard, this should make transferring your multimedia collection between it and the player very quick indeed.

Audio is competently catered for with stereo phono and both optical and co-axial digital outputs, and of course is also carried through the HDMI 1.3 connector, which joins analogue component and composite in providing for video. The only absentee which we might have liked to see is a 3.5mm jack for connecting headphones or PC speakers without resorting to an adapter, but that’s a rarity on media players.


Though a 100Mb Ethernet port supports networking and provides access to web-based services, the one casualty here compared to Asus’ older O!Play Air is inbuilt Wi-Fi – though with USB ports to spare, using a wireless dongle is a more viable option than on many less well-endowed media players.

You’ll find all the necessary bits included in the O!Play HD2’s box, including composite and HDMI cables, a metal 3.5in HDD cage (no 2.5in adapter for SSDs or laptop drives though) and an eSATA power and data adapter to hook it up with. There’s also a multilingual quick start guide and a remote supplied with two AAA batteries.


Like the player it goes with, the remote is a markedly different and far larger device than that found accompanying Asus’ previous O!Plays. However, it’s not only very usable, but the extra space is genuinely needed for the extra features this remote provides, such as volume controls. 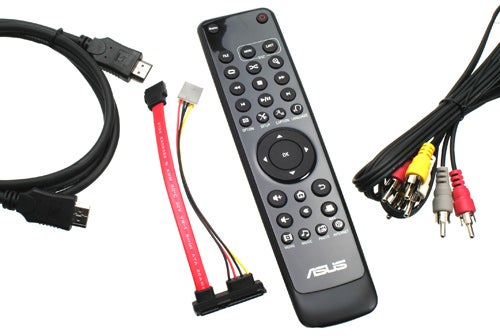 Though the top section of the remote is mostly glossy, its base is matt, which combines with an ergonomic shape to make for a comfortable experience. Nor do the large, soft-touch buttons detract from this: they’re logically laid out, large and well-spaced, and they offer decent feedback (the central D-pad surrounding a huge thumb button is especially nice to use).


Installing a hard drive in the O!Play HD2 is straightforward, if nowhere near as simple as it could be. First you need to secure a 3.5in HDD (or 2.5in drive with adapter) into the metal drive cage using four of the eight screws provided. Then you need to remove another screw to open the media player, attach the supplied SATA power and date cable, and attach the drive cage using another four screws. Why Asus and other manufacturers can’t just implement an easy tool-less clip-in system as found on the likes of the Coolermaster XCraft 360 Hard Drive Enclosure is beyond us. 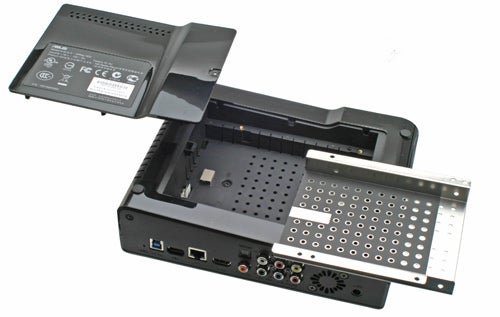 There is some padding to prevent vibrational noise being transferred through the hard drive. Seeing a tiny fan at the back of this Asus media player, we were afraid it wouldn’t matter much either way, expecting it to be rather noisy like with the A.C.Ryan Playon!HD. However, thankfully this was not the case. In fact, without a moving-parts drive installed, the O!Play HD2 runs so quietly that you have to get really close before you can even tell it’s on. We would definitely recommend installing some form of internal storage, though, as without it the player’s NAS functionality (which we’ll cover later) simply won’t work.


Setting the O!Play HD2 up is easy as pie. Just enter the time and date, video output (anything from standard definition PAL or NTSC to 1080p) and network settings where required, and you’re good to go. 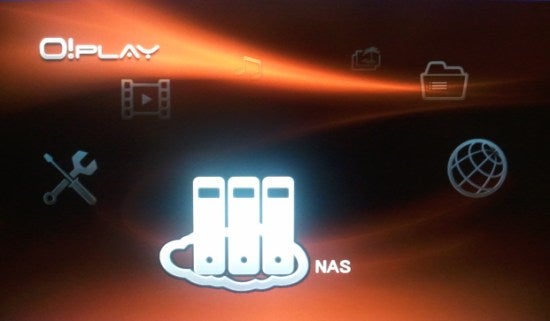 The interface has received a makeover that utilises shades of brown rather than its predecessor’s blue, but visually the new interface is not much of an improvement. If anything, it’s even more simplistic, though it must be said that the new monochrome icons are very clear and are more in keeping with the interface’s streamlined look.


Aesthetically it’s still not the prettiest around then, but functionally there’s quite an improvement. Menus are slightly quicker to respond, layout has been tweaked to be even more straightforward, and indexing is now far more comprehensive. Where before the Asus O!Play Air HDP-R3 only indexed music, it now indexes photos and movies too from any storage you attach, matching the best of its rivals such as the WDTV Live HD. Files can still be viewed by folder, but you can also choose to view all files of that type, search for files by name and sort them alphabetically or by date (newest to oldest and vice versa).

The O!Play HD2’s functionality is divided into File Manager, Movies, Photos, Music, NAS and Online Media. The first four allow you to browse files stored locally or on networked devices. NAS functionality includes SAMBA Server, allowing you to create Windows accessible file shared folders, FTP Server functionality so you can copy files to and from the device over a network, an iTunes server for remote access to your music collection, and BitTorrent for file sharing. 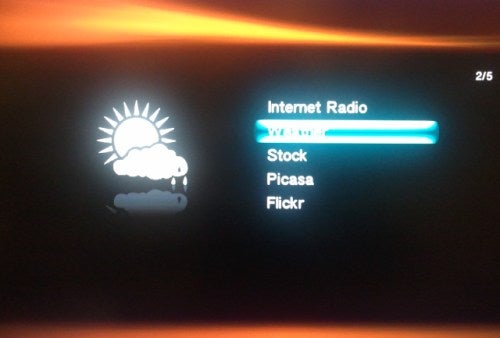 Online Media, meanwhile, provides access to Internet Radio, Weather (localised by city), Stocks, Flickr and Picasa, which all worked smoothly, though we missed YouTube and iPlayer functionality. Despite both the player’s preview and manual mentioning Opera browser support (combined with the ability to hook up a mouse for effortless browsing), this has not been implemented yet on Asus’ latest media box, but is promised for a firmware update within the next few weeks. For now, the ViewSonic VMP74 remains your best bet for browsing the net on a device of this type.


Format support remains largely unchanged from previous Asus models, but that’s no bad thing as the company’s O!Play range has supported practically every format you could want since day one. Video formats include MPEG1/2/4, H264, VC-1 and RMVB, with all the popular extensions such as AVI, ASF, DAT, FLV, MKV, M2TS, MP4, MOV, M4V, RM, TS, TP, TRP, VOB/ISO/IFO, WMV, and xVid/DivX, with SRT, SUB, SMI, SSA or TXT subs. The player will play these back in up to 1080p 60Hz or 24. It also plays unprotected DVDs from an external optical drive, and though this does mean you can’t play store-bought films, backups will work just fine. 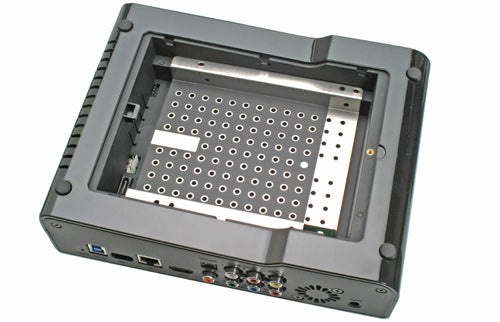 Audio support is likewise extensive: there’s MP3, OGG, WMA, WAV, AAC, AIFF, COOK and FLAC, Dolby Digital or DTS passthrough, and even Dolby True HD, the same surround sound format used by Blu-rays and one many rival players don’t support. Finally for pictures you can view JPEG, BMP, PNG, GIFF and TIFF, and the O!Play HD2 can read all these file types from storage formatted in FAT16/32, NTFS, HFS+ and EXT3.


All the files we threw at the device played back smoothly, and material was scaled to 1080p with a little more finesse than we were expecting. Asus’ video noise reduction also worked well for a relatively low-end device like this, with a low-quality RMVB file looking cleaner and sharper than we’ve seen it on most other media players. 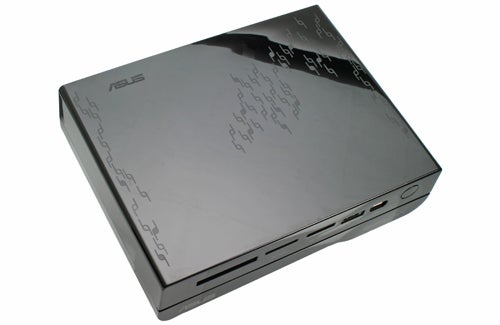 Finally we get to value, and thankfully Asus hasn’t hitched up the price on its O!Play HD2 compared to previous models, as it should be available from next week at Scan for a very reasonable £110. This makes it a bit of a bargain considering its range of connectivity, format support and extras, with the promised Opera browser a unique highlight. However, for those on a tighter budget or who’re just after a smaller, more elegant player, the £85 A.C. Ryan Playon!HD Mini offers many of the same features.


If you can live with its bulk, less than stellar looks and rather plain menus, Asus’ latest O!Play HD2 media player is one of the most versatile around, stuffed with connectivity and features. It performs well, plays everything without a glitch and – depending on the drive you put inside it – does so virtually silently, while remaining very affordable.