If Apple TV is beautiful but shallow, and Western Digital’s WD TV Live Hub comprehensive but complex, can D-Link’s long awaited Boxee Box strike a perfect balance of the two? Pretty much…

First previewed way back in December 2009, this is one media player which has been an incredibly long time in the making. This is somewhat baffling considering the Boxee Box is essentially just a housing (an admittedly radical and stylish housing) for Boxee, a freely downloadable multimedia programme which first hit the public in June 2008.


That aside, what D-Link has done with the Boxee Box is impressive. It has built what looks like a cube with a corner sliced off and inside stuffed a whisper quiet Intel Atom based CE4100 chipset with enough horsepower to potentially do away with a dedicated media PC. It is flexible with Ethernet, WiFi, HDMI, SPDIF and RCA Audio inputs and can accept media either over a network (a boon for NAS owners), via two USB ports on the back or a SD card slot on the top. By contrast Apple TV lacks the USB/SD card functionality and is locked to iTunes-only content while the WD TV Live Hub baffled us all by not integrating WiFi. 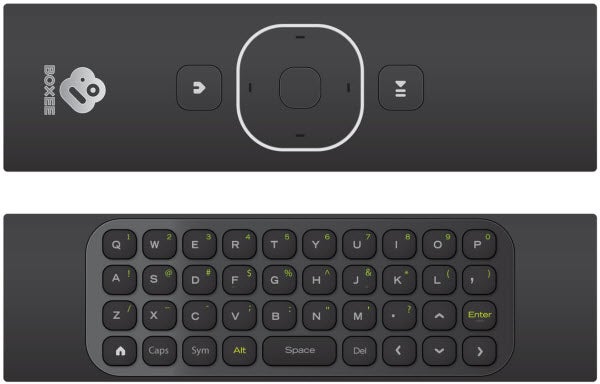 Another nice touch is the controller which on one side is a simple D-Pad with play/pause and back buttons and on the other features a full Qwerty keyboard. In use keys are a little spongy, but it remains heaven sent for typing in WiFi passwords, web addresses and searching using the integrated apps such as BBC iPlayer, YouTube and so forth, but more of those later.


First up is the UI and this is a hugely controversial area. Switch on the Boxee Box (a slightly overblown experience lasting about 30 seconds and full of needless animations) and after a somewhat retro screen alignment wizard (used just the once) you’ll be presented with the home screen. This couldn’t be simpler with links to your different types of media and direct access to network files. The problem is it is too simple, icons are huge and it doesn’t make good use of the space (see below). 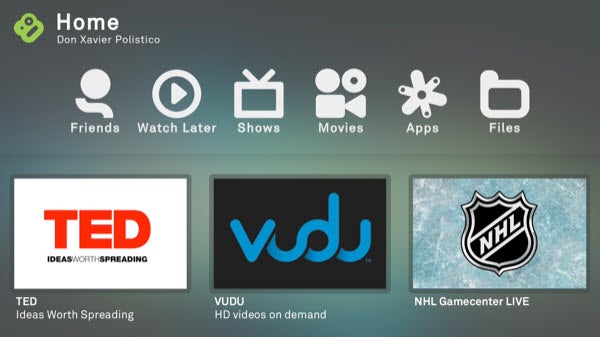 Consequently you’ll find yourself needing to navigate between multiple screens because functionality that really should all be on one screen has had to be spread out. Most frustrating is this experience is greatly dumbed down from the swanky UI originally previewed in Boxee Box betas and there is already a 15 page petition on the company’s forums to change it back (more comparisons between the two can be seen here. The new UI isn’t bad per say – it is easier to use than the Live Hub and you’ll never get lost – but it does feel like Boxee scaled down its ambitions at the last minute.


On the plus side Boxee has confirmed firmware updates will bring back elements of the old UI over time. 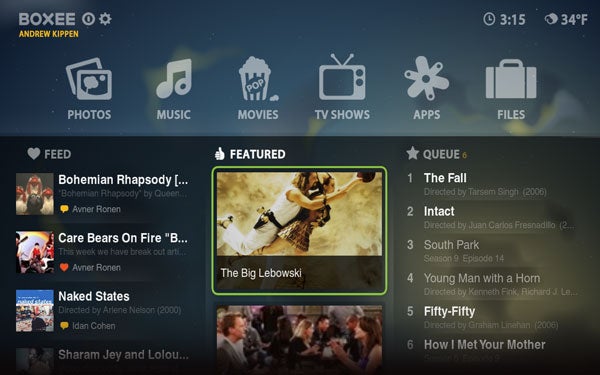 So as a user experience the Boxee Box fits squarely between the Apple TV and WD TV Live Hub: not quite as slick as the former, more intuitive than the latter. The good news is from this point onwards it starts to excel.


Western Digital’s WD TV range used to be the king of codec support, but the Boxee Box raises this to a whole new level (full spec list on page 3). Quite simply we couldn’t find a single file type to make it stumble and it handles 1080p content without batting an eyelid. Where possible Boxee will also automatically tag multimedia content (attained legally or otherwise) giving movie descriptions and TV episode summaries. Combine this with the extensive network support (compatible protocols include IPV4, ARP, TCP, UDP, ICMP, DHCP, DNS, DDNS and Samba clients, HTTP server, RTP/RTMP, VPN: PPTP and DLNA 1.5) and it is the best media streamer to date. Even better is this is only one element of the Boxee Box’s abilities. 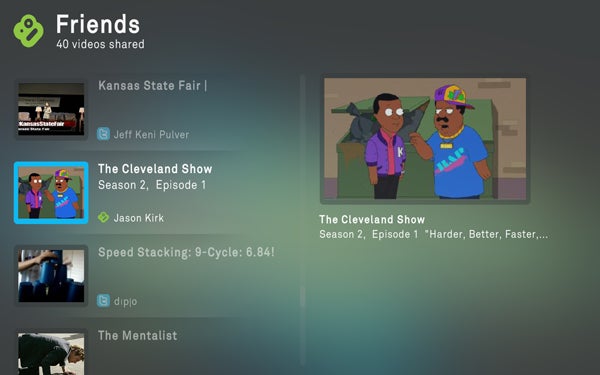 The other is its extensive online functionality. This has drawn contrasting opinions in the US and the UK, as the US service lacks big hitters like Hulu, Fancast, Amazon and more, but in the UK we are well served with a multitude of apps including: BBC iPlayer, Last.fm, Comedy Central, College Humor, The Onion, Fail Blog, Boing Boing, Wired, YouTube and Flickr. Interestingly since Boxee is an open platform so any third party can develop apps meaning you’ll also find (locked by default) adult content.


Apple’s strictly controlled app store, this most definitely isn’t. Of course the irony is Apple prides itself on the extensive app support for iOS yet it has so far blocked app development for Apple TV. Meanwhile the Boxee Box is overflowing with them and numbers (currently over 130 in the UK) are growing all the time. A further nice touch is a ‘Friends’ feed which groups all multimedia content shared by your friends via Facebook, Twitter and Google Buzz into a single stream. This makes for pleasant browsing at the end of a busy day.


We are also impressed by the way Boxee is continually upgrading its platform. We upgraded to the latest firmware (Build 1.0.1.16319) – something which happens automatically or can be triggered manually via Settings>System>Update and ‘Check for New Version of Boxee’ – and the improvements are extensive. If Boxee can keep this up it really does have the potential to leave its competition eating dust.


So if you’re in the market for a media streamer you should rush out and buy the Boxee Box? Yes, but there are a couple of caveats. Firstly it is overpriced. A $199 RRP (£127) has been directly converted to £199 in the UK. This is crazy for a machine with no internal storage and compares badly with the WD TV Live Hub which integrates a whopping 1TB HDD yet costs just £159. Apple TV is also only £99 (and $99 in the US) though is obviously more limited in just about every way. 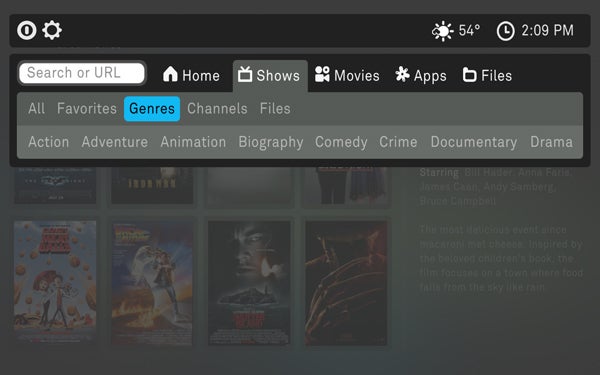 In addition Boxee has integrated a web browser which is both slow and buggy and the mouse pointer has to be controlled by the remote D-pad, a disappointment given the Qwerty equipped remote makes browsing a potentially attractive opinion. Let’s hope more firmware fixes are on the way.


Despite this, if you can stomach the asking price, the Boxee Box sets a new standard for media players – and just in time for Christmas…

It may be overpriced, but the Boxee Box has unparalleled codec support, a slick UI and looks fantastic sitting under your TV. The fact Boxee has committed to regular firmware updates also means it should keep improving while third party app support is second to none. iTunes fans may prefer the Apple TV and those on a budget may be better off with the WD TV Live Hub, but we’d find the extra cash and spend it on the Boxee Box. 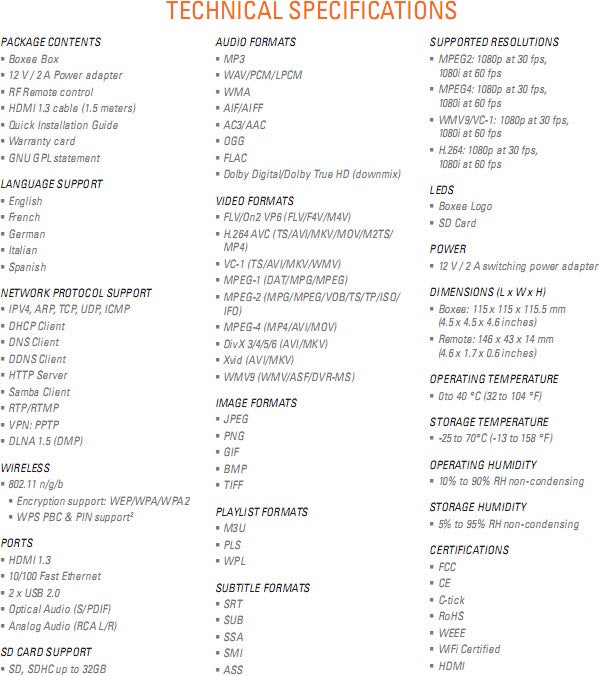