What is Intel Haswell? 5 reasons why you should care

The ‘Intel Inside’ moniker may be known around the world, but in recent years it has been superficial rather than internal advances that have caught the eye. This is about to change. Slapped in front of every major laptop launch at Computex this week has been the codename ‘Haswell’ and with it comes some quite incredible claims. It could also be the key to making Windows 8 a success…

So what is Intel Haswell and why should you care?

Haswell is the codename for what Intel formally refers to as its fourth generation Core architecture. In short: new processors, and they will carry the same ‘i3’, ‘i5’ and ‘i7’ branding and use the same 22nm manufacturing processor as their predecessor ‘Ivy Bridge’. Despite this Intel executives claim Haswell will bring the largest single generational gain in power efficiency in the history of its x86 processors. 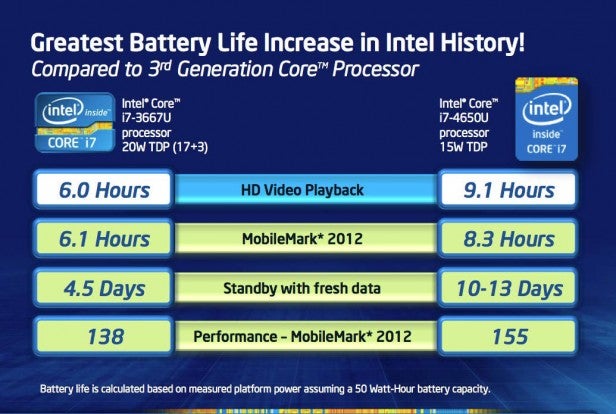 The result is Haswell-based Ultrabooks must deliver a minimum of nine hours battery life in Windows 8 when idle, at least six hours when playing HD video and last for up to seven days in standby. Fail this and manufacturers can’t call their device an Ultrabook, and won’t benefit from Intel’s support and subsidies.

By contrast, Ivy Bridge Ultrabooks had to last over five hours in normal usage. This is a huge difference and could finally signal the arrival of thin and light laptops that truly last all day on a single charge.

How has Intel achieved such gains? The primary reason is Haswell’s more responsive power management, which can react within nanoseconds to what the user needs. As such chips don’t just power down based on whether you are gaming or writing email, they react instantly – even between keystrokes. “[It is] the kind of granular power management at the chip level that we’ve never had before,” says Intel Architecture Group vice president Navin Shenoy.

Despite its headline grabbing battery life Haswell isn’t only about stamina, it brings significantly greater graphical prowess as well.

Following the HD 4000 range of integrated GPUs used with Ivy Bridge, Haswell will see the launch of the HD 5000 range that offers up to twice the performance of its processor. Intel claims this is enough to make graphically intensive games like Skyrim and Bioshock Infinite playable. While it may not sway hardcore gamers from dedicated solutions, it opens up gaming to a more casual audience. 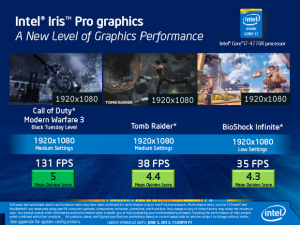 It isn’t only gamers who should celebrate, though, as Haswell has a big carrot for home cinema fans too. Haswell natively supports 4K video playback, so should you wish to output downloaded content to a shiny new 4K television at some point in the next few years Haswell has you covered.

Interestingly, given these benefits, Intel is no longer being coy about its integrated graphics. The HD 5000 range will be the first to get a marketing friendly name with lower end GPUs called ‘Iris’ and higher end models named ‘Iris Pro’.

But Haswell won’t purely benefit Ultrabooks. Intel has confirmed it will launch 19 Haswell-based mainstream mobile processors in the remainder of 2013 alone, and they will bring savings not only to larger laptops, but also be potential game changers in bringing 8-10 hour iPad-comparable battery life to Windows 8-based tablets and hybrids.

This is potentially huge for both Microsoft and its struggling third party manufacturers. In choosing to root its tablets and hybrids in a PC platform as opposed to Apple’s strategy of launching tablets from a nimble phone OS, their theoretically greater functionality has so far been hamstrung by poor battery life. In fact this was our biggest (though not only) problem with the Microsoft Surface Pro. 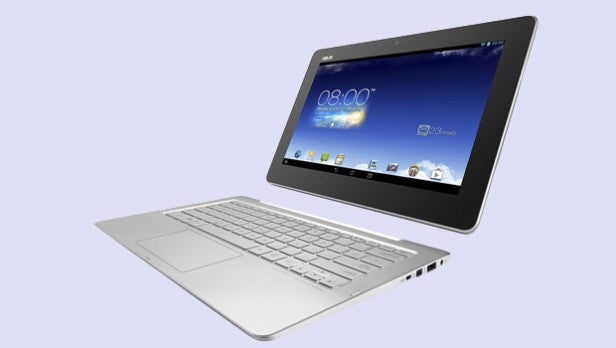 Exciting results can already be seen. Computex 2013 has been filled with such devices, making the first 8-inch Windows tablet viable and even inspiring wild creations such as the Windows 8/Android merging Asus Transformer Book Trio (above).

Intel claims over 50 ‘2 in 1’ Haswell powered devices will hit the market over the next few months. With the traditional tablet sector dominated by Samsung and Apple, this could inspire some much needed competition.

Not only does Haswell outlast and outperform Ivy Bridge chips, it will also run at lower temperatures. This means smaller fans that enable even thinner designs and, crucially, a lot less noise. In fact, Intel even took to the stage at Computex this week to tease a completely fanless version of Haswell for tablets and hybrids. 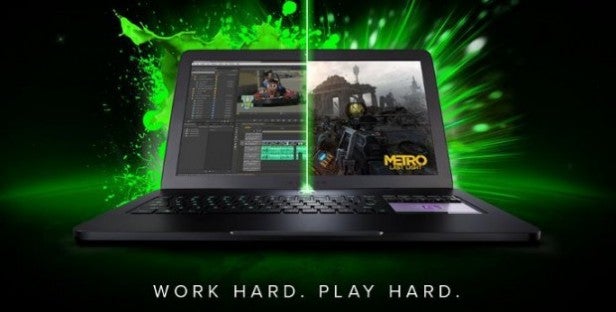 Yes, there have been fanless Intel processors in the past, but none that deliver it with the performance of Haswell.

Needless to say, high end gaming and desktop replacement laptops like the Razer Blade Pro (above) will still run hot when pushed and fans will spin up, but less jet engine-like cooling is required and designs can be slimmer than ever before.

A hugely positive side affect of Haswell is it will debut alongside Intel’s upgraded Ultrabook specifications. We have already touched upon the new battery life requirements, but manufacturers hoping to gain the Ultrabook seal of approval from this point forward must also produce models with touchscreens and WiDi. 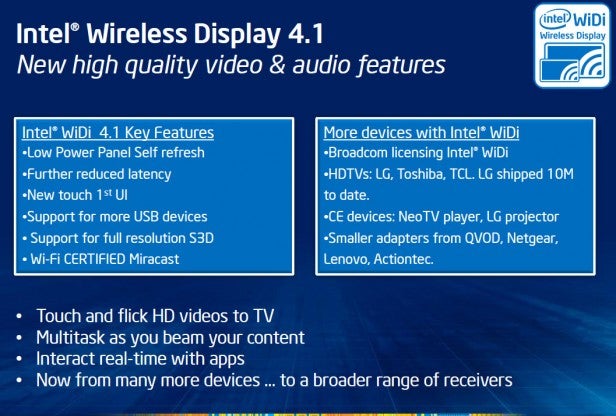 The former is predictable (especially with the battery life to more than counter the drain of touch), but the latter is particularly interesting. WiDi (Wireless Display) has struggled for uptake since it was introduced more than two years ago, but mandatory inclusion could send WiDi into the mainstream much as mandatory inclusion did for WiFi in Intel’s first Centrino-based laptops.

WiDi also now supports MiraCast, the open wireless HD video and lossless audio streaming standard and alternative to AirPlay. MiraCast has been built into Android 4.2 builds onwards and just this week Microsoft announced MiraCast will be a part of Windows 8.1. Look out Apple.

Lastly, Intel will also push for ‘perceptual computing’ to be a part of Haswell Ultrabooks from 2014. In plain English this means facial, gesture and speech recognition, which opens the way for Ultrabooks to mimic both Kinect and Siri. It would also undoubtedly come in handy for integration with Google Chrome’s new voice search.

Too good to be true? There are some caveats…

And yet, despite all these plus points, Haswell isn’t without its faults. Perhaps most disappointing is the huge focus on mobile means Haswell doesn’t really push the envelope for high end desktop computing and it promises only minimal gains in processor performance over Ivy Bridge.

These CPU limitations are also felt in its mobile iterations. Intel quotes a 10-15 per cent performance increase on Ivy Bridge processors clocked at the same speed, which is hardly earth shattering. That said we never found Ivy Bridge to be particularly slow.

The other concerning aspect to Haswell is pricing. In bulk Intel is retailing flagship Haswell Core i5 and i7 chips for $342 and $454 respectively compared to just $250 and $346 dollars for the equivalent chips in Ivy Bridge.

While Intel is keen to push down Ultrabook prices, it looks like higher end Ultrabooks are more likely to rise in price than fall. Certainly the examples we have seen so far push top end Ultrabooks close to MacBook Air territory, though Apple’s entire Mac range due to be announced at WDDC this month could also be affected by the move to Haswell.

There is also some concern that Haswell could be the chip to finish off AMD and while Intel’s long term rival is readying new chips of its own, with enough marketing that could be the case. Intel’s fight with ARM is clearly its main focus these days, but the lack of any real rival in the laptop and desktop space would surely slow innovation there. 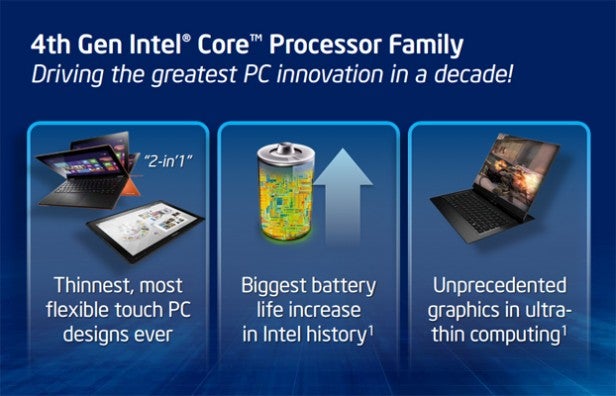 Wait to buy or get a deal now?

Ultimately, while Haswell does raise some issues, they fall by the wayside compared to the huge technical strides it makes. In an ever more technologically mobile world battery life has been the a glaring shortcoming in our increasingly smart devices. The fundamental problems with battery technology remain, but Haswell is a wonderful way to paper over its cracks.

Furthermore if battery life isn’t crucial there should soon be some remarkable deals to clear the inventory of Ivy Bridge PCs, especially if you’re looking at the cheaper end of the laptop market where ultimate performance is less vital. For everyone else, Haswell-based devices will start shipping during Q2 and with review models due with us shortly we fully expect a game changer.