As part of a busy day of announcements Sony announced the new Sony A7 and A7R – two new cameras that look set to cause a stir in the high-end digital camera market.

The pair of new models are, according to Sony, the world’s smallest interchangeable lens cameras featuring full-frame sensors, and form part of a revamp to the manufacturer’s flagship series.

We were on hand at the UK launch of the A7 and A7R to take a closer look at the two new models.

Sony A7 and A7R: Design & Features

Sony had promised a big announcement and it didn’t disappoint. The Alpha 7 and Alpha 7R full frame compact system cameras were finally made official after a prolonged build-up and several leaks, and the pair certainly make a big impression

Essentially, Sony is combining the best features of its two popular product lines into one new beast: the performance of its high end Alpha DSLR style cameras with the compact size of the NEX. The cameras, which both use the same E lens mount as Sony’s NEX cameras, will be branded as ‘Alpha’ – Sony has decided to call it a day on its NEX branding.

The Sony A7 and A7R are almost identical in both design and specification, both weighing in at just over 400g – remarkably light for a full frame camera. In fact the new models are smaller and lighter than many consumer DSLRs that feature smaller APS-C sensors – a remarkable feat of miniaturization.

The cameras have been given a minimalist, angular design that is likely to divide opinion – some may say it looks unfinished or, according to one commentator, designed with a ruler – while others will love its unfussy, business-like, professional feel that could almost be described as industrial.

The Alpha 7R features a weather-sealed magnesium alloy construction while the Alpha 7 is made from a combination of magnesium alloy and polycarbonate, though it doesn’t feel that different in the hand. Both cameras feel very robust and able to take the knocks.

The Alpha 7 and 7R are designed for photographers that like to take control – both feature a comprehensive selection of customizable, direct input buttons, minimizing the amount of time that photographers will have spend scrolling through the menus.

There’s a textured handgrip that, while shallower than that on the average DSLR is in keeping with the generally smaller form factor of the cameras, but if that isn’t big enough there will be an optional vertical grip available that will also hold additional batteries for extended shooting.

The real highlight of the new cameras is their sensors, and this is the one area in which the pair differ.  Both feature full-frame Exmor CMOS sensors, but the resolution differs with the A7 featuring a 24.3MP chip incorporating 117 on-sensor phase detection AF points to complement its 25 contrast detection points, to offer what Sony calls Fast Hybrid AF which, the company claims, is faster than a high end DSLR in certain shooting situations. The focusing certainly felt very quick in our brief demo, with little hunting in the indoor location in which we were given the opportunity to try it out.

The A7R on the other hand sacrifices AF speed for resolution, with a substantially more pixel-populated 36.4MP sensor that offers contrast detect AF only. Although it still seemed to focus pretty quickly, especially compared with many other CSCs, it doesn’t seem quite as decisive as its less resolute sibling.

With a similar pixel count to the sensor used in the Nikon D800, comparisons will be inevitable and it does offer a number of new features. Chief among them is Sony’s ‘gapless on-chip’ design, which is essentially makes light collection more efficient by eliminating the gaps between adjacent pixels.

Sony has also sacrificed the optical low-pass filter on the Alpha 7R. This is a built-in feature for most cameras that reduces the occurrence of moiré – the wavy pattern that can occur in an image that includes a great deal of repetitive detail, such as thin stripes.

Excluding it allows the sensor to take full advantage of its resolution potential, as anti-aliasing filters do reduce sharpness. Sony is no doubt hoping that the extremely high resolution of the a7R will be enough to simply bulldoze through a moiré-prone situation.

Sony A7 and A7R: Sensors

The difference between the sensors on the two cameras means that while the Alpha 7 is the more suited to street photography and general shooting, the Alpha 7R will likely be the preferred choice for static subjects such as landscapes and perhaps studio photography, where the highest resolution is required.

Taking advantage of the full-frame sensors requires a powerful processor, and accordingly Sony has opted to include in the newly designed BIONZ X, which it claims will offer three times the speed of any previous BIONZ engine.

Finishing off the high-end specification is a range of features that include Wi-fi and NFC connectivity, and an impressive feature set for video shooters. As well as full manual exposure and audio level control, there are ports for external mic inputs and headphone ports. For high end users they also offer clean HDMI output and XLR compatibility. The new cameras are clearly being targeted at the HDSLR video pro and semi pro user as well as the stills photographer. 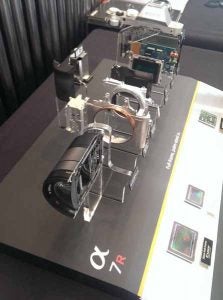 Although the two new Alphas offer the same E mount used by the NEX system, those lenses are not designed for full frame, so their use will result in strong vignetting in the corners. They can be used on the 7 and 7R with an adaptor, but will produce images cropped from the sensor at a reduced resolution of 10MP and 16MP respectively.

First impressions of the new Sony Alpha 7 and 7R are very positive. Sony has produced what are by some margin the world’s smallest and lightest full frame interchangeable lens cameras, both of which feel extremely well made and feature different but equally ground breaking features that should appeal to two different areas of the serious enthusiast and pro market.

For the specifications and build quality offered they seem very competitively priced, too – at £1,300 for the Alpha 7 body and £1,600 for the Alpha 7R body – putting them in direct competition with the two most affordable full frame DSLRs, the Canon EOS 6D and Nikon D610.

The Achilles heel of the cameras at the moment is lack of lens support, especially compared to its Canon and Nikon rivals, so Sony will have to work hard to deliver a comprehensive range of good quality optics as soon as possible, as promised.

Next, see our round-up of the best cameras of 2013